In the offseason, SU hired Tony White from Arizona State to implement a 3-3-5 defense in 2020, but the coronavirus pandemic stalled progress in learning the new system leading up to the Orange’s season-opener on Sept. 12, Babers said.

Most notably, SU is replacing Kendall Coleman and Alton Robinson — its top two pass rushers who combined for 8.5 sacks in 2019 — and at least five starters from the group that began the final game against Wake Forest last season. The secondary might be the strongest point on the Orange’s entire roster with returning safety Andre Cisco and corners Trill Williams and Ifeatu Melifonwu.

Below is part two of The D.O.’s analytical season preview, which highlights Syracuse’s defense and special teams, with data from Football Outsiders and collegefootballdata.com.

Turnover regression after a remarkable 2018 season

While better teams who are ahead will generally force more turnovers than worse ones or ones often trailing, it’s rare for a team to be consistently excellent in both turnover margin and points off turnovers. Syracuse had a +13 turnover margin in 2018, fifth-best in the nation. This was one season after finishing with 12 total takeaways in the entire 2017 season and a -12 margin. Syracuse’s 31 takeaways were not only extremely difficult to replicate, but its third-highest number in the nation inflated the quality of that 2018 Syracuse team by multiple points per game.

In 2019, the Orange forced 25 turnovers, which kept SU in multiple games that they otherwise wouldn’t have been in. The Orange finished 13th nationally with a +9 turnover margin. It’s unusual for a team who saw a one-year spike in turnovers forced to continue that into the ensuing season, but the Orange were able to force 12 fumbles and intercept 13 passes. If opponents take care of the football better, it could force the SU offense into longer fields. 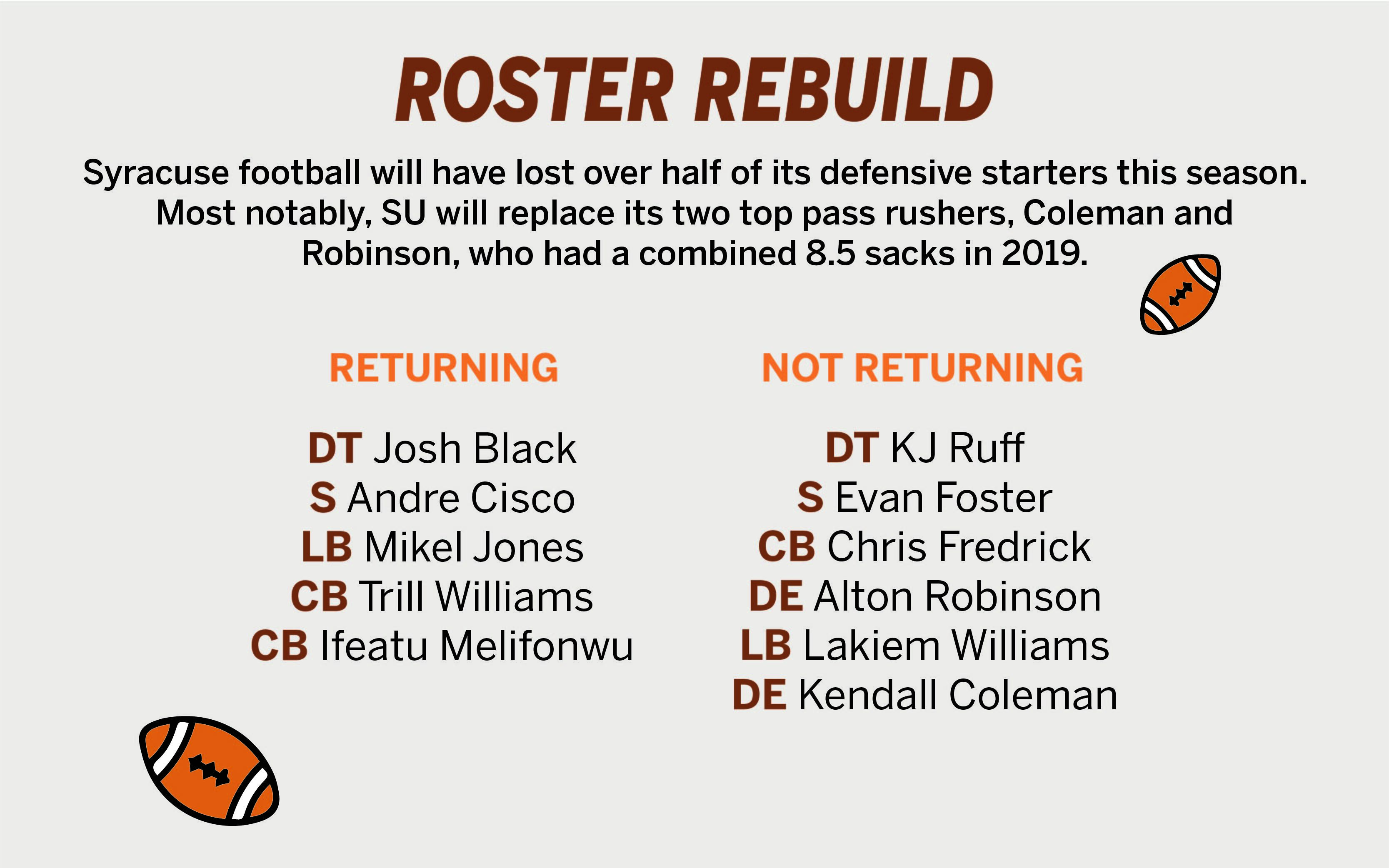 As Syracuse transitions to a 3-3-5 defense under Tony White, they’ll get an extra player on the field at arguably their best position group.

Syracuse’s defense was built to play with a lead in 2019, and the offense didn’t produce enough for the Orange to successfully play that way. The Orange were able to continue to turn teams over, an encouraging sign that they can potentially stave off regression in that category. SU was extremely vulnerable to the run in 2019, and switching to a 3-3-5 doesn’t necessarily help that.

Before leaving for Arizona State as cornerbacks coach and then defensive coordinator, Tony White was the Cornerbacks/Defensive Passing Game Coordinator at San Diego State, whose 3-3-5 defense has consistently been one of the best in the country in recent seasons. Their numbers are near the top in almost every category. SDSU ranked No. 1 in defensive line yards, No. 4 in defensive opportunity rate and No. 2 in stuff rate in 2019. Only one other team was able to stop a higher percentage of runs for either no gain or a loss. And 2019 wasn’t the only year SDSU was near the top of the charts in line yards and stuff rate, as the Aztecs were also near the top of the rushing defense rankings in 2017 and 2018. SDSU was middle of the nation in sack numbers, according to Football Outsiders. In 2019, ASU’s defense was No. 58 in defensive line yards, but struggled to generate pressure as they were 95th in sack rate.

Meanwhile, Syracuse’s defense was No. 104 out of 130 in defensive line yards and No. 101 in power success rate. The Orange had lost nose tackle Chris Slayton before 2019, and this year, there will be even more onus on NT Josh Black as he learns the 3-3-5 and is likely the primary nose tackle in the middle of the defense. How well he does against double-teams will be one of the most important factors in improving the SU run defense.

Syracuse’s secondary is its strongest unit defensively, with All-American Cisco and big corners Williams and Melifonwu on the outside. Cisco said that multiple players have been sharing time at the “rover” role, which is the extra member in the “5” of the 3-3-5 defense.

Syracuse’s 9.1 penalties per game was a few ticks behind FSU at 9.3, but this is a recurring trend since Babers arrived at SU. In three of the past four seasons, the Orange have been on the top 20 for most penalized teams. Only in 2017-18 did the Orange not finish near the top of the national list in penalties. Against Holy Cross last year, two players were ejected for targeting. When Babers was asked about it last season, he didn’t cite inexperienced players.

“That’s the thing that’s troubling,” Babers said last November. “We’ve got too many older guys having penalties, and we can’t have that with them.”

If Syracuse wants to improve its record in 2020, the efficiency inside both 20-yard lines cannot be near the bottom of the list nationally

SU’s offense had 46 red zone trips last season, per cfbstats.com, and scored on 35 of them. That 76.09% metric ranked 110 out of 130 FBS teams offensively, and the 24 touchdowns ranked them 103rd in red zone TD efficiency. Most SU fans remember when the Orange came up empty on back-to-back possessions in a 17-6 game against Clemson during the third quarter. A 3rd down stop and a DeVito interception turned what could have been an SU lead against the defending national champions into a 41-6 defeat.

Syracuse’s defense was above average in overall red zone efficiency in stopping opponents from scoring, but when those opponents did score, it was too often for touchdowns. The Orange were 99th in touchdown prevention rate. In 2018, SU was 21st in offensive red zone efficiency and 20th in defensive touchdown rate. The Orange gave up plenty of yards in 2018 but managed to hold teams to field goals more often than not. In 2019, Syracuse couldn’t keep enough teams out of the endzone.

While the Orange struggled on both offense and defense, their special teams was once again one of the nation’s best.

According to Bill Connelly’s SP+ ratings, the Orange had the best special teams unit in the ACC and the fifth-best in the country.

Football Outsiders also has a metric to judge how valuable special teams are on a per possession basis. According to their numbers, Syracuse was fifth in punting efficiency. The Orange could do better to improve at punt returner with the departure of Sean Riley. Even though Riley had plenty of punt return volume for SU, he was No. 115 nationally in punt return efficiency. Most of SU’s efficiency in special teams came from punter Sterling Hohfrichter and kicker Andre Szmyt. Hohfrichter isn’t returning in 2020, after being drafted by the Atlanta Falcons in the 7th round, and Szmyt wasn’t as effective in 2019 as he was in 2018 when he ranked 12th in kicking efficiency and won the Lou Groza award. Even still, he ranked in the top half of the country in field goal kicking last season. 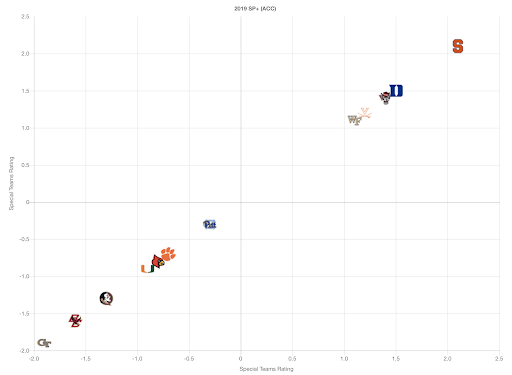 Without improvements on defense, in the red zone and a cleaner game penalty-wise, Syracuse could inch down the same path toward a losing season in 2020.