Since then, though, many of the Orange’s players’ concerns about playing football in 2020 have faded as the season-opener against North Carolina on Sept. 12 nears. But that comfort shouldn’t take away from the underlying truths: The NCAA has already canceled fall championships and multiple conferences have canceled fall football. The ACC’s risk of sending athletes up and down the eastern seaboard is extraordinary. Money, not safety, is still driving the decision-making.

John Wildhack said on Tuesday that Syracuse still plans to compete in sports this fall. That means Syracuse football players — who have largely been separated from groups outside of themselves and not exposed to the coronavirus in at least six weeks — will take an airplane to Chapel Hill, North Carolina to play football against the Tar Heels on Sept. 12. They’ll abandon their bubble for another one that just popped.

UNC has already closed its campus and went fully online because of a large coronavirus outbreak — recently reporting a 31.3% positivity rate among tests that had been completed. Head coach Mack Brown suggested that the campus closure is a competitive advantage and a “better seal around our program,” showing where the balance truly lies in the “student-athlete” term that the NCAA has used for decades.

The ACC isn’t MLB. Its athletes aren’t professionals. And SU can’t reasonably leave its own bubble while still claiming to fly under the flag of amateurism.

High-level college football has long exploited athletes who receive zero financial compensation from their schools while bringing in millions of revenue dollars each year. Now that the schools and athletic departments are facing cutbacks on teams, scholarships and staff, college football is facing a potential revenue disaster if there’s no 2020 season. No fans are bad enough. No TV revenue could be armageddon.

So now, under the failing facade of amateurism and supposedly putting athletes’ safety and health first, multiple Power 5 conferences, including the ACC, are going to try to play football this year.

For Syracuse, that starts in Chapel Hill. New York Gov. Andrew Cuomo still has North Carolina on the mandatory 14-day quarantine list for any person returning to New York. Syracuse University has mandated that students sign a “Stay Safe Pledge” and not leave the central New York region, yet athletes have been exempted from this part of the pledge.

If an ordinary SU student took that trip to North Carolina, they could face disciplinary action or suspension. For SU athletes, they’re on official school business.

“University sanctioned travel will include added safety precautions to protect the health and well-being of our students, as well as our broader community when they return to campus,” Vice President and Chief Communications Officer Jeff Stoecker said in a statement to The Daily Orange on July 15. “We expect that any student who travels away from campus will respect and uphold the spirit of the pledge.”

As much as Syracuse head coach Dino Babers likes to call Syracuse’s traveling contingent on a “contained bubble,” that’s not actually possible. Wildhack said on Tuesday that the ACC hasn’t yet finalized a COVID-19 testing protocol outlining how many times per week athletes will be tested and how close to athletic competitions these tests will occur.

Syracuse athletes are currently being tested weekly, and that will rise to three times weekly starting Sept. 7. There’s inherent risk in taking an entire football team plus essential staff down to a COVID-19 hotspot, and the Orange will make four trips in 2020 to states currently on New York travel advisory. 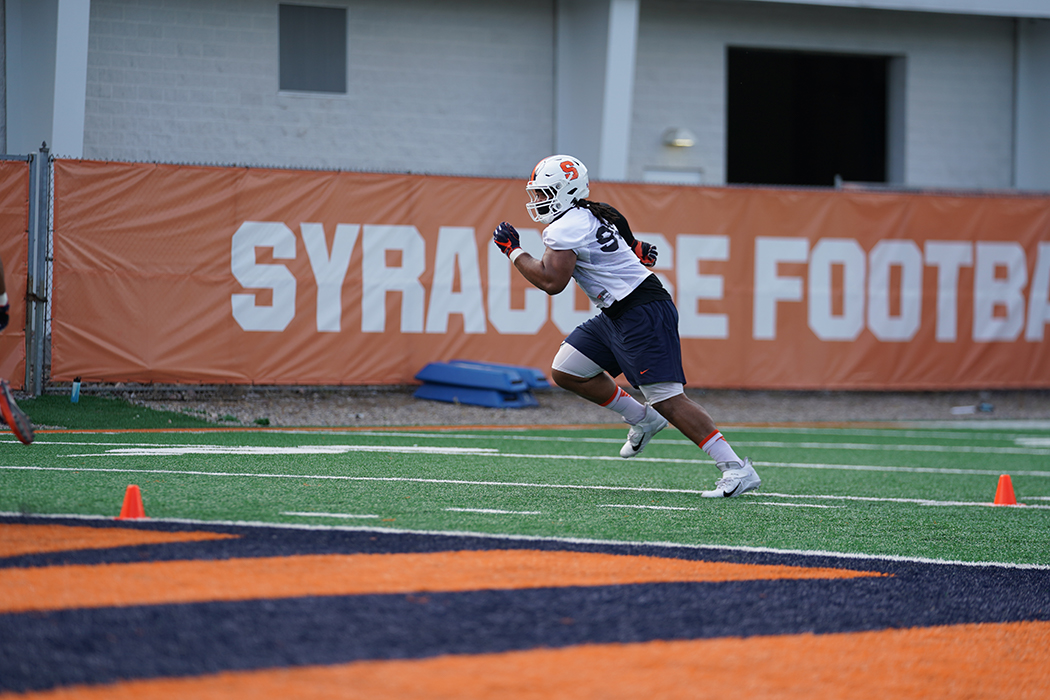 Syracuse football players sat out four training camp practices over testing concerns at the university and across the ACC. Courtesy of SU Athletics

SU Athletics and more importantly, its athletes and staff should be commended for developing and following safety protocols that have kept coronavirus cases so low among athletes. As multiple schools around the country had to cancel workouts due to COVID-19 clusters, Syracuse kept its numbers down, as we finally learned when Wildhack released the testing numbers on Aug. 14. Five positive total tests, zero active cases and more than 1,750 tests completed.

It shouldn’t have taken that long to release data, and more transparency from SU Athletics could’ve gone a long way toward improving the chances of college football this fall. No one asked for specific names, but the school owes it to the community — and other colleges nationwide — to inform them of how safe or unsafe the operation is.

In June, Wildhack called the number of positive tests a “news item” and said that Syracuse would not be releasing any information about positive test results. For all of June, all of July and half of August, Babers praised SU’s protocols and his players and said they’d “be in the final four” of top schools on testing.

“They don’t have to give out their numbers,” Babers said of SU on Aug. 10. “I’m falling in line with the rules of Syracuse University being a private university and not having to spit those numbers out.”

When Wildhack was asked Tuesday why SU Athletics changed course and released the numbers on Aug. 14, he cited coordination with the university-wide COVID-19 dashboard, which launched a week prior to the release of SU Athletics’ testing numbers.

Coincidentally, Wildhack decided to release the numbers one day after SU football players sat out practice after a miscommunication in testing protocols and ESPN’s morning show “Get Up” ran a segment where popular commentators Mike Greenberg and Paul Finebaum criticized the school for its handling of testing of athletes.

Syracuse quarterback Tommy DeVito said on Tuesday that he’d like to see schools release the results of their testing protocols. He’s not asking for names. No one is. But the number of positives is important.

“But to have schools come out and say, ‘Alright, this was this week, there were zero postives and this many negatives,’ I think that would be good,” DeVito said.

College athletics, football in particular, has long exploited players for profit. The argument of doing ‘what’s best for players’ conveniently leaves out that the players are getting a pretty raw deal — forced to comply with NCAA rules while not profiting a dime — compared to university executives, trustees, and decision-makers.

Some decision-makers have been more honest about the situation facing schools. When Iowa State Athletic Director Jamie Pollard addressed fans in a letter in July, he didn’t mince words or mislead. His honesty was refreshing in a time when colleges continue to try to hold off the inevitable tsunami of college athlete empowerment and incoming name, image and likeness rights for players.

“Some people have incorrectly framed the issue as safety versus revenue generation,” Pollard wrote. “The simple fact is that reality lies somewhere in the middle.”

If schools want to try to play college football this fall, they can. But let’s not forget about what’s really most important for schools, who’s really taking on all of the risk for none of the reward and how college athletics could be forever changed after this pandemic.