Senior quarterback Rex Culpepper took a sack when he absolutely couldn’t. Flushed out of the pocket and spinning back between the tackles, he looked desperately for an open receiver on third down, but he ended up in the Carrier Dome turf as the game clock ticked down into the single digits.

It was an inexcusable mistake by a fifth-year veteran, but it didn’t disqualify Syracuse yet. Each player sprinted to the line of scrimmage for one last shot to send a 36-29 game into overtime. With one second left, Culpepper took the snap and spiked it back into the turf. It was fourth down. Players put their hands on their hips and confusingly looked around.

Syracuse spikes the ball on 4th down, needing a TD to tie the game.

“If you have to go on fourth down, you’re going to have to throw the ball. Nobody wants to spike it on fourth down,” Babers said. “I don’t look at these plays. There’s people making mistakes, but one mistake didn’t win or lose a game. There was other mistakes made during that game, and people need to realize that.”

This season doesn’t count toward NCAA eligibility, but if this is it for Syracuse’s seniors, they’ll go out with Syracuse on the verge of its second one-win season since Ben Schwartzwalder took over in 1949. Against NC State (7-3, 6-3 Atlantic Coast), Syracuse (1-9, 1-8) took its first lead in 308 game minutes — since October — before spiking one final chance to tie it into the turf.

About 15 minutes after the spike, Culpepper and four other seniors prodded around Ernie Davis Legends Field. Any other year, they’d be taking their senior walk — a tradition Babers started — to greet fans, sign autographs and snap selfies. There would’ve been pregame player introductions for the seniors, family photos and roses.

But not in 2020. There were no fans to cheer for senior Nykeim Johnson’s 60-yard touchdown or groan when SU botched the final minute. Instead, a small convoy of family members met the team bus entering the Carrier Dome, but there were otherwise no special festivities for the 13 active seniors in SU’s 36-29 loss to the Wolfpack.

“That was the wives all getting together with the kids and some of their friends,” Babers said. “They knew that the seniors were not going to have any fans inside the Dome, and they organized it and got it all together, got out there with the signs and all that kind of stuff so the seniors could have something. Something that they could say they saw some people cheering for them one time.” 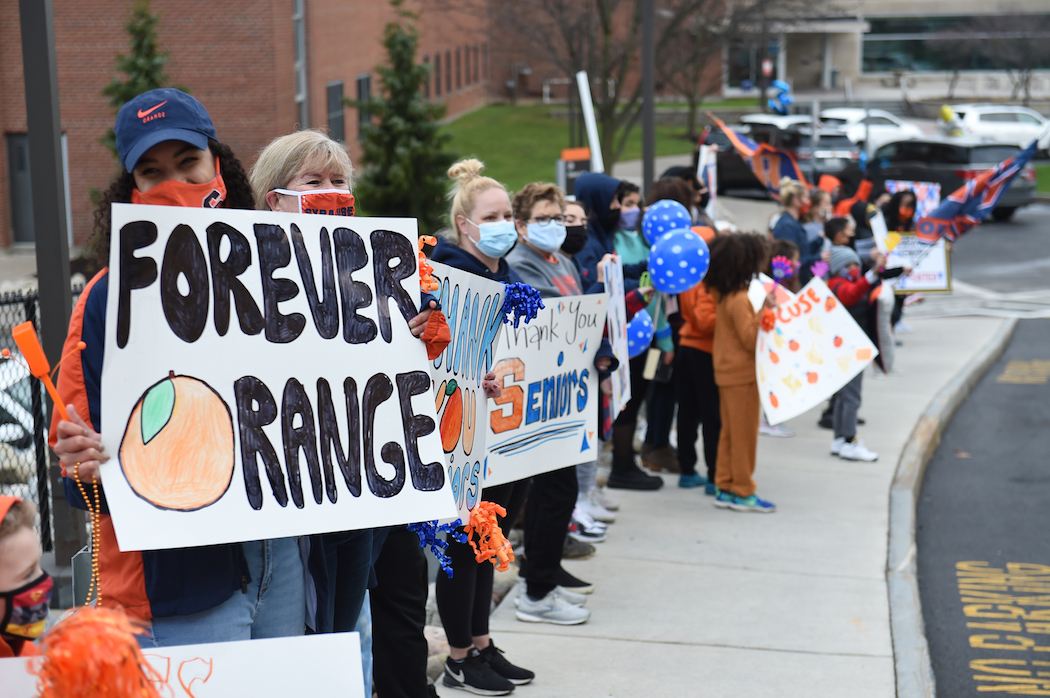 Family members of the football staff greeted the team bus as it arrived at the Carrier Dome for SU’s final regular season home game. Courtesy of Dennis Nett, Syracuse.com

The NCAA has granted everyone an extra year of eligibility, allowing seniors to return in 2021. The postgame lap for Culpepper, Airon Servais, Josh Black and Kingsley Jonathan may not be their last time stepping foot on the Dome turf.

Babers didn’t know if the lap was a sign the seniors had made up their minds about next year or if they just wanted to soak in the moment. No player has publicly committed to their plans. They’ve said they’re focused on this season and that there are many factors to consider.

As this season season wore on, injuries and opt-outs forced Syracuse to turn to less experienced players. Of SU’s active roster, 71.3% are in their first or second year of eligibility, the fourth-highest rate in the FBS. Five freshmen started on defense — a program record — for the third straight game.

Even with an unbalanced offense, the Orange played arguably their most complete game of the year. All three phases executed at various points — there was a kickoff return touchdown, a near-pick six and a forced fumble that turned a Wolfpack touchdown into an SU possession — and Syracuse entered halftime with a 22-14 lead.

Culpepper, though overextended, was doing his part.

On 3rd and 5 late in the second quarter, Babers and SU anticipated an NC State blitz coming out of a timeout. Culpepper rolled out to his left and let receiver Johnson streak down the left sideline, who won the foot race by at least five yards for a 60-yard touchdown. On the next play, Syracuse’s defense forced an NC State safety.

But the Senior Day magic mostly dissipated in the second half. The game turned when Syracuse clung to a 29-27 lead and Culpepper found Harris in stride for what would’ve been at least a 40-yard gain, but Harris let it slip through his hands. He bent over in frustration on the sideline and screamed “No” five times.

“Taj can play a lot better, too,” Babers said. “He left some meat out there on the bone. He knows how I feel about it. I want those guys to be able to catch everything, even though that may not be possible. It’s definitely possible. It may not be probable.”

Before the drop, Harris (career-high 12 catches for 146 yards) was having the best game of his college career. But after it, Syracuse’s offense gained three yards in its next nine plays. NC State scored nine unanswered, manufacturing scoring drives of 59 and 55 yards.

Then, Harris got his redemption. On the 10th play after his drop, a 3rd and 7 with about four minutes left, Culpepper lofted again to Harris down the right sideline. He tapped his foot inches inside the boundary for a 26-yard gain. Culpepper later extended the drive with a QB sneak on 4th and 1, and the magic was back. He scampered for 12 yards on a 3rd and 10 to bring Syracuse ever closer.

But on third and goal, with a chance to tie the game as the clock wound down, he took a costly 11-yard sack. The spike followed.

The sequence captured the impossible depths of Syracuse’s season, one that hasn’t been this low since Greg Robinson’s one-win 2005 season.

ACC-leading Notre Dame looms next week as Syracuse’s regular season finale. Saturday’s devastating loss, Senior Day or not, happened incident-free amid cancellations across the FBS. Syracuse and Boston College are the only ACC teams that haven’t missed any games this year, and SU football hasn’t reported any positive cases since returning to campus in the summer.

“I’m definitely thankful for having this season,” Black said Tuesday, “And the fact that everybody here is staying safe also, and we’re able to bond and play this season. Could be a lot of guys’ last season here. It’s just something that we’ve grown as a brotherhood all throughout my years here.”

The post Culpepper’s 4th down spike sends Syracuse to 1-9 in 36-29 loss to NC State appeared first on The Daily Orange.