Cody Roscoe’s mornings have recently begun with the same meal: steel-cut oats with blueberries, three strips of turkey bacon and three eggs with spinach, all prepped by his mom.

It’s a regimen that slightly differs from the one he strictly followed for 11 weeks while living 2,300 miles away from his Houston home. Less than a mile from the Ford Sports Performance (FSP) facility in Bellevue, Washington, Roscoe prepared oatmeal, eggs, fruit and a protein shake at 6 a.m. six days a week, repeating that same sequence for three months.

The exact location for Roscoe’s morning routine has slightly changed since he shined at Syracuse’s Pro Day on March 31. But the goal has remained the same: get into the best possible shape so he’s ready if a team calls during or after the NFL draft, set to begin Thursday night.

“Of course seeing my name go across the screen on draft day and me getting a phone call, it’d be a surreal moment,” Roscoe said. “In reality, certain things don’t go as planned. So I’m really just taking whatever it comes with and giving it my all.”

Roscoe is unlikely to be drafted but should secure a training camp invite, said NFL Draft Bible scout Jack Borowsky. Roscoe isn’t projected in CBS’ or The Athletic’s seven-round mock drafts, but he is quick and has a knack for getting to the quarterback, Borowsky said. His measurables — particularly his 40-yard dash time and short arms — hurt him in the scouting process, though. But to Roscoe, it’s the same validation process as when he proved himself at McNeese State and Syracuse.

“Whether I get drafted, free agent or anything, all I need is an opportunity,” Roscoe told The D.O. in December. “I feel like throughout my life, all I ever needed was just somebody to see me and believe in me and give me the chance to show them that wherever I’m at, I deserve to be there and I can play.” 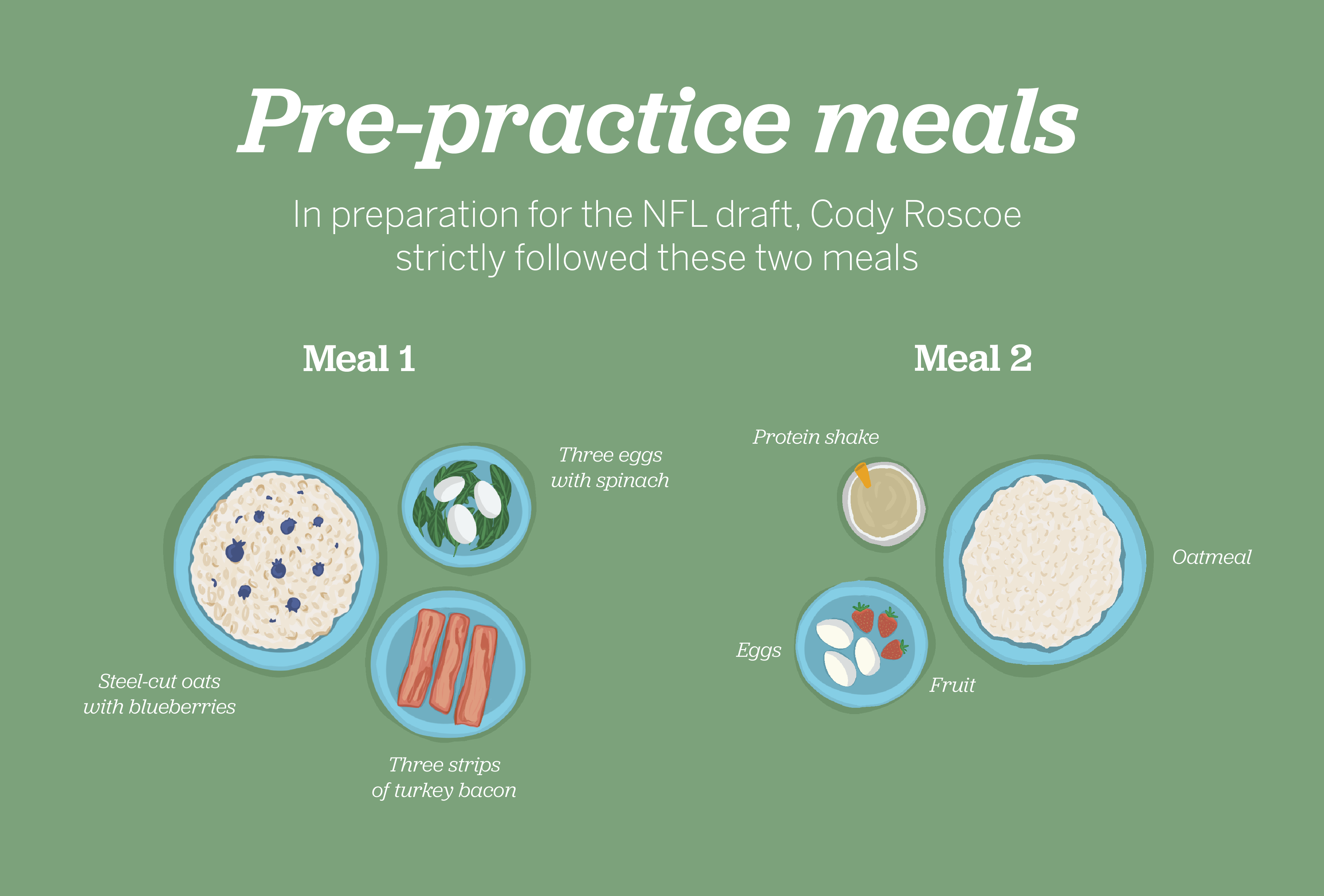 Days after Syracuse’s season finale, Roscoe focused on finding a place to train. He didn’t have to search far, as FSP, the same training facility several former SU players used to prepare for the NFL, reached out. On Jan. 1, Roscoe flew out to begin training in Bellevue.

The results have been clear to Roscoe, who said he’s now in the best shape of his life. It was the weeks of speed training, lifting and on-field workouts with NFL and college stars that helped Roscoe get one step closer to his dream, despite always being considered an underrecruited and undersized player.

FSP’s CEO, Tracy Ford, has trained current and future NFL players for years, running pre-draft sessions with an assortment of players who, like Roscoe, hope to hear their name called during draft weekend.

Ford’s pitch to Roscoe was simple: look at the successes former SU players achieved after training at FSP. He told Roscoe that he would achieve the same results if he flew to the other end of the U.S. and put the same type of work in.

“If a guy is coming from Syracuse and he’s trying to come all the way across the country to Seattle to do pre-draft, we know we’re going to get a grinder and we knew we were going to get a guy that was gonna get results,” Ford said.

Zaire Franklin, now with the Indianapolis Colts, began the Syracuse to FSP pipeline in 2018, and he suggested it to Eric Dungey. Alton Robinson and Lakiem Williams also trained with Ford before their respective NFL drafts, and Roscoe said his decision to follow was a “no-brainer.”

“If it worked for them, I know it can work for me,” Roscoe said.

Roscoe’s main weakness was his speed, specifically his 40-yard dash time, he said. As a defensive lineman, Roscoe rarely had to run long distances. He needed to improve his top-end speed, focusing on lifting his knees high over and over through the last 20 yards of the sprint, Roscoe said.

He would practice getting in his stance, his first step, the driving phase (the first 20 yards where a runner keeps their head and upper body down), his top-end speed mechanics and his mobility every day at FSP. There were also two mock NFL combines during the training period where Roscoe ran a 60-yard dash. Closer to the pro day, Ford put him on a bungee to work on overspeed training.

When his mom, Natieka Washington, saw Roscoe at his pro day — where he posted a 4.8 40-yard dash — it was the fastest she’d ever seen her son run. Roscoe said he’d never finished under 4.9 seconds before the pro day, joking about the slower times he posted when he first got to FSP. “Oh yeah, it was bad,” he said laughing. Ford preached patience to Roscoe, telling him that when his body was ready, Roscoe would hit a personal-best time on pro day.

It wasn’t just the speed that impressed Washington, though. Roscoe was focused on maintaining his weight while at FSP, and the intense training schedule caused him to lose body fat and gain muscle mass. After coming back home to Houston and trying on a pair of jeans, Roscoe couldn’t fit into his old clothes — despite weighing roughly the same amount.

If a guy is coming from Syracuse and he’s trying to come all the way across the country to Seattle to do pre-draft, we know we’re gonna get a grinder.

Roscoe followed the same workout plan that transformed Franklin’s body. A typical day for Roscoe began with breakfast at 6 a.m. before entering the facility for “prehab” at 8 a.m. for stretching. An hour later, the group began speed workouts, stretching for an hour or two before a snack break, a lift session and lunch. Then, they headed to the field for pass rush drills with Cliff Avril, a former Pro Bowl defensive end with the Seattle Seahawks. And stretching and mobility work — alongside physical therapy and an ice bath — finished the day off.

All his work helped Roscoe post 33 bench press reps — more than any player at this year’s NFL Combine — and set personal-best marks on his broad jump, too, during his pro day. Ford called it a “phenomenal performance” that matched the numbers Roscoe had posted toward the end of his time at FSP. Roscoe was disappointed in his bench press, however, telling Washington afterwards that he could’ve hit 38-40 reps but lost his focus while people were yelling. 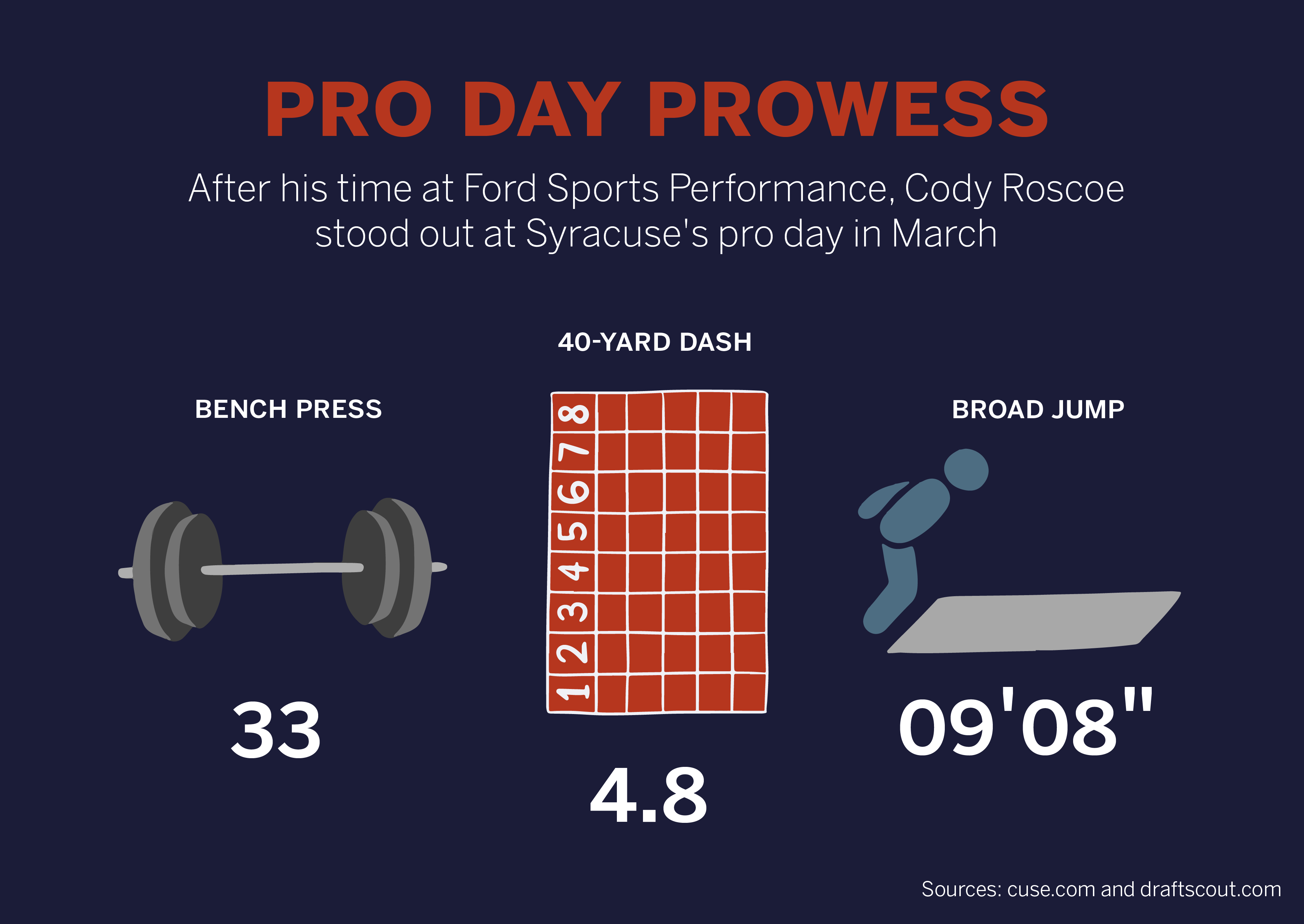 After the pro day, Roscoe and his mom sat in the car and called his high school coach, Stephen Dixon. Roscoe told Dixon that he wanted to ensure either his number gets retired or they name the Heights (Texas) High School field after him. “Man, if you make it like I think you will, I’ll do both. I’ll retire your jersey and name it after you,” Dixon said.

Years earlier, Dixon moved Roscoe from middle linebacker to defensive end because of his “natural” pass rushing abilities. The way Roscoe used his hands on swim, rip and counter moves, along with the way his hips turned, stood out to Dixon. The position change “unleashed” Roscoe, whose 23 sacks marked one of the highest totals in the state of Texas his senior year.

Dixon knew there was something special about Roscoe. It’s why he told him in eighth grade that he could be an NFL draft pick, told him throughout high school that he had a pro-level skill set and why he sat down with him during his junior year of high school to say he had a chance to play on Sundays.

“He kind of looked at me crazy during that time, but it looks like that dream may come true,” Dixon said.