In a normal year, SU men’s club hockey would be in the middle of tryouts by the first week of class. Recruiting starts as soon as students begin returning to campus, and a roster is set by the end of the week.

Instead, Director of Operations Bridget Essing is trying to figure out how to manage a semester without practice and games. The team was not given clearance by the university to practice or compete, meaning for the first time since its founding in 1959, there will not be a club hockey season at Syracuse.

This is the reality that the 50-plus club sports at SU are facing this semester. Teams that SU determined could social distance properly — including baseball, softball and primarily individual sports — are able to practice, but everyone else is limited in what they can do.

In a July 27 email to club sports presidents, director of recreation Matthew Hackett said that “small group, no-contact physical conditioning,” with no more than 10 members would be permitted. For many teams, that means less than half of its athletes can condition at a time.

Sports that are allowed to operate this fall must follow the Stay Safe Pledge by wearing masks and social distancing during practices and competitions, Hackett said. In accordance with the pledge, clubs are not allowed to leave central New York to compete and SU will not be hosting any club sports competitions.

“Should guidance change, we will notify you immediately to begin discussions on resuming regular activity,” Hackett said in the email.

Like ice hockey, roller hockey is not able to practice this fall outside of 10-person conditioning. Its practices are held indoors, and even while wearing masks, it is difficult to maintain social distancing while skating.

Despite not being able to practice properly, the management team is thinking of ways to keep players together during the semester. The social distancing and mask mandate will make it hard for the team to practice shooting on goalies, though, recruiting chair Ethan Clearfield said.

“We brought some outdoor wheels, so we’ll just kinda skate around campus, try to get together as a team, do some passing,” Clearfield said.

One team that hopes to play this fall is club curling. Outside groups are not allowed at Tennity Ice Pavilion this year, so the team will have more time available for open practices on campus. However, the Utica Curling Club, where weekly practices are usually held, has yet to determine if it will open this year — and President Chris Lorenz doesn’t know if he wants to risk driving the team an hour away to practice every week. 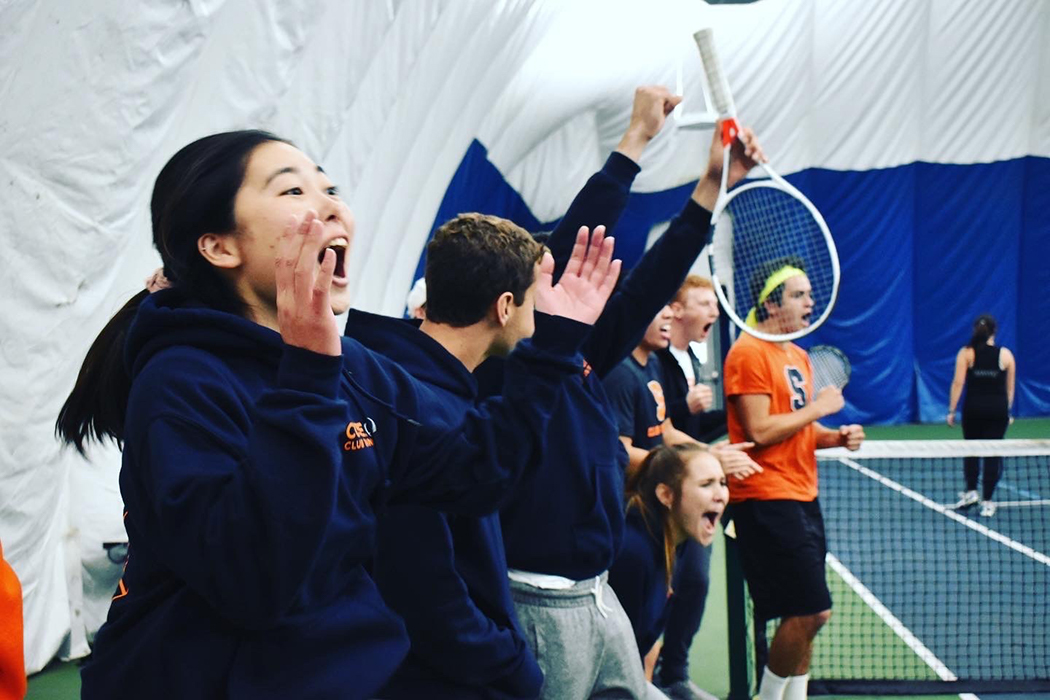 While they were cleared to play this semester, Lorenz doesn’t know how new circumstances may affect recruiting. The sports club fair will be held virtually this year instead of on the Quad like past years.

“No one really knows about the club, coming in saying ‘Oh I want to do curling,’” Lorenz said. “It’s just kind of something where (people) saw curling and thought ‘Oh that could be fun.’”

In place of competitions, SU will be playing against other schools in online curling games. Even without physical competition, Lorenz said he enjoys the social aspect of being able to interact with other teams, even if it’s virtually. National championships are still scheduled for March 7-14, and he remains optimistic that they will be able to compete in-person by spring.

Even spring sports like men’s volleyball have been affected by a lack of practices. The team usually has tryouts near the beginning of September, with practices and small tournaments held throughout the fall to prepare for a full spring season. Now, they’ll be lucky to hold tryouts at all, captain Eric Lee said. He’s trying to have practices in the fall and is working with club sports supervisors to plan outdoor practices for smaller groups.

“In the spring, everyone already found their niche,” Lee said. “So we always have tryouts in the fall.”

The SU club tennis team needs to follow the United States Tennis Association’s rules in addition to the university’s COVID-19 guidelines. While SU said the team could operate this semester, the USTA canceled all events in the fall and has given no indication if they will continue in the spring. Team captain Ryan Arbogast said they are hoping to have tryouts and practices in small groups at outdoor tennis courts.

“All the events were canceled about a couple weeks ago with no goal of moving or postponing,” Arbogast said. “I don’t think (we’re) necessarily a priority when things like the U.S. Open are going on.”