Buffalo missed just four field goal attempts in the second quarter against Syracuse on Nov. 22. The Bulls went a perfect 6-for-6 on 3-pointers, and three came within a 74-second span.

But Syracuse was still in the game. The Orange shot 9-for-14 from 3 in the first half, with Chrislyn Carr accounting for four of those makes. She was perfect from deep that half, helping counter Dyaisha Fair’s seven 3-pointers for Buffalo.

With Syracuse trailing early in the second quarter, Fair’s overhead pass was intercepted by Alaysia Styles, who immediately sent the ball forward to Christianna Carr on the fast break. At the center of the court, Christianna sent a long pass to a surging Chrislyn who was stopped on the perimeter by the Bulls’ press but found a window to sink a 3, pulling the Orange within a point. It sparked an 8-0 run that gave SU its first lead just over two minutes later.

Chrislyn’s success against Buffalo was the start of four games where she scored at least 20 points. She’s been Syracuse’s (76-4, 11-1 Atlantic Coast) most effective shooter from deep with a 40.7% 3-point field goal percentage, ranking 350th nationally among players with at least 25 3-point attempts, per Her Hoop Stats. Chrislyn leads the team in total made field goals with 65.

“Chrislyn is really evolving into this system here,” acting head coach Vonn Read said. “She feels comfortable playing off the ball. She’s getting a lot of passes that are coming to her now. She’s driving close-outs instead of just having the ball all the time in her hand.”

At 5-foot-5, Chrislyn is Syracuse’s shortest player, but she makes up for her size with her speed. The Orange average 17.9 fast break points per game, and Chrislyn’s role in their transition game has been essential for their recent offensive success. 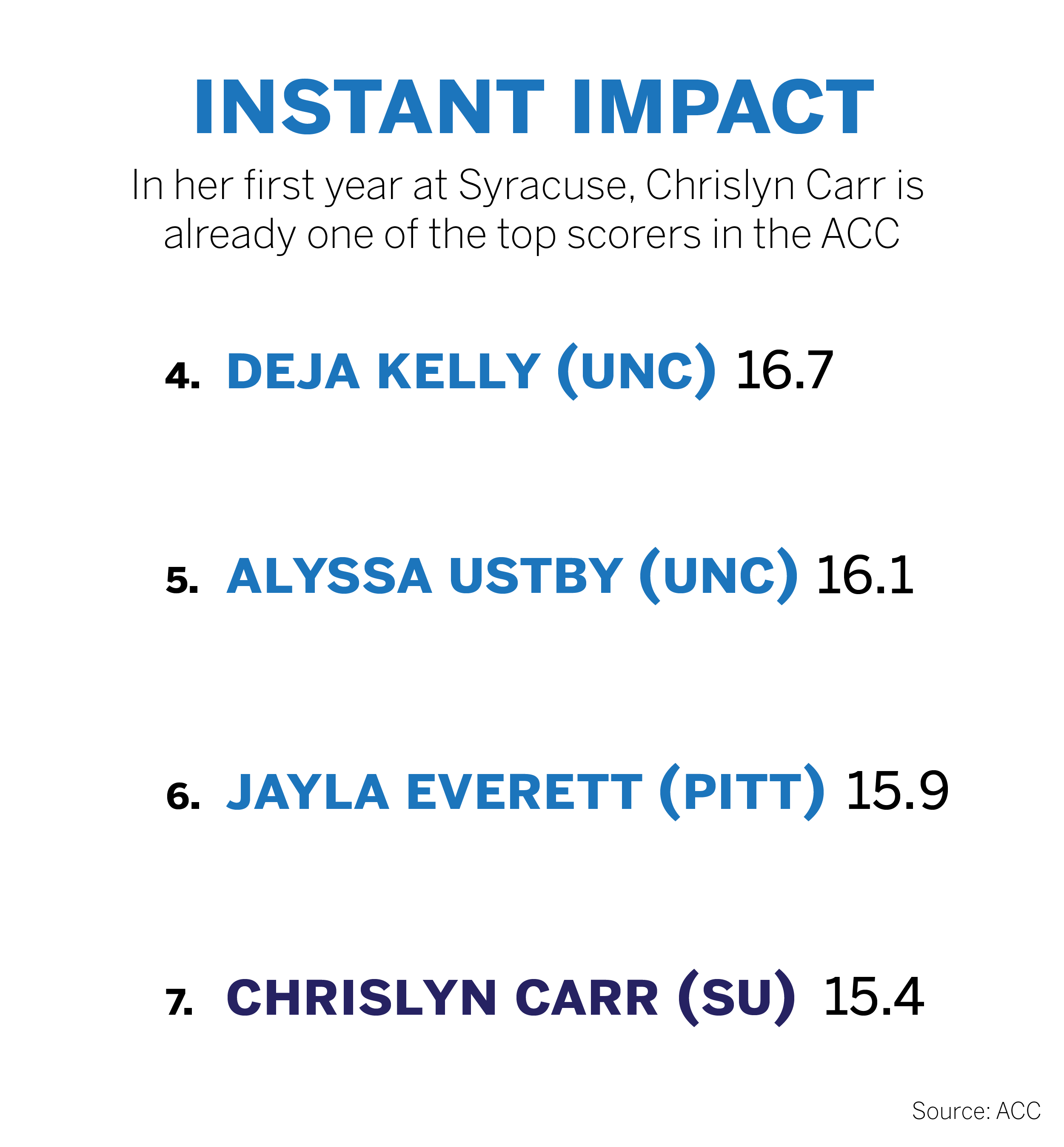 Read initially designed Syracuse’s offensive scheme around the team’s speed, but SU’s increased success rate from the field has led the first-year head coach to change his strategy to a 5-out look emphasizing shooting. Before the Orange’s tilt with then-No. 23 South Florida, Read implemented the motion offense that relies on moving the ball toward the arc’s perimeter to generate more shots. Syracuse’s starting five features four guards, allowing for more flexibility and free-form movement inside the paint.

“We don’t really have a player that we can just throw the ball inside (to),” Read said. “What we’ve been working on is spreading teams out and attacking and driving and opening up lanes. We do have players that can break people down 1-on-1, and we do have shooters.”

Syracuse attempted 27 3-pointers against South Florida but made just seven for one of its worst conversion rates thus far. It turned out to be a similar conversion rate for Chrislyn, who shot just 3-for-11 from the field without hitting a single 3.

Chrislyn has recorded double-digit points in each game since. She has found her niche by positioning herself in the left corner of the offensive zone — the “4” spot of the 5-out offense. Chrislyn has still managed to be a key factor in the paint, becoming a prime layup target, especially on the fast break or in quick transition plays.

But the Baylor transfer has also been consistent from 3 and has become the favorable target for Syracuse’s kick-out passing plays, particularly from Teisha Hyman. Chrislyn and Hyman have connected on 10 field goals within the last four games, including four in the Orange’s blowout win over Central Connecticut State.

“(Chrislyn’s) been great,” Hyman said. “We’re just trusting each other more and more every game, and I know she’s going to play hard.”

Against then-No.18 Ohio State, Chrislyn was one of three SU players to score at least 20 points, leading the Orange to a 97-91 upset win. She equaled her season-high of 23 points, and did so shooting just 1-for-6 from deep, her second-lowest 3-point percentage of the season. But Syracuse drew 19 personal fouls, and Chrislyn took 14 of the Orange’s 26 free-throw attempts, missing just two.

Chrislyn’s ability to shoot under pressure has been an underlying strength since her freshman season at Texas Tech, when she was named Big 12 Freshman of the Year. Over a 32-day span, she recorded 26 straight free throws, shooting a perfect 6-for-6 from the line in two games.

Syracuse is in the midst of a five-game win streak, and Chrislyn has stepped up when needed, like in the Buffalo game where she converted seven turnovers into field goals. While she made her impact early on against the Bulls, she took over against Ohio State in the fourth quarter, scoring 22 points.

At the start of the fourth quarter, the Orange led by seven points, and Chrislyn had only registered one point before she added 22 points, a program record for points in one quarter. With seven and a half minutes left, as Hyman missed a 3-pointer, Najé Murray dove to secure the rebound, falling backwards to keep the ball in play. She dished it off to Chrislyn, who sank a layup, giving the Orange a 71-61 lead, their biggest of the game.

“This is her game. You get her in space, and she’s tough for anybody to guard,” Read said.