A few minutes after practice ended on a Wednesday afternoon in late March, Brendan Curry stood in the Ensley Athletic Center lobby and admitted with a laugh that he often gets “hangry”.

Like many college students, Curry — the four-time All-American and a future Premier Lacrosse League player for Atlas Lacrosse Club — gets hangry. Tucker Dordevic said Curry will get “pissed” when he hasn’t eaten.

“You can basically know if he’s annoyed or something, it’s like ‘Dude, are you hangry?’” his dad, former SU player Todd Curry, added.

Cooking has become Curry’s solution to his hangriness. It started out of necessity during his sophomore year, but has since developed into a passionate hobby.

“My friends know that when I get hungry, it’s game-over for any sort of conversation or I’m very snappy,” Curry said in late March. “Usually when I’m cooking, (it’s because) I’m hangry, so they go hand-in-hand.”

The former SU midfielder runs an Instagram account called “the.hangrychef”, where he posts photos of various meals he made from scratch. The account has over 750 followers, though Curry is adamant that cooking is only a hobby, secondary to lacrosse. But it’s one that he enjoys and is really good at, those close to him say. He said it’s furthered his relationship with his mother, Erin Curry, who also shares a love for cooking.

“I think that the interest is genuine,” Todd said in late March. “He likes it and I think he’ll always get better and better at what he does.”

When Curry was younger, the family was always in the kitchen — the centralized area of their house — while Erin cooked, Curry said. Todd said Curry’s passion stems from his mother.

Curry began cooking while attending Calvert Hall (Maryland) College High School, trying to put on more muscle for lacrosse season, Erin said. Mainly, he made his own eggs and pancakes in the morning.

But cooking didn’t fill a bigger role in his life until his sophomore year at Syracuse while living in a South Campus apartment. For the first time in his life, he had his own kitchen. What began as a required task for Curry, alongside his roommate and teammate, Owen Seebold, became an activity he grew enamored with, Todd said.

Early on, when Curry came home for break, Erin spent a day teaching him how to cook various meals. They froze the items so he could take them back to school. At SU, he relied on Erin’s favorite recipes for easier-to-make foods: burgers, spaghetti and meatballs, hot dogs, macaroni and cheese and chicken and biscuits, for instance.

Slowly, Curry grew more advanced, experimenting with salads, fish, ribs and ribeye and tomahawk steaks, Todd said. He learned to make his own sauces, moving toward “full-service kind of cooking,” Todd added. Since he didn’t have a barbecue grill in his apartment, he taught himself how to reverse-sear steak by using a cast-iron skillet and the oven.

“I don’t think he has one speciality, just a bunch of different things he likes,” Todd said. “He’s expanding his horizon in terms of what he makes, and I think he’s going to continue finding different things to cook.”

For gifts, Curry always asks for something cooking-related now, his dad said. Erin got him an air fryer for Christmas one year, and a cutting board engraved with “The Hangry Chef” as well as a high-quality Cutco knife another year.

During quarantine, Curry had more time at home to further develop his skills. He worked on marinating vegetables and making a variety of sauces — including alfredo, rosé vodka, salsa and guacamole. And he learned to make bread and pizza dough, among his grandmother’s favorites, Erin said.

Curry and his mother sent recipes back and forth for dishes they thought would be good. He’s good enough now that he doesn’t always need a recipe, Erin said. Still, Curry said his mother is the better cook because she knows so many recipes “like the back of her hand.”

When they cook together, one will take the lead while the other observes, helps and asks questions about the process, Todd said. Curry enjoys the whole experience, starting with going to the grocery store and picking out ingredients, Erin said.

“It’s something that those two can do and bond together about, so I think she loves the fact that they’re both inventors and both great cooks,” Todd said.

Besides learning from his mom’s recipes, Curry said he watches a lot of YouTube tutorials from Sam The Cooking Guy and Joshua Weissman, his two favorites.

“That really helped him become a really good cook,” Erin said. She said her son is more of a “video watcher” whereas she’s typically more invested in Pinterest or online recipes.

While in quarantine, the family had a cook-off contest that featured Curry, his girlfriend, his three younger sisters and Todd. They broke off into pairs and each cooked a different dinner, and Erin judged.

Curry made his steak with a chimichurri sauce, Todd’s favorite. The sauce makes it special, Curry explains, and involves chopping up parsley, cilantro and garlic before adding oil, vinegar, salt, pepper and red pepper flakes. Todd recalled how his son always makes him stick his pinky in the green sauce to make sure it’s good. Letting the meat marinate overnight is where the flavors “really come together,” Curry added. 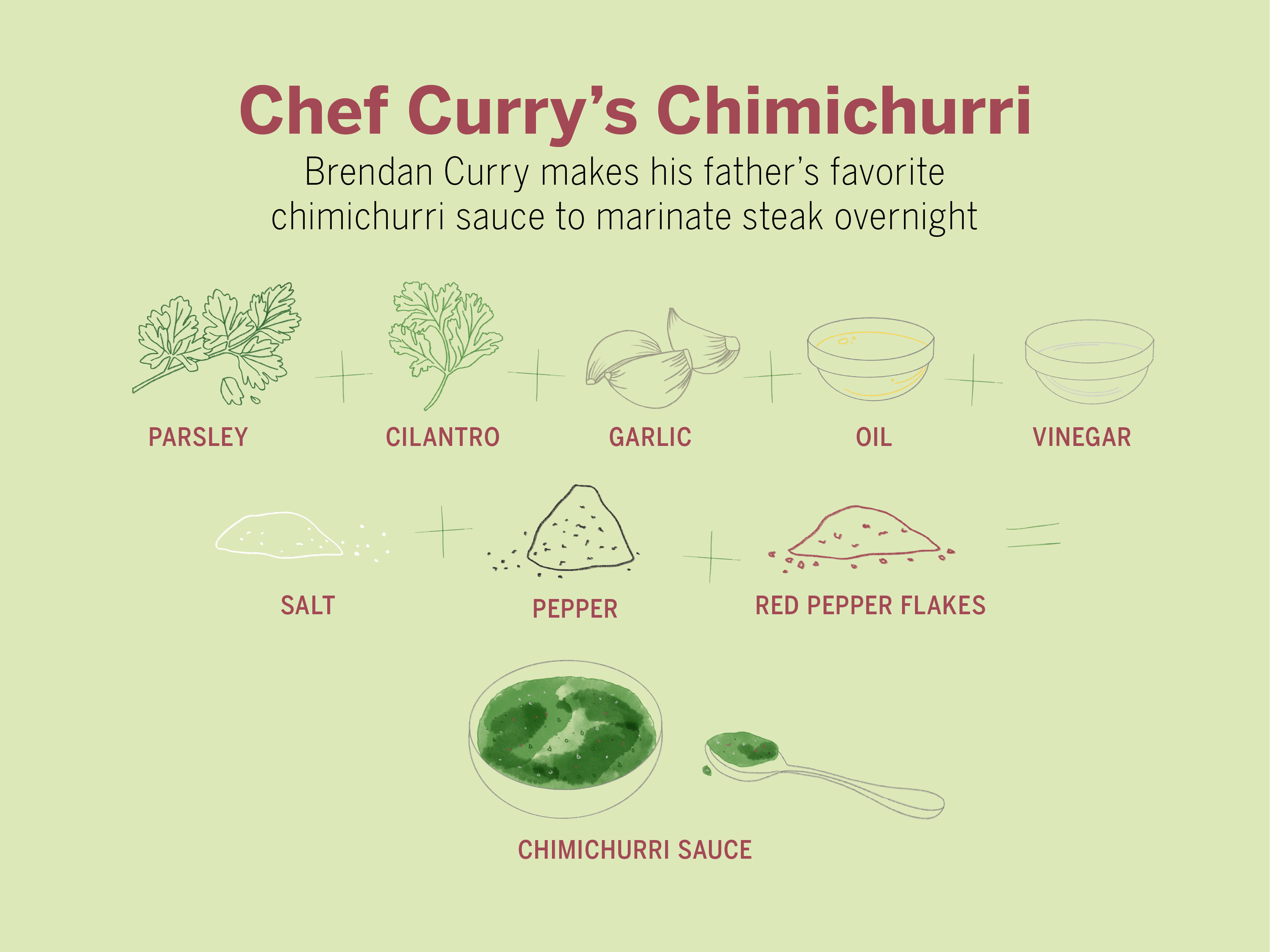 The former SU player had a lot more time to cook during the lacrosse offseason. In February, he did two drive-thru sales and sold out 50 bacon, egg and cheese bagels each time. Curry said SU defensive coordinator Dave Pietramala — a bagel fanatic from Long Island — had one of Curry’s bagels too, and liked it. The bagels were Dordevic’s favorite dish.

This year, Curry was the chef of his house of over 10 lacrosse teammates and roommates. He cooked while a few others were “sous chefs,” helping grab items from the fridge in addition to cleaning up.

Todd laughed and called his son “messy as sh*t”. Curry uses every utensil and vessel in the kitchen when he cooks, and even he admitted that he needs to work on his pan-cleaning skills.

“It’s like a tornado when he’s done, but the food’s great,” Todd said.

The roommates like his chicken parmesan — Curry’s personal favorite — and his chicken wings, Dordevic said. The process involved some trial and error, but Curry said his roommates are honest when something doesn’t work out too.

Curry doesn’t know whether cooking will ever become more than a hobby. Right now, it’s a passion, like lacrosse, where he’s continuously working to improve. But one day, he could potentially envision himself opening his own food truck or restaurant.

“It’ll be a serious hobby for him,” Todd said. “He’ll continue to grow in his culinary skill set.”