Maddie Jones felt cramped in the Carrier Dome’s revolving doors. It was Syracuse’s first basketball game of the 2019 season against Virginia, and there wasn’t much space for Jones — who has balance issues — and her guide dog, Copernicus. Inside the stadium, Jones needed to find a seat for the two of them.

“It was hard to find an area that could be in the student section, like that’s where I had tickets to,” Jones said. “So I couldn’t go sit somewhere else and have extra room.”

Right before tip-off, a Carrier Dome security guard began poking the SU sophomore’s back while she was stuck in the student section walkway. Those pokes became pushes, and Copernicus stood in between them to make sure Jones wouldn’t fall.

“You have to leave,” Jones recalled the guard saying. “You can’t be here.”

She was “herded” around to a spot near the bleachers and hasn’t been to another game since, she said.

Jones is one of many people with disabilities who visit the Carrier Dome. The stadium, which celebrated its 40th anniversary on Sunday, is undergoing a $118 million renovation project announced in May 2018 that includes $6 million toward compliance with the Americans with Disabilities Act, a federal law that prohibits discrimination based on disability.

“Forty years we’ve been out of compliance,” said Pete Sala, SU’s vice president and chief facilities officer.“ (We’re) making sure the people that are in a wheelchair or have mobility challenges have the same experience as people who walk through the revolver.”

Before the renovations, accessibility was limited. The Dome’s revolving doors presented a challenge for those with mobility issues, seating was an issue for those with wheelchairs and guide dogs and the bathrooms weren’t compliant with ADA standards, Sala said in May.

These ADA renovations were made because “it’s actually the law,” said Stephen Kuusisto, an SU professor who is blind. Because SU is a Title III school, the university was required to be ADA compliant on all parts of the Dome that were renovated. 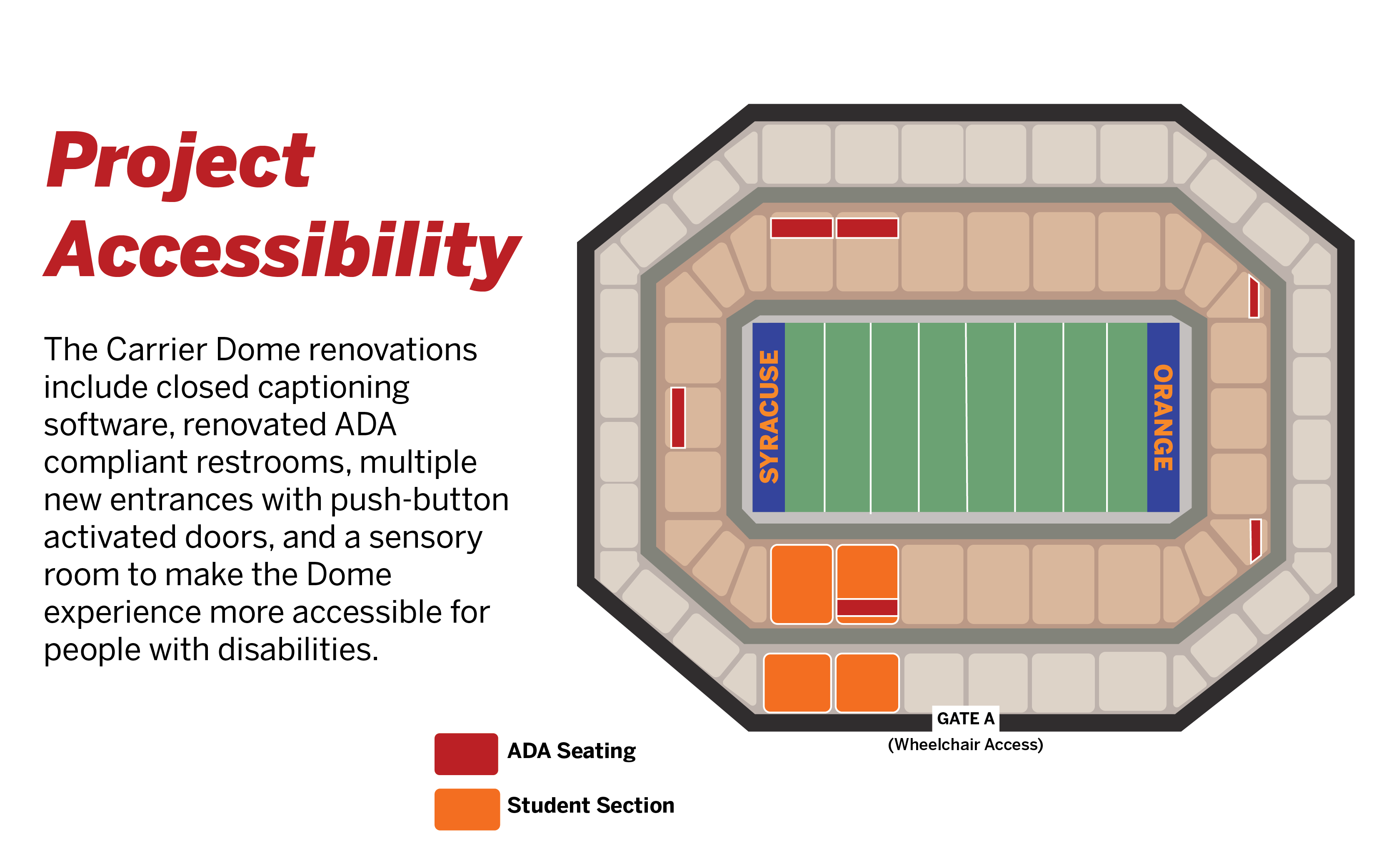 So far, some progress has been made. In recent years, the Dome has added closed captioning software. And during construction in the past year, Sala and his team renovated some bathrooms to make them ADA compliant and created multiple new entrances with push-button activated doors. They’ve also added a sensory room for people with sensory issues to calm down in a safe space. The updates are part of a rolling process, Sala said.

SU also plans to add more ADA compliant seating in the coming years and has designs for it, along with working on upgrading the elevators. For renovations, the university worked with United Spinal, a disability rights organization, measuring “right to the quarter inch” so that everything is compliant, Sala said. The upgrades are scheduled to be done by 2022.

“Most big-time sports have done a good job including the disabled community in their fanbase,” Kuusisto said. “It’s exciting that SU is really getting it. I’m thrilled.”

When Mark Banick first walked inside the Carrier Dome in 1980, the lifelong Syracuse resident felt a buzz about Syracuse’s new stadium, one that could seat nearly double the fans of Archbold. Forty years later, a lot has changed, but Banick still feels that same excitement.

The biggest difference now is that he is a wheelchair user. Around six years ago, Banick was accidentally shot while waiting to give someone a ride late at night. The incident left him unable to walk. While recovering, Banick regularly watched Syracuse games on TV from his rehab nursing home in Utica, but he longed to cheer in the Dome again.

In 2018, Banick attended a Syracuse-Georgetown basketball game, his first time back since the incident. He had to navigate through crowds of people in his powered wheelchair and was eventually ushered to the Carrier Dome’s second-level in one of the disability-designated areas with his son.

During games, the season-ticket holder stayed in the designated second-level section, normally accompanied by his son or one of his friends. When other patrons with disabilities and their companions came in, they would all “scooch” together to make more room in the limited space available. It built rapport, and he regularly talked with a woman who also uses a wheelchair and her sister while cheering.

It was a “top-notch” experience, Banick said, but there’s one thing that troubles him: He wants to go down to the lower level. Banick has asked staff if it’s possible. Their response is always no. He would love to be on the field and meet Syracuse’s football squad, would love to talk with Marek Dolezaj, his favorite basketball player right now, whose family also originates from Slovakia.

Forty years we’ve been out of compliance. (We’re) making sure the people that are in a wheelchair or have mobility challenges have the same experience as people who walk through the revolver.

All along, there’s been an elevator on the southwest corner of the Dome that goes down to the courtside level. But it isn’t ADA compliant, and Banick still hasn’t found a way down to the first level. He hopes he can find one this year, especially with Dolezaj’s senior season upcoming. But with the COVID-19 pandemic, he isn’t sure.

“A lot of different things are about access,” Banick said. “We’re (just) as interested as getting down and seeing the players as any other fan.”

After being hired as a professor at SU in 2011, Kuusisto said that the university wanted a few publicity photos of him, so he recommended the end zone as a good spot. While going inside, Kuusisto noticed there was only one ADA compliant door. He started asking about accessibility, and the excuse was that, because the building was old, it had limited ADA features.

As part of the Burton Blatt Institute, an SU organization that advances people with disabilities rights, Kuusisto is excited about the improvements because of the new opportunities it presents, he said.

“I’m celebrating the fact that they’re doing this and they’re going to improve all these features because it will make the Dome not just accessible, but (also an) inviting place, for all kinds of fans with disabilities,” Kuusisto said.

Kuusisto had been limited to attending a few convocations and graduations in the Dome during his time at SU, and wasn’t able to attend sports games in the past because of the inaccessibility. Sala and his crews are still working so that the stadium can be ready next Saturday for Syracuse’s first home game against Georgia Tech, but no one will be in the Dome this year because of the coronavirus.

Without fans, Banick, Jones and Kuusisto are just waiting.

“I’m just looking forward to going in and making some noise,” Kuusisto said. “I’ll be the loudest one cheering.”