Though the coronavirus pandemic shut down Syracuse’s campus in March, the $118 million Carrier Dome renovations have continued.

Gov. Andrew Cuomo’s executive order on March 20 required all nonessential workers to stay home, but construction workers were not included, allowing renovations to the Dome to continue.

Syracuse Vice President and Chief Facilities Officer Pete Sala said at a press conference Aug. 7 that renovations remain on track for the Dome to be operational for SU’s football home-opener against Georgia Tech on Sept. 26.

“I’m very confident,” Sala said. “I’m watching what’s going up, I know when things are supposed to be in town in Syracuse. The workforce is very, very, very dedicated.”

The renovations, announced in May 2018, include accessibility measures to comply with guidelines from the Americans with Disabilities Act, improved WiFi and a four-sided video board in the stadium’s center. While other universities’ recent stadium renovations have focused on increasing capacity, SU was able to modernize in different areas because the Dome already seats nearly 50,000 people.

The main priority ahead of the football opener is ensuring upgrades to the field’s surface are completed. The track surface, which goes under the field turf, was in “pretty rough shape,” Sala said. Much of that has now been stripped away and is set to be levelled, with installation occurring in the last week of the project, Sala said.

The field upgrades are different from that of the University of Maine’s Alfond Stadium. The university plans to replace its 12-year-old turf field. Field turfs typically last eight to 15 years, but heavy usage can also shorten their lifespan, Maine athletic director Ken Ralph said.

SU has not announced plans to replace the top layer of turf, though Sala said there’s a few spots they would repair. Repairs may be necessary in the near future, since football and both lacrosse teams use the field turf. 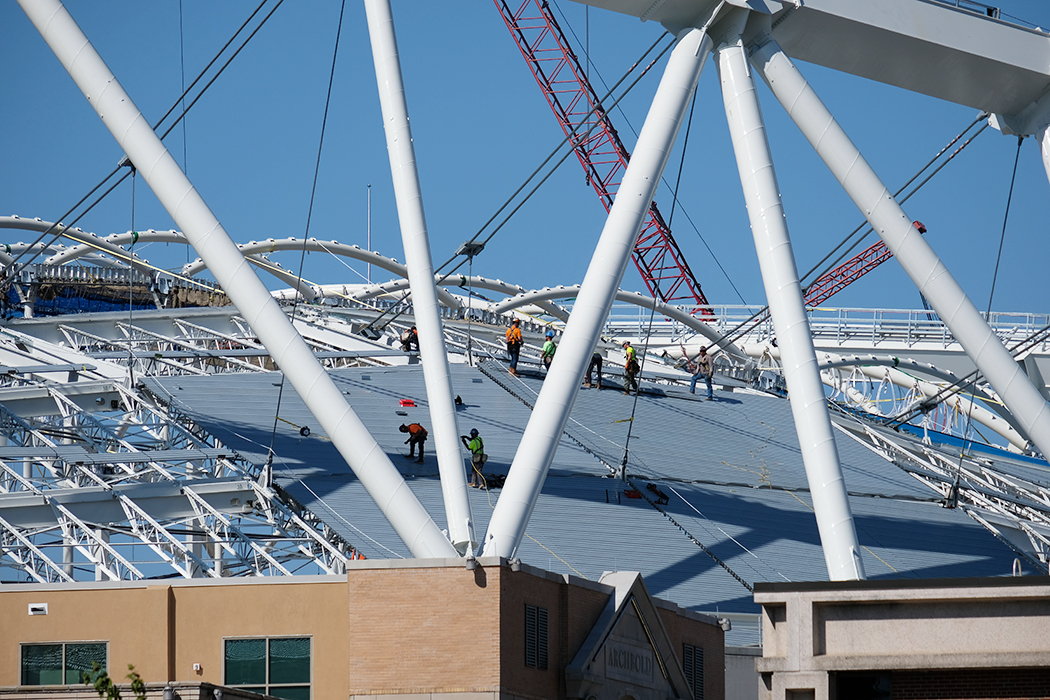 The Carrier Dome renovations will include compliance with guidelines from the American with Disabilities Act, improved WiFi, and a four-sided video board in the center of the stadium. Will Fudge | Staff Photographer

For 40 years, fans have pointed out the irony of the Dome not having a cooling system despite having naming rights from air conditioning company Carrier. SU was able to get “the best of the best” contractors and workers to install the system, Sala said.

The installation was ahead of schedule as of Aug. 7, with about 80% of the work done. The progress will allow some sections to be air conditioned as early as this fall, Sala said. Previously, the air conditioning units were not expected to be operational until May 2021.

Because the building was originally designed to have air conditioning, installing fans, coils and other equipment was straightforward, Sala said. The air filtration units have been upgraded to meet the requirements and help combat COVID-19.

“We have an incredible capability to roll the air over the building multiple times an hour,” Sala said.

One of the most noticeable upgrades will be the four-sided, 62.5-by-20 foot video board directly below the new roof. Four additional 20-by-10 foot boards will also be added into the four corners of the Dome. The main video board will be equipped with enhanced lighting and sound capabilities, which have been pre-aimed and wired, allowing construction to stay on schedule.

But before the video boards, sound and lighting systems can be installed, work on the roof must be completed to make the Dome “watertight,” since that equipment can’t get wet, Sala said. Paneling and completion of the new roof would be happening “pretty quickly here in the next couple of weeks,” he said Aug. 7.

Similar to 2019 upgrades at Iowa, BYU and Old Dominion’s football stadiums, the Dome will feature new concession stands and restrooms.

While the renovations are nearing completion, it’s still unclear when Syracuse fans will be able to experience the upgrades firsthand. Gov. Cuomo announced in July that fans would be prohibited from college sporting events this fall, though Director of Athletics John Wildhack said SU would seek “further clarification” on the order.

Editor’s Note: All Carrier Dome renovation updates are current as of Pete Sala’s Aug. 7 press conference. Sala was not made available for an interview for this story.

The post Carrier Dome renovations continue ahead of football season-opener appeared first on The Daily Orange.