hen Kamilla Cardoso arrived at an airport in Tennessee four years ago, Treasure Hunt couldn’t believe how tall her newest teammate was. She knew Cardoso, an incoming high school freshman, was listed as 6-foot-6. But when people say that, they’re usually shorter, Treasure said.

Cardoso wasn’t. Her Hamilton Heights (Tennessee) Christian Academy teammates and coaches’ first impressions of her all had to do with height. Head coach Keisha Hunt’s dad, who’s 6-foot-4 and went to the airport with Treasure, was amazed that Cardoso was taller than him.

“I’ve never seen a girl that tall before,” Ruth Balogun, a high school teammate who now plays at Central Arkansas, said. “I was just shocked and surprised.”

“She was built different.”

Cardoso’s 6-foot-7 frame makes her the tallest player in the Atlantic Coast Conference. Entering her freshman season at Syracuse as the highest-ranked recruit in Syracuse program history (No. 5) and top national recruit for her position, Cardoso has earned a spot on the Lisa Leslie Award watch list, given annually to the nation’s best center.

But when Cardoso arrived in Chattanooga from her hometown in Montes Claros, Brazil, the polished recruit who she is now hadn’t shone through yet. Cardoso had the best speed and footwork of any post player Keisha had ever seen. Her height presented a notable advantage, but her technical skills were raw. Since then, she’s “come a long way,” Ruth said, though Cardoso admitted she still has room to grow.

“You could tell that she had been used to just relying on her height, so a lot of the fundamental stuff she didn’t have,” Keisha said. “If you’re a 16-year-old, 6-foot-(6) girl, why do you have to block out? You’re getting every rebound, anyway.”

Basketball was easy back in Brazil, Cardoso said. In elementary school, she averaged about 30 points and 20 rebounds per game and, as she got older, 5-foot-8 or 5-foot-9 opponents couldn’t guard her. She just had to “stand there, run the court, put her arms in the air and shoot,” Treasure, a four-year Hamilton Heights teammate, said. 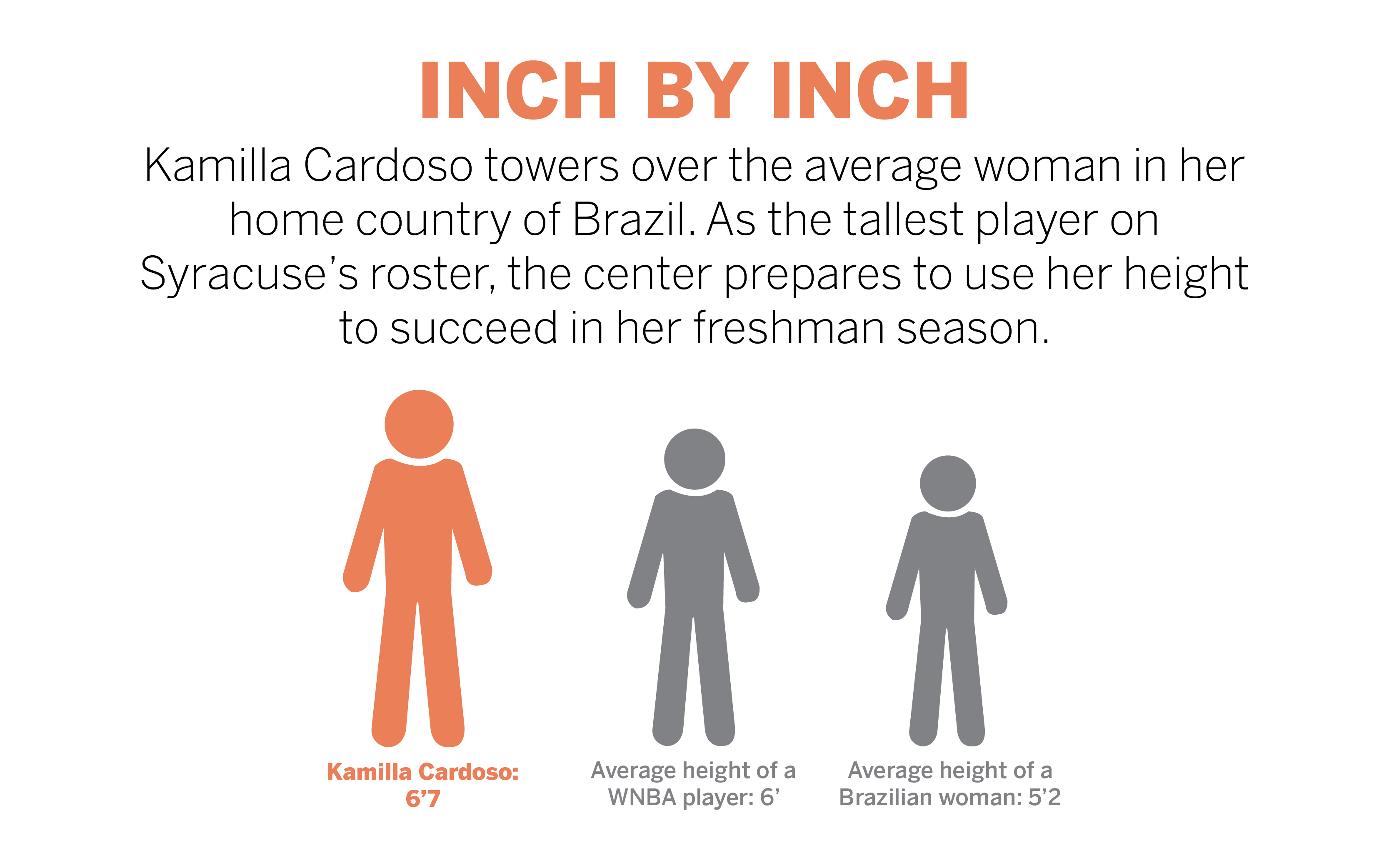 Girls basketball in Brazil wasn’t widespread, and Cardoso knew she had to come to the United States to ultimately play in the WNBA, a dream she’s had since she was 14 years old. After extensive conversations with her mom, they decided that Hamilton Heights, a boarding school where non-local students live with host families, would be best for Cardoso’s education and basketball. Upon arrival, Treasure said Cardoso was initially “kind of shocked” to find that she wasn’t one of the team’s best players.

The competition at practice was steep compared to that in Brazil. Cardoso played with and against Division-I talent such as Treasure (Kentucky), Ruth (Central Arkansas) and Elizabeth Balogun (Louisville) and Jazmine Massengill (Kentucky). Cardoso quickly realized her height didn’t matter against stronger defensive players.

“That was her biggest progression that I’ve seen, not to rely on her height and learn how to do things right,” Keisha said. 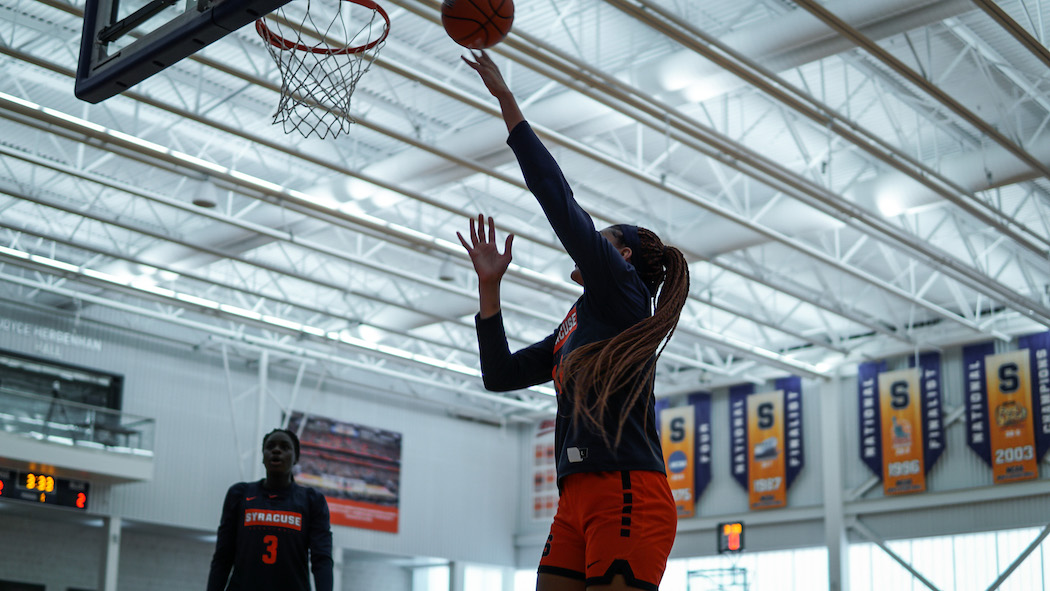 At Hamilton Heights Christian Academy, Cardoso honed her skills to take better advantage of her then 6-foot-6 frame. Courtesy of SU Athletics

Still, few Hamilton Heights opponents could match up with Cardoso. She wasn’t a traditional post-up player, Treasure said. Instead, she got her points from running the court and outpacing the other post. To a certain degree, she still isn’t a “true post.”

“If (an opponent was) a good post player, they would eat her lunch,” Keisha said. “Especially her trying to guard them.”

Hamilton Heights’ strength and conditioning coach helped Cardoso improve her footwork by her final two seasons, creating a strong, low center of gravity that made her harder to push off a spot.

“I’ve always wanted to see Kamilla in a true post-up,” Treasure said. “When she did that in high school, we used to go crazy, crazy on the sidelines.”

In addition to post-move drills, Keisha also had Cardoso working on midrange shooting, defensive movement and layups. Early on, teammates lobbed balls up to Cardoso for layups — but she would miss most of them, Ruth said. She laughed about the way Cardoso would “miss, put it back, miss, put it back and then finally make one shot.” Oftentimes, that meant games with 20 rebounds and four points, Ruth said.

Keisha had a drill for Cardoso where she had to make a layup on one end of the court and then the other. Back and forth, Cardoso had to score 50 in a certain amount of time. Another included setting balls on the ground at midcourt that Cardoso had to pick-up and score the layup. Over the years, drills such as those made Cardoso “consistent and unstoppable,” Ruth said. 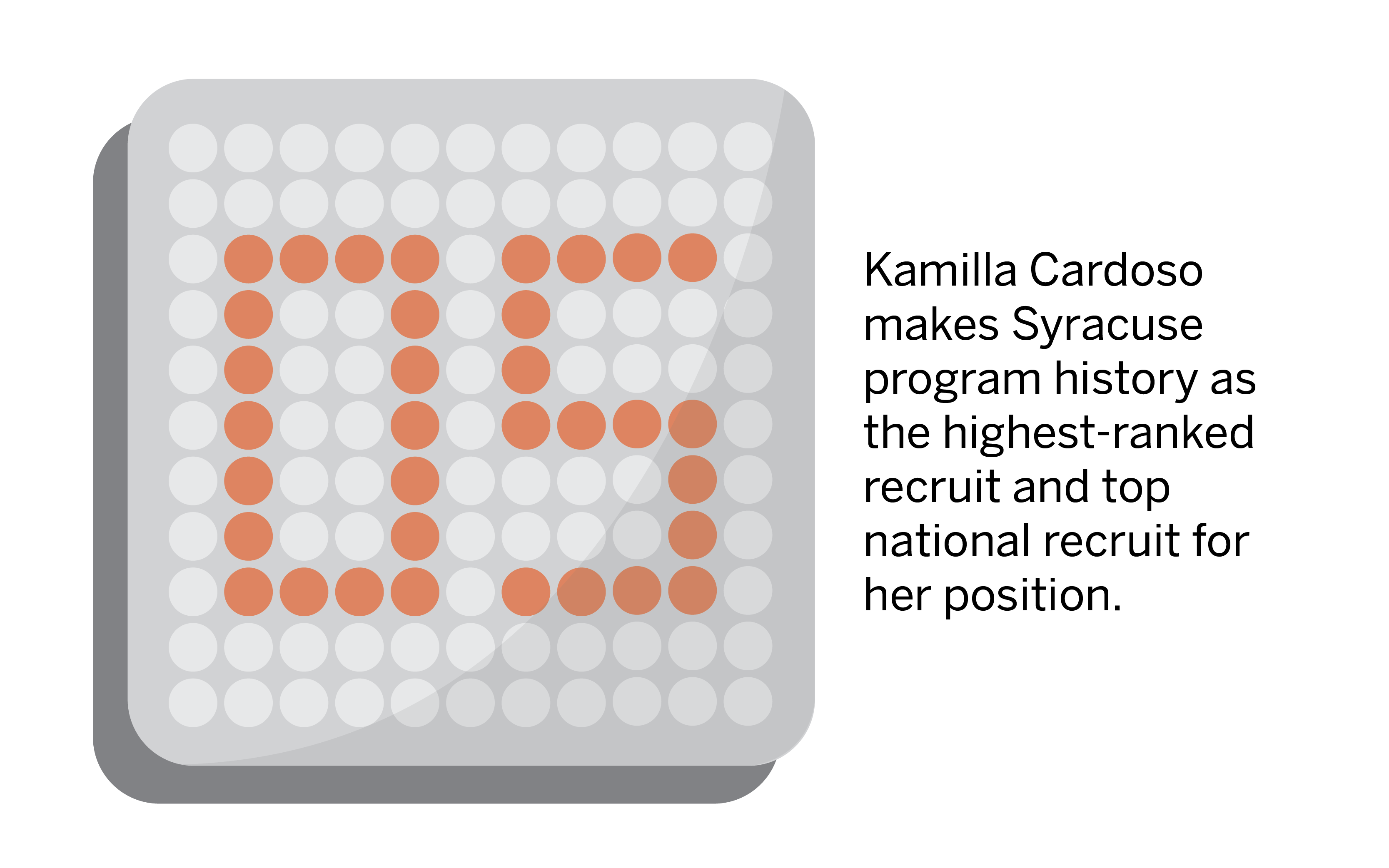 At Syracuse, Ruth expects Cardoso to win Atlantic Coast Conference Freshman of the Year and break records for blocks and rebounds. SU teammate Tiana Mangakahia expects Cardoso to play over 25 minutes a game and average a double-double because of her strong rebounding abilities.

“We played against some of the (Syracuse) football players up at Tecumseh (Elementary School) in the summer, and she was rebounding over (tight ends),” Mangakahia said. “She made it look so easy.”

Cardoso didn’t know any English when she arrived from Brazil, instead using Google Translate to communicate with teammates and with Keisha and Treasure, whom she lived with from the middle of freshman year until graduation. But in less than a year, she was fluent in English — she had no choice because no one else spoke Portuguese.

“She’s a strong person,” Treasure said. “To be honest, I don’t know how she did it. It amazed me that she did what she did.”

Before Cardoso arrived at Hamilton Heights, Keisha received videos of the center from a fellow coach. The head coach was impressed that Cardoso still ran up and down the court as fast as the guards, despite her size. She took the highlights to Hamilton Heights’ principal, who wasn’t a women’s basketball follower, and he emphasized a couple of her missed shots.

“He said, ‘You know, she doesn’t look that good to me,’ and I said ‘Are you crazy?’” Keisha said. “We accepted her and haven’t looked back since.”

At Hamilton Heights, she learned not to rely on her height and athleticism like in Brazil. At Syracuse, she’ll need to progress more as an ACC center.

“I have to do a lot of things,” Cardoso said. “I just need to keep working.”

Because the next step, in her mind, is the WNBA.

The post ‘BUILT DIFFERENT’: How Kamilla Cardoso took advantage of her 6-foot-7 frame appeared first on The Daily Orange.