PJ Hall slid underneath the basket after Jesse Edwards beat him for offensive rebound positioning, spun toward the basket and elevated for a layup. Less than two minutes remained in the second half, and Edwards’ dunk had stretched Syracuse’s lead — once 12 points, then erased and gradually built back again — to 10 points.

Jimmy Boeheim had started the possession with a 3-point attempt that missed the backboard, the rim — everything — en route to a scramble by the right block. Edwards’ initial layup attempt bounced off the rim, but Syracuse’s center rose again to redirect the shot back toward the basket and through the net while drawing a foul on Clemson’s Chase Hunter. He pumped his fists, untucked his jersey and weaved his way toward the free-throw line, pushing the Orange’s lead into an area of safety and eliminating the potential for another comeback by the Tigers that might unwind a potential third conference win of the season for SU.

Edwards anchored Syracuse’s defense, too, by altering two corner 3s and disrupting another mid-range jumper before fouling out again, and SU’s three-guard look — this time featuring Jimmy instead of Cole Swider at the power forward slot — was lifted by Buddy Boeheim and Joe Girard III’s 48 combined points in the Orange’s (9-9, 3-4 Atlantic Coast) 91-78 win. “We need both of them,” Boeheim said postgame. An offense built to score continued to score, a porous defense continued to be porous, but for one night, the Orange had enough to win for just the second time in their past six games.

“We can’t win games just scoring points,” Boeheim said. “We can’t. We have to get stops and we were just giving too many easy, too (many) easy things inside.”

Syracuse didn’t score for nearly the first two minutes of the game, but once it did, when Girard curled around a screen and connected from behind the arc, the Orange used a 10-0 run to build a 21-9 lead. Along the way, the Orange received spurts from role players to ignite a bench spark that for most of the season hasn’t existed. Bourama Sidibe checked in as the first SU player off the bench and promptly redirected Naz Bohannon away from the paint and forced a pass to the corner in his first minutes since Dec. 29.

Then, Benny Williams — who didn’t log a minute against Florida State — blocked Bohannon after he slipped behind a pair of SU defenders. And Symir Torrence, who emerged within the three-guard lineup the Orange have unveiled in recent games, spun for a layup that put the Orange up 27-23 before cutting left and right to kickstart a layup drive.

“It allows more ball-handlers, and it also allows us to kind of space the floor a little bit more, and Symir does a great job rebounding on defense so it’s not like we’re being hurt there,” Girard said of the three-guard lineup. “… And so when all three of us are out there, we kind of just click.” 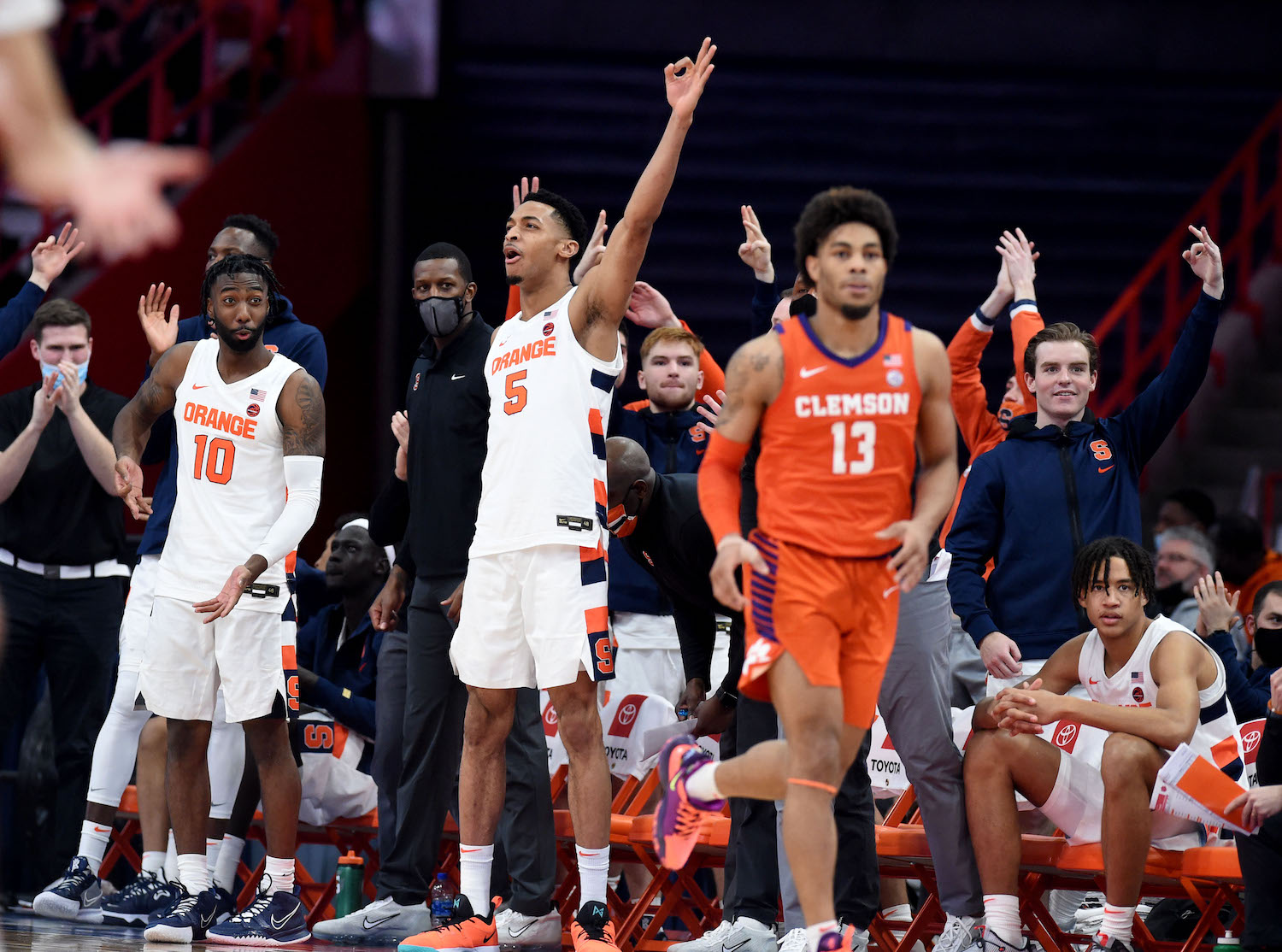 Syracuse scored at least 90 points for the first time since its game against Brown on Dec. 27. Courtesy of Dennis Nett | Syracuse.com

But another SU lead, just like against Miami and Georgetown, among other games throughout the season, quickly thinned. Syracuse turned the ball over five times in nine possessions, and Clemson ripped off a 9-0 run to force what once threatened to be an early blowout back into a possession-by-possession flow. SU still managed to bring a one-point lead into halftime by sticking to what has worked in the past — its offense, built around Buddy and Girard, and tailored as defenses adjusted. For the Orange’s final basket of the frame, Girard drove before threading a pass to Buddy in the corner. His Clemson defender was face-guarding and couldn’t see the ball — despite the Tigers’ players on the bench standing and waving their arms — and that gave Buddy enough of a window to elevate and hit the shot.

That same ebb and flow continued into the second frame, but unlike in the game’s early minutes, the Orange couldn’t construct a lead initially. Swider forced a mid-range, pull-up jumper and flipped his hands up in the air, pleading for a foul call, after it missed the backboard and rim. But two second-chance layups started that trajectory, and three free throws from Girard after Clemson fouled him expedited it.

Then, Swider faded out of bounds, twisted in an off-balanced position after he grabbed Buddy’s missed 3-pointer in transition, and flipped the ball to Edwards, stationed in front of the Syracuse bench. It was the 12:47 mark of the second half, and Syracuse’s lead sat at six points as Buddy curled around Edwards to receive the ball. 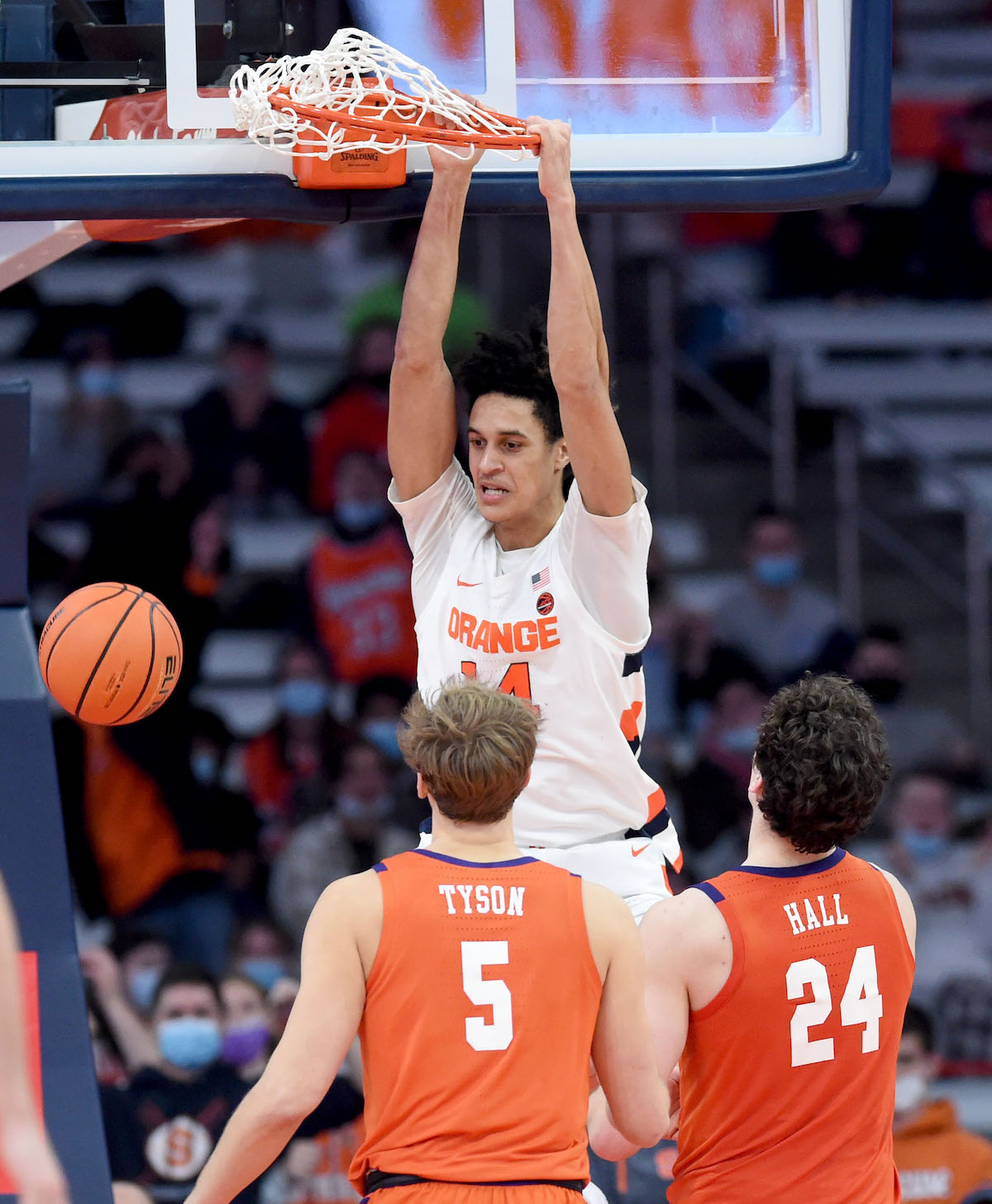 It created an opening for another 3-point attempt, and when Buddy’s shot sunk through the net, the Orange’s lead grew to nine. Back-to-back baskets from David Collins bookended Buddy’s basket, but even as the Tigers scored on 50% of their possessions, Syracuse capitalized on the extra opportunities when its defense did manage to make a stop.

“Buddy’s done a good job of getting to his spot, 15 feet, even to the basket,” Girard said. “I’ve tried to do a little bit of a better job of that here recently, and making plays as well. We know that when that happens to us, we’re gonna get a lot of attention from it, it opens up for a lot of other people as well.”

The 2-3 zone struggled to get stops again, allowing Clemson to shoot over 48% in the second half even as the Tigers 3-point shooting continued cratering after a strong start to the season. But SU’s offense — built to score points, and score them in bunches — methodically responded when Clemson threatened to cut its lead.

By that point, though, the foundation had been solidified. Girard hit a jumper with 10 minutes left, then added a pair of free throws a minute later. And when he stepped into his pull-up 3 and swished the shot with 6:52 remaining, he bobbed down the court as Syracuse’s lead once again grew to double digits, this time trending toward a finish opposite the ones that included their past blown leads.