After two positive COVID-19 tests left Syracuse men’s basketball in quarantine and paused the program’s activities, the team is set to take on Bryant in the Carrier Dome on Friday at 3 p.m. It’s the first of five scheduled nonconference games for SU and one of 20 conference matchups that begin in mid-December.

Last week, The Daily Orange looked at some of the numbers that’ll define Syracuse’s season. Here are some of the bigger picture metrics that will determine whether the Orange return to the NCAA Tournament in 2021:

The Orange ranked 349th out of 353 Division I basketball teams last season in number of minutes played by bench players. Each year, Syracuse looks like it will have the depth to play more than seven guys regularly. But in most seasons, head coach Jim Boeheim solidifies a six-or seven-man rotation early on, with an occasional eighth player filtering in.

This year, the main seven appears clear: Joe Girard III, Buddy Boeheim, Alan Griffin, Marek Dolezaj, Bourama Sidibe, Kadary Richmond and Quincy Guerrier. How much the Orange play a back-up center relies on Sidibe and foul trouble, but Boeheim’s made it clear he’s unlikely to go deep into the bench.

Since joining the Atlantic Coast Conference eight seasons ago, the Orange have been in the top 300 for bench minutes only in 2018. Expect Syracuse to yet again keep a thin bench in 2020-21. 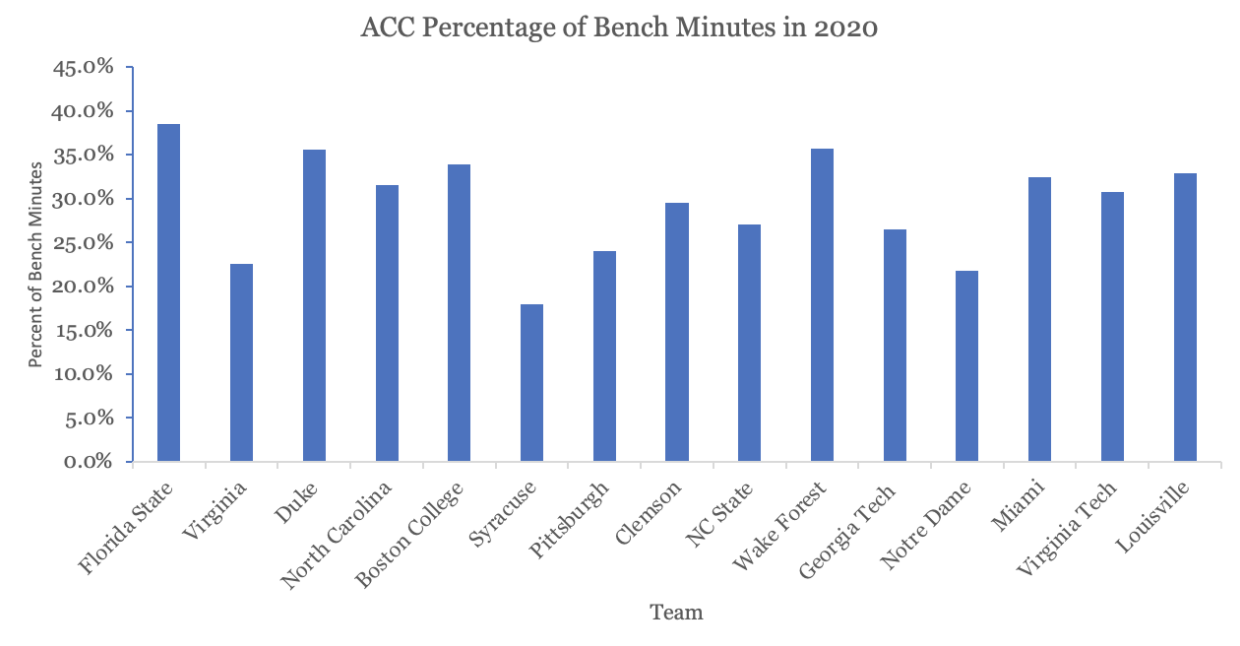 Two-foul participation rates have a massive impact on managing Sidibe.

Sidibe’s consistent foul trouble was one of the main issues for Syracuse’s defense last season. The Orange’s center picked up early fouls and had to either leave the game or alter his level of aggressiveness to prevent fouling out.

For years, Boeheim has trusted players with two fouls by leaving them in the game. In many ways, the two-foul participation rate is tied to his decision to not go deep into the bench. The Orange ranked sixth in 2019-20 in that percentage, at 54%, which is significantly above the 20.5% national average. Boeheim allows his players more leeway to stay out of the third foul on their own.

If Sidibe does pick up two early fouls in games this year, don’t be surprised to see Boeheim leave him in the game instead of turning to more inexperienced options deeper on his bench. 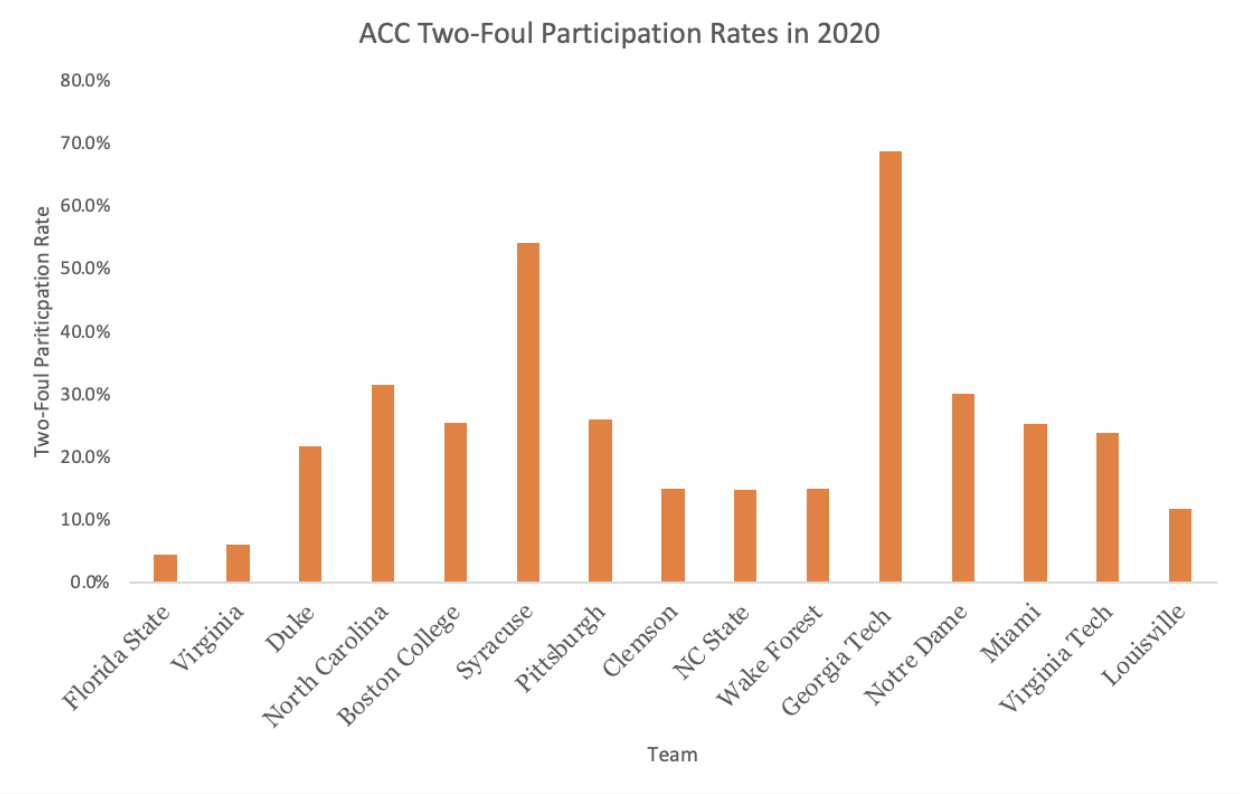 Minutes continuity has a moderate correlation to success the following season.

A lack of minutes continuity was another one of Syracuse’s biggest issues in the 2019-20 season. The Orange were replacing offensive and defensive production in Tyus Battle, Frank Howard and Oshae Brissett, among others. SU ranked 34th in minutes continuity in the year following its tournament run in 2018, with 69.9% of its minutes returning the following season.

The Orange coasted to an NCAA Tournament appearance in 2018-19 on the back of a strong nonconference performance early in the season. But SU ranked 231st in minutes continuity the following season, having to replace those key pieces. That year, 40.7% of players’ minutes were returned.

While some schools are able to overcome a lack of minutes continuity with top tier recruits across the court, Boeheim hasn’t recruited many one-and-done players in recent history.

Minutes continuity is an underrated factor in a year of COVID-19, where workouts and summer programs were significantly altered. The Orange return about 76.2% of their minutes from last season, which is likely to rank near the top of the country once games get underway.

SU could have an edge, especially early in the season, on younger, less experienced teams that have less time to gel together and play their best basketball.

Defending the perimeter was an issue with the zone in 2019-20. The solutions are less clear.

Syracuse’s 2-3 zone forces opponents to shoot from behind the 3-point arc more than almost every team in the country. SU typically ranks first in 3-point field goal attempts over a ratio of total field goal attempts. That percentage of shots from behind the arc has ticked up in the last five years as 3-pointers become a larger part of the college basketball landscape.

For SU, the perimeter defense hasn’t contested enough shots. SU’s 3-point defense slipped from 17th-best in 2018 to 87th in 2019 and 116th last season. That drop-off was a key driver in the defense’s worsening efficiency.

The Orange are always prone to play a game like the one against Virginia in 2019, when SU broke a program record for threes in a game in the Carrier Dome. Or like the one against Michigan State, when the Spartans missed nearly every three they took in the Round of 32 in 2018’s NCAA Tournament.

Syracuse needs to improve slightly in closing out better opposing shooters. With the improved offense, the Orange only need the defense to reach 2018-19 levels to make the NCAA Tournament. For Syracuse, that’s a difference of about 1-2% in opponent shooting percentage.

KenPom projects the Orange as the sixth best team in the ACC, one spot higher than they finished the last year. 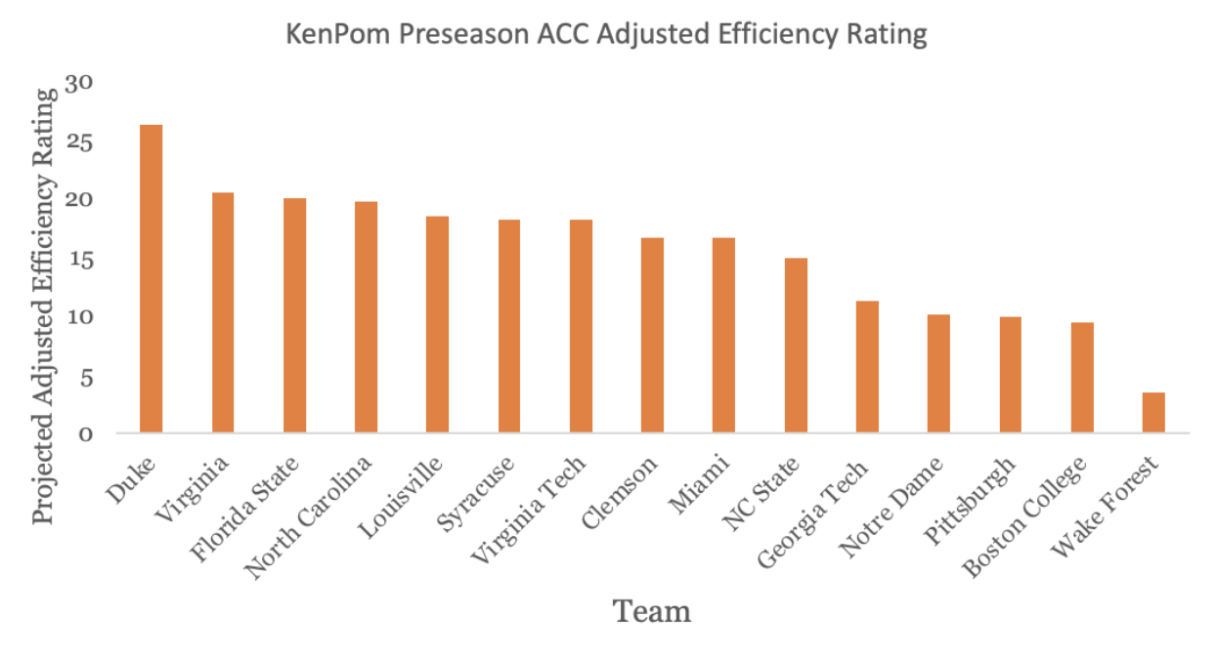 The ACC as a whole should be bolstered by the improvements of perennial title contenders Virginia and North Carolina, which KenPom ranks 16th and 22nd, respectively. Duke, Louisville and Florida State, who are replacing multiple first-round NBA talents, are the other teams projected ahead of the Orange in the conference.

However, Syracuse can bank on ACC wins against some of the worst teams in the conference. Their first three games are against Boston College, Wake Forest and Notre Dame, before the schedule gets tougher with games against North Carolina and Florida State.