Before the COVID-19 pandemic shut down college sports last March, Syracuse was on its way to missing the NCAA Tournament. The Orange had a lot of roster turnover from the year prior and even though they had the Atlantic Coast Conference’s leading scorer, Elijah Hughes, defensive struggles placed them in the middle of the ACC standings.

They finished 10-10 in conference play, but a poor nonconference showing had them out of the Tournament, according to multiple major bracketologists.

With everyone except Hughes back from last season’s main rotation, and the addition of Illinois transfer Alan Griffin, there’s optimism that the Orange will make the NCAA Tournament and finish in the upper tier of ACC teams.

However, as shown by head coach Jim Boeheim’s positive COVID-19 test, the season’s future is both uncertain and fragile.

Below is part one of The Daily Orange’s 2020 season analytical preview, with advanced metrics from KenPom.com.

Syracuse played faster in 2019-20 than it had in recent seasons, and there’s no reason to expect the Orange will slow down with similar personnel.

When looking at adjusted tempo, the Orange are not a team that plays fast. But they did play faster last year. SU ranked 179th out of 353 teams in D-I college hoops last year, putting them right around the average. It was also only the third time this decade that the Orange were in the top 200 in adjusted KenPom tempo. Their average number of possessions per game increased by more than two possessions per game from 66.1 in 2018-19 to 68.3 last season. Three years ago, SU was one of the 10 slowest teams in the country.

It’s not clear what is driving the speed up, but Boeheim did give indications last preseason that the Orange would look to get out in transition more than they did in seasons past.

As shown in the chart below, the Orange’s adjusted tempo has steadily increased in the last few seasons. 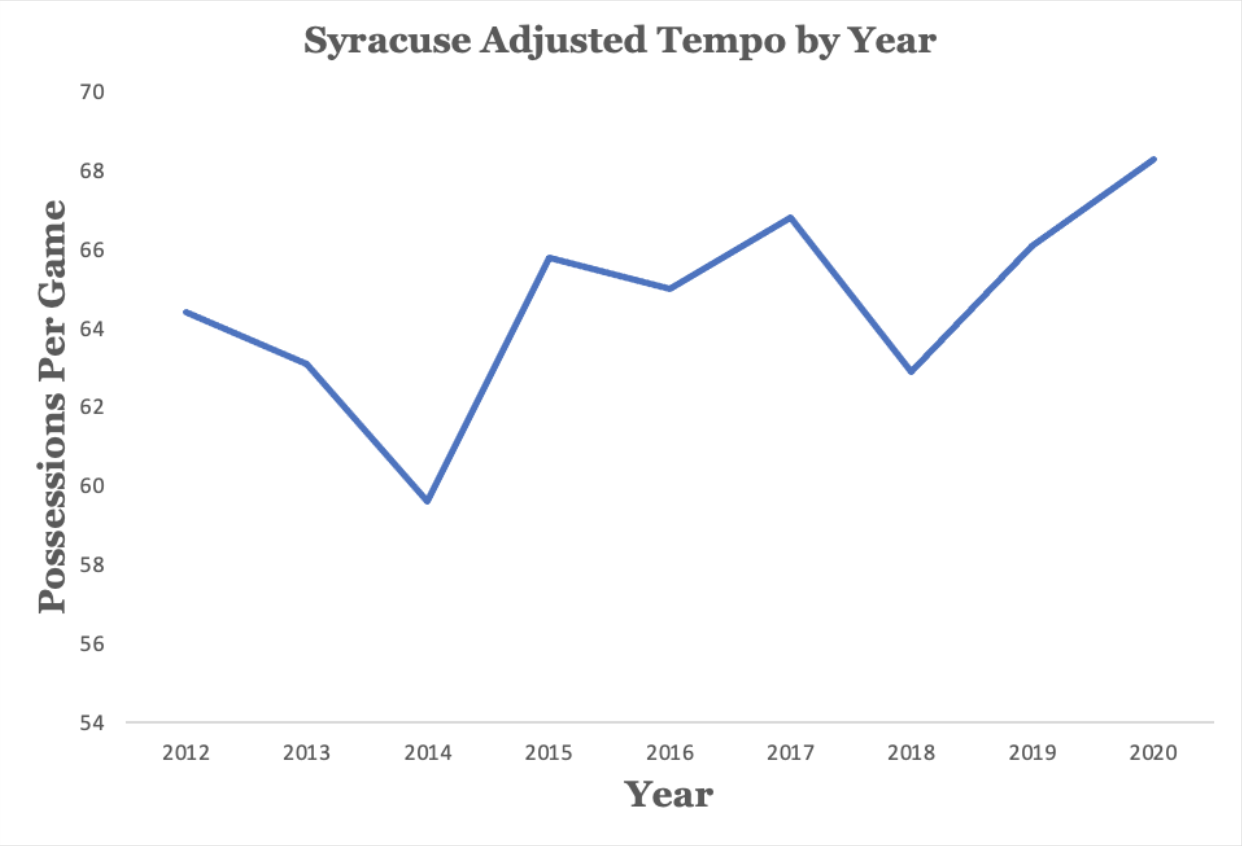 Syracuse’s zone is built to force teams to shoot the ball from the perimeter, but the interior defense is the main reason the Orange would’ve likely missed the NCAA Tournament.

Season after season, Syracuse’s opponents shoot a higher percentage of 3s against them than almost any other team in the country. In the past three years, SU has ranked fourth, seventh and 14th in opponents’ percentage of shots coming from behind the 3-point line.

Syracuse’s defensive length and exterior defense has prevented entry passes into the lane, and stifled mid range jumpers — one of the nation’s top defenses, according to KenPom’s adjusted efficiency, in 2017-18 and 2018-19. Syracuse’s backcourt of Tyus Battle and Frank Howard departed after 2018-19, and SU’s defensive efficiency plummeted with Joe Girard III and Buddy Boeheim at the top of the zone.
Boeheim said he didn’t see an issue with it, but Syracuse’s defense at the top of the zone was subpar. According to a NunesMagician.com story that used Synergy data defensively, Buddy and Girard were in the 25th and 35th percentile defensively last season. The Orange were worse at stealing the ball and worse at blocking shots without Battle and Howard. The decreased defensive activity made it easier for offenses to do what they wanted to Syracuse’s defense.

Syracuse’s improved offensive efficiency in 2019-20 came from two places and both can be attributed to its backcourt offensively.

SU’s offense jumped from 59th to 21st nationally in overall efficiency last season, and its two biggest areas of improvement were free throw shooting and turnover rate. Girard and Buddy both had turnover rates at or below 15.6%, compared to Howard, and Hughes, who were above that number in the 2018-19 season. By protecting the ball and cutting down on turnovers, Syracuse maximized its offensive possessions.

In a press conference last week, Boeheim said that he sees freshman Kadary Richmond as a point guard, which presents an interesting dynamic in the backcourt. While Richmond could improve the Orange’s defensive output, he has to limit mistakes for Syracuse’s offense to remain efficient. One major reason that Jalen Carey’s time at Syracuse was so limited in 2018-19 was turnovers. He had a 34.1% turnover rate, more than double many of SU’s top ball handlers, besides Howard.

Syracuse shot 5.5% better from the free throw line, which doesn’t seem like much, but does make a difference at the margins. As the Orange turn the ball over less, the graph below shows the positive correlation to their overall offensive efficiency in the last nine seasons. The r-squared value is 0.65, implying pretty strong correlation. 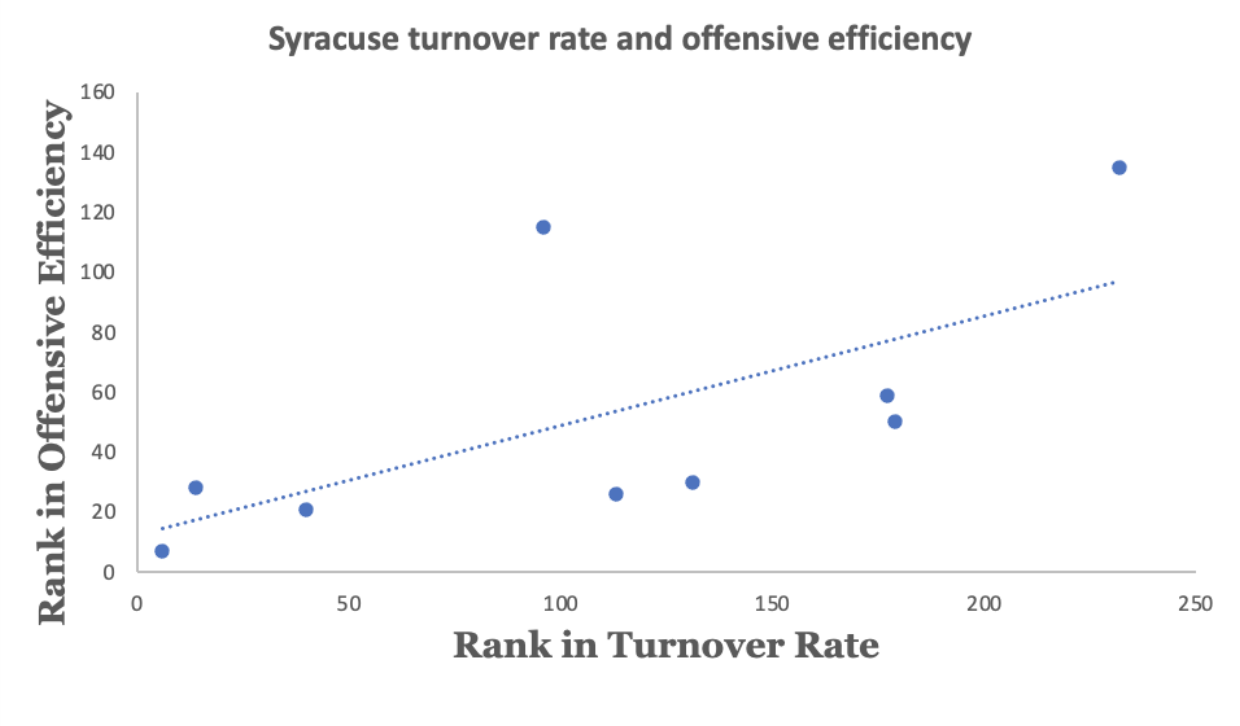 Griffin joined Syracuse looking for a bigger role as a focal point in the offense, but his impact in rebounding could be just as important.

Griffin played 41.8% of minutes in 2019-20 for Illinois, a team that was one of the Big Ten’s best teams. But when he was on the floor, few players had a larger impact. Griffin’s 11.2% rebounding rate on offense and 17.1% rate on defense would both rank second among the returning Orange, behind only center Bourama Sidibe. Griffin doesn’t turn the ball over much, leading him to have the sixth highest offensive rating in the country amongst qualified players.

The 2-3 zone will limit how good the Orange can be as a defensive rebounding unit. Syracuse has ranked in the top 150 in defensive rebounding percentage once since KenPom began tracking the numbers in 2002. But a potential frontcourt of Quincy Guerrier, Griffin and Sidibe could be one of the Orange’s best rebounding groups in years. The ability to steal extra possessions with what Boeheim called a “high motor” in Griffin is an underrated aspect of this roster construction.

There’s another metric that has been moderately predictive of the Orange’s overall offensive efficiency under Boeheim: assists per field goal made.

Watch this number throughout the season. The chart below tracks Syracuse’s overall offensive efficiency compared to the number of assists per field goal made. The r-squared is 0.54, implying a pretty strong positive correlation. As the Orange pass more to set up their offensive plays, offensive efficiency improves.

This is the importance of running an offense that looks much more like 2019-20, with Girard running the offense, than a 2017-18 stagnant offense that had few assists and lots of isolation basketball. As the Orange pass more, they play better offensively. The graph compares the Orange’s two rankings in both offensive efficiency and assists per field goal made rank. 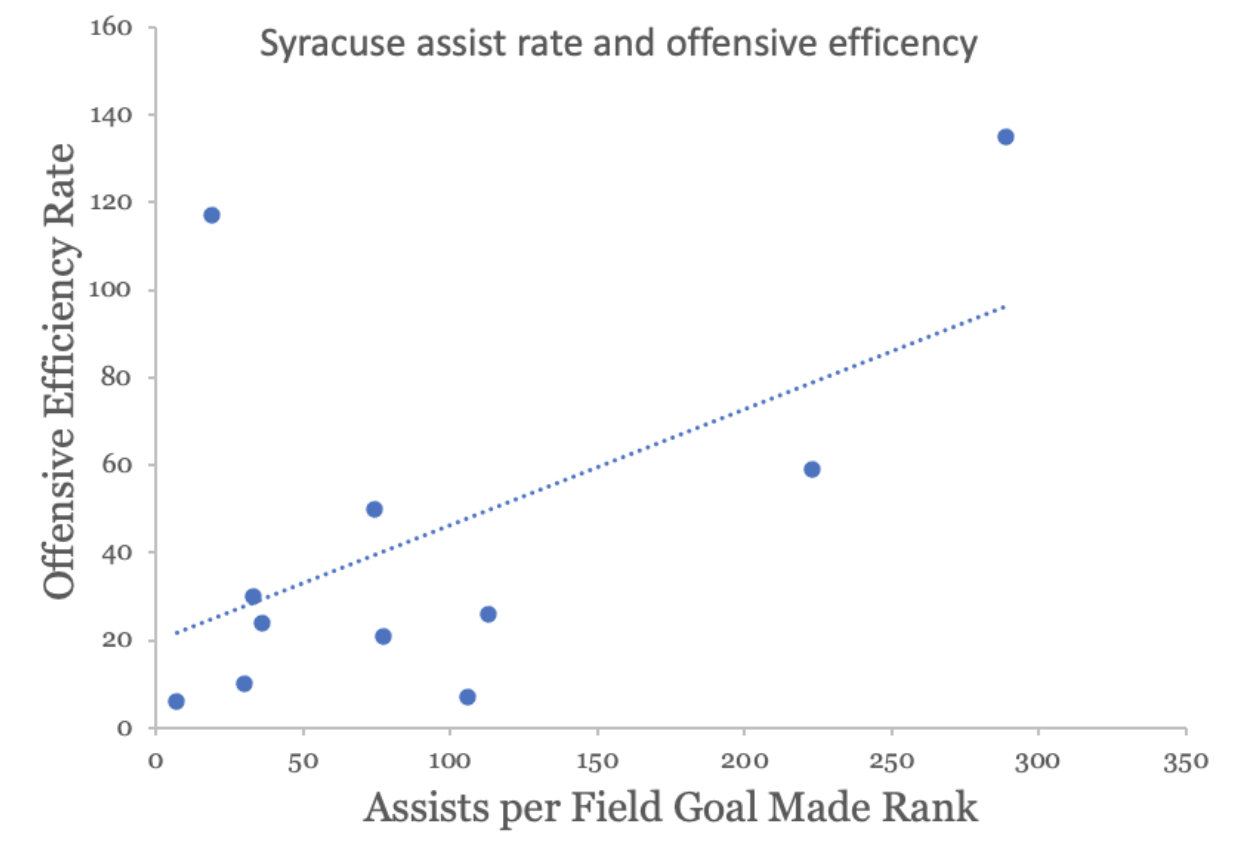 The Orange’s offense should be able to replicate last season’s success in the ACC, but how far they go will be determined by any SU defense.

The post Breakdown: A look at the numbers that will define Syracuse basketball’s year appeared first on The Daily Orange.