When Brandon DeNoyer worked with Taylor Booth in their five years together at Siena, the focus wasn’t on goals conceded. Instead, they turned their focus to stopping the next shot, using DeNoyer’s mantra of “Next shot, next save.”

“He would always be in the back of my ear saying ‘Next save, next save, let that one go, focus on the next one,’” Booth said.

DeNoyer joined Syracuse (0-1, 0-1 Atlantic Coast) back in July as an assistant coach. He specializes in goalkeepers and coached Catalina Perez to All-America honors in a previous stint at Mississippi State. Perez now plays for Italian club Napoli and the Colombian National Team.

While at Siena, DeNoyer helped Booth win MAAC Goalkeeper of the year. At SU, DeNoyer is set to work with last year’s ACC saves leader, Lysianne Proulx, but also a Syracuse defense that conceded 28 goals in 16 games last season.

Proulx has carried her strong play over into this season through one game, while the defensive issues on the field remain. Proulx tied a career-high with 10 saves in the 2-0 loss to Pitt, but the Panthers peppered her net with 27 shots, 12 of which were on target. Both DeNoyer and Proulx hope the senior goalkeeper can start posting more shutouts than saves. 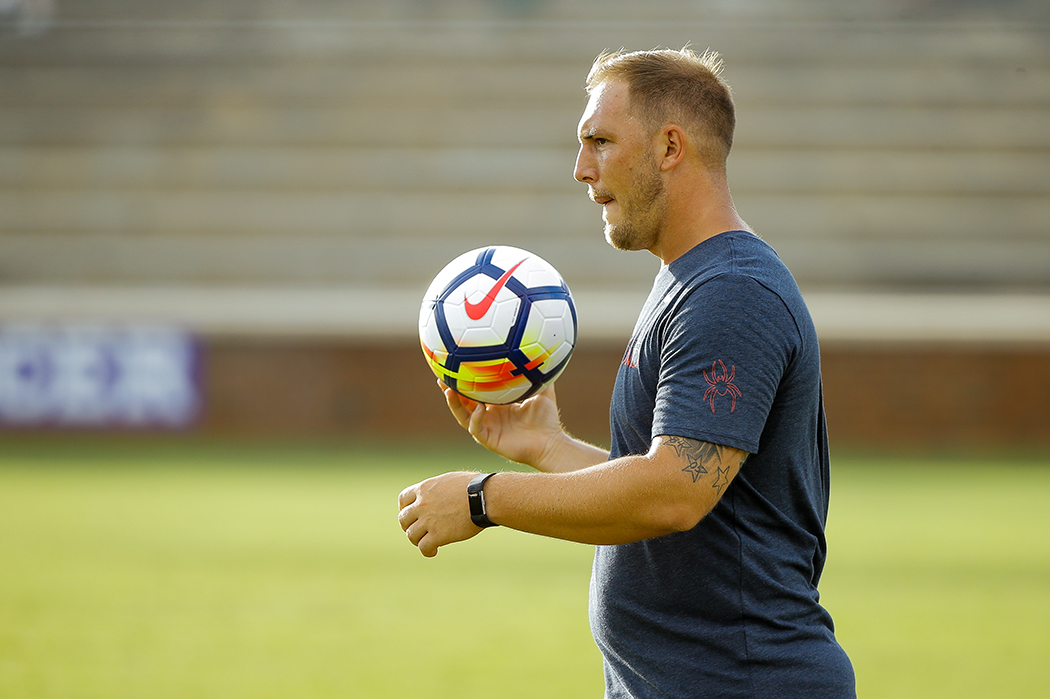 At Syracuse, Brandon DeNoyer will work with last year’s ACC saves leader, Lysianne Proulx, but also a Syracuse defense that conceded 28 goals in 16 games in 2019. Courtesy of Richmond Athletics

A challenge to conceding fewer goals is integrating newcomers into the defensive line. Freshman Lindsey Brick and recent transfer Alina Miagkova both featured in head coach Nicky Adams’ first game of the season. Communication and leadership are required to ensure the new players are in the right positions to stop their opponents, DeNoyer said.

As the starting goalkeeper, Proulx will be required to be the leader of her defense. By putting teammates in the right position, Proulx may not have to make as many saves as before. Both Proulx and DeNoyer said the emphasis this season will be on shutouts instead of saves.

Leadership was a big part of Booth’s progression at Siena, as she went from a midseason starter as a freshman to the MAAC Goalkeeper of the Year as a senior. Booth credits DeNoyer for always making sure she performed at the highest level. Whether encouraging her when she’s had a rough time at practice or creating a healthy competition between the keepers in training, DeNoyer always found a way to push his goalkeepers to perform, Booth said.

Booth is now an assistant coach at NYU, and she employs many of the same drills and mantras, such as “next shot, next save.”

DeNoyer stressed the importance of creating solid relationships with his goalkeepers, and he believed that he has coached most of the goalkeepers to tell or ask anything of him. That was always the case for Booth in her four years as a player and in her one year as a coach alongside DeNoyer. Proulx agrees, even though DeNoyer has only been in Syracuse about three months.

While the mental aspect of a goalkeeper’s play is crucial, DeNoyer also likes to scout opponents and study their tendencies. If an opponent tends to cross more from the right side than the left side of the field, DeNoyer’s team will practice more crosses from the right to make sure the goalkeepers are prepared.

“Once you get to the game, it’s like I’ve already done it 60 times in practice,” Proulx said. “So, it just is a huge advantage to be prepared for a game and being confident about what you’re about to do.”

As the team enters its second season under Adams, the rest of the team may take some time to adjust to the new system. But for the goalies, preparation is already underway.

“Shutouts, that’s what we’re looking for,” Proulx said. “Yeah saves are great but we don’t win games if we concede goals right, so our goal this season is as many shutouts as we possibly can.”

The post Brandon DeNoyer seeks to turn saves into shutouts with Lysianne Proulx appeared first on The Daily Orange.