With seven minutes left in the third quarter, Boeheim’s Army already had a comfortable nine-point lead over Team Heartfire. DeAndre Kane, a new addition to BA’s squad this season, took an opportunity to score from 3-point range.

Kane went up for the shot from the left wing, but his attempt clipped the left side of the backboard and fell short. Instead of falling back on defense, Kane ran back into the paint to try and secure a rebound.

He successfully followed his missed shot before passing to Syracuse alumnus Malachi Richardson at the left corner, who would make his way to the free throw line. Kane’s hustle play extended Boeheim’s Army’s lead to double-digits.

“People that watch basketball know what wins games,” Kane said. “Hustle and toughness — and that’s what we do as a team.”

After a narrow win over No. 14 seed Forces of Seoul in the first round of The Basketball Tournament, Boeheim’s Army head coach Jeremy Pope said that the team’s struggles had to do with playing in the “11 a.m. AAU basketball” spot. With a later game in the second round — which allowed players like Kane to have extra meals like heavy pasta prior to the game — No. 3 seed Boeheim’s Army defeated No. 11 seed Team Heartfire, 68-62. Kane and Keifer Sykes, two players who recently joined BA’s roster, primarily led the team. Sykes scored a team-high 17 points.

Kane and Sykes are part of a group of four new players who were added to Boeheim’s Army’s 2021 TBT roster. But because of the team’s new changes to the lineup, players only were able to practice with each other less than a week before the start of the tournament. Pope said that was another reason behind the team’s struggles against Forces of Seoul, which resulted in a slow start offensively during the opening-round victory.

“Having guys like D.J. Kennedy and Kane on our team, they keep us poised,” Pope said. “We had our guys going, and we were lively today.”

Early in the game, Boeheim’s Army’s liveliness showed on the defensive end after shifting from the 2-3 zone that the team has been accustomed to using in the past. However, with new players on the team who aren’t connected to Syracuse and don’t know about Jim Boeheim’s 2-3 zone setup, this change was expected, Pope said. 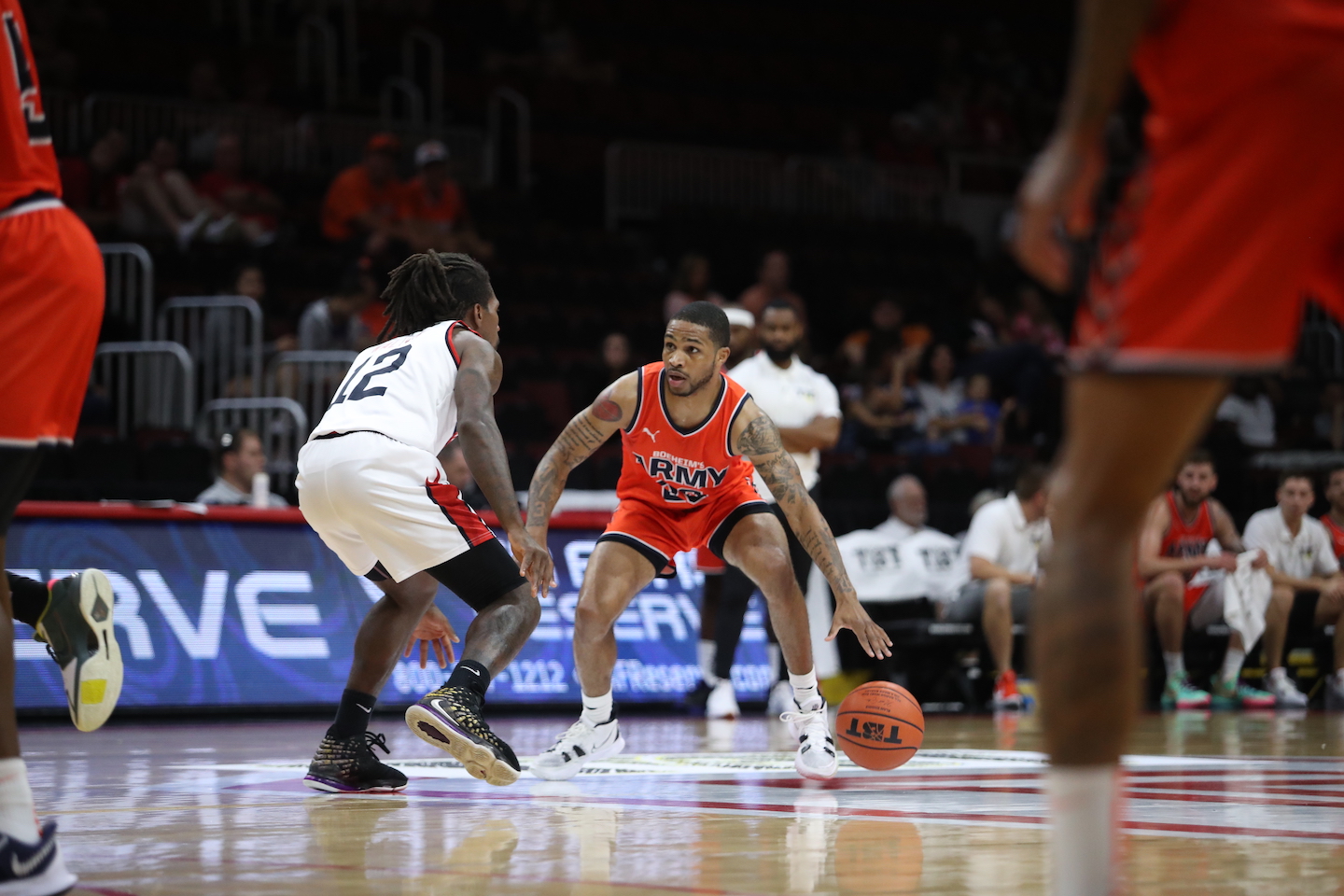 Keifer Sykes led all scorers with 17 points on 5-of-9 shooting. Courtesy of Ben Solomon

Boeheim’s Army held Team Heartfire to 14 points in the first half with its man-to-man defense, while 14 of BA’s 18 points came from first year players. Sykes, who came off the bench early in the first quarter, found the most success early in the game.

Sykes substituted into the game for Tyrese Rice, who played four years at Boston College and scored 20 points against Forces of Seoul. Rice passed the torch of the offensive load to Sykes, who hit a 3-pointer just a minute after entering the game.

While most of the offensive output came from the new players, one Syracuse alumnus made an impact in minimal time on the court. C.J. Fair, who played at Syracuse from 2010 to 2014, came off the bench for BA and finished with seven points in 12 minutes.

In the second quarter, as Team Heartfire started to fight back, Fair began working in the paint as the center in Boeheim’s Army’s small-ball lineup. Fair set up in the post before firing a turnaround fadeaway jumper, which fell short.

Still, Chris McCullough was able to get the rebound and hit Sykes for a deep 3. Less than a minute later, Fair found himself wide-open on the right corner and extended Boeheim’s Army’s lead to 10.

But in the second half, Heartfire started to come back as Boeheim’s Army’s defense started to falter. Team Heartfire scored mostly in the paint — with 24 points coming from that area — taking advantage of one-on-one opportunities against some of BA’s smaller players.

Despite Heartfire’s comeback, the team continued to play with the same intensity that its new players added to the squad, Pope said. BA was able to launch its own comeback and gain a one-point lead heading into the Elam Ending.

But at the beginning of the Elam Ending, Heartfire was able to score from deep in transition after Rice was unable to get back on defense following a missed layup. Boeheim’s Army’s offense faltered again on the next possession, but Rice was able to make up for his earlier mistake on the defensive end with a steal.

Rice got the ball off the steal and threw it to McCullough, who finished with a two-hand slam. Despite some mistakes, Boeheim’s Army’s newest players were able to make up for any falters with big-time plays down the stretch.

“There’s ebbs and flows. That’s the nature of the game,” Pope said. “We never thought we weren’t going to pull it off.”