Eric Devendorf abandoned the 2-3 zone as the ball flew from the corner to mid-court. Moments before it landed in the hands of a Men of Mackey player, Devendorf swatted the ball away and corralled it with his right hand.

With another Men of Mackey player barreling toward him, Devendorf passed in transition to John Gillon, who completed the give-and-go for an easy layup.

In its 76-69 win over Men of Mackey, Boeheim’s Army abandoned its strength – 3-point shooting – and instead focused on scoring in the paint to advance in The Basketball Tournament. Devendorf led BA with 20 points, shooting 9-for-14 from the field to go along with three steals. Three other players joined him in double-digits. Boeheim’s Army forced 18 Mackey turnovers to help build its first-half lead that withstood the Purdue alumni roster’s comeback in the second half.

“When (Devendorf’s) 50 years old, he’s still going to be competitive in the gym, at the Y,” Boeheim’s Army head coach Ryan Blackwell said. “Getting texts at 50 years old with his kids saying, ‘What’s wrong with my dad?’”

The win, Boeheim’s Army’s first, is one of four needed for the $1 million grand prize in a TBT operating differently than it has in past years. All games will be played in Columbus, Ohio, rather than in arenas across the country — including in Syracuse, where BA was supposed to host a regional for the second consecutive year. Players are expected to stay inside a hotel at all times, quarantine on their own floor and only see opponents during games.

TBT is one of the first live sporting events to return after professional and collegiate games were canceled due to the coronavirus pandemic, and it serves as an experimental basketball bubble before the NBA implements a significantly larger event in Orlando for its restart. Boeheim’s Army players needed to test negative for COVID-19 twice before arriving for TBT and will be subject to five total tests by the tournament’s end.

In between those tests, those Zoom calls with nurses and Vault Health kits, are practices and games. Boeheim’s Army lost its minicamp that usually precedes TBT and had few training options before the tournament once gyms shut down.

To compensate, Devendorf called Syracuse head coach Jim Boeheim and asked if he could “sneak through that side door” and work out in his basement. A lack of minicamp also meant the team didn’t have the opportunity to bond before the tournament, so BA played card games such as Tonk before its first game as a substitute. Big man Donte Greene said he was “plotting” those card games before arriving in Columbus. Before its first game, BA teammates admitted Greene was the best card player. 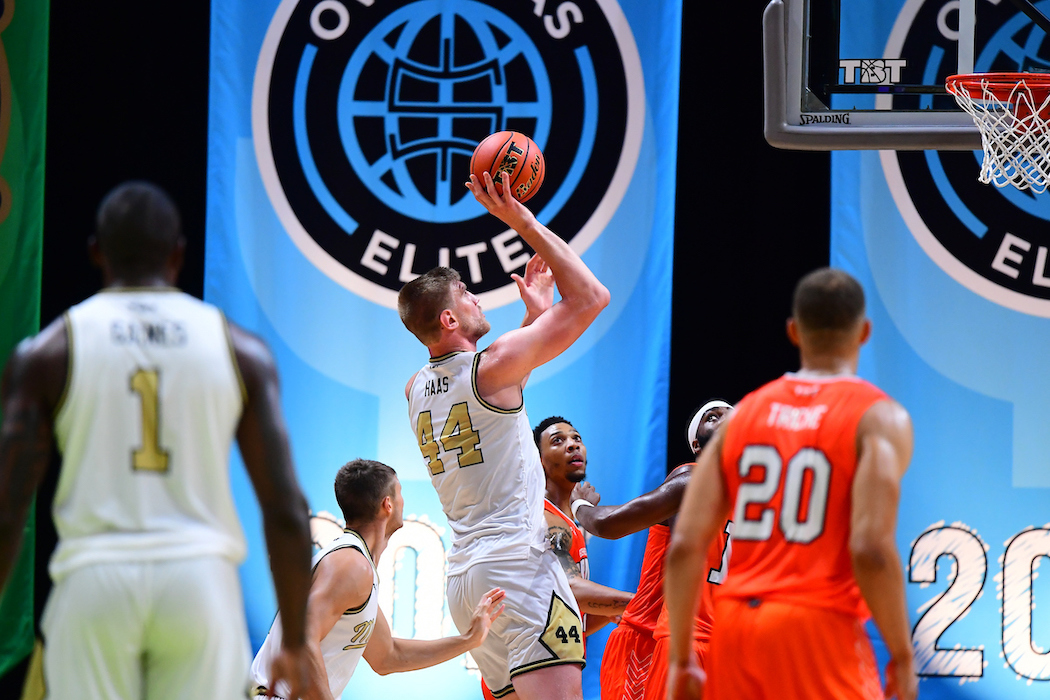 Brandon Triche scored four of Boeheim’s Army’s first six points, while Men of Mackey head coach Ryne Smith tried capitalizing on height in the paint. As the game continued, Men of Mackey emphasized Haas even more, closing Boeheim’s Army’s lead and forcing Greene into committing five fouls. While Men of Mackey attacked the paint, Boeheim’s Army shot more 3-pointers, which continued to clank off the rim. In the third quarter, Haas received a pass on the low block, spun to the left away from defender Will Rayman and was fouled on a layup attempt. He then calmly knocked down both free throws. Soon after, Men of Mackey briefly took the lead for the first time since the first quarter.

“It’s pros out here,” Greene said. “It’s not a slouch tournament at all, everyone here can play.”

Midway through the fourth quarter, momentum slowly swung back in Boeheim’s Army’s favor. With the game tied 58-58, Triche drove to the left side of the hoop, spun right, away from his defender, and finished the uncontested layup.

While BA shot less than 20% from behind the arc, it converted 28-of-32 free throws. After collecting a defensive rebound with 4:12 left in the fourth quarter, BA’s Rayman was fouled and hit both free throws to take a 68-63 lead.

But Men of Mackey’s comeback continued as it cut Boeheim’s Army’s lead to two, 68-66, before the Elam Ending began. But Devendorf, a constant on every Boeheim’s Army team, scored the first basket to give BA a 70-66 lead — six points away from the target score of 76. After the 2-3 zone forced a Men of Mackey turnover, Smith called a timeout for Men of Mackey, but Andrew White hit an open mid-range 2, followed by a Richardson made free throw.

After a missed jumper on the next Men of Mackey possession, Boeheim’s Army raced up the court in transition offense, which scored 13 points off turnovers. Greene passed up a potential game winning three and Haas inside for a layup.

Boeheim’s Army’s altered strategy was working. Meanwhile, Men of Mackey tried to use the same game plan that had been productive through the and tournament: Pass the ball to Haas in the paint.

Haas caught the ball with his team on the brink of elimination and began to back down Greene. The former Syracuse big then poked the ball out of Haas’ hands, Men of Mackey’s 18th turnover of the game. Greene said after the game that since he turned pro, he’d honed his defensive craft.

That allowed a full-court pass to Triche, sprinting down court and drawing a foul. The winningest Syracuse basketball player then walked to the foul line and clinched the game with a free-throw winner.

“He probably outweighed me by at least 50, 6o pounds and he’s three or four inches taller than me,” Greene said of Haas. “When he brings the ball down I try to take advantage of him. You know I have some quick hands, I think Boeheim would be proud of me.”

The post Boeheim’s Army holds off Men of Mackey, 76-69, in TBT’s Round of 16 appeared first on The Daily Orange.