As Boeheim’s Army entered the Elam Ending with a ten-point lead, the opposing team’s fans looked to disrupt BA’s rhythm. With the game in Peoria, Illinois, Always a Brave, the alumni team of Bradley University, was the hometown favorite, and AAB fans made up a majority of the arena.

With every basket Always A Brave made during the Elam Ending, or every basket BA missed, the crowd shouted in excitement. The screams crescendoed when Boeheim’s Army’s Chris McCullough was called for an offensive charge as BA was still six points away from ending the game.

But on the other end of the floor, Boeheim’s Army got their chance. Keifer Sykes stole the ball from AAB and found D.J. Kennedy for an easy layup. Always A Brave attempted to score but fell short, handing BA another opportunity in transition.

Instead of Kennedy, DeAndre Kane split himself from the pack and finished with a layup on the right side. Kane waved and laughed to the crowd as the screams had turned into whispers with Boeheim’s Army’s impending victory.

“Energy, intensity and focus,” Sykes said about the main benefactors in Boeheim’s Army’s success. “This was a great test for us with the crowd.”

With seven teams already securing a trip to Dayton, Ohio — where the TBT quarterfinals will take place — Boeheim’s Army had its eyes on the last remaining spot. In Peoria, Illinois, on the home court of Always A Brave, BA successfully punched its ticket. In an offensive onslaught, Boeheim’s Army defeated Always A Brave 69-54. McCullough led the team in scoring with 19 points and seven rebounds.

While non-Syracuse alumni like Tyrese Rice and Sykes controlled the floor in previous games, former Syracuse player and NBA first-round pick McCullough dominated on both ends throughout the opening quarter.

McCullough started on the offensive end, scoring Boeheim’s Army’s first points on a tough layup. On defense, BA began the game with a man-to-man defense that head coach Jeremy Pope said the team would use if its regular zone defense was not working. 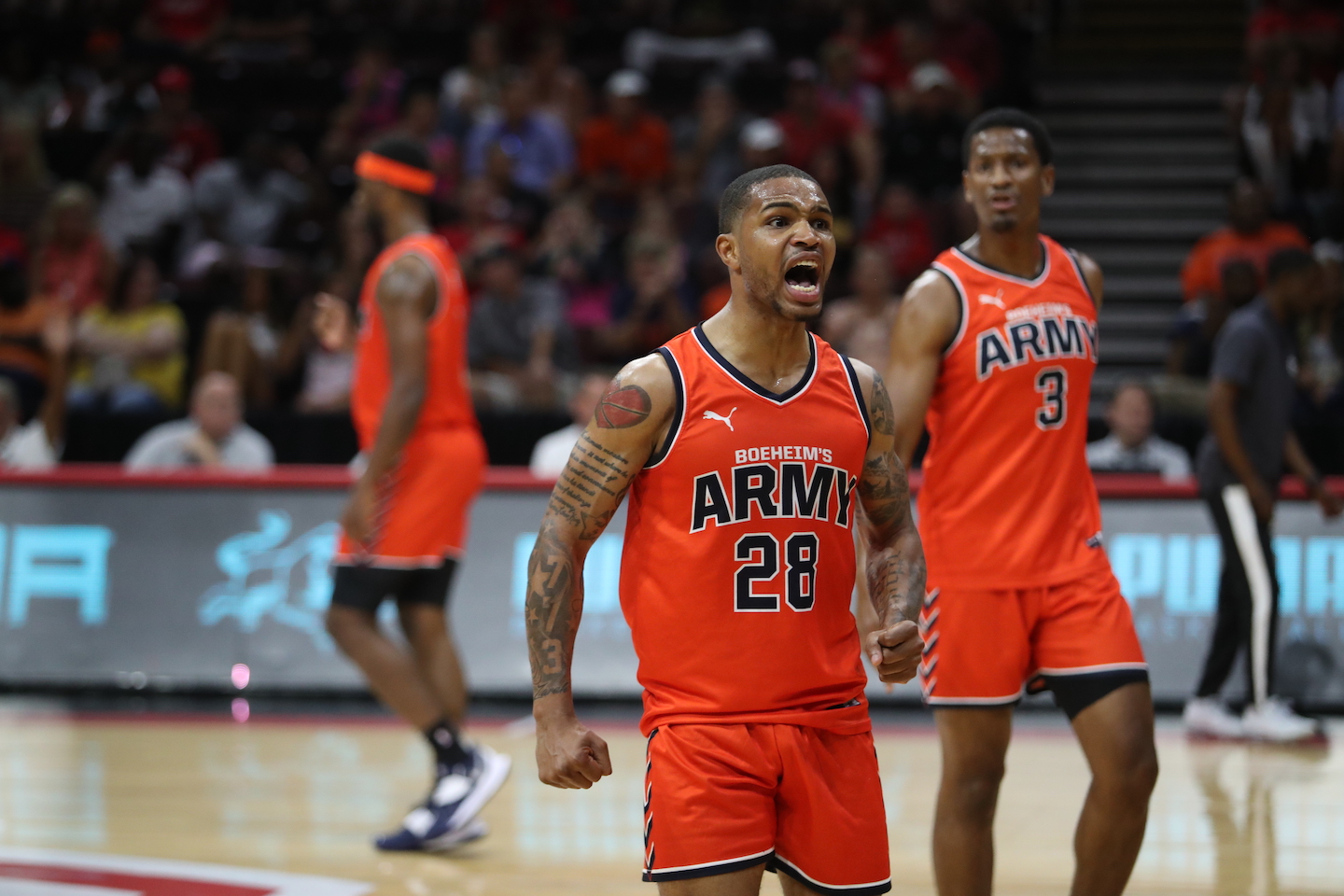 Despite being familiar with the zone, McCullough found success in the new look by maintaining a presence in the key and challenging the opposition. He notched a block in each of AAB’s first two possessions, both leading to points for BA on the other side of the court.

McCullough notched 10 of Boeheim’s Army’s first 12 points and continued to find open shots all around the court against AAB’s aggressive defense. He finished 7-11 from the field with three blocks, including one crucial denial on the last play of the game.

“This is the year for us to get the championship,” McCullough said. “I have to play aggressive, doing the little things and keep going out there and get wins.”

With a cushion created by McCullough’s first-quarter performance, Pope decided to substitute out the entire starting lineup for BA’s next five players, which continued the early momentum in the second quarter.

BA’s success came from familiar names like Tyler Lydon and Eric Devendorf — who recorded a combined nine points in the second quarter. But Andrew White III, who rarely played in previous games this tournament, caught fire from deep.

At the beginning of the second period, Always A Brave’s Marcellus Sommerville hit a three-point shot to cut Boeheim’s Army’s lead to 17-15. But after baskets from Lydon and C.J. Fair, Sykes stripped the ball from Sommerville before sprinting down on the fastbreak.

Sykes’ shot didn’t fall, but Fair was able to secure the rebound and pass to White, who positioned himself at the left wing. BA successfully turned defense into offense again as White drilled the three.

AAB answered back with a pull-up jumper on the ensuing possession, yet White moved into open looks. As AAB’s defense collapsed on Devendorf, White maneuvered from his original position on the left wing to the right corner for the score. Then, Devendorf took his own opportunity to score from long range at the opposite corner, marking three straight threes for BA.

This offensive explosion caused Always A Brave to shift into a half-court press to neutralize Boeheim’s Army’s offense. Although this strategy worked against some of BA’s possessions, Boeheim’s Army still found success by moving the ball in transition.

The first fastbreak attempt began off a steal from Malachi Richardson in the paint. Richardson found Kennedy streaking down the middle of the court, and Kennedy lobbed the ball to Rice for a three-pointer. Rice sunk the shot and less than two minutes later, Boeheim’s Army found another chance to push the pace.

Later, Kennedy forced his way into the paint where two defenders had caught up with him. Kennedy turned and saw Rice at the same spot as the last possession, hitting him again for a three-point attempt. Rice found the bottom of the net as his defender’s hand slammed his face.

As Boeheim’s Army expanded on its lead, AAB fought back with the home crowd on their side. After Rice’s threes gave Boeheim’s Army a 15-point lead, BA only hit three more baskets for the rest of the third quarter.

Boeheim’s Army’s struggles came with rebounding on key possessions, allowing AAB to get second chance opportunities late in the game. But Sykes said that the team’s chemistry, which has developed in the last few games, helped the team bounce back from these issues and maintain a ten-point lead by the beginning of the fourth quarter.

“We gave up a couple of offensive rebounds,” Sykes said. “But when we lock in our intensity, athleticism, quickness and ability to swarm, the ball is better.”

In the last period, Boeheim’s Army utilized the same formula which worked for them in each of the previous quarters: driving to the basket and finding outside shooters. Instead of Rice and White, Sykes took his turn from behind the arc, hitting an open three-pointer off a pass from Devendorf.

On the next possession, Sykes curled back to the same spot where he hit the last dagger. Sykes shifted away from Boeheim’s Army’s usual offensive strategy while simultaneously moving his defender by hesitating on a three-point shot. He drove hard to the basket and finished with contact to add to BA’s lead, one it would not relinquish.

“We just have a bunch of unselfish high character guys,” Pope said. “That’s been the foundation of our team.”

The post Boeheim’s Army advances to quarterfinals with 69-54 victory over Always a Brave appeared first on The Daily Orange.