In Syracuse’s 2021 national championship game loss, Boston College’s Charlotte North led all scorers with six goals. The Tewaaraton winner routinely started most of her dodges at the top of the 8-meter, using her footwork to cut through the Orange’s backline for each score.

But during last week’s rematch, North was guarded one-on-one by SU defender Bianca Chevarie. In the game’s opening minutes, North stood behind the cage and Chevarie used aggressive stick checks to stop her. The Atlantic Coast Conference’s top goal-scorer — who averages 4.25 goals per game, one of the best marks — finished the night with only three goals.

Before this season, Chevarie didn’t even play on the backline. In her first two seasons at Syracuse, Chevarie was an attacker and a midfielder, making the switch to defense in 2022 after the Orange lost three of their four starting defenders from last year’s team. Syracuse head coach Kayla Treanor said it was a decision the coaching staff came to in the fall, as Chevarie provided a strong defensive presence from the left side.

Chevarie’s play has been noticeable, as she’s become one of SU’s best defenders on a unit that includes Tewaaraton Award nominee Sarah Cooper. Chevarie has the second-most ground balls and third-most caused turnovers on the Orange.

Hanna Burnett, who coached Chevarie in her final two years at Everest Academy in Canada, said she’s seen Chevarie quickly adapt to position changes before. At 16, Chevarie played for Team Canada’s senior team in the 2017 Women’s Lacrosse World Cup in England, something Chevarie described as a “shock period.” Burnett saw Chevarie make a defensive impact at that level despite playing against older players.

Chevarie and the rest of Canada’s defense only allowed a combined seven goals during the quarterfinals and semifinals, which earned Canada the silver medal. Burnett said that Chevarie’s willingness to play other positions has now helped her fill into a solid defensive role.

Chevarie played defense when she first started playing the sport, said Don Chevarie, her father. But it was only because the coaches wanted to give players time at each position.

Her only defensive experience came through ice hockey, which Chevarie played for eight years as a defenseman. Hockey helped Chevarie as a midfielder, Don said.

“(Hockey) helped her read the play a little better when they’re coming down the field,” Don said. 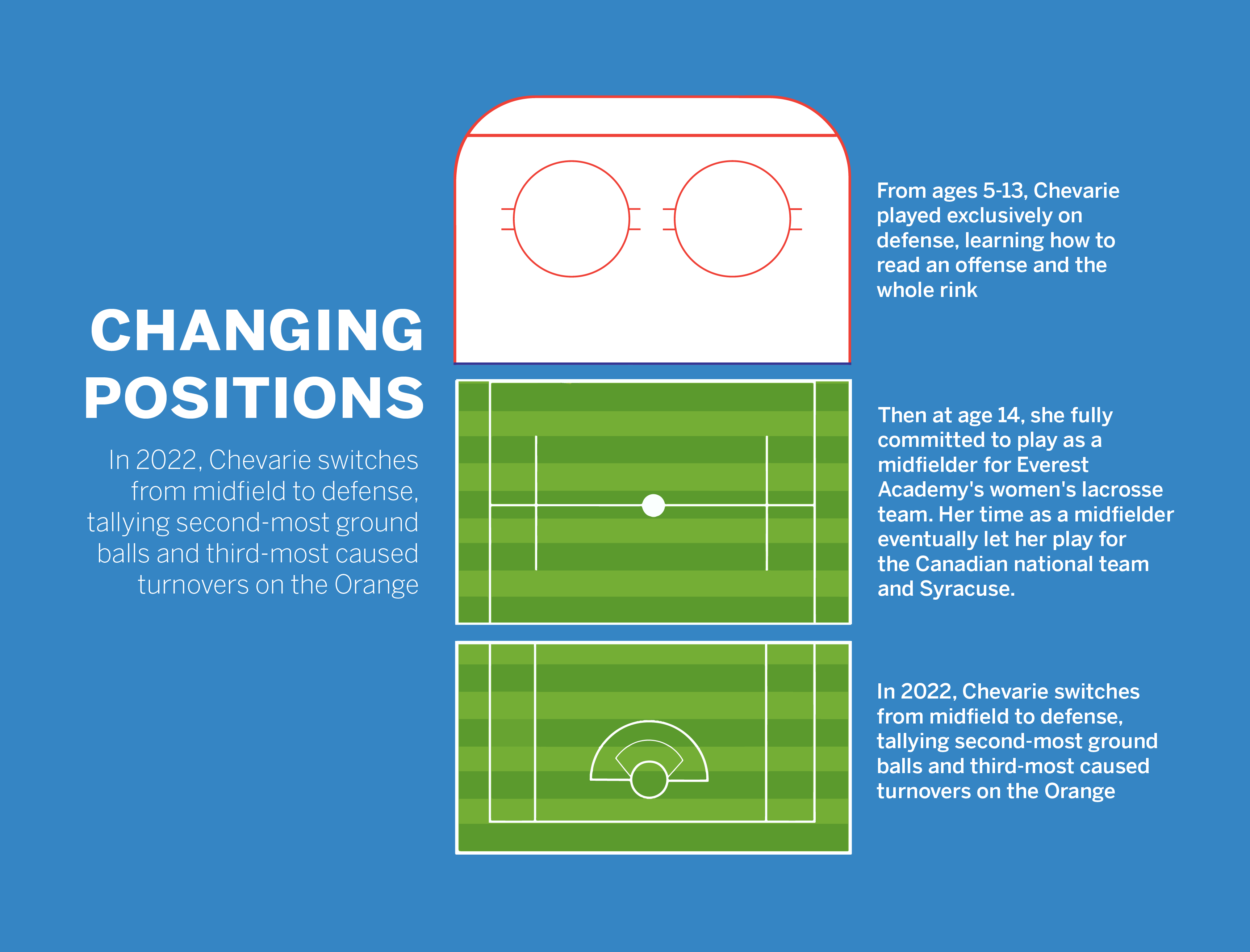 Chevarie has fought for ground balls as a defender for the Orange. Against Duke in early March, Chevarie led SU in ground balls with four, tying the most in a single game this season. Her first one came in the second quarter during the Orange’s largest comeback of the season. Chevarie pressured Anna Callahan enough to knock the ball free and collect the loose ball, leading to an SU clear and goal to help it win over the previous-undefeated Blue Devils.

Taylor Milburn, Chevarie’s coach during her first two seasons at Everest, said that the former midfielder was strongest at deceiving opponents with her footwork and ambidextrous abilities. But as Chevarie transitioned to defense, Milburn found that Chevarie’s other skills as a midfielder, like communicating on switches, helped her make the leap.

Don said Chevarie looked comfortable against Boston College and more specifically covering North, and he added that the Eagles’ best attacker only scored one even-strength goal with Chevarie covering her. The other two came when BC was on the woman-up.

But Chevarie didn’t just hold North to three goals. The defender also forced turnovers from the Tewaaraton recipient. As North cut into the 8-meter to try and get a step ahead of Chevarie, she was unable to shake off the defender. So when Eagle Jenn Medjid sent a pass from behind the net, Chevarie poked North’s stick and forced the ball loose.

“She did a great job and she played fearless. We stuck with it because she was doing so well,” Treanor said of Chevarie’s play. “It definitely gives us more flexibility and options for our defensive matchups.”

The post Bianca Chevarie uses versatile past to transition from midfield to defense appeared first on The Daily Orange.