Pittsburgh came to the Carrier Dome last season and beat the Orange, 27-20, marking the second-straight win in the series between Syracuse (0-1, 0-1 Atlantic Coast Conference) and the Panthers (1-0). Pittsburgh thrashed Austin Peay 55-0 in its opener, while SU fell 31-6 to No. 18 North Carolina.

To learn more about the Panthers ahead of Saturday’s game, The Daily Orange talked with Craig Meyer, who covers Pitt football for the Pittsburgh Post-Gazette.

The Daily Orange: What’s one thing different about this Pittsburgh team from teams in the past?

Craig Meyer: The biggest thing for me is that there’s some semblance of balance that it hasn’t had in the past few years. In 2016, Pitt had an explosive offense featuring several future NFL players that put up 43 on the road against eventual national champion Clemson, but its defense, particularly its secondary, was sieve-like. Last year, the Panthers had one of the better defenses in the country, but their offense languished and finished the season ranked among the bottom 25 FBS teams. Things have never seemed to line up at the right time for them under Pat Narduzzi, which is a pretty fitting state of things given the program we’re talking about.

This season, at least on paper, seems to be different. Most of that overpowering defense is back – minus standout defensive lineman Jaylen Twyman, who opted out of the season – and is overseen by one of the better defensive coaches in the sport in Narduzzi. Offensively, they’ve got a quarterback in Kenny Pickett who is in his third season as a starter. Helping him out are a number of talented receivers that have a nice blend of talent and experience. For the first time in four years, it appears as though they have something more than a warm body at tight end.

Pitt’s 55-0 win last Saturday against Austin Peay may seem like an ordinary rout of a woefully overmatched FCS team, which it might be, but this is the kind of game for Pitt in recent years that would have been unreasonably close. Narduzzi said after the game that he wanted to show this team would be different. It’s something that, from the head coach on down, people in the program really seem to believe is the case.

D.O.: Pitt’s defensive line is known as one of the best in the country, how do you see them matching up in the trenches with Syracuse?

C.M.: It’s a really stout group, though it remains to be seen whether standouts Rashad Weaver and Keyshon Camp will be playing, as both defensive linemen weren’t in attendance for the Austin Peay win (Pitt had announced before the game that seven players wouldn’t be there due to “COVID-related protocols,” so it’s safe to assume that was the case, though Pitt wouldn’t officially confirm it). Without them, Pitt had three sacks against a much smaller Austin Peay team, though it did dominate the line of scrimmage, even if it didn’t always end with dropping the quarterback.

Last year, Pitt had nine sacks against Syracuse and last week, the Orange gave up seven sacks against North Carolina and didn’t even average two yards per carry. Given those factors, and if Weaver and Camp are back, it could get ugly once again. 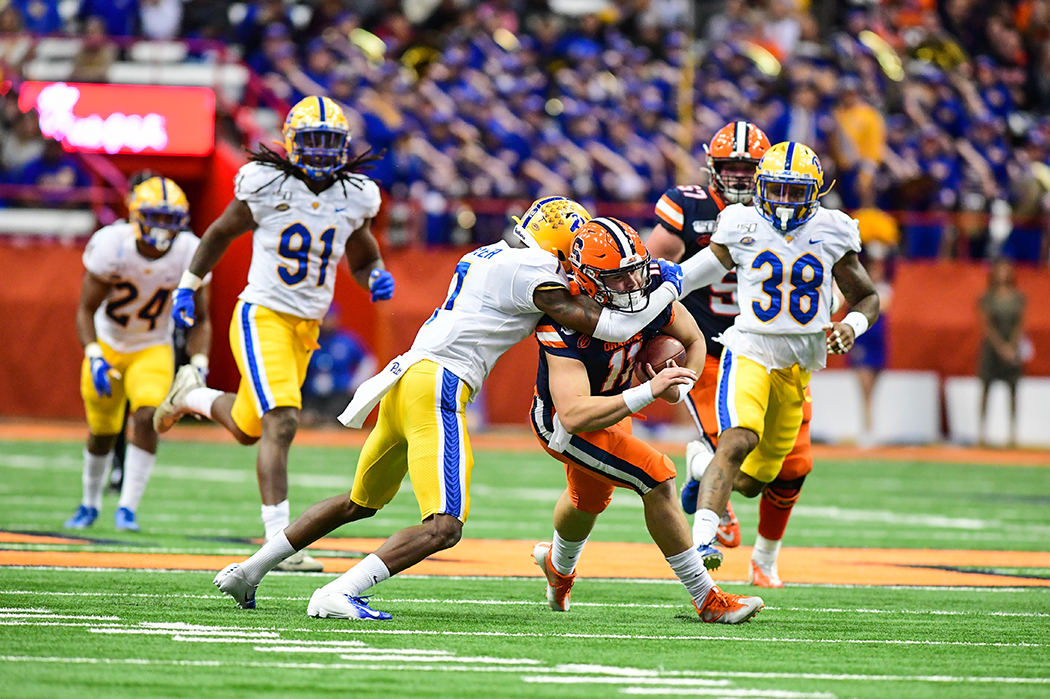 D.O.:  How has Kenny Pickett developed in his time as Pittsburgh’s starting quarterback?

C.M.: It has been an interesting journey for Pickett. I think expectations were unfairly inflated for him after he led Pitt to a stunning win against then-No. 2 Miami in the 2017 season finale. Perhaps it was that that made his sophomore and junior seasons seem disappointing, but there were other factors that played into that. He frequently seemed uncomfortable in the pocket, more content to scramble and have a play break down before it could really begin in earnest. His decision-making was questionable in some moments. The Panthers’ most success as a team came when he was a sophomore and, with a pair of 1,(1)00-yard rushers behind him, largely a game manager, someone who would often not exceed 20 pass attempts in a game.

Some of this wasn’t his fault. He was leaned upon heavily from a young age and, as a freshman and sophomore, played for an ineffective offensive coordinator in Shawn Watson. Last year, there was the adjustment to a new offensive coordinator in Mark Whipple, who brought with him a drastically different system than the one Watson employed. As the season progressed, Pickett looked increasingly comfortable, setting career highs for a season in completion percentage, yards and touchdowns. Granted, part of that had to do with him throwing the ball significantly more, but the progress was nonetheless apparent, even if he wasn’t exactly spectacular.

In his second season under Whipple’s guidance, he seems primed for a strong season. At the very least, in the Austin Peay game, he showed a much better ability to connect on the deep ball, something he has struggled with for much of his career. Of course, that was against Austin Peay, but it was as good as I’ve seen him look in his time at Pitt.

C.M.: Between injuries and graduations, they’re a bit thin at cornerback, which can be especially tough given that Narduzzi’s defensive scheme puts its corners on a bit of an island. I would think that the safety tandem of Damar Hamlin and Paris Ford should be more than enough to shore up the secondary. So, with that said, I’ll probably go with the running backs. It was a pretty atrocious group last season, averaging only 3.5 yards per carry. Part of that had to do with some problems along the offensive line, but nobody really emerged at that position, which is a bit strange given Pitt’s recent history of players at that spot. Their best chance at that position is a by-committee approach, which seemed to work well against Austin Peay. The hope is that younger players like Vincent Davis, who had a team-high 11 carries for 47 yards and two touchdowns last week, can mature with another year of experience and that newcomers like Israel Abanikanda can provide the backfield with some of the skill and talent it clearly didn’t have last year.

D.O.: Who do you think wins on Saturday, and by how much?

Syracuse hung for three quarters with a North Carolina team that’s at least as good as Pitt — and is quite possibly better — so I don’t want to dismiss the Orange’s chances too much. But I think the Panthers’ defensive line against the Syracuse offensive line is a colossal mismatch and that Pitt will be able to produce more than enough offensively to win fairly comfortably.