Matt Oja doesn’t like to bring his phone with him to Syracuse games in the Carrier Dome.

Oja has been going to SU games since he was an infant. His parents both taught at the university. He’s an SU law graduate from the Eastside, and he likes to keep his old ticket stubs in a collection that dates back to at least 1983.

Oja’s phone isn’t a smartphone, though. After working 55-60 hours a week in front of a computer screen, he uses SU sporting events with friends as a way to unplug. But because of a change in Syracuse’s ticketing policy, his game day experience may be different when fans are allowed to return to the Carrier Dome again.

In July, SU announced that the Dome was transitioning completely to mobile ticketing, citing improved security, contactless entry and convenience. It’s a decision that falls in line with sporting events and concerts across the country, as MLB and many other colleges are moving to paperless tickets that can be downloaded and stored in phone wallets. The Orange won’t be mailing out season tickets anymore — instead, they’ll be sending them electronically.

“It seems less than inclusive when we talk about the fanbase as a whole,” Oja said. “Our society seems to be trending in being inclusive in terms of giving people more options to pay or attend games. This seems to be more exclusive than inclusive.”

For most fans, the move to mobile-only ticketing will be a seamless transition: download tickets on their MyCuse smartphone app, log in before going to the gate, show their barcode to the ticket usher, and enter the Dome.

But for some, the death of the paper ticket eliminates the nostalgia of keeping stubs as mementos of sporting events. It could lead to longer lines at the Carrier Dome entrance, and for Oja, it means he’ll need to use one of his friends’ phones to store his ticket and enter the Dome.

The switch also forces season-ticket holders who aren’t tech savvy, namely older ones, to have smartphone capability for attending games. Whether that’s purchasing a smartphone, buying a data plan or finding a friend with a phone to go to the game with, several people who spoke to The Daily Orange said it is an undue burden on them.

For Bob H., who chose not to give his last name, a Penn State graduate who lives in the area and attends about four SU football games and more than a dozen Syracuse basketball games each year, he’ll no longer be able to save ticket stubs.

Whether it’s Grateful Dead concert tickets or the Montreal Canadiens 1978 Stanley Cup clinching victory in Boston, Bob saves memorabilia and stubs in a wooden box and a binder in his home. The ticket stubs are how the fond memories from historic events stick in his mind, he said.

He’s willing to pay a few extra dollars for the processing costs of making a paper ticket if it means he’ll be able to keep it. At Buffalo Bills games, that means paying $5 extra, Bob said. At SU, it’ll no longer be an option.

The Dome doesn’t have great cellular service or WiFi capability, multiple people said, which are important factors to open the ticket on the internet — if it hasn’t already been downloaded into an Apple Wallet, for example. 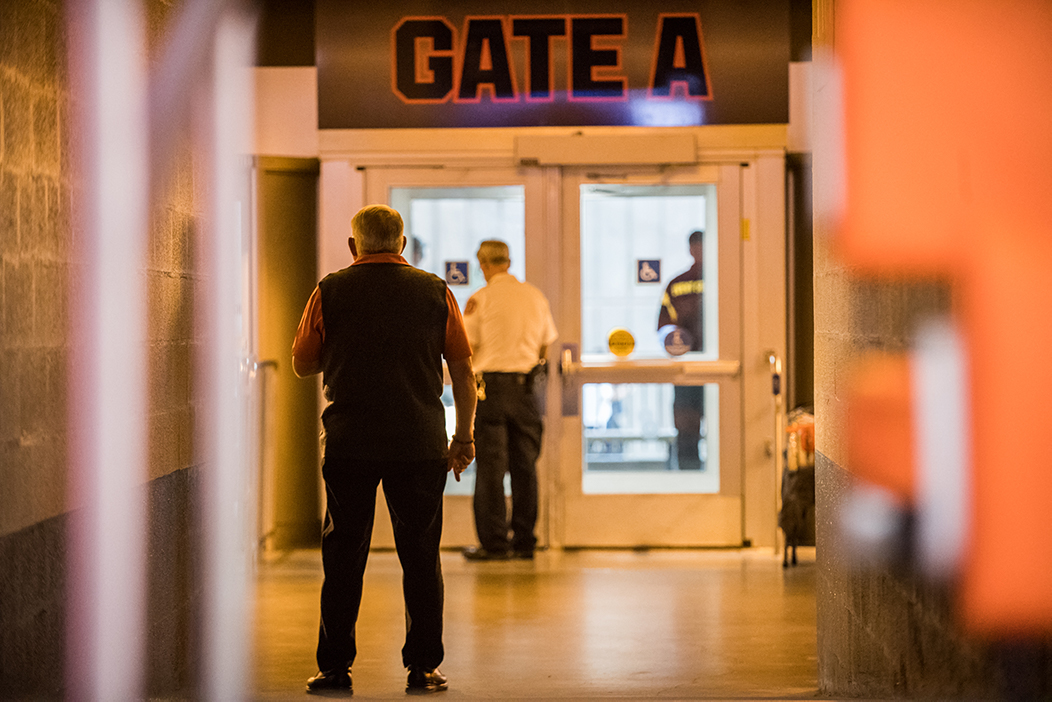 Syracuse isn’t going from entirely paper to entirely mobile, though. According to SU’s July press release, 25% of Syracuse football tickets and 30% of SU men’s basketball tickets were scanned via mobile devices in 2019-20. Syracuse’s student tickets were also entirely mobile for the 2019-20 season. When the Orange played Clemson, their largest football attendance of the year, some fans waited up to an hour at the gate and missed the opening kickoff due to slow phone service.

“If it’s a 7 p.m. game, people show up at 6:45 and want to get in,” Bob said. “The lines with regular tickets back up, but with mobile tickets, it’s not a quick process. Until they improve that greatly, it’s not going to go smoothly. I’ve seen it at many, many events.”

The gap is generational, as most young fans and students are seamlessly transitioning to mobile. But not everyone has smartphones.

“I think our society seems to be trending in being inclusive in terms of giving people more options to pay or attend games. This seems to be more exclusive than inclusive.”

“SU better figure this out because they’re going to lose some of their older fans,” Bradwick said. “They may not be going to games anymore because they’ll say, ‘I’m not getting a smartphone.’

Syracuse said in the July release that fans without smartphones could call the Dome box office to “talk through their ticket options,” but paper tickets won’t be provided.

Some fans cited a New York llaw that says consumers must be presented with the option of having a paper ticket if they so choose. The law specifies that if an e-ticket is presented at the same cost and can be transferred amongst people for no additional cost, that is acceptable. One New York lawmaker, State Sen. Joseph Addabbo (D), Chair of the Racing, Wagering and Gaming committee, said that sports teams should offer both.

“Not everyone has access to the internet,” Addabbo said.“The idea here is that you have to offer both, whether you offer ticketless or not. Over the course of time, the paper tickets will decrease because mobile has become such a big part of our lives.”

Because of the COVID-19 pandemic, it might be a long time until the Dome is full again. But when that happens, in spring 2021, fall 2021 or later, the Orange will have dramatically overhauled its ticketing process, by choice.

The consequences of that decision filters down to the fans, some of which will have their pregame convenience affected, by force.

“I’ve never tried it before but it looks like one of those things that’s going to be part of our future,” season-ticket holder Steven Chappell said. “I don’t like change but here it comes.”

The post As Syracuse transitions to mobile ticketing, some fans feel left behind appeared first on The Daily Orange.