Down 2-1 in the third inning of Syracuse’s series opener against Notre Dame, Angel Jasso reached base on a fielding error by Brooke Marquez. On the second pitch of Tessa Galipeau’s at-bat, Jasso took off for second.

She reached safely, marking her first stolen base of the afternoon. Two batters later, Jasso rounded the bases to tie the game at two after ND pitcher Payton Tidd couldn’t cleanly field a dribbler off Taylor Posner’s bat.

In the fifth inning, Jasso led off with a walk, and once again, on the second pitch of Galipeau’s at-bat, stole second. The Orange were unable to capitalize, but Jasso finished the game with three stolen bases — tying SU’s single-game record. Her last stolen base came in the bottom of the seventh inning with the Orange trailing 5-2 and down to their final out. Jasso had just hit her second double in three at-bats, and she swiped third before a Kelly Breen strikeout ended the game.

With four games left in the regular season, Jasso has recorded 21 stolen bases, the most on the team by a double-digit margin. Aside from Jasso, only Posner and Carli Campbell have stolen more than five bases for the Orange, with six and seven, respectively.

After the ND game, Jasso said she was looking to be “very aggressive” on the basepaths, citing an agreement with head coach Shannon Doepking as extra motivation, where if Jasso steals 25 bases on the season, Doepking will buy her a new pair of shoes.

Jasso’s 21 stolen bases are also the most any Syracuse player has recorded since 2014 when Shirley Daniels — SU’s all-time leader with 85 career stolen bases — stole 24 bags after notching 35 the year before, which set the program’s single-season record.

“To see someone else perfect something that is overlooked or seen as maybe not as important or as big in the game, I think is really cool,” Daniels said. 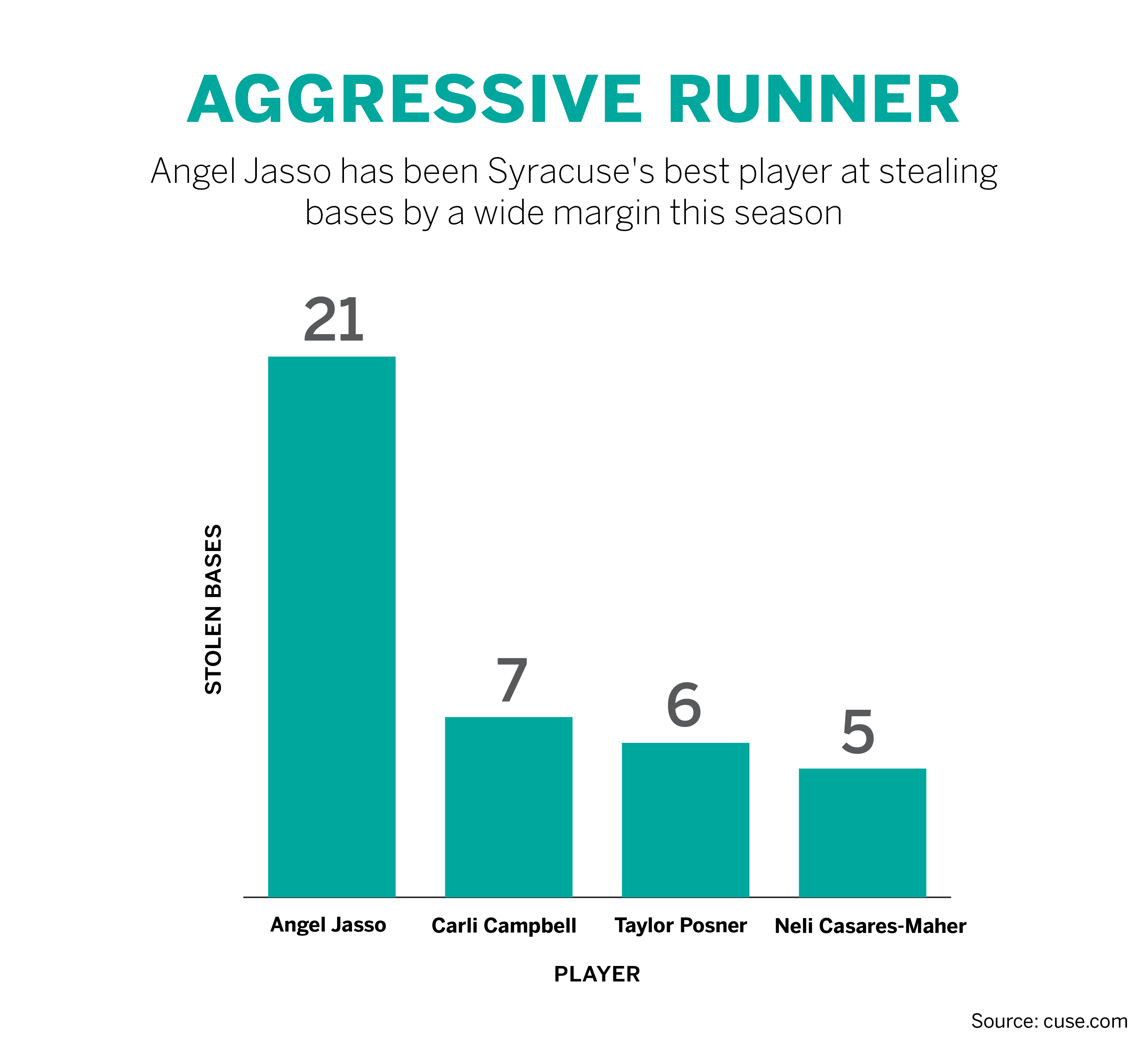 Daniels said a player’s ability to reach base is an overlooked aspect of the art of stealing bases. Her career on-base percentage of .391 ranks just outside the top ten in program history, and it gave her more opportunities to steal bases. Jasso currently leads Syracuse with 43 hits and a .364 batting average, while her on-base percentage of .423 ranks second only to Galipeau’s mark of .425.

Daniels said getting a good jump once on base is the key to successfully swiping a bag. She mainly focused on knowing how to time her takeoff based on when the ball left the pitcher’s hand and making sure her first few steps were “hard and fast,” she said.

“It’s definitely something you can work on but I think after a while it almost becomes second nature,” Daniels said. “Even before games or when you’re not on the bases and you’re watching the pitcher do her wind-up, that was something I would watch for — trying to time it right,” Daniels said.

Despite playing in 39 of the team’s 44 games as a freshman last season, Jasso only recorded four stolen bases on six attempts. Part of that can be attributed to her .262 on base percentage.

There is no specific pitch during an at-bat that Jasso prefers to take off on, she said on April 8. Instead, being unpredictable when she decides to steal gives her an advantage as the base runner, which has helped her success rate while also adding a pivotal element to Syracuse’s offense this season.

“Stealing on different pitches and keeping the catcher on her toes is one of the biggest things that I’m (trying to do),” Jasso said.

The post Angel Jasso looks to be aggressive as Syracuse’s top base-stealer appeared first on The Daily Orange.