Before Andre Szmyt ever lined up for a field goal, he had a feeling he could do it. He’d joke with his mom, asking “What’s the big deal?” when he saw field goal kickers on TV.

Like many great placekickers, Szmyt started on the soccer pitch, where he played forward for his club and high school teams. He absolutely could’ve played in college, his mom Lala Szmyt said, because he was a natural athlete with a knack for accurate, strong boots. He scored multiple goals directly off corner kicks, bending the ball past goalkeepers, Lala said.

One spring day in 2016, Szmyt’s dad brought him to a nearby football field to see what he could do. Szmyt started with 35-and 40-yarders. He sent kicks through the uprights, but something didn’t feel right. He took off his soccer cleats and kept making them, backing up until he could no longer reach.

“He was making them barefoot,” Eric Szmyt said. “But he was very consistent…Something that Dino’s (Babers) said over the years is that Andre is the most consistent kicker he’s seen. I think that goes to that. Right off the bat, first time kicking out, he puts the ball in the same spot.”

Not long after his first foray into kicking, the then-rising senior went out again, this time with a few friends on the football team. Szmyt kept his cleats on and nailed three consecutive 50-yarders. One of his friends filmed Szmyt on his iPhone and sent the clip to Vernon Hills (IL) head coach Bill Bellecomo.

Szmyt was done with soccer, but his football career was just beginning.

Szmyt played one season with Vernon Hills and went 9-for-12 on field goals, including a school-record 48-yarder, while also punting and taking kickoffs. He helped his team reach the Class 5A state championship game and earned the attention of Dave Boller, then a recruiter at Louisville.

Lala wanted her son to be a Cardinal, but when they were driving to the Louisville campus from their home outside Chicago, she received a text message from Boller: I’m not at Louisville anymore. I resigned.

Boller ended up at Syracuse, and Szmyt followed as a walk-on in 2017. A Lou Groza Award and 56 field goals later, Szmyt is the three makes away from tying Syracuse’s field goal program record. Though he has two years of eligibility remaining, Syracuse’s season finale against Notre Dame is his last chance in 2020 to reach the pinnacle of SU’s prestigious placekicking lore.

The Orange looked in control early in the third quarter of Syracuse’s 2017 matchup with Wake Forest. Placekicker Cole Murphy, whose parents had traveled all the way from Southern California to attend the game, drilled a 47-yarder to give SU a 41-27 lead. The kick made Murphy Syracuse’s all-time leader in made field goals.

“It was pretty special,” Murphy told The Daily Orange in October. “Honestly, I’m really proud of the record.”

The Orange ended up blowing their lead that Saturday, one of five straight defeats they would end the year with after upsetting No. 2 Clemson. But Murphy was a semifinalist that year for the Lou Groza Award, awarded to the nation’s best kicker.

Murphy practiced every day with Szmyt, then a redshirt freshman. The two kicked with opposite styles. After kicking the ball, Murphy keeps his eyes on the spot where the ball’s placed, while Szmyt follows it through the goalposts.

“We always had fun in practice,” Murphy said. 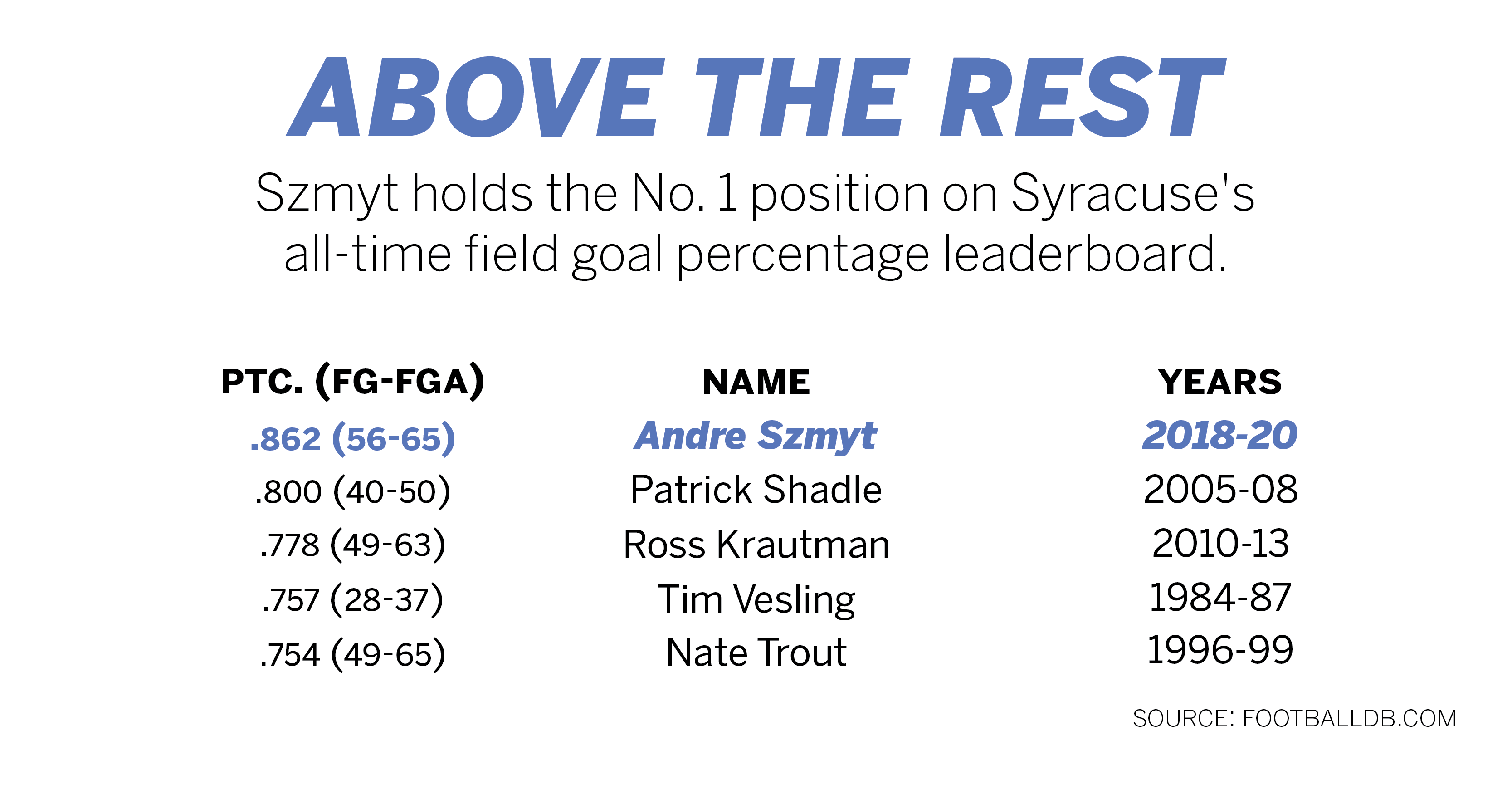 Kicking at Syracuse isn’t quite a fraternity, but Murphy and the former record-holders who spoke with The D.O. said they feel a special connection with each other through the eras. Whenever Szmyt breaks Murphy’s record, Murphy said he’ll be watching with a smile on his face and will call Szmyt to tell him how proud he is.

“As a player, I love having that record,” Murphy said. “But at the same time, I don’t want to be the record-holder. I want someone to surpass me. Because that means our team is doing better, and that means our quality specialists are better.”

Although Syracuse’s offense hasn’t always put him in scoring positions this year, Szmyt has still climbed the all-time leaderboard in 2020. His two boots in the season-opener in Chapel Hill passed Don McAulay, who played for head coach Dick MacPherson in the early 1980s. One more field goal the next week against Pittsburgh put Szmyt into fourth place all-time, above both Ross Krautman and Nathan Trout.

“We have a huge, huge history of great specialists,” Murphy said. “(Four-time NFL Pro Bowler) Gary Anderson, Ross Krautman, myself, Andre… For (Szmyt) to not only break it but absolutely destroy that (all-time) record, that’s monumental.”

The nature of the fast-paced, offense-friendly modern college football game — especially head coach Dino Babers’ offense — has at times boosted Szmyt’s opportunities. But he’s maintained elite accuracy, recording an 86.2% field goal percentage, a mark in the top-15 since 1956 that’s unmatched by anyone who’s ever worn an Orange jersey.

“Our kickers are not like everybody else’s kickers,” Babers said in a press conference. “These guys, not only do they have the right attitude, but they’re made of the right stuff. I think we’ve got a good group, we want to keep that tradition going on.” 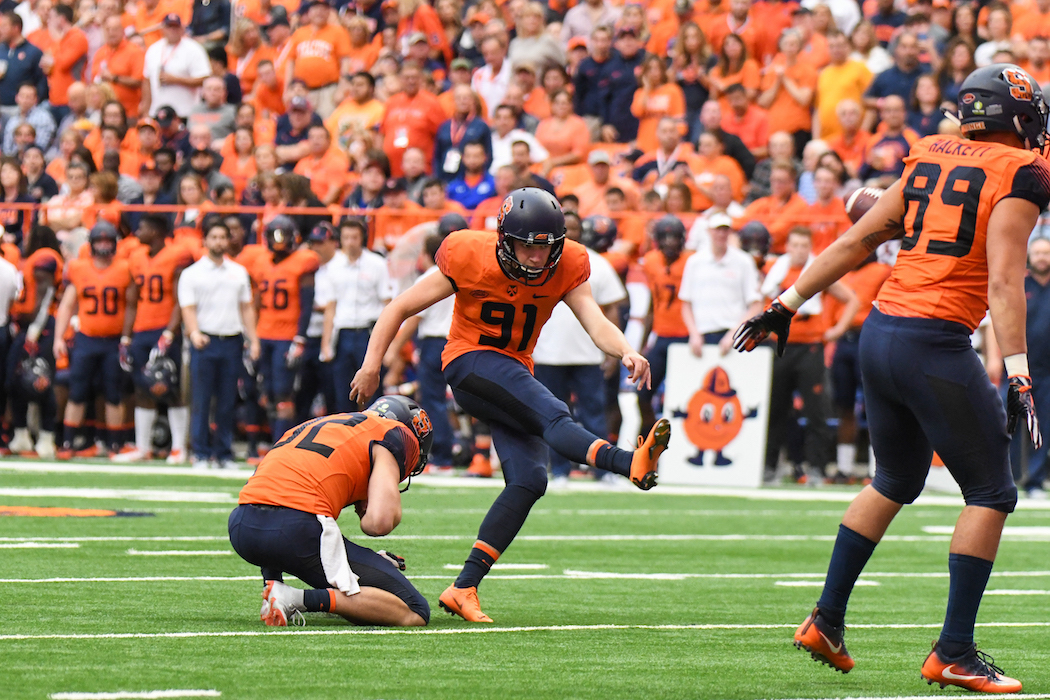 John Biskup, who kicked from 1989 to 1992, graduated as Syracuse’s all-time leader in field goals, PATs made and total points scored — topping Floyd Little, Jim Brown and Ernie Davis. Biskup remembers Dave Jacobs, who previously held the field goals record, being happy for him when he took the crown. He’s never met Szmyt, but he wants to reciprocate that feeling with him.

In the late 1990s, Trout finished fourth-most with 49 career field goals. Trout keeps a group chat going with several former kickers and punters from around his era. They talk about life, Syracuse football and Szmyt, who passed him this year.

“He’s playing in some tough conditions, and he’s just so damn consistent, which is the coolest thing,” Trout said. “He’s as consistent as any kicker, honestly, in the country — and the history of the country.”

Szmyt first met Gary Zauner when he was a freshman in the fall of 2017. Lala found Zauner, a professional kicking coach, on the internet and gave him a call.

“I know you’re telling me you can do a 50-yarder, it’s easy for you, so I’m going to take you to a professional coach and I want to know his opinion,” his mother said.

Zauner was amazed at Szmyt’s “unbelievable ability and technique,” and told him to keep doing what he was doing, Lala said.

Szmyt’s trained with Zauner ever since, taking private lessons each summer and talking through technique over the phone. Zauner, who’s trained college and NFL kickers and punters for 40 years, teaches kickers a natural style and often works with former soccer players. He’s taught Szmyt the same way he trained Anderson, whom he coached for five years with the Minnesota Vikings. Like Anderson, Szmyt was a natural, Zauner said.

Szmyt’s always carried himself with a calm, laid-back attitude. He doesn’t get too high or too low based on results, something Zauner praised. He wasn’t even aware he was in reach of the all-time SU record until recently, his dad said.

About a year after starting with Zauner, Szmyt competed for SU’s starting job in fall camp. His family couldn’t afford to pay Syracuse tuition for four years, so he’d transfer if he didn’t get it. Choosing Syracuse without a scholarship guarantee was a “leap of faith” for the Szmyts, Boller said.

Zauner said he thinks Szmyt missed only one field goal all training camp. He won the job, and a scholarship came soon after. Against Pittsburgh in Week 6, Szmyt nailed a 54-yarder in Heinz Field — a notoriously tough venue for kickers — to give SU a late 37-34 lead. Babers pumped his fist and jumped up and down on the sideline.

When the kick came up during a film review session days later, Babers asked Szmyt to stand up in front of the team. He announced Szmyt’s scholarship on the spot. Szmyt remembers being so excited that he struggled to pay attention to the rest of the game film after that.

“I can still remember a couple coaches when I said, ‘Hey, Andre’s earned a scholarship, I’m going to give him a scholarship.’ And they were like, ‘Woah, we can wait and do that at the end of the semester.’” Babers said. “I said, ‘No, the way this guy’s kicking, he’s going to win some kind of award, and I’m not going to be the head coach standing next to him and the guy doesn’t have a scholarship. He’s good enough, we’re giving him a scholarship right now.’”

Babers’ prediction came to fruition at the end of that 2018 season when Szmyt became the first Lou Groza Award winner in Syracuse history. He went 30-for-34, one make away from the all-time single-season NCAA record. 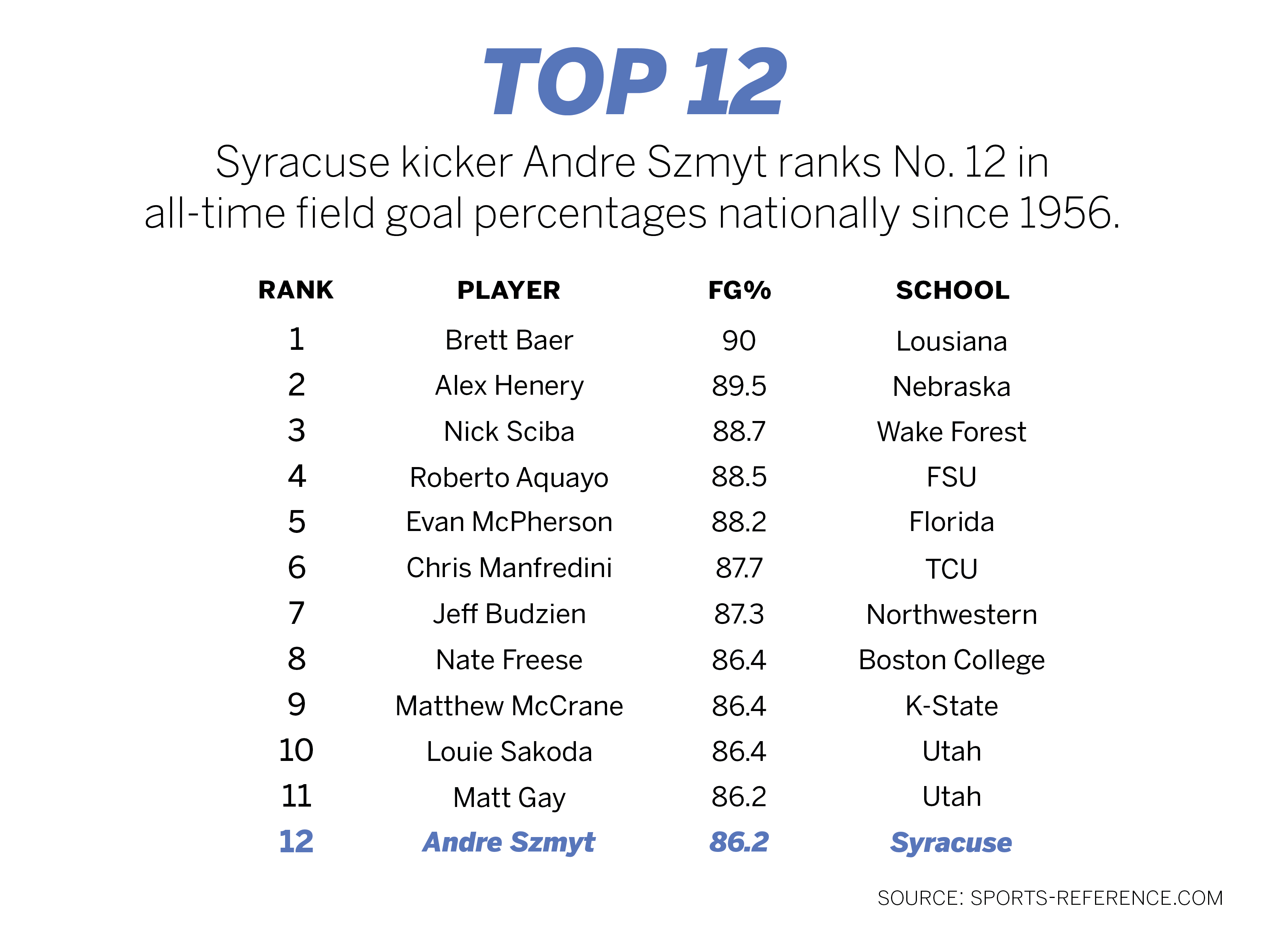 Boller, who recruited Szmyt to Syracuse, said he’s “for sure” a “draftable” player whenever he decides to leave SU. Most NFL kickers take kickoffs, something Szmyt hasn’t done at Syracuse, but Boller’s worked in and around the league since 1995 and cited the reduced kickoff length as a reason Szmyt shouldn’t worry about that.

Szmyt still has two years of eligibility, but Syracuse’s all-time record may be the only major milestone between now and the NFL.

“Andre’s the complete package,” Boller said. “The good thing about him, nothing phases him…I don’t think he lets a bad kick bother him. That’s what pros do.”