Mark Burnam used the same type of stick in five different World Lacrosse Championship games for the Iroquois Nationals. It was a handmade, 6-foot wooden long-pole stick, with the same hickory wood used to make sticks for the rest of the team.

The sticks, heavy by nature, were opposed by many of the Nationals’ opponents who referred to the sticks as “weapons,” Burnam said.. Burnam remembered once breaking the collarbone of an Australian attack while running to pick up a ground ball.

But the Iroquois Nationals didn’t use the wooden sticks to threaten their opponents. They used them out of pride for their Indigenous background, even if the sticks were harder to use than newer, plastic versions.

“We’re Iroquois Nationals — we have a stick-maker on our reservation — we’re kind of proud to use them,” Burnam said. “That stick’s medicine for us.”

The stick-maker, Alf Jacques, has been making wooden sticks on the Onondaga Nation Reservation since he was 11 years old. As lacrosse’s rules have evolved and wooden sticks have been discarded in favor of plastic ones, Jacques has preserved the traditional manufacturing process in order to maintain the Indigenous lacrosse culture on the reservation.

“We had to keep the tradition (and) the culture going by making sticks for our people. You can’t play a real medicine game without a wooden stick,” Jacques said.

When he was younger, Jacques couldn’t afford a stick when he played on the Onondaga Nation. He constantly borrowed sticks from his neighbor, his brother or his dad but always had to return them.

So one day, Jacques’ father, Louis — a stick-maker himself — took him to the woods to cut down a hickory tree and begin the lengthy stick-making process. The sticks were unappealing at first, but Jacques could play with them, he said.

Initially the duo began making sticks inside their house, carving wood and netting sticks inside their living room and kitchen, before transitioning to a small shed. In 1968, Louis took out a loan to create a building devoted to full-time stick-making where Jacques still works today. Initially, the two made up to 12,000 sticks a year, Jacques said.

“He’s well respected,” Burnam said of Jacques. “He sells out his sticks before he even got them made.” 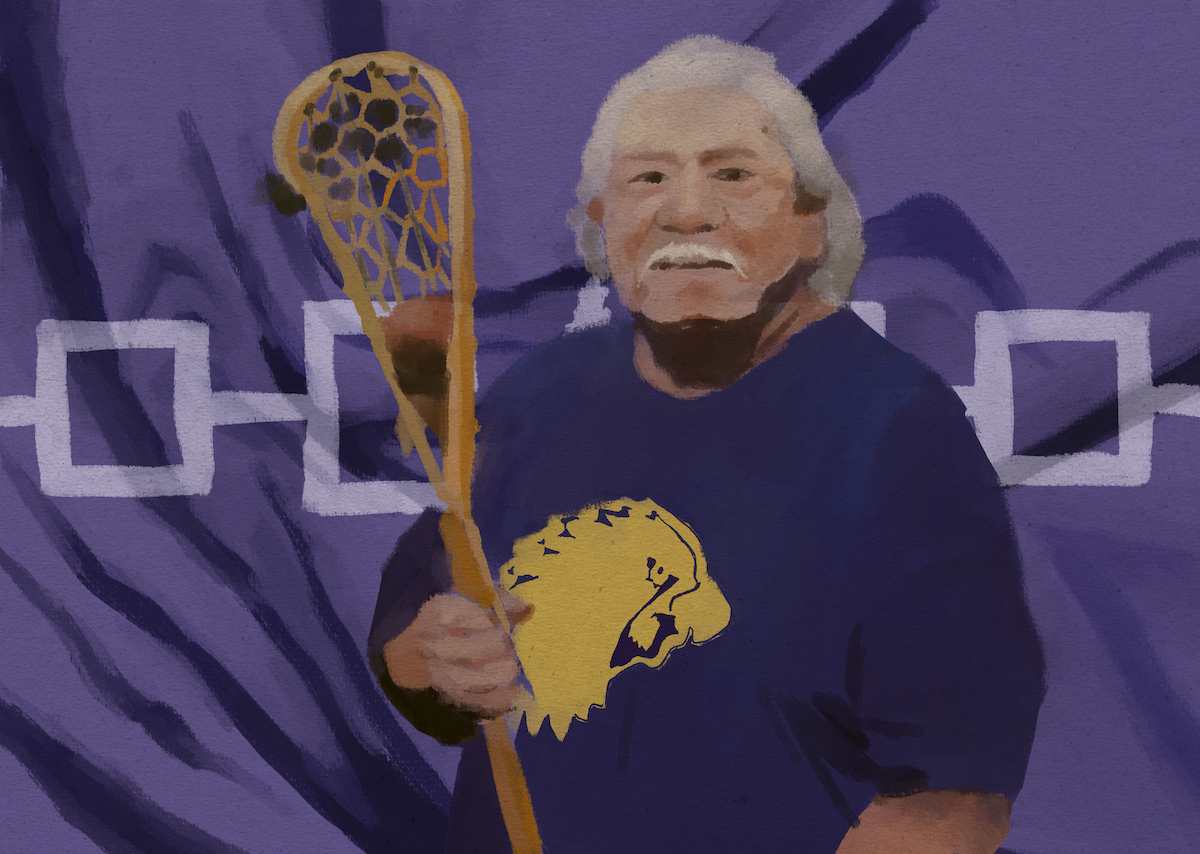 Alf Jacques has been making sticks on the Onondaga Reservation since he was 11 years old. Yiwei He | Illustration Editor

Making the perfect stick begins with Jacques searching for the right hickory tree — either smoothbark or shagbark with no knots, limbs or twists. He cuts the tree down and brings it back to the shed and splits it lengthwise with a ledges axe. Then, Jacques hand-carves and dries it for nearly two months, since “fresh, wet wood” won’t bend, he said. The wood is steamed for 20 to 40 minutes inside an oil tank set above a scrapwood fire before Jacques finally bends it into the shape of a lacrosse stick.

A wire holds the stick in place before it’s stored to dry for at least six months. Then, it goes back in the steamer and is removed before being bent into the shape of the lacrosse head. Jacques removes the wire and carves the stick into the proper shape with a two-handed draw shave to make it more workable. He then drills the holes for the netting, which Jacques does without any measurements, before sanding the stick, and adding his name, the date of completion and shellac to the stick. The stick is dried again before the leather nylon and netting are added to complete the stick.

Jacques estimated that he usually makes about 20 sticks at once, though one day he remembered making around 400. But back in 1974, when plastic sticks “took over,” 12,000 sticks a year turned into around 1,200, Jacques said. He and his father still made sticks on a smaller scale, mainly to preserve one of the reservation’s most important traditions. Boys born on the reservation receive a wooden stick — not a plastic one — when they are born, and are buried with one, too, Jacques said.

Burnam has known Jacques since he played at Syracuse in the early 1980s. When Burnam played for the Orange, almost every player used sticks made by either Jacques or Eli Cornelius, another Onondaga stick-maker.

Syracuse head coach Gary Gait used one of Jacques’ sticks in 1991 — his first season of professional box lacrosse after graduating from Syracuse. Gait remembered breaking around seven of his sticks but said he enjoyed using them because they were light.

Jacques continued making wooden sticks for box lacrosse players, who preferred them over plastic ones. Since field lacrosse requires a wider, longer stick, Jacques said it was harder to make a wooden stick that was more usable than a plastic one because of the weight difference.

“When people saw you using it, I think they respected the game a lot more, because not everyone can use them; they’re hard to use,” Burnam said.

“People used to move their stick out of the way real fast when a wooden stick was around,” Burnam said.

To Burnam, Jacques’ sticks offered the perfect balance of a challenge while also maintaining Indigenous culture on the field. Burnam still has all five of his World Championship sticks, and doesn’t plan to give them up.