Alan Griffin had already established his outside shot, and Rider was keying in on it. Four hits in the first five minutes of a game tends to do that.

So, he adjusted. When a Rider defender closed into him too hard with 11:25 left in the first half of a game already out of hand, Griffin pump-faked. The Bronc went flying toward halfcourt, and Griffin took two dribbles into the paint, drawing help. He found Joseph Girard III open on the right wing for a 3.

It was the type of play he hasn’t had the chance to make in his college career, and it captures why he came to Syracuse: To prove he can be more than just a catch-and-shoot player.

“He can shoot the ball,” head coach Jim Boeheim said. “I was really more proud of him for making the play to set Joe up for the 3. It was a really good play.”

In Saturday’s 87-52 defeat of Rider (0-1), Griffin displayed playmaking ability not seen in his first two games in the Carrier Dome. He scored off the dribble and the catch and found teammates for buckets while chipping in defensively. His five assists are a career-high, and his 23 points are just two shy of his personal best. He shot 8-for-11 overall and 4-for-6 from 3, part of a team record-tying 3-point barrage from the Orange.

“Coaches trust me, my teammates trust me and I trust the process,” Griffin said. “Everybody here made me start to believe in myself.”

At Illinois last year, Griffin was among the most efficient scorers in college basketball, finishing first in offensive rating among players with at least a 20% usage rate. But 63.4% of all his shots came from behind the arc. As the Illini’s fourth or fifth option, he was a floor-spacer. And he wanted more.

At SU, he’s trained with assistant coach Gerry McNamara to improve his off-the-dribble playmaking. Hours before Saturday’s tipoff, Griffin and McNamara were on the court working on pull-up jumpers. Boeheim said his playmaking was a “work in progress” after Griffin went 3-for-13 in a blowout win over Niagara. 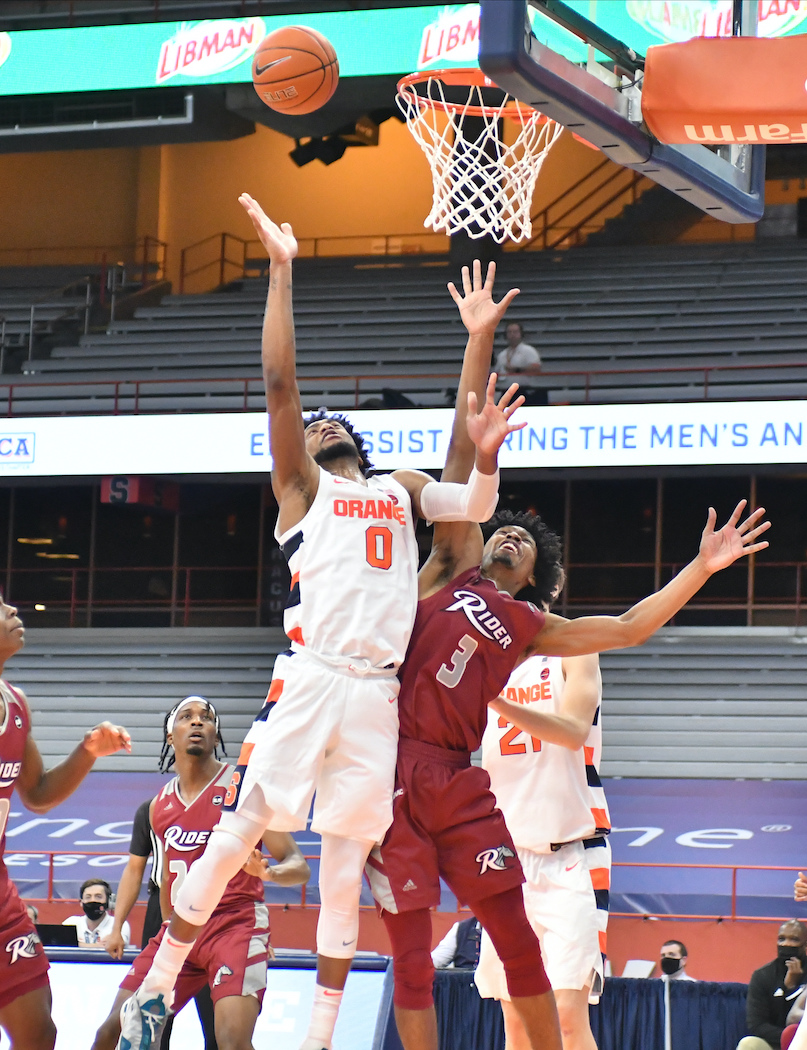 After shooting 3-for-13 against Niagara, Griffin rebounded and shot 8-for-11 overall. Courtesy of Mark Konezny | USA TODAY

But as soon as the ball tipped Saturday, Griffin was blazing. All four of the junior’s 3-pointers came less than five and a half minutes into the game. A catch-and-shoot 3 from a Quincy Guerrier pass at the free throw line. Two triples off the catch in transition. A pull-up from above the break at the top of Rider’s 2-3 zone.

“Alan wasn’t really happy with himself after the last game we had,” Girard said. “He’s a hard worker as well. I know he can come out here, be confident, and nothing was going to change for him. He came out firing, and pretty much every one of them hit the bottom of the net.”

Rider keyed on Griffin’s outside stroke, opening up options such as the drive-and-dish to Girard (21 points). The Broncs quickly went to man defense because of Griffin and Girard’s shot-making. When a Rider defender cut Griffin off two dribbles into his drive, he turned over his right shoulder and lifted for a 17-foot fadeaway that swished through. 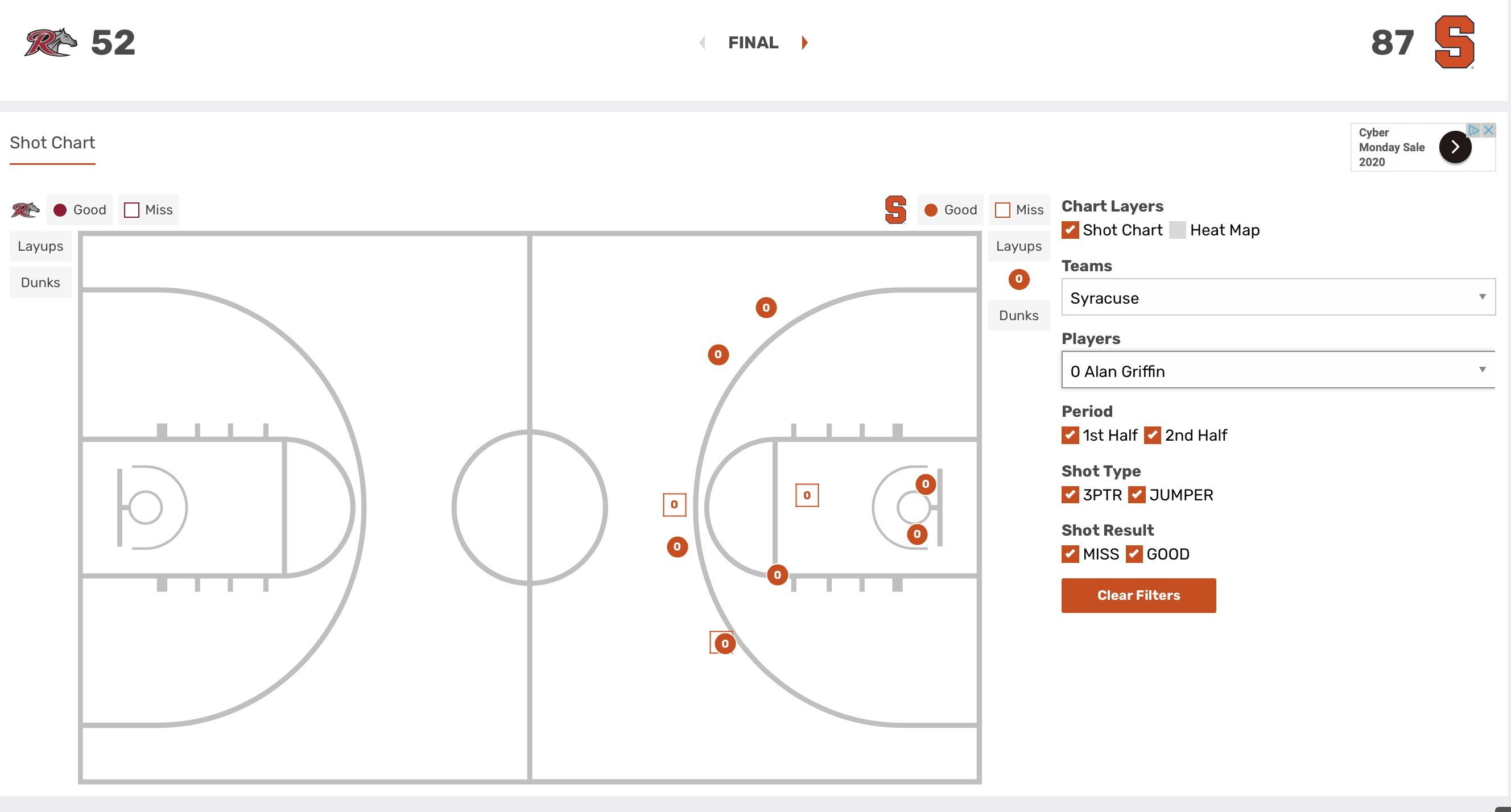 “He never really had the opportunity to do that at Illinois,” Boeheim said. “He was pretty much a standstill shooter, but he put the ball on the floor and got to the basket a couple times. That’s all good progress.”

Griffin also made plays off-the-ball, taking advantage of his defender falling asleep when he cut baseline for an and-1 reverse layup to start the second half.

His passing was strong, too. He found a streaking Marek Dolezaj with a 70-foot chest pass for an easy layup. What would’ve been a sixth assist was fumbled underneath the rim by backup center John Bol Ajak late in the first half. Two of his career-best five assists generated 3-pointers. He also notched four rebounds and two steals.

“Before the game, my teammates, coaches, everybody, the whole staff, we all got each other going,” Griffin said. “When you get that confidence before the game, or even just seeing that first one go in as a shooter, like I said, it can get you going.”

The team had a funny way of giving Griffin confidence in warmups. Shortly before the national anthem, Syracuse cleared the paint. Every player lined up on the edge, forming a runway. Griffin, coming from outside the arc, looped a ball high into the air so it would bounce back up to him for a self alley-oop. He soared, meeting the ball above the rim with his right hand, but his slam missed off the back rim.

He didn’t miss too many after that.