Just three minutes into Mikey Berkman’s Syracuse career on Feb. 14, 2020, he fell to the turf. He would later be diagnosed with a torn ACL, missing the next 13 months after redshirting the previous season.

What was supposed to be a year-long transition period into Syracuse’s lineup was quickly prolonged. And after the pandemic hit, several experienced players returned to SU, extending Berkman’s wait to return to the field. Berkman appeared in just two games in 2021 and was forced to train a lot on his own, where he prioritized physical fitness more than ever before.

But this year, after a near three-year wait, Berkman has become a mainstay in Syracuse’s (2-3, 0-1 Atlantic Coast) attack unit following Owen Hiltz’s injury. The redshirt sophomore has recorded points in four of five games, averaging 2.6 per game, while leading all starters with a 47.1% shot percentage.

Berkman’s lacrosse career almost never began, though. He was less than a year old when he came back from routine blood work with severe bleeding in his arms. Soon after, he was diagnosed with Hemophilia A, the most severe version of the bleeding disorder.

“Dealing with hard stuff like that kind of puts other things into perspective of how lucky I am to be playing lacrosse,” Berkman said.

Before he took up the sport at 10 years old, Berkman underwent numerous surgeries to install ports — a device that goes under the skin to infuse medication. At 8, Berkman began proactively treating his hemophilia through prophylaxis, which regulated his blood clotting levels once he began playing and prevented any serious injuries, which is why he never experienced any serious injuries once he started playing lacrosse, his father, Mike Berkman, said.

Through that process, Berkman began learning how to self-infuse his own medication, something he still has to do today.

“At the youngest age there wasn’t a lot of contact, so we just kind of took it year by year to see how he did,” Mike said.

Berkman became accustomed to “absorbing contact” through playing in Mike’s pickup box lacrosse league in Orlando, Florida. Mike said it was where his son developed good footwork and balance early on, and it was also where Berkman first began training with Syracuse alumnus and four-time all-American, Casey Powell. 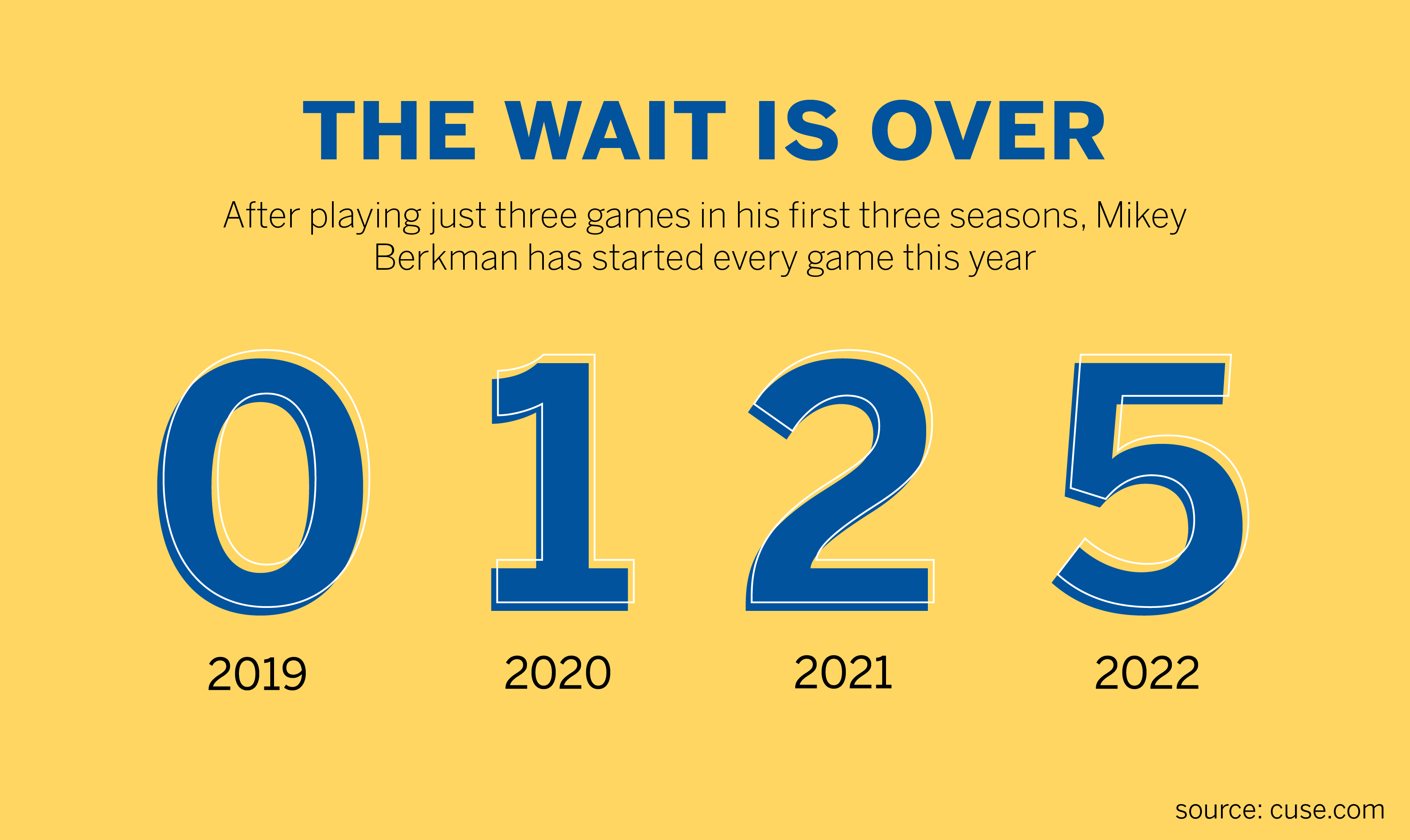 The connections with former SU players allowed Berkman to be seen by then-assistant coach, Kevin Donahue, when he was just in eighth grade, and Berkman ultimately committed a year later.

“He definitely wanted to go to Syracuse, and he made that known,” Powell said. “At the time, that wasn’t really happening in Florida. There were a few players going to some good spots, but it wasn’t likely that he’d have that opportunity.”

“He could’ve had a lot more goals, probably could’ve had the goal record if he wanted to,” West Orange head coach Bill Baker said. “Where somebody might just try to dodge through two or three guys, he’s in there making the right pass, making the right looks and always trying to elevate a broader scope of his game.” 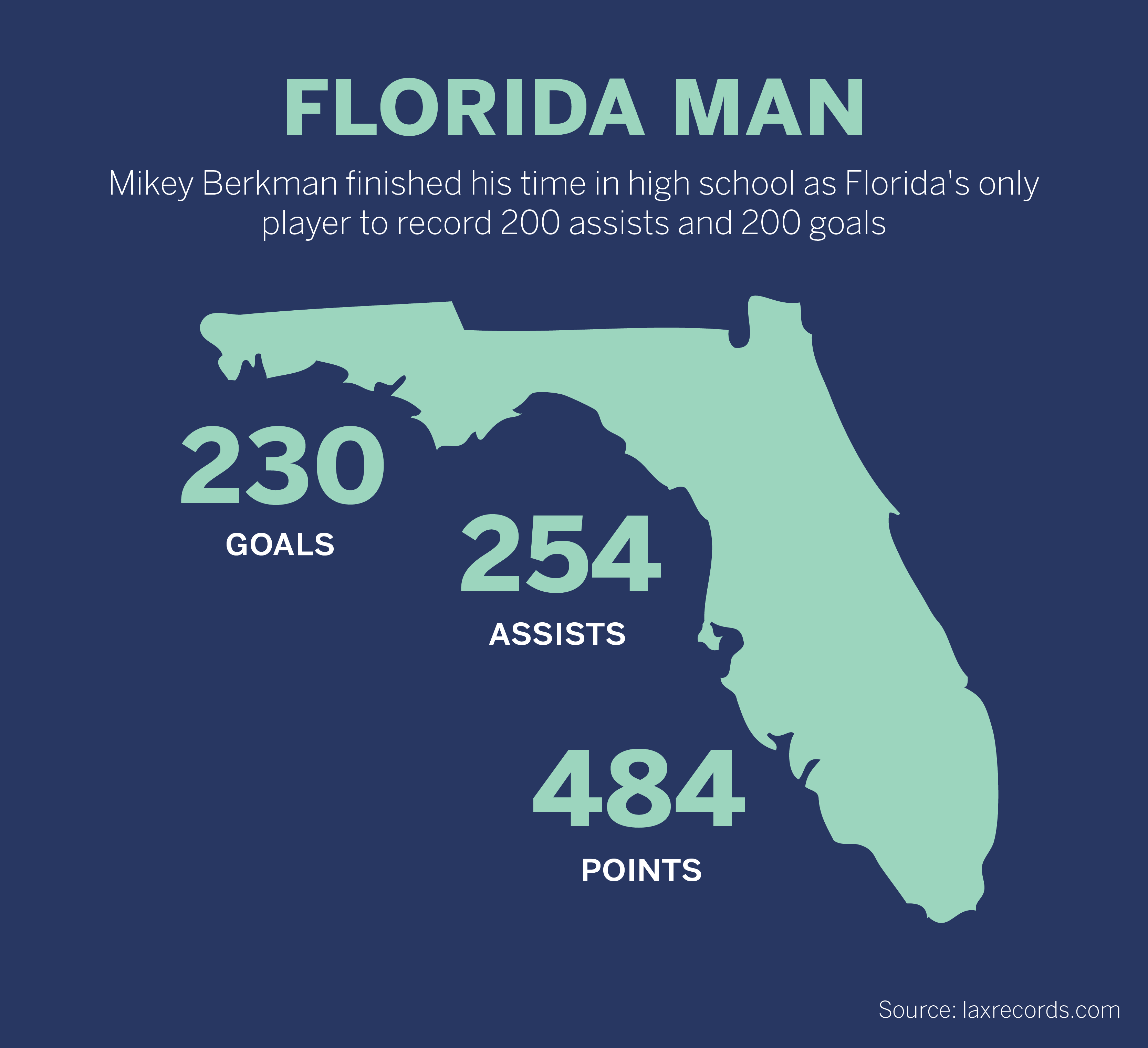 But when Berkman arrived at Syracuse, the transition into his first season didn’t come as easily as he originally hoped, Mike said. Even though Berkman was a standout in Florida, Mike said joining a team of the best players from “hotbed” states — like Maryland and New York — was a different lacrosse environment for him.

Then, as injuries and the pandemic limited Berkman’s game action, he took to a more individualized training regimen, continuously training with Powell and John Davis back in Florida.

Berkman used Powell’s perspective on lacrosse to inspire his own, especially when his career hit its lowest points. Powell taught him to understand lacrosse from its Native American roots and that it’s a “medicine game.”

“(Berkman) was just always big on the Native American roots of lacrosse and it being a spiritual game,” Mike said. “It kind of brought him joy when there was a time when he wasn’t sure if he could play sports.”

So far in 2022, Berkman has embraced his role as a full-time starter. In Syracuse’s opener against Holy Cross, Berkman assisted the Orange’s first goal of the season less than three minutes into the game. Six minutes later, he found the back of the net on his own, scoring from the left wing on a behind the net assist from Pete Fiorini, which set up his eventual first-half hat trick.

The post After near 3-year wait, Mikey Berkman is a mainstay in Syracuse’s attack appeared first on The Daily Orange.