When Emma Griffin, Jones’ mother, first put him into pee-wee football when he was 4 years old, he was bigger than most of the kids. But during games and practices, Jones didn’t want to hit anybody.

Griffin said she wanted to keep Jones in football, so she put him with kids two years older than he was the following season. Jones didn’t get accustomed to the contact until he was 14, his mom said, but he realized one skill he had compared to the other older kids. He could call the plays.

At home, Jones “calls the shots” to make sure his niece and older sister are the most comfortable they can be, Griffin said. On the field, Jones has led his Pop Warner teams, three high school defenses and now Syracuse’s 3-3-5 defense. After his promotion from backup to starting linebacker last season, Syracuse head coach Dino Babers said Jones is the “quarterback” for SU, and he leads the team in solo, assisted and total tackles.

Jones began his football journey at defensive end instead of linebacker. Griffin said Jones only realized right before high school that he “had the strength to knock people down.” Once he got into high school, Jones received an offer from Clemson after his freshman season, when he starred on Champagnat Catholic School’s varsity team.

But Jones made another switch after his freshman year. He transferred to Mater Academy (Florida), where he played under head coach Jeff Pond. Pond had a defensive scheme that he learned from West Virginia University’s 2011 team — the 3-3-5.

Three years after his time at Mater, Jones would play under Babers’ 3-3-5, where he is now a hybrid of a defensive end and linebacker, coming up to the line on a large number of defensive snaps. Pond said Jones has the build of an “undersized” defensive lineman, making him a threat in pass rushing and coverage with the 3-3-5.

“We put him in the position where he was pretty much playing a defensive line position standing up,” Pond said. “He was the perfect size for a linebacker.”

But Jones was in search of tougher competition, something he found at nearby IMG Academy (Florida). So he made another change back to defensive end and transferred to IMG. Jones said the move was the “best” for him, as he was able to go against some of the best offensive players in the country every day.

“Iron sharpens iron every single day of practice,” Pond said. “He was a first-time linebacker when I had him, and IMG polished him up to help him become the finished product he was in his senior year.” 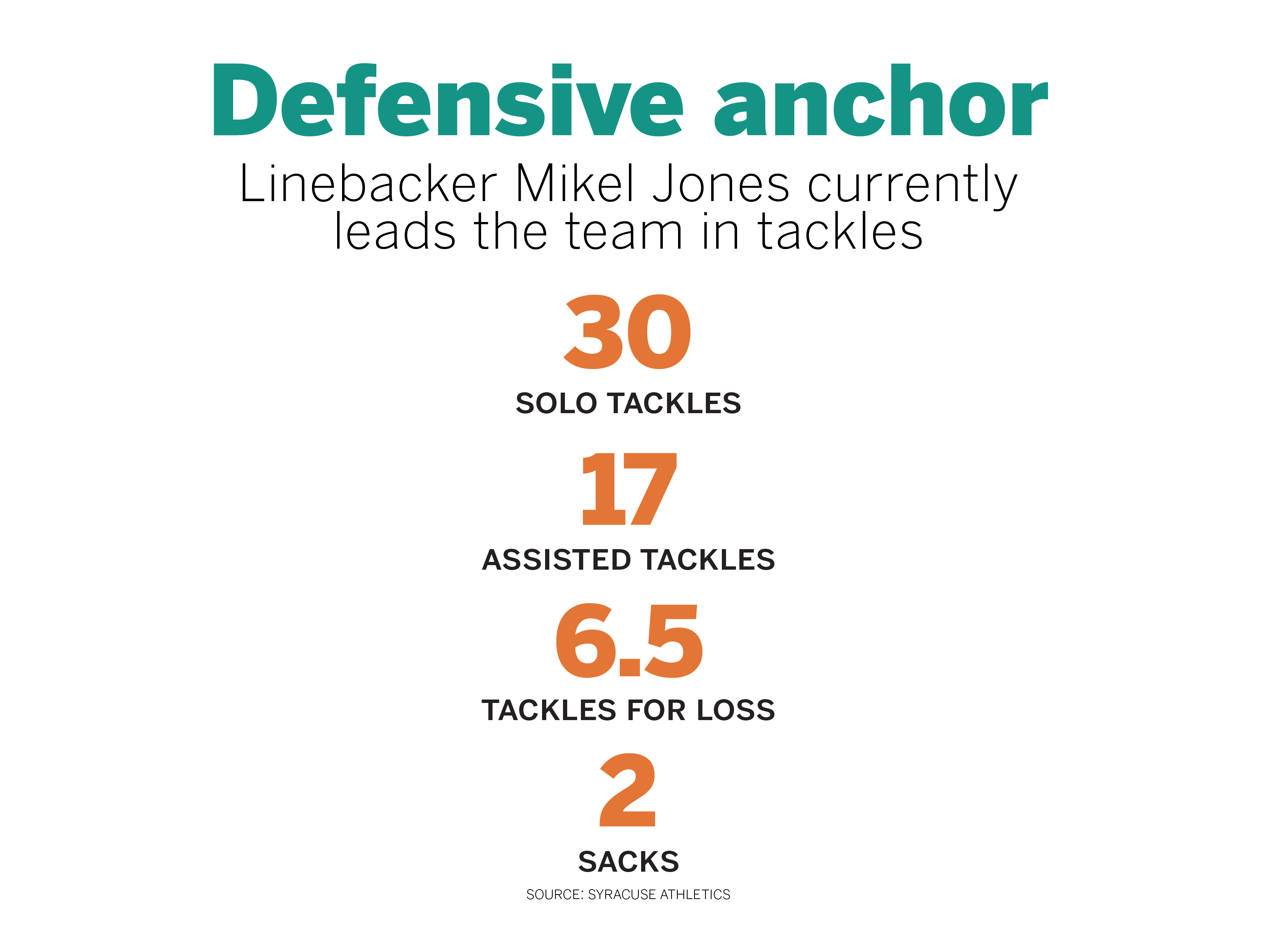 At practices, Jones would run one-on-one pass rushing drills against offensive linemen while also getting coverage reps against top-tier running backs, including future Alabama running back Trey Sanders — a player “not common at your local high school,” Pond said.

In Jones’ senior season, IMG Academy was ranked the best school in the country, and the team traveled out of Florida to play some of the nation’s best teams. Against Mater Dei High School in Los Angeles, California, Jones went against quarterback Bryce Young, who now starts for Alabama. There, Jones dominated the middle of the field despite a 28-24 loss.

By the end of his senior year, Jones had become one of the top 25 linebackers in the country despite only learning the position less than two years prior. After receiving several DI offers, Jones chose Syracuse, which was coming off a 10-3 record in 2018.

Jones said the competition at IMG Academy prepared him for his freshman season at Syracuse. As a true freshman, Jones made four starts, leading all first-year players with 38 tackles.

The 4-3 system that Babers employed at the time was different from the 3-3-5, and it required Jones to spend less time at the line — making him work as a typical linebacker. Before the 2020 season, however, defensive coordinator Tony White introduced the 3-3-5 system that Jones was already familiar with.

He’s the key to everything. He’s the guy

But during spring practices, Jones had to wait on the sidelines for one of the first times in his life, unable to use the skills he had already displayed in the 3-3-5 while in high school. Instead, he was Geoff Cantin-Arku’s middle linebacker backup.

“I knew the new coaches weren’t just going to go off of last year. They wanted to see what I could actually do on the field,” Jones said.

After just four spring practices, COVID-19 sent the entire team home. Jones said he wanted to use the time to get bigger so that he could fight for the starting position once the team was allowed to practice again.

Jones said he reached his target weight of 230 pounds by the end of the summer — he had built strength using old weight plates at home in Florida.

In 2020, Jones solidified a starting role and led the team with 69 tackles. His success on the field came from his ability to process things faster due to his experience at defensive end, Pond said. That year was the first where he became the “quarterback” of the defense, according to Tommy DeVito. But the team only won once, and Jones’ success was overshadowed by the team’s 1-10 record.

Heading into this season, Jones said the team was better prepared with an entire offseason to implement more strategies to the 3-3-5. Syracuse added twists and more blitzes to its playbook, looking to utilize the strength it had at the linebacker position with Jones, Marlowe Wax and Stefon Thompson.

Now, the Orange are off to a 3-2 start, the best start they’ve had since Jones joined the team. From the middle of the field, Jones has become one of the top linebackers in the ACC, and ranks third in the conference in tackles, averaging 9.4 per game.

But Jones was already used to playing against talented quarterbacks from his childhood in Florida. He had stopped a now-Heisman Trophy frontrunner in Young in high school, and Jones wanted to do the same against Willis.

We put him in the position where he was pretty much playing a defensive line position standing up. He was the perfect size for a linebacker.

With eight armbands — six more than he had as a freshman — tightly wrapped, Jones played a “QB spy” role against Willis. His sole purpose in this role was to stop the quarterback’s dual-threat abilities.

“I was watching a lot of film knowing that I was going to get the opportunity to stop (Liberty),” Jones said. “A lot of people are looking at (Willis) right now, and I took pride in watching the film and seeing his tendencies.”

In the first quarter, Willis gave the Orange trouble by breaking away from a collapsed pocket. But the Orange continued to send as many players as possible toward Willis, knowing if they stopped the NFL prospect, they would have a good chance to win the game.

SU brought four players up to the line at the beginning of the second quarter, including one linebacker. But Jones stayed at home in the second level, ready for Willis if he tried to run.

After dropping back on third-and-3, the pocket completely broke down on Willis. He saw an opening down the left side of the field, but Jones expected him to make this move. The captain of the defense wrapped up the Heisman candidate’s legs, one yard short of the first down marker.

“He’s the key to everything,” Babers said of Jones. “He’s the guy.”

The post After moving around his entire career, Mikel Jones has settled at SU appeared first on The Daily Orange.