Chris Fox was given five years to make the Orange a powerhouse. The timeline came from then-athletic director Daryl Gross, who was interviewing Fox for the position of head coach of one of the worst men’s cross country teams in the Big East.

Fox looked at the budget and the amount of scholarships and responded, “OK, that’s reasonable.”

By the time Gross’ tenure concluded in 2010, the Orange men’s team had won their second-straight Big East title. Five years after that, Syracuse was a national champion for the first time since 1951.

Fox built Syracuse cross country from the ground up and transformed it into one of the best programs in collegiate sports. It started with recruiting gems such as Philo Germano and Justyn Knight, continued through grueling practice runs on Sweet Road and ended with a lot of hardware. After Knight, the head coach’s most prized recruit, took home the program’s lone individual NCAA cross country title in 2017, Fox abruptly left the program to help lead a new professional track club with Knight. Brien Bell, his assistant, took over at the helm.

Syracuse is still in the top-tier of the Atlantic Coast Conference for both the men’s and women’s teams, but its performances at title meets have steadily declined since Fox’s departure. Near the five-year anniversary of the Orange’s NCAA title, Fox told The Daily Orange he doesn’t regret leaving Syracuse, describing the chance to coach professionally as “a once in a lifetime opportunity.”

“What Coach Fox did is a legacy that will last forever,” former SU runner Jamie Navarro said. “He doesn’t talk a lot, not in front of the camera kind of guy, (but) his humility and the amount of effort he put in for his school adds to the legend he was.”

In the summer of 2018, Fox announced he would retire from collegiate coaching to join Knight in establishing the Reebok Boston Track Club. Along with Knight and assistant coach Adam Smith, Fox recruited some of the top runners he coached at Syracuse, including Germano, Martin Hehir and Colin Bennie, to join him with the club based in Charlottesville, Virginia. 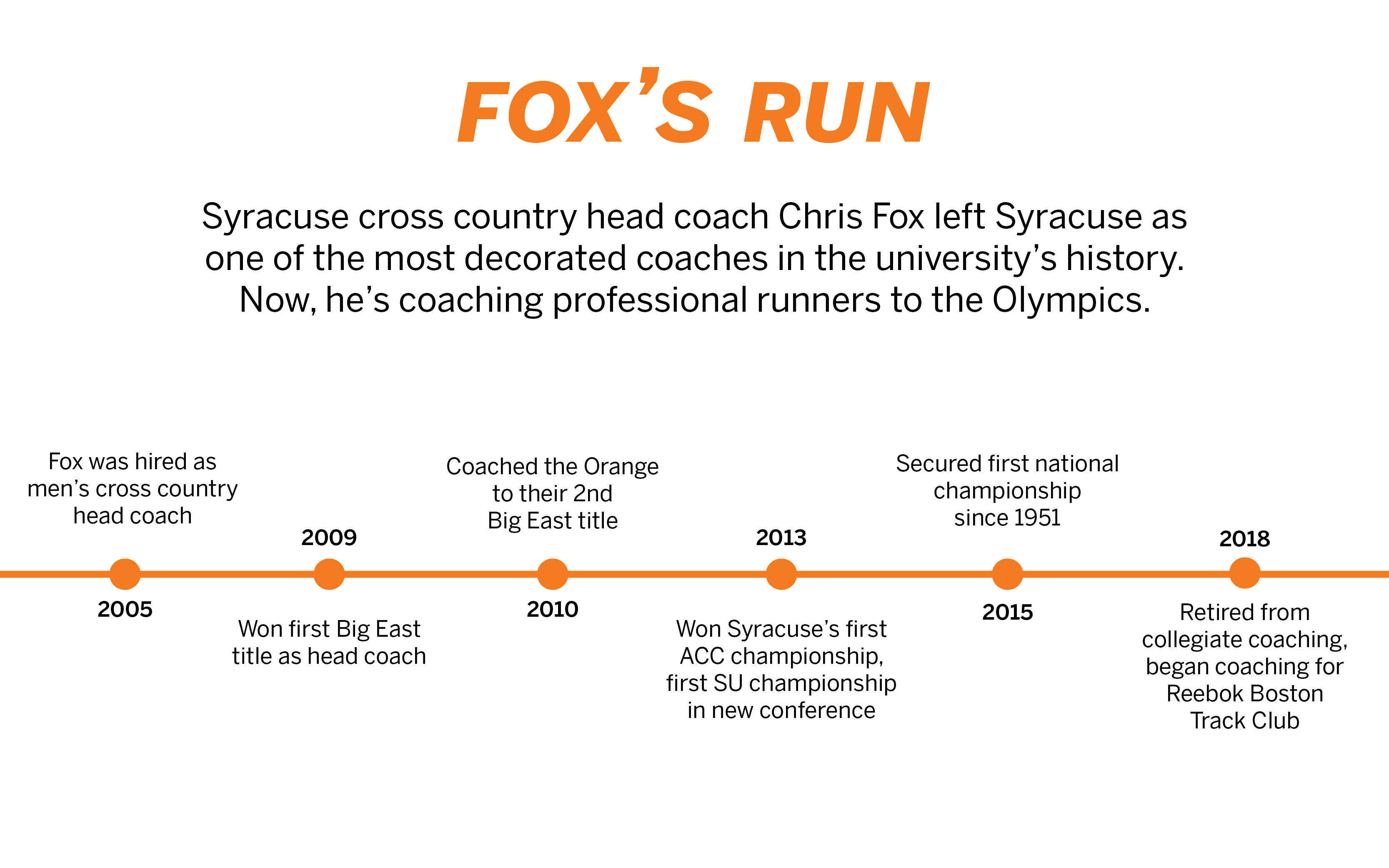 As a result of Fox’s sudden departure, Syracuse had to quickly search for a replacement to its most accomplished running coach. The decision to put Bell in charge of the program was a result of his role in recruiting key runners on the 2015 national title team, Fox said.

“Coach Bell was with me every day from when I started working at Syracuse,” Fox said. “He certainly earned that opportunity… He’s a tireless worker and a great recruiter.”

For 13 years, Fox and Bell were two constants in SU’s program. The two men were both there when Syracuse won its first national cross country title since 1951, a victory that Fox still calls “a personal highlight.”

There were five key runners on that 2015 team, but two of them stand out the most to Fox now. Hehir was the “Pearl Washington” of the program because of his leadership abilities and the point guard role he fulfilled, Fox said. Knight was the star and the “Carmelo Anthony” of the team. 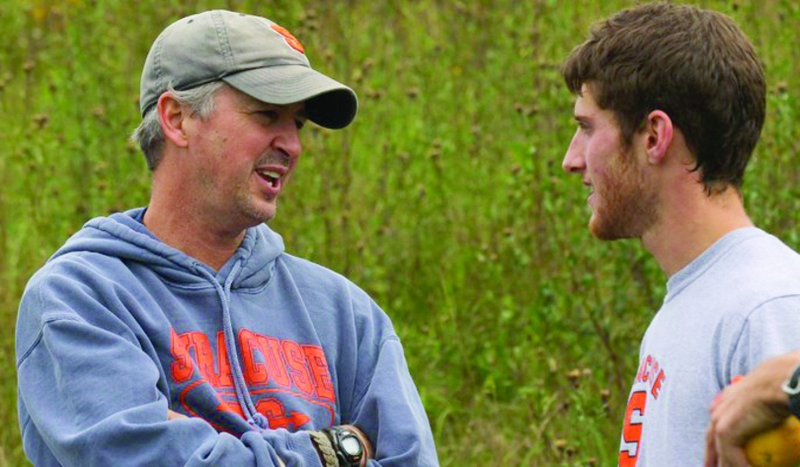 Gaining that reputation took time. During Fox’s first year at the helm, Syracuse placed 10th out of 14 teams in the Big East. Signing Hehir was the key to getting Bennie, and both were instrumental in leading Canadian runner Knight to central New York, Fox said. All three continue to run under Fox today.

“I think we all get each other, and they’re special because they’re from ‘Cuse,” Fox said. “We think ‘Cuse people are a little more tougher, a little more understanding of how to be great.”

With Hehir, Bennie and Knight came newfound success for the program. There were the five straight ACC titles between 2013 and 2017, the men’s national championship in 2015 and the individual national title for Knight in 2017. Fox was also named ACC Men’s Coach of the Year for three straight seasons, from 2013-2015.

I think we all get each other and they’re special because they’re from ‘Cuse. We think ‘Cuse people are a little more tougher, a little more understanding of how to be great.

The decision to leave Syracuse was a difficult one, Fox said. He told Gross he could turn Syracuse into a top national program 13 years prior, and he had done just that. He still believes it remains an “elite program,” though Bell’s successes haven’t reached the same heights.

Since Fox’s departure after the 2017 cross country season, the men’s team has failed to crack the top 25 in both national championship meets they’ve competed in since. The team recently placed 6th in this year’s ACC Championships.

Although he hasn’t coached at SU in three years, many former SU runners still believe that Fox alone played the largest role in bringing SU cross country to national prominence.

“He was always the fatherly figure for everyone,” Hehir said. “He is a huge part of what made Syracuse great.”

The post After leaving SU in 2018, Chris Fox reflects on the program he built appeared first on The Daily Orange.