Seven other Division-I college football games kicked off Saturday as the clock struck noon, but not in Syracuse. The national anthem had played. The pregame clock counted down to zero. But there were no players out on the field.

Georgia Tech coaches huddled on the field but soon ran off, as three Syracuse personnel needed to be retested for COVID-19. SU was in the tunnel, waiting to come out when the signal was relayed. The Orange walked back into the locker room, waiting longer for their home-opener to start. SU Athletics confirmed all team personnel tested negative Friday, but it retested them out of an “abundance of caution.”

“The first thing that passes my mind is this season right now is just weird,” junior Trill Williams said.

What was supposed to be a celebration of the renovated Carrier Dome ended up being a reminder of the COVID-19 pandemic. The game was delayed until 12:35 p.m., when Georgia Tech kicker Austin Kent booted the ball to Nykeim Johnson. What came next seemed as typical as the previous two weeks: 60 minutes of college football and a strong defensive performance from Syracuse.

There were no fans in the Dome to witness the delayed kickoff or McKinley Williams, Kingsley Jonathan and Josh Black pressuring the Yellow Jackets and forcing four Jeff Sims interceptions. The Syracuse (1-2, 1-2 Atlantic Coast) offense, behind freshman running back Sean Tucker’s two touchdowns and Tommy DeVito’s resurgence, capitalized for the first time in three weeks, toppling Georgia Tech (1-2, 1-1), 37-20.

Almost 40 years ago to the date, over 50,000 fans watched Syracuse defeat Miami University, 36-24, in the Carrier Dome’s first game. There were 50,000 fewer in the seats on Saturday. Four decades in the future, fans may remember this date for marking the first college football game to be delayed and played the same day due to COVID-19 testing results.

“All I know is we were ready to run out of the tunnel, and they told us to go back,” head coach Dino Babers said.

Syracuse’s nightmare began two hours before the game, when All-American safety Andre Cisco collided with Ed Hendrix in warmups, limped off the field toward the tunnel and spent the game on the sideline in sweatpants. After the game, Babers called his injury a “fluke” and was unsure of its severity.

The nightmare continued right up until kickoff, with three Syracuse players or coaches awaiting rapid results for a COVID-19 test.Redshirt players such as freshman Latarie Kinsler Jr. and Florida transfer Chris Bleich sat on the Syracuse bench during the 30 minute delay. The sun shone through the new roof, and an SU logo flashed on the new jumbotron while uncertainty lingered on the field.

Babers gathered his team in the locker room, telling them to stay prepared for any possibility. When the tests returned, he told his team not to run out of the tunnel like they normally do — they had already done it once.

“We waited and waited, and when it was time to go out there, we went out there and performed,” Williams said. 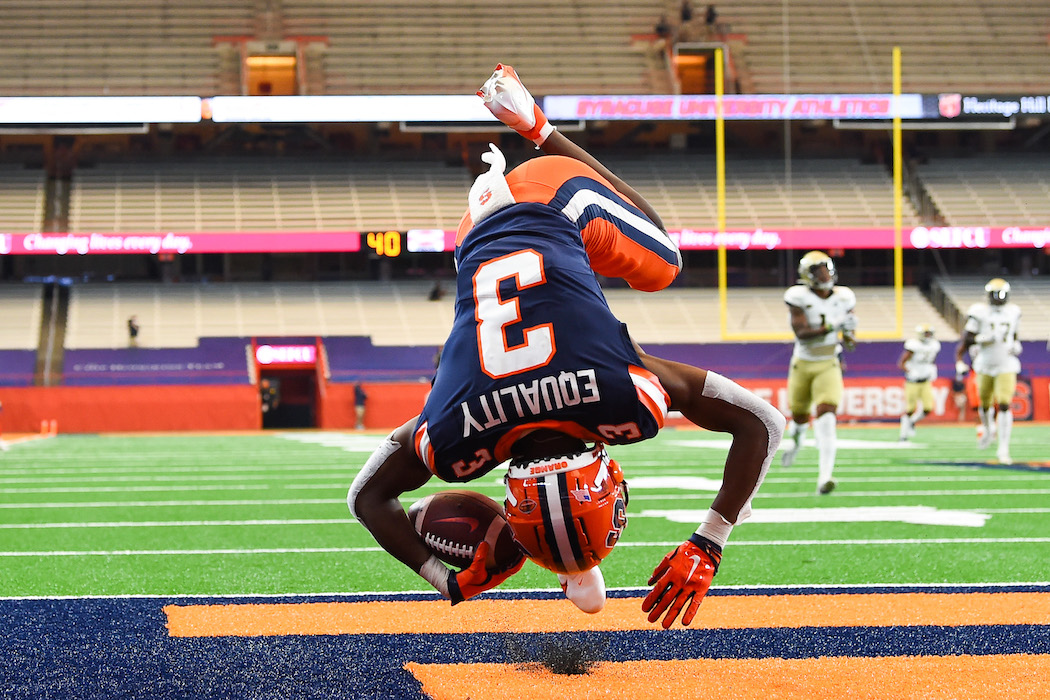 The Orange did as Babers asked, scoring 17 points in the first 15 minutes and forcing two Georgia Tech turnovers. Both came from the defensive line hitting Sims’ arm before he could throw, and the ball popped up into the air. Black hauled in the first, Williams the second.

Later on in the half, house music blasted out of the new Carrier Dome speakers, and the public address announcer screamed “third down” as a noise meter was shown on the screen. But there was no natural noise. The meter kept rising as the artificial sounds got louder, and eventually the Syracuse bench joined in on the chaos.

“I lost my voice because … I think someone with the volume control was showing off,” Babers said. “No one could hear what I’m saying.”

The noise had limited effect, though, as Georgia Tech converted four third downs and a fourth down en route to a 13-point second quarter. A transition from a pass-heavy first quarter to a run-heavy second negated the possibility for interceptions — Georgia Tech only had one completed pass in the quarter.

Missed tackles allowed the Yellow Jackets to break off 125 rushing yards in the second quarter, including four over 10 yards. That continued on the first drive of the third, until SU mustered two stops and forced a third down in its own territory.

During that third down, Cody Roscoe pushed his blocker to the side and ran into the backfield. Freshman Rob Hanna, filling in for Cisco, was kneeling on the turf as Sims’ hurried throw fell into his arms, handing SU another turnover.

“When I was out there and didn’t see (Andre) to my right, it felt strange,” Williams said. “Everybody that stepped up today did a good job.” 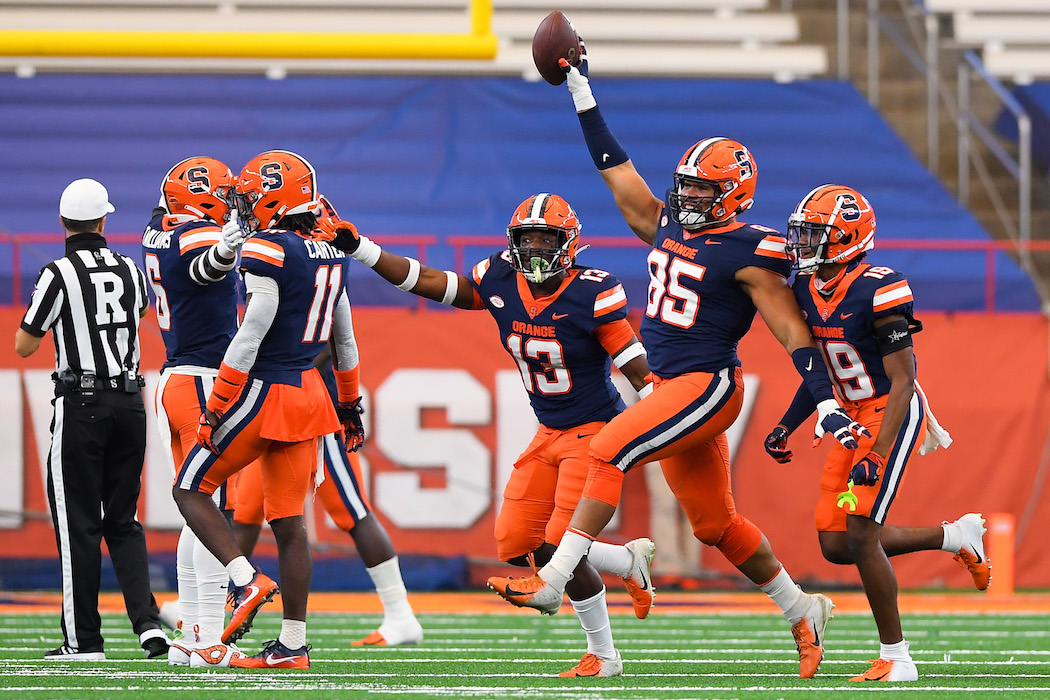 Josh Black (85) had just one tackle for Syracuse against Georgia Tech, but secured an interception that keyed a scoring drive. Courtesy of Rick Barnes | USA TODAY Sports

For the third straight week, Syracuse’s defense created scoring opportunities for the offense. In the previous games, DeVito folded in the red zone, missing throws over the heads of receivers and taking poorly-timed sacks. But he was far more decisive against the Yellow Jackets, completing a season-high in passing yards with 194 — more than his first two games combined — and first two touchdowns of 2020.

Both were on deep balls in the second half, one to Taj Harris and the other to Johnson. The second came right after a Georgia Tech touchdown, part of the visitors’ 20-6 run. DeVito sprinted down the field, pointing to offensive coordinator Sterlin Gilbert as his team celebrated in the end zone.

A few minutes later, Syracuse danced down the sideline at the end of the third quarter to Chief Keef’s “Faneto.” DeVito threw his arms in the air and bobbed his head once the Orange took a 10-point lead into the fourth. He strutted down the sideline as the fake crowd noise drowned out the music and the Georgia Tech offense returned to the field.

A virus-related delay and a lack of fans marred the unveiling of a new Dome, but the defense performed to the same standard of the past three weeks: limiting the Yellow Jackets to 178 passing yards, forcing five turnovers and doing enough to stay in the game.

This time, though, DeVito had a reason to dance.

The post After delayed kickoff, SU cruises past Georgia Tech, 37-20, for 1st win appeared first on The Daily Orange.