Robert Hanna parked in his newly-appointed spot in the deep middle third of the field, watching Georgia Tech quarterback Jeff Sims’ eyes. Hanna just waited. For his first career interception, in his first-ever start, all Hanna had to do was drop to one knee and let Sims’ overthrown pass fall into his arms.

An airborne chest bump followed with his hometown friend and defensive back Neil Nunn Jr., then a bear hug from linebacker Mikel Jones. Hours earlier, Hanna, a true freshman, was thrust into the rover position — a role coach Dino Babers has likened to baseball’s center fielder — when preseason All-American safety Andre Cisco got injured in warmups. Now Hanna was delivering.

Back home in South Florida, no one who’s seen Hanna play growing up was surprised, his high school coach Mike Manasco said. They’ve all seen this before: Hanna reads the quarterback’s eyes, puts himself in the right position and comes away with the ball. They weren’t surprised when they saw him do it earlier in the game either, diving for an interception which was negated by a pass interference penalty. Even his final statline — a team-high nine tackles and a pick — felt almost routine.

“From day one, I knew he was going to be a Division I difference-maker,” Manasco said.

With Cisco sidelined from an unknown period of time and redshirt junior safety Eric Coley also out with an injury, it’s unclear how much — and for how long — Syracuse (1-2, 1-2 Atlantic Coast) will have to rely on Hanna. But if the Georgia Tech game is any indication, the true freshman is primed to help lead one of the best secondaries in the ACC.

“I knew that once he was given the opportunity, he was going to be ready to go,” his uncle, Ray Baker said.

Through the first two weeks of the season, losses to North Carolina and Pittsburgh, Hanna didn’t play a snap. For the first time in his life, Hanna wasn’t one of the best players on the team. He grew eager for playing time and frequently called Baker, who was also his defensive backs coach at Miami Palmetto High School.

“All I need is for them to give me a shot so I can show them that I can perform on this level,” Baker remembers Hanna saying. Baker told him to remain patient. “Your time will come.”

Hanna grew up in Miami Gardens with his mom, but moved in with his uncle in ninth grade. In Homestead, 45 minutes south of downtown Miami, Hanna could attend Miami Palmetto and play for Baker. The new school gave Hanna a better chance to reach the next level, both academically and on the gridiron, Baker said.

Hanna played his senior season unsure of where he’d attend college, and he did it with a shoulder injury he sustained in preseason seven-on-sevens. He led a secondary group that will send two Class of 2021 four-stars, Jason Marshall and Corey Collier, to University of Florida and one three-star, Derrick Edwards, to Louisville.

Soft-spoken off the field, Hanna earned the team’s respect by leading by example, playing through pain and showcasing advanced football IQ. At one point, when Palmetto’s middle linebacker suffered an injury, the coaches trusted Hanna to step into an inside linebacker role.

“You can’t out-formation a kid like him,” Manasco said. “He’s more of a coach on the field because of his ability to know what’s coming.” 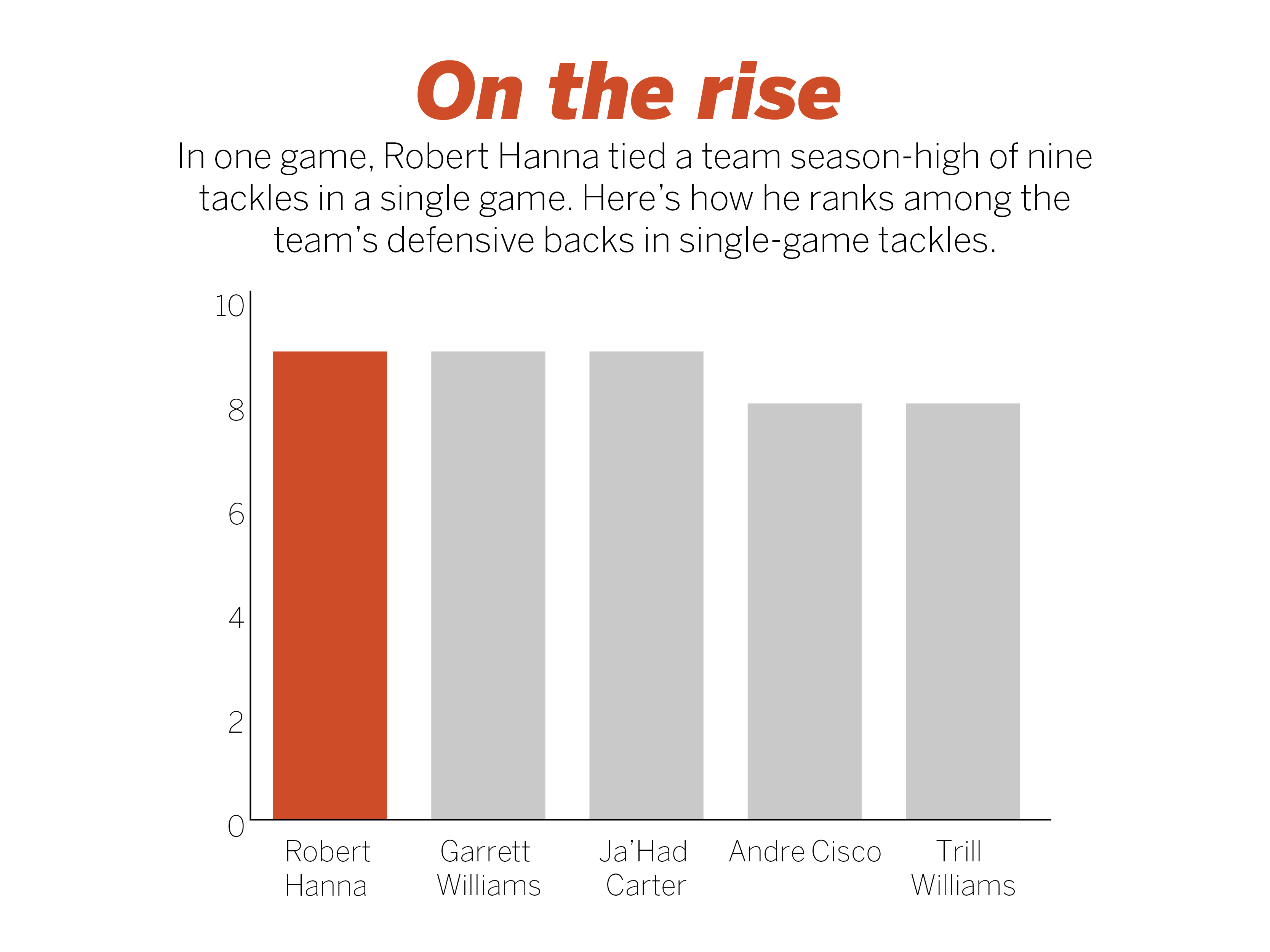 In Palmetto’s 10-2 2019 season, Baker estimates Hanna recorded about 60 tackles and two interceptions — one he ran back for a touchdown — while playing out of position and with an injured shoulder. During that season, Hanna developed a strong relationship with SU defensive backs coach Nick Monroe and committed in June 2019. Hanna had a minor shoulder surgery after the season before heading to central New York.

And now, without Cisco and Coley, Hanna’s already been put to the test. Babers said on Monday, “We got some pups out there” in the secondary, likely referring to Hanna and freshman defensive back Ja’Had Carter.

Baker and Manasco said Hanna’s “through the roof” football IQ gives him a chance to make an immediate impact regardless of experience. Without a traditional offseason, young players like Hanna who pick up the playbook quicker might have more of a chance than usual, Babers said. Hanna has habitually studied game film since peewee, Baker said. When he spots an opponents’ tendency on tape, he’ll excitedly call his uncle to point out the revelation.

When Cisco and Coley return, Babers said he’s looking forward to having the freshmen in the rotation to spell the veterans. Still, Hanna has earned a role, and that’s exactly what those who know him expected.

“The more he plays, the more comfortable he’s going to get,” Baker said. “I don’t have a doubt in my mind he’s going to step up to the plate for the Orange.”

The post After breakout performance, Robert Hanna is ready to lift SU secondary appeared first on The Daily Orange.