Syracuse (12-4, 4-2 Atlantic Coast) ended the regular season losing 2-1 to then-No. 5 Louisville and defeating Cornell, 6-0. The Orange are ranked No. 9 in the National Field Hockey Coaches Association poll and will enter the ACC Tournament — set to be hosted at Syracuse’s J.S. Coyne Stadium for the first time in school history — as the second seed.

The Orange only sit behind first-seed Louisville, who is ranked at No. 4 in the current NFHCA poll.

Throughout the regular season, Syracuse found success behind its starting backline trio of Sienna Pegram, Eefke van den Nieuwenhof and SJ Quigley. The trio has served as a foundation for SU’s squad, consistently limiting opposing possession and attacking opportunities. SU’s defensive unit held opponents to just a goal per game and 6.4 shots.

Goalkeeper Brooke Borzymowski has also significantly contributed to Syracuse’s strong defensive structure. The freshman has made a total of 39 saves throughout the regular season and ended the year with a 0.765 save percentage, third-best in the ACC.

Defensive security enabled SU’s midfield and forward players to bring the ball up to create goal-scoring chances and execute a high-press system when opponents held possession in their own half. Syracuse scored 3.44 goals per game and registered over 19 shots per game as a result.

The Orange consistently outshot opponents, especially unranked ones. This formula produced results, as SU earned its longest win streak since 2015 — when Syracuse went on to win the NCAA Tournament — before losing to Nov. 16 Virginia 2-1.

But along the way, the Orange has failed to capitalize on offensive chances. SU ended the regular season with just over 200 more shots than its opponents but finished with a marginally better shot-to-goal conversion rate. Converting shots into goals will be SU’s main concern heading into the ACC Tournament.

Path to the title 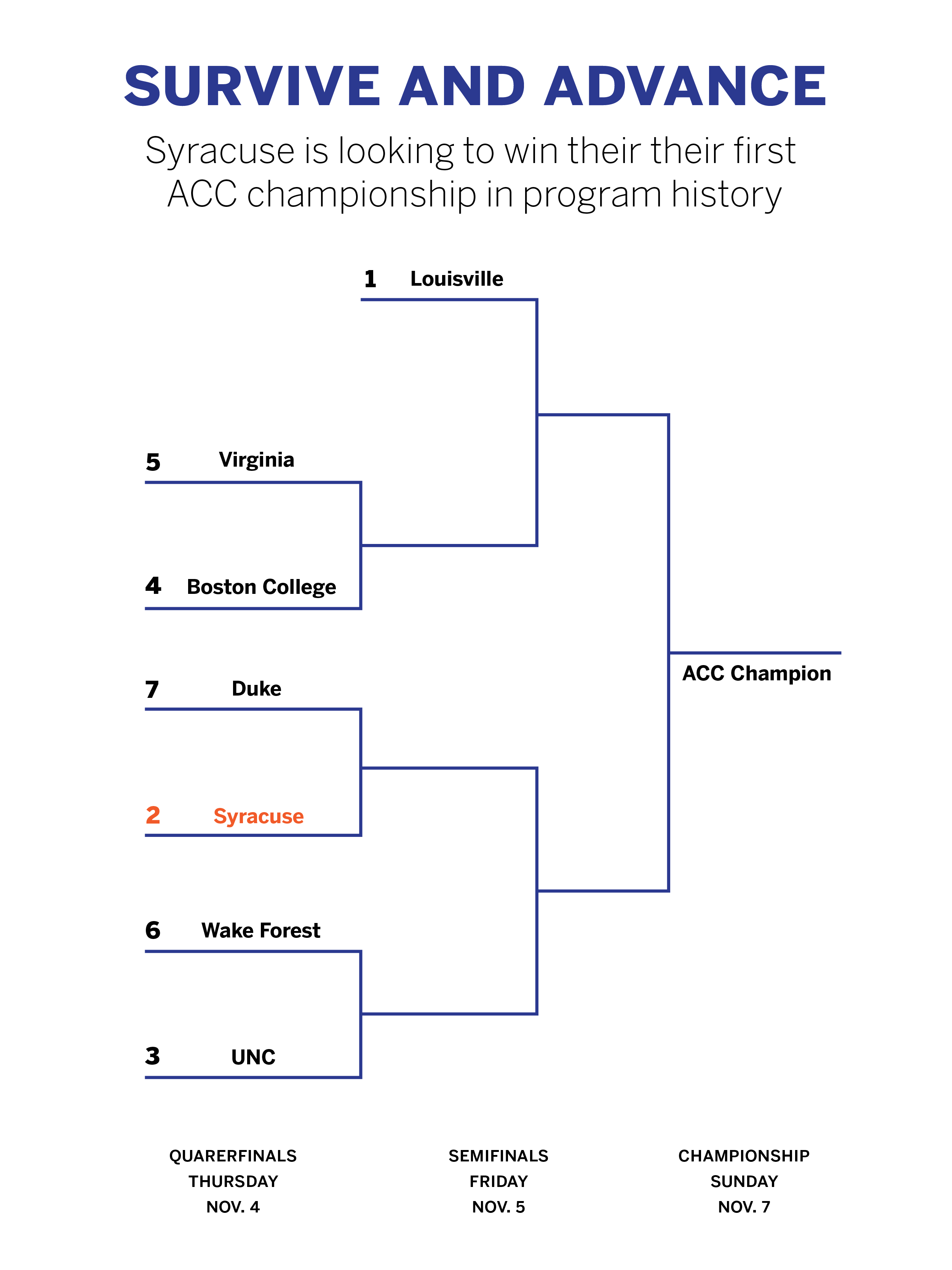 Syracuse will face seventh-seeded Duke (6-10, 0-6 ACC) in the quarterfinals of the competition on Thursday afternoon.The Orange defeated the Blue Devils 7-2 in the only prior matchup between the teams this season.

If the Orange win, they will advance to the semifinals of the tournament and match up against either North Carolina (10-6, 4-2 ACC) or Wake Forest (7-9, 1-5 ACC) in the quarterfinals. Syracuse topped both teams in the regular season, defeating then-No. 5 North Carolina for the first time in six years on Oct. 1 and then-No. 15 Wake Forest a week later. Semifinal contests will be played on Friday. 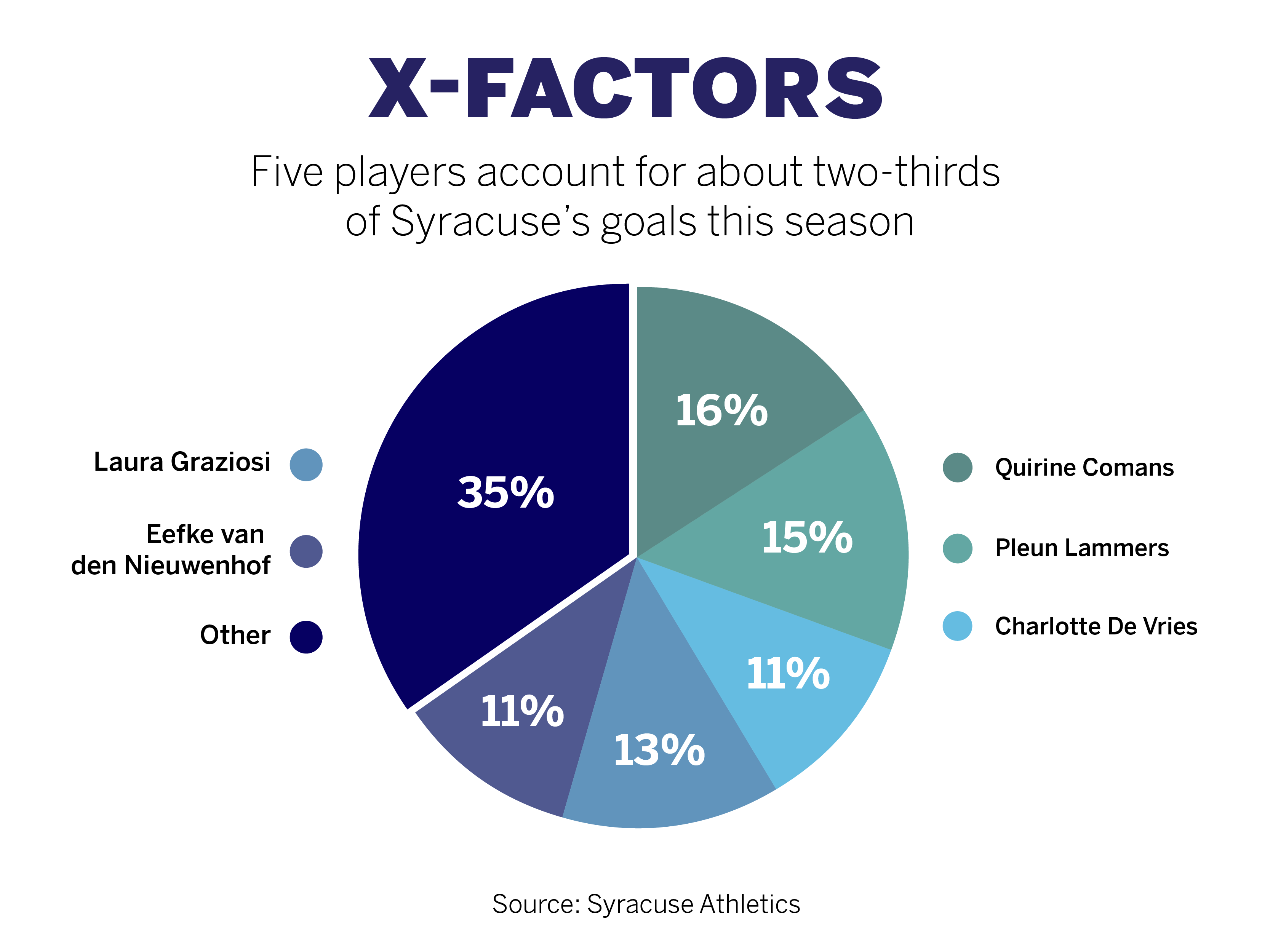 Quirine Comans:
Heading into the postseason, Comans leads SU in offensive production with nine goals and eight assists. The Netherlands native has taken control of SU’s right flank, alternating between the right forward and midfield positions throughout the course of the regular season. She was also named to the All-ACC First Team on Wednesday.

Pleun Lammers:
Fellow forward Lammers was also named to the All-ACC First Team, and is right behind Comans in offensive production with eight goals and four assists. Lammers is SU’s primary option at the center forward position but hasn’t played since the Orange’s 2-1 victory over then-No. 15 Wake Forest on Oct. 8 for unknown reasons.

Charlotte de Vries:
De Vries didn’t join the team until SU’s third game of the season, but she’s become a crucial part of the Orange’s offense as the season progressed. De Vries initially played in the left forward position before shifting to the right midfield position for the second half of the season. On the right flank, de Vries has consistently connected with Comans to create scoring chances for the Orange.

Laura Graziosi:
While Graziosi didn’t earn any ACC honors, the left midfielder has been a leader for the Orange on both ends of the field. The senior facilitates offensive possessions but covers enough ground to help limit counterattacks. Graziosi totaled seven goals and five assists in 2021 and also scored each of Syracuse’s three penalty strokes this season. She will be the probable candidate to step up again if a penalty opportunity arises throughout the ACC Tournament.

Eefke van den Nieuwenhof:
As SU’s center back, Nieuwenhof is the Orange’s last line of defense. She’s the first to clear the ball from Syracuse’s defensive shooting circle or initiate a counterattack with a lofted pass up the field. Nieuwenhof is also SU’s primary option for penalty corner shots, as the defender scored six goals on those plays this season.

The post ACC Tournament Preview: A look into Syracuse field hockey’s road ahead appeared first on The Daily Orange.