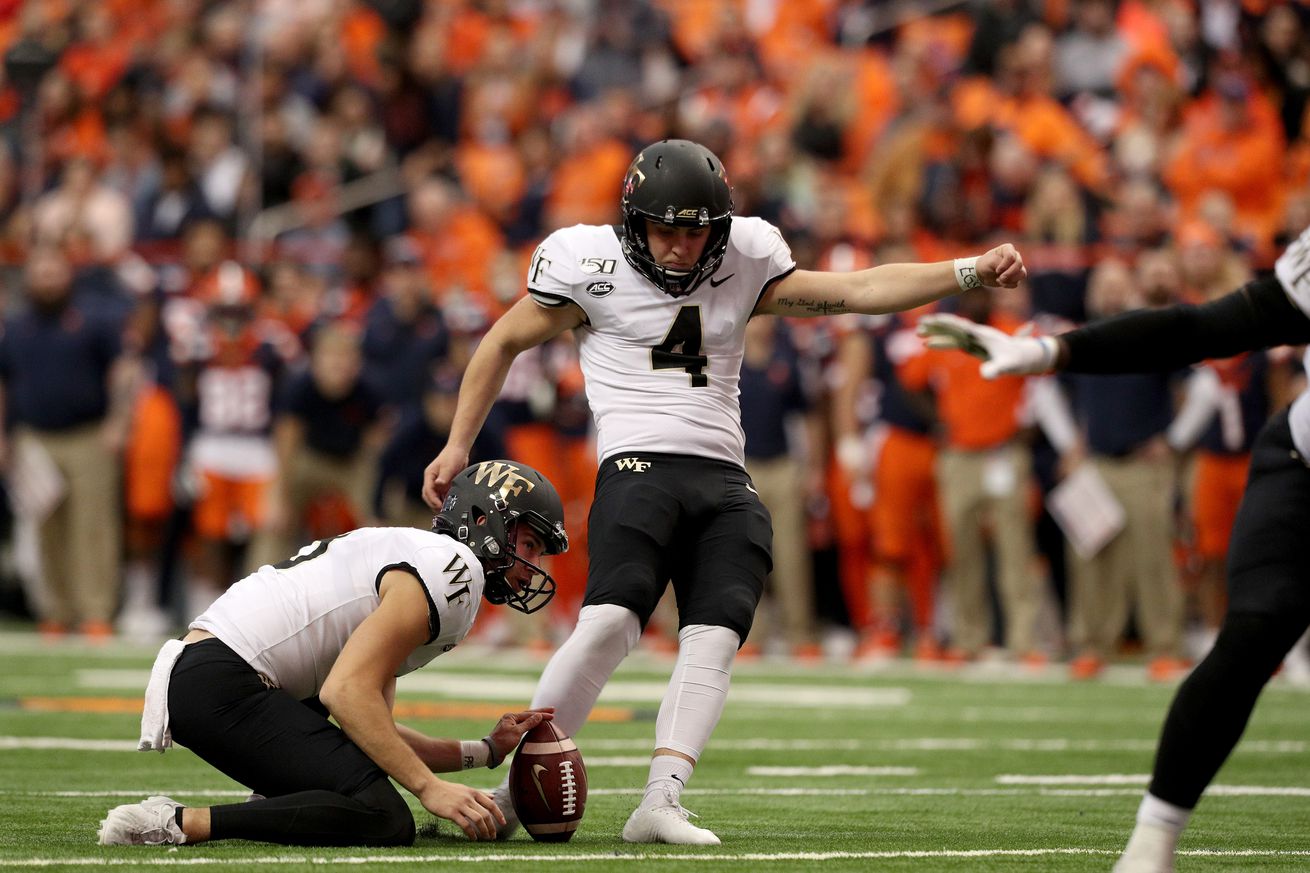 How does Syracuse stack up in Orange fans’ favorite position group?

Syracuse Orange special teams remained a strength in 2019, as the punt unit in particular was one of the country’s best. But now the team most figure out how to move on from ace punter and kickoff specialist Sterling Hofrichter. This is not going to be a simple transition, given how excellent Hof was in both roles.

For now, games are happening for Syracuse this fall, so we’re wrapping up our series previewing each position group in the conference, and looking at how the Orange stack up. Back on Wednesday, we looked at the Orange’s opportunity to continue special teams success despite personnel changes. Now, we finish our conference position preview series.

(note: we’ve added Notre Dame into these from the time it was announced they’d be playing in the ACC this season, but didn’t redo the previous ones because it’s a larger effort to have to fix rankings, top players, etc.)

Wake Forest’s Nick Sciba had a perfect record on field goals until he recorded his first (and only) miss of the season vs. Syracuse in last season’s finale, and going 24-of-25 on the year made him the top kicker in the conference. He was one of three players in the league to hit 85% or more — joined by NC State’s Chris Dunn (87.5%) and SU’s Andre Szmyt (85%). The Orange’s Sterling Hofrichter was the ACC’s top punter per Pro Football Focus grades, even if NC State’s Trenton Gill had the top average in the conference at 47.55 yards per punt.

On kick returns, Virginia’s Joe Reed was elite, averaging 33.17 yards per return on 24 tries and taking two kicks back for touchdowns. Duke’s Damond Philyaw-Johnson wasn’t too far behind him either, averaging 32.29 per return and also scoring two touchdowns in the process. Louisville’s Hassan Hall was the other ACC player to score a kick return touchdown. On punt returns, two players averaged 10 yards or more: Miami’s K.J. Osborn (15.94 per) and Duke’s Josh Blackwell (10.92 per).

Sciba returns for Wake and is a good bet to be the league’s top kicker again — though Szmyt is back as well, and so is Dunn. Any of those three players could hit 20 or more field goals at an 85% clip or better, and the same goes for Brian Delaney (Virginia), Brian Johnson (Virginia Tech) or Jonathan Doerer (Notre Dame). Needless to say, this is a very deep group of kickers in the league.

Gill comes back for NC State, and he’ll be challenged for the new punting crown by Virginia Tech’s Oscar Bradburn, Clemson’s Will Spiers and Georgia Tech’s Presley Harvin III. Philyaw-Johnson and Hall returns on the kick return front, as do UNC’s Michael Carter and Boston College’s Travis Levy. Blackwell is the top punt returner from a production standpoint, though Levy, Clemson’s Amari Rodgers and NC State’s Thayer Thomas are all arguably better punt returners.

State’s punting and kicking prowess was noted above, but the return game could succeed as well. The aforementioned Thomas could wind up being the ACC’s top punt returner if healthy, but there’s a bigger question on kicks. Solve that, and they’re potentially the league’s top special teams unit.

For now, though, the best group is actually the Hokies’. Bradburn has a big leg at punter and Johnson could parlay second half of the year accuracy (hit his final 12 field goals) into an impressive full season. Tech’s Tayvlon Richardson is another emerging talent on punt returns, and the same goes for Keshawn King on kicks if he gets enough chances (he only returned six last year, but averaged 28 yards per).

Clemson’s special teams doesn’t get to put to use as much as some others given how dynamic the offense is. Still, Rodgers is a standout on punt returns when healthy, and Spiers could wind up challenging as the ACC’s top punter if he actually gets enough attempts.

Notre Dame has Doerer manning kicks, but also lost their top punt returner and have questionable results at punter and on kick returns. Wake Forest has Sciba, which is a major positive and a potential season-saving bailout with O-line questions and a quarterback change. But beyond him, they’re starting over on kick and punt returns, and must replace standout punter Dom Maggio.

Florida State’s special teams is not set up for success given recent struggles and offseason departures by some of the players that did seem like moderate bright spots. However, it’s notable that Mike Norvell’s last two Memphis teams were both top 40 on special teams, per Pro Football Focus — including a No. 6 ranking in 2019. They’ll need that help since the ‘Noles are breaking in a freshman kicker and potentially a frosh punter as well. The ‘Noles have also gotten iffy results on punt returns (D.J. Matthews) and kicks (Keyshawn Helton and Isaiah Bolden) to-date.

Top three kickers in the ACC:

Top three punters in the ACC:

I’d slot the Orange in among the top half of teams in the ACC (maybe as high as fifth), but without knowing what we’re getting out of the punting game or on kickoffs, it’s hard to see them at the same elite level we’ve witnessed in recent years. James Williams or Nolan Cooney could very well deliver there, since most of SU’s recent special teams starters have been players seemingly out of nowhere. But with some likely trials still to run on punt and kick returns too (even if we’re pretty sure that Jawhar Jordan and Trill Williams will likely be upgrades), it could be a slight rebuild on special teams for Syracuse.