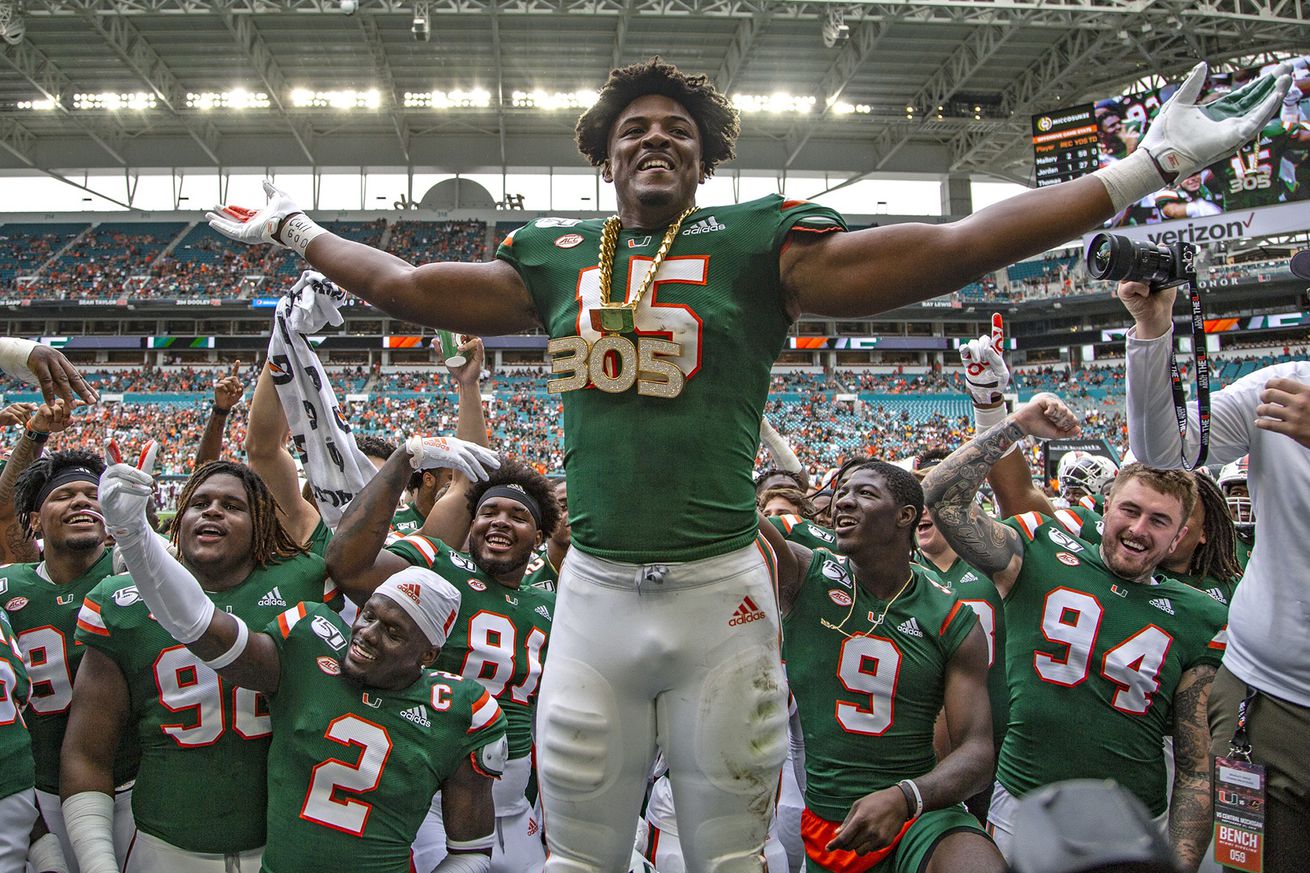 The Syracuse Orange line loses a lot from last year, and the questions for this defense start there as a result. This was a group built on pass-rushing ability, and when that aspect of their game struggled in 2018-19, other problems usually followed. Now we get to see what this front can do without the players responsible for 14 of last year’s 30 sacks.

For now, it seems like we’re going forward with the idea of football for 2020, so in response, we’re continuing this series. On Wednesday, we talked in-depth about Syracuse’s defensive line. And now we take a look at the rest of the conference in the:

(also, note that we’re adding Notre Dame into these for the rest of the series in 2020, but won’t be redoing the previous ones because it’s a larger effort to have to fix rankings, top players, etc.)

Miami freshman end Gregory Rousseau burst onto the scene last year while leading the conference in tackles for loss with 19.5 (15.5 sacks), yet he wasn’t the only D-lineman to put up big numbers. Wake Forest’s Carlos Basham had 18 TFLs of his own, and Duke’s Chris Rumph had 13.5. Pitt’s Patrick Jones and Jalen Twyman each recorded 12, as did NC State’s Larrell Murchison.

Florida State’s Marvin Wilson would’ve been right up there with them if not for missing a few games — though he still collected 8.5 TFLs in nine contests despite being met with constant double-teams. Duke’s Victor Dimukeje had 9.5 TFLs, but 8.5 of those were sacks, making him a top-five player in the conference in that stat category. While Notre Dame wasn’t “in the conference” last year, senior Khalid Kareem still impressed with 10 TFLs and would’ve contended for all-conference honors in the ACC.

Well, just about everyone is back from last season, which means we have to cross our fingers that Syracuse’s offensive line is up to the task. Rousseau returns and is joined by Temple transfer Quincy Roche on the Miami line. At Wake Forest, Basham is back as well, along with his entire line from last year. Duke doesn’t return as much, but still has Rumph and Dimukeje, which should help plenty.

Pitt’s interior line is one of the best tandems in the country, between Twyman and Jones, and getting Rashad Weaver back only helps more after he missed all of 2019. At Clemson, top performers like Tyler Davis and Xavier Thomas haven’t put up huge numbers to-date, but at least some of that stems from the fact that they haven’t needed to be on the field much with games getting out of hand and the Tigers being able to rest starters so early.

Miami’s veteran group was looking good without Roche, given the presence of Rousseau and Jonathan Ford. However, Roche should really elevate this pass-rush and provide the conference’s top tandem on the edge. At Temple last year, he had 19 tackles for loss (13 sacks) and six pass break-ups. Now paired with a star talent like Rousseau, that should mean a field day for one or both players this fall.

We’ve touched on Pitt a bit above, but it’s worth noting that the team’s 51 sacks last year were tied for second in the country — and that’s without Weaver involved at all. Better yet for the Panthers, pretty much everyone that accounted for those sacks is back along with Weaver. That makes Pittsburgh a scary group. Clemson should be one as well this year, led by Justin Foster, Davis and Xavier Thomas. After a bit of a down year for the Tigers by their standards, this year’s front four should once again be the force people are used to seeing (yay?).

Louisville was middle of the road last year in terms of sacks, and most of that pressure came from the linebackers last year — not the front three. Exacerbating matters this year, there’s only one returning starter on the line this year (Tabarius Peterson) and no returning linemen had more than four tackles for loss last season.

At BC, the Eagles had one of the worst pass rushes in the P5 last season, and now plug a lot of questions into a new system to try and fix it. Still, players like TJ Rayam, Brandon Barlow and Marcus Valdez could all make late-career strides and improve this group. Georgia Tech was an even worse pass-rushing team last year (just 17 sacks on the season), yet has even less D-line experience to bank on in 2020. Tackle Ja’Quon Griffin (2.5) is the only returning D-lineman with more than a sack to their name last year.

SU narrowly avoids the bottom three, but I’d still rank them 12th, and just barely above the Eagles. As we know, ‘Cuse lost Alton Robinson, Kendall Coleman and Brandon Berry (a combined 14 sacks last year), but the one saving grace is experience at the top of the depth chart. How good that experience is remains TBD. Yet, plugging a healthy McKinley Williams in with Josh Black alone should at least calm some nerves. Add in the potential of Kingsley Jonathan and McNeese State transfer Cody Roscoe, and we’re at least working with a veteran group with some upside. Now we just have to hope no one gets hurt…