Abby Moloughney already scored two goals heading into overtime Syracuse’s College Hockey America Tournament semifinal matchup with RIT. The senior scored less than a minute into the game to give the Orange an early lead and then tied it midway through the third period.

But with 6:33 left in overtime, Moloughney quickly skated down the left wing in an attempt to shoot. With multiple defenders in her vicinity, Moloughney had to readjust and take the shot. Sarah Coe initially gloved it, but she couldn’t hold onto it as the puck flew past her into the net. Moloughney threw up her hands and jumped as she sent Syracuse to the CHA Championship.

Moloughney’s mother, Kristen Wubs, stood with the fellow Syracuse parents as the puck went in. She was ecstatic as she had just seen her daughter play “the best game of her career.”

“Her confidence has grown a lot. I’ve seen it year after year,” said Kristen. “I think this is her best year yet.”

Moloughney’s hat trick led to her finishing with Syracuse’s third-most career points with 105. She has indicated that this season will be her last with SU, and in her senior season, she remained Syracuse’s top forward with the most points since the start of January.

Moloughney never just wanted to be a hockey player, her father, Mike Moloughney, said. He said she preferred dance when she was younger even though she had an ice rink in her backyard. But he pushed her into trying out for novice teams when she was 7 years old, as Mike figured she could skate as well as any of the other girls, he said. 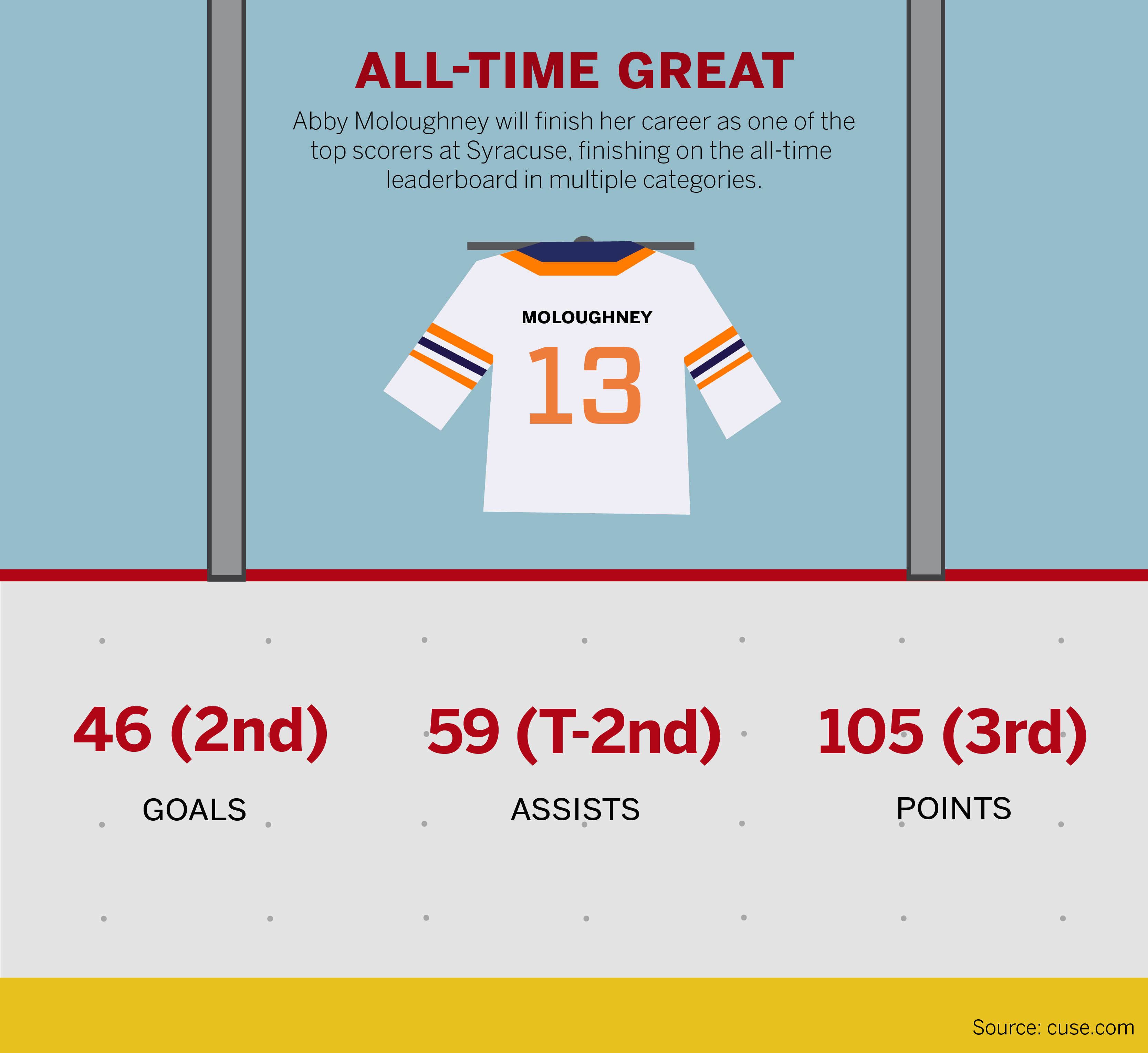 Moloughney started to realize she had speed, and Mike said she always wanted to win races and battles. She did that with track and field, but Mike said she could do it much more so with hockey, even winning the Bell Capital Cup relay races in 2012.

“(Hockey) allowed her to be in a lot of races a lot of time,” Mike said. “Because really, hockey is about races and battles.”

Her speed has been effective at the novice level, the Provincial Women’s Hockey League and now at Syracuse. At SU, Moloughney’s teammates have said her dominant speed propels her to success.

Following the CHA semifinals, SU advanced to the final against Mercyhurst. The Orange had gone 2-2 against the Lakers, but one of the losses included a 9-0 shutout. Their offensive struggles had been highlighted by Moloughney’s lack of production. In the regular season against Mercyhurst, Syracuse’s top forward recorded just one assist. But in the CHA championship game, she greatly improved her play.

The game was still scoreless with under two minutes remaining in the first period. The puck was near the boards with Victoria Klimek battling for it with two Lakers. To get in front of goaltender Ena Nystrøm, Moloughney had to get past K.K. Thiessen, stopping and moving back to create open space. And Klimek, winning her battle along the boards, sent a wrist shot past Moloughney, who redirected the puck into the left corner of the net.

That goal was a prime example of Moloughney using her speed and scoring in unlikely situations. Moloughney is on the top power-play unit with freshman Sarah Marchand, where the team will run a “reverse umbrella” with Marchand behind the net and Moloughney at the wing.

“I give her the puck and I know she’ll score more than 50% of the time,” Marchand said. “I’ll put it there and she will find the back of the net somehow.” 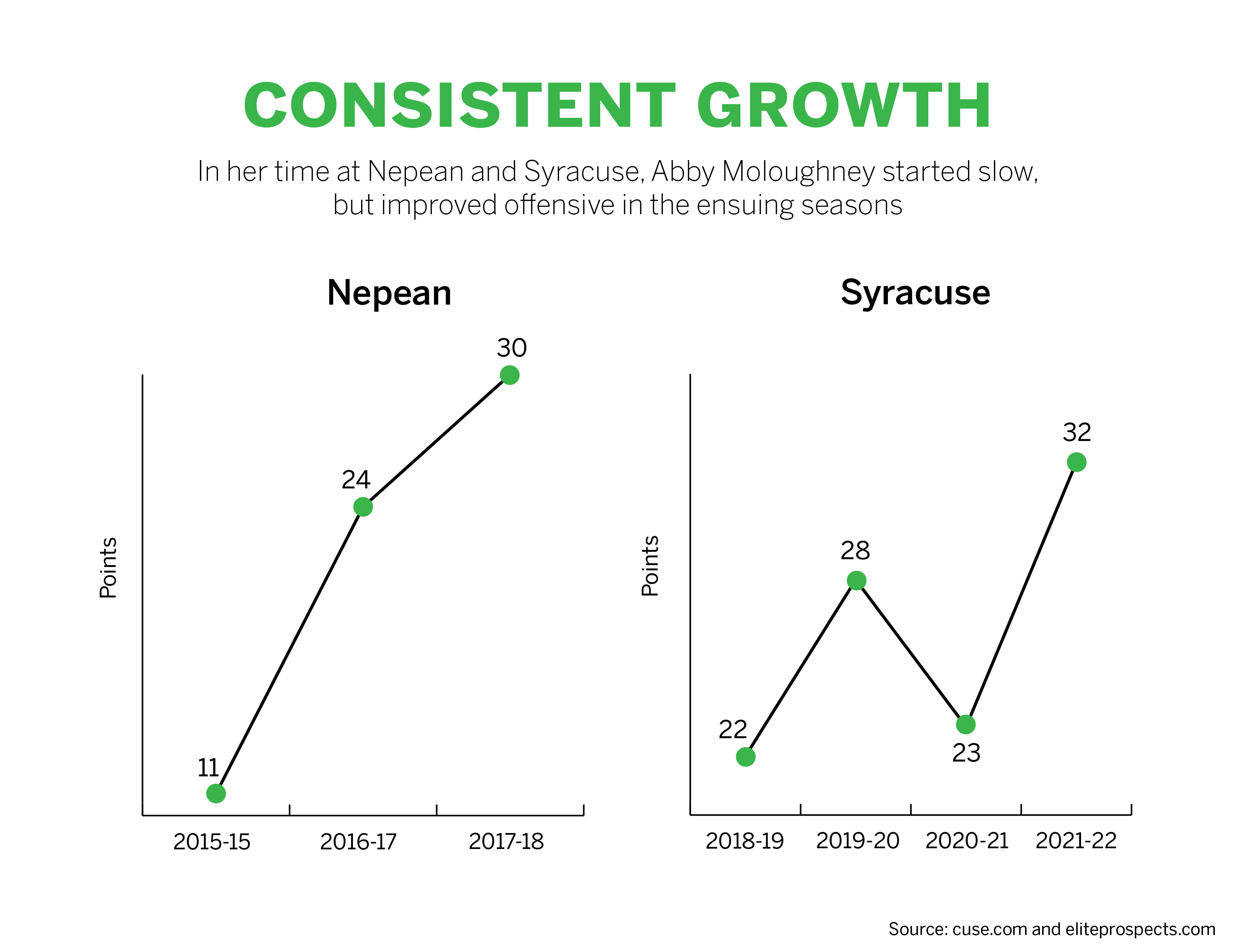 According to her coaches, her ability has always been part of what made Moloughney noticeable with the Nepean Jr. Wildcats of the PWHL. As Moloughney’s play developed, she opened herself up to more opportunities kids her age were not receiving. When she was 15 years old, she played for the Wildcats In three full seasons with the Wildcats, a team that featured future SU teammates Lauren Bellefontaine and Shelby Calof, Moloughney recorded 65 points.

But in her first full year, Moloughney struggled initially, scoring only 11 points over 38 games. She improved in the following two seasons, recording 24 points in her second full season. And then in 2017-18, she led the Wildcats in goals with 14. Wildcats head coach Bruce MacDonald said he remembered how Moloughney anticipated and read plays allowing her to score from anywhere on the ice.

Moloughney proved she could score from odd spots on the ice in January against Lindenwood. While holding the puck, she had Lions defenseman Sena Takenaka pressuring her on the boards, and Moloughney decided to move away from the net and take Takenaka off of her. Moloughney quickly pivoted to create some space. She ended up in the right faceoff circle with a very tight angle at the goal, taking a snapshot that went into the top left corner of the net.

“She’s able to get to the area that the kids can’t get to because she’s a little step ahead,” MacDonald said. “And she can score goals when you don’t think that the play’s there.”