When former Syracuse safety Keeon Walker played against Rutgers, the New Jersey native knew there was an additional layer of importance: he needed to prove he didn’t make a mistake by choosing upstate New York over his hometown team.

“You just feel like you’re betraying your state, your school, being a Jersey kid,” said Walker, who played for the Orange between 1999-2002. “When you play them, you needed to show out.”

Jameel Dumas, another New Jersey native who played linebacker at SU between 2000-03, said he needed to have a strong on-field performance to publicly justify his decision not to stay in New Jersey.

When Dumas returned home for Christmas after football season, he wanted to say that “last time I was here, I walked away with a dub.” Those bragging rights were critical too, because the SU-Rutgers rivalry featured a number of former teammates, opponents and friends from his hometown area.

“Just having that feeling of being the best school in the northeast,” Dumas said.

A lot has changed since. The recruiting scene isn’t the same as a few decades ago, head coach Dino Babers said on Monday, because players are more likely to look at schools all over the country. There’s not as much of an emphasis on a player’s hometown team. Other schools have joined the northeast recruiting conversation, too. 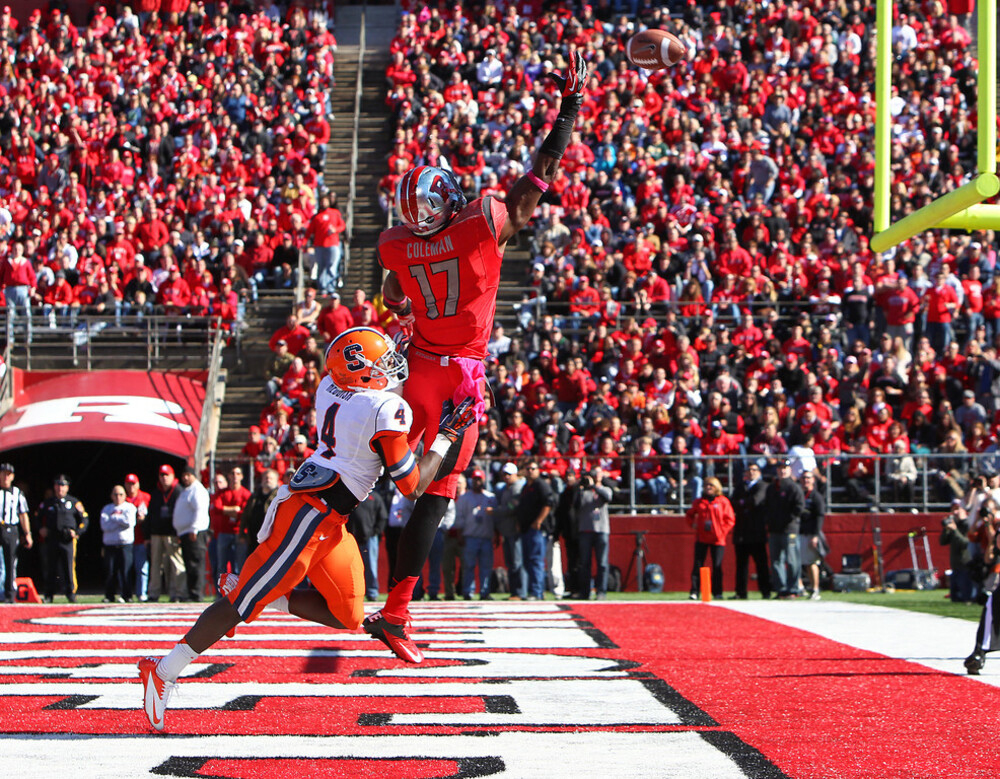 The recruiting scene isn’t the same as a few decades ago, head coach Dino Babers said on Monday.Courtesy of Rutgers Athletics

But as Syracuse and Rutgers face off on Saturday, 107 years after the series first began, the Orange have 10 players from New Jersey, including quarterback Tommy DeVito, wide receiver Taj Harris, true freshman Duce Chestnut and return specialist Trebor Pena. Even now, almost a decade since Syracuse and Rutgers last met before the two split off from the Big East, the essence of the rivalry still remains.

“It’s always gonna be that rivalry of bragging rights,” said Bruce Williams, who was a wide receiver at SU from 2005-08.

DeVito said the matchup has been a topic of discussion and a source of excitement for him since it was originally announced for the 2020 season. The pandemic as well as Rutgers’ all-Big Ten schedule last season pushed the game to 2021, and with the delay, the game moved from Piscataway, New Jersey, to the Carrier Dome.

Like the former SU players from New Jersey, DeVito, Harris and Chestnut said they have extra motivation playing against their hometown team. All three received recruiting offers from Rutgers. There’s an additional layer of significance to these players because it’s important to prove to others — and to themselves — that they made the right decision to come to New York instead of staying in New Jersey. That decision will be in “the back of my mind,” Chestnut said.

“Home team — I love to get after those guys,” Harris said.

DeVito and Chestnut said they have a lot of friends and family making the short drive to the Dome for Saturday’s game. They’ve been talking trash with former teammates and friends, to which DeVito said you “got to get it going early.” He explained a couple “unfortunate meetings” with Rutgers linebacker Drew Singleton when the two played each other in high school. Chestnut said he’s been talking smack with his childhood best friend, Rutgers defensive back Alijah Clark, ever since the two committed to their respective schools and saw the schedule.

Historically, Syracuse has dominated the all-time series 30-12-1. During the Paul Pasqualoni era, beating Rutgers was “a personal challenge” because of the importance of controlling recruiting areas like New Jersey, Connecticut, New York and Pennsylvania, said Perry Patterson, an SU quarterback from 2003-06. There was a “battle line” around New York City, Williams added.

“If you can get one kid because Syracuse beats Rutgers, then that’s a plus,” Walker said.

Pasqualoni’s pride in SU’s dominance over Rutgers carried over to his players, Patterson said. The head coach would give special pregame speeches ahead of games against Rutgers. Players placed more emphasis on the details during Rutgers week too, Dumas said, and they were mentally locked in all week, Williams said. Patterson, a native of Lancaster, Pennsylvania, didn’t consider the matchup with Rutgers anything special — until Pasqualoni’s passion rubbed off on him.

“When we went on the field, we were kind of a representation of his feelings towards that game,” Patterson said.

Dominating northeastern recruiting and leaving “lower star recruits” for the other teams was the key, Patterson added. At the time, recruits put a lot of weight on which team was winning head-to-head battles, Walker said. A team that loses to its rivals is likely to lose recruits based on that result. It’s a selling point when making recruiting pitches, too — recruits want to be “on the right side of the fence with this rivalry.”

“Winning Jersey and getting these recruits from Jersey — it’s huge. When Syracuse was good, and they were beating Rutgers, they always had the advantage of having a kid from Jersey,” Walker said.

For SU players from New Jersey, a win over Rutgers was confirmation they chose the better school. Walker and Dumas said they never considered attending Rutgers because growing up, they watched the Scarlet Knights on TV, but weren’t particularly impressed with the program.

When they’d watch film from Rutgers’ games earlier in the season in preparation for the rivalry game, the stands were mostly empty. But when Syracuse showed up in Piscataway, it was much more full, Dumas said. 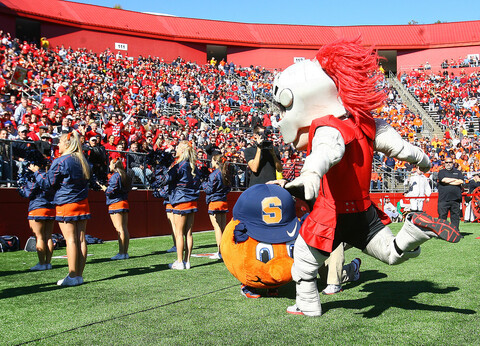 For SU players from New Jersey, a win over Rutgers was confirmation they chose the better school. Daily Orange File Photo

“You have a lot of guys from Jersey playing in Jersey against Jersey,” Dumas said. “(The) atmosphere would get a little bit more electric.”

Years later, highlight plays against Rutgers are still memorable. Patterson remembers a touchdown throw against Rutgers. Walker said he remembers tackling Rutgers running back Ravon Anderson, his former high school teammate. Dumas said he remembers the joy of lighting up a Rutgers tight end right in front of its bench and looking to RU defensive back Raheem Orr — his former teammate — after making the big hit.

Rutgers’ rise under head coach Greg Schiano, who joined the Scarlet Knights in 2001, corresponded with Syracuse’s decline in recruitment. After years of dominating Rutgers, including a stretch where SU won 12 consecutive matchups from the late 80s to late 90s, the Orange didn’t win a single game against RU between 2005-08. The Scarlet Knights made six bowls in seven years under Schiano, while SU made one in that same timeframe.

“It was like a pendulum swing,” Patterson said. “(The Scarlet Knights) were building on something. So the moment we had the coaching change, and we had to start over, they had all the momentum they needed. … They were due for some success.”

(Rutgers was) building on something. So the moment we had the coaching change, and we had to start over, they had all the momentum they needed.

Now in 2021, after a 10-year hiatus, Schiano is back at Rutgers. It’s nostalgic to hear that “a staple of that program” and a mainstay of the rivalry’s storied history has returned, Patterson said. Schiano was able to turn a mediocre Rutgers team into a ranked one at points during the 2010s, and this transition started with recruiting in New Jersey.

The understanding that Syracuse-Rutgers is a “recruiting battle” remains, despite changes in the recruiting landscape over the years. On Monday, Babers called New Jersey one of the top recruiting areas for the Orange. The game still has the same importance because the competition is over what Walker refers to as tri-state area control. There may not be as many recruits who make decisions because of the rivalry, but it could still amount to a small handful, Walker said.

“Somebody is gonna come out on top with the bragging rights,” Dumas said. “And once again, a little edge in the recruiting battle.”

The post ‘A rivalry of bragging rights’: What return of Syracuse vs Rutgers football means appeared first on The Daily Orange.