Before Sept. 1 arrived and college coaches began recruiting him, Jimmy McCool’s high school coach gave him a notebook. It was the same small, flip-page booklet with yellow and blue lines that Ryan Henry gave all his players at New Hampton (New Hampshire) School, one that he encouraged them to use as the centralized location for all their recruiting visit notes.

When McCool received his notebook, it was completely empty except for four handwritten questions on the top page — Henry’s go-to during recruiting calls: what role does the program play in academics, what’re the pillars of your program, why me, and how does the program’s culture fit into my overall school experience. “At least keep the top page,” Henry joked to McCool.

The first phone call came from Syracuse defensive coordinator Lelan Rogers at 12:40 a.m. on Sept. 1, the first Zoom session with SU’s coaching staff four days later, and the first official offer hours after that. McCool initially thought it was a prank call when his iPhone glowed with a 315 area code, but less than a week later he became the fourth commit in the Orange’s Class of 2022.

A junior in high school, McCool still has two years before he’ll contend for the starting goalie spot in the Carrier Dome. For now, he’s one of two four-star goalie prospects, with the other a Class of 2021 commit. But McCool’s parents and coaches describe the seventh-best goalie in 2022 as someone who can rise further in Inside Lacrosse’s rankings during his senior season and become an integral piece for a Syracuse team that finished last season as No. 1 in the country.

“The whole time, I kinda knew this was like where I wanted to end up,” McCool said. “I don’t want to let it get to the point where they’re like, ‘OK, it’s time to make a decision.’ I wanted them to know this wasn’t like a fallback plan, this is what I wanted.”

From the time McCool was in second or third grade — as he progressed through the 3d Lacrosse club program, New Hampton and then the U-15 national team — he hasn’t left the crease. He’d figured out that goalie was his favorite spot during the first few weeks of his lacrosse career, and the following summer he traveled down to a week-long goalie summer camp run by former Virginia goalie Tillman Johnson.

His father, Steve, said he recalled thinking McCool would hate getting pelted with balls. Tricia, McCool’s mother, knew her husband wanted him to play midfield. But when McCool hopped in the car after the first day, he said, “This is awesome, I love it,” Tricia remembered. 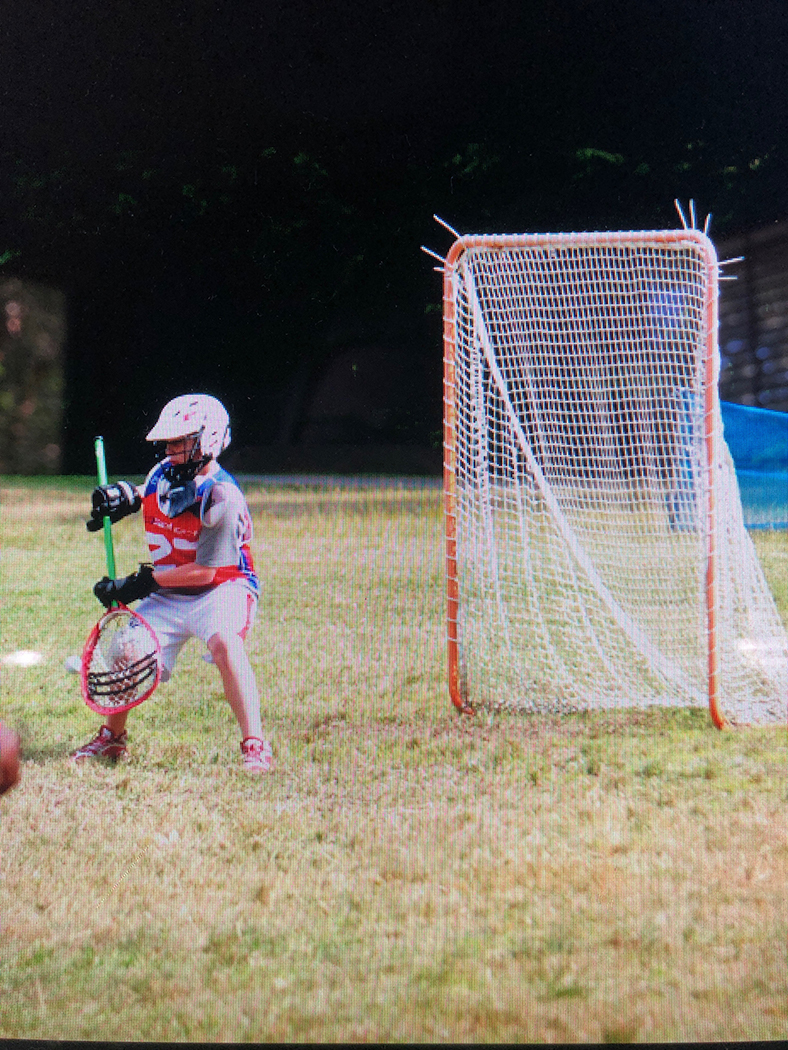 In the first few weeks of his lacrosse career, Jimmy McCool decided he wanted to play goalie and has stayed at that position ever since. Courtesy of Tricia McCool

McCool started with the local youth lacrosse circuit — playing one half on, one half off — and eventually joined 3d Lacrosse’s club program around second or third grade. In between practices and games, McCool’s two older brothers fired shot after shot at him as he stood with an old hockey helmet and lacrosse stick in a net marked by tape on their garage door. As each shot meshed into his stick or bounced off his chest, McCool’s mind flashed with the two rules his dad had instilled in him after Johnson’s goalie clinic: Don’t flinch in the net, and if you get hit by a shot, don’t rub it.

Over the years, those tennis and lacrosse balls from McCool’s older brothers left numerous dents in their door, and when they replaced the door a few years ago and bought a net, Tricia established a new rule: no more throwing up against it.

“They would just hum them in, and that taught me the pain tolerance side of things of being a goalie,” McCool said. “I can just eat up those shots because I’m really just honestly used to it.”

Building that toughness helped him maintain rigid posture in the cage by stabilizing his feet and taking away opposing attack’s primary shooting angles, a development that continued even after McCool arrived at New Hampton. Henry ran McCool through reactionary movement drills to work on that. Players rotated the ball to Henry in front of the cage and he’d either fire off a quick stick shot or fake and see if his goalie cheated. Other times, it’d be a step down shot. “(Goalies) shouldn’t be dancing around in the crease,” Henry said.

“They want to make these really acrobatic saves,” Henry said, “and when they go to get set they’re sometimes leaning on their toes and it’s almost like they’re off-balance.”

As a freshman with the Huskies, McCool split time with a sophomore goalie committed to a top-tier D-III school and helped them finish 10-5. That summer, he helped his 3d team as it won the Crab Feast Invitational despite numerous injuries and made the U-15 national team. “It was an eye-opener,” Steve said.

The two weeks leading up to McCool’s commitment were hectic. With the NCAA still in a dead period, and coaches not allowed to visit recruits in-person, McCool, in New Hampshire, and his parents, in their West Roxbury, Massachusetts, home, hopped from Zoom call to Zoom call and met with programs. Henry called Steve and Tricia every night to update them, just in case McCool forgot to write everything down in the notebook.

Last April, Henry was hired as a math teacher and head varsity lacrosse coach, leaving Jesuit High School in Florida soon after and beginning to contact all of the returning players, including McCool. They met at various lacrosse events that summer, spoke over Skype and FaceTime, and months later, Henry started teaching McCool Integrated Math III — the final stage of ALEKS, an online software used by New Hampton.

Each day, Henry’s class, which included his goalie, spent the final 35 minutes using ALEKS, a program that begins with an initial test at the beginning of freshman year and continues with each class as New Hampton students are required to finish their “pie” by the end of Integrated Math III, Henry said.

In the afternoon, the pair would stroll out to the lacrosse field along with the rest of the team. McCool would put his gear on. Henry would pick up his stick. And shot after shot, they worked on finishing McCool’s lacrosse pie, too.

The post A notebook, garage door dents and Jimmy McCool’s rise as a D-I prospect appeared first on The Daily Orange.