At the start of the fourth quarter in the opening round of The Basketball Tournament, Boeheim’s Army looked as if its $1 million prize dreams would falter against the Forces of Seoul. Trailing by seven points, Boeheim’s Army had an unfamiliar face at the forefront of its offense, Tyrese Rice.

The former Boston College guard hit five straight points at the beginning of the fourth quarter, and after BA’s offense erupted to take a 58-52 lead, Rice mimicked his antics again.

TBT follows an Elam Ending to the game, where, at the first dead ball under four minutes, there is a target amount of points set by adding eight points to the leading team’s score and no clock counting down the end of the game. But, with an expiring shot clock still in play, Rice took the ball at the top of the key as players and coaches from the bench were yelling at him to shoot.

He took his time, maneuvering over to the left wing where a screen had been set up for him from Tyler Lydon, a teammate he started practicing with just a week ago. Rice heaved an attempt high over the defender who got past Lydon, and the ball hugged the top right corner of the backboard before dropping in the net.

Rice shrugged in awe of his own shot, as the former BC star propelled a group of mostly Syracuse alumni into the second round of the tournament.

“Guys are still getting used to each other,” head coach Jeremy Pope said. “Early on we had to settle in, and we got guys going in the third and fourth quarter to win the game.”

Despite a late seven-point deficit against No. 14 seed Forces of Seoul, Boeheim’s Army came back in the fourth quarter to secure a 65-53 first-round victory. Out of Boeheim’s Army’s variety of new faces, Rice shined with a team-high 20 points and one assist.

Syracuse’s alumni team, Boeheim’s Army, has been on the search for a winning formula in The Basketball Tournament for the past three seasons. Two seasons ago, the team took an approach other college alumni teams have done in the past and added non-Syracuse player Jordan Crawford to the roster. But the 2019 change in strategy didn’t help, as Syracuse and BA’s infamous 2-3 zone failed in an 84-72 regional final loss.

Last season, the No. 3 seed squad improved on the previous year, making its way closer to the $1 million tourney prize with a new markup of players. But the team failed to meet expectations again in a 65-48 upset loss by No. 22 Sideline Cancer.

In 2021, with the No. 3 seed again, Boeheim’s Army all-time leading scorer Eric Devendorf said they have a “target on their back” after picking up more non-Syracuse-related players than ever before. BA added youth to its head coaching position, hiring University of Portland assistant coach Jeremy Pope in place of Ryan Blackwell. 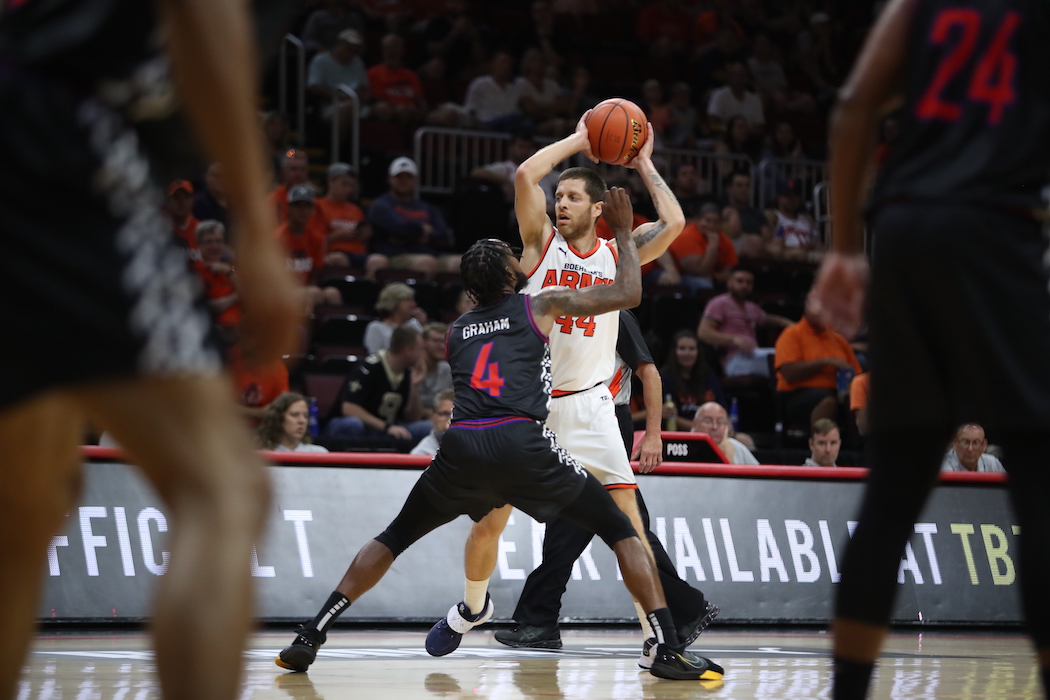 Despite not starting, Eric Devendorf came off the bench for 6:08 minutes and notched 2 points for Boeheim’s Army. Courtesy of Cole Cooper

With the new changes, Boeheim’s Army opened quickly on the offensive end, creating open shots for Malachi Richardson at the wing. On BA’s opening possession, Richardson came off a back screen from Lydon before knocking down a three-pointer in open space. After a layup from Rice, Richardson scored again off the same setup, this time from the left wing.

However, Boeheim’s Army early offensive success was offset by struggles with the 2-3 zone. Pope’s version of Boeheim’s Army defensive setup stems from his time as a graduate assistant under former Syracuse assistant coach Mike Hopkins at the University of Washington.

“When Hopkins took it to Washington, he revamped it himself. He was really tactical and technical with the setup,” Pope said. “I’ve seen it change and mold depending on who we’re playing against.”

Through a string of passes on the first possession of the second half, Forces of Seoul forced Syracuse’s back three defenders to shift away from their normal positions. D.J. Kennedy in particular moved out of his position as Kevin Galloway made his way to the left corner. Galloway pump-faked and went to the left block to bank a floater into the basket.

Despite sporadic strong defensive plays, like a steal from Devendorf at the end of the first quarter, Boeheim’s Army was unable to create any offensive output on the other end. Pope said BA struggled with making some of the easy baskets inside the paint as well as points in transition. By the end of the opening quarter, Boeheim’s Army shot 31.6% percent from the field.

“You could tell by the way we started people were having jitters, missing layups or easy buckets that we expected to make,” Pope said.

Specifically, Kennedy’s absence from the offensive end was felt throughout the game by Boeheim’s Army. As a former MVP of the TBT and two-time winner of the tournament, Kennedy was expected to take the offensive load for this game. But Kennedy finished with just three points, shooting 1-for-6 from the field.

In the second half, Rice, another one of management’s additions to “make sure (they) had the best team possible,” propelled Boeheim’s Army back into the game. He received an open attempt off a screen from Lydon at the top of the key following an incidental contact call.

Guys are still getting used to each other. Early on we had to settle in, and we got guys going in the third and fourth quarter to win the game.

On his shot, Rice fouled as the ball hit the backboard and sank in for a three-point play. On the next play, Rice used Lydon again, this time positioning himself deep behind the wing on an inbound pass. In three steps, Rice made his way to three steps behind the three-point line before making an attempt to bring Boeheim’s Army to within three.

Forces of Seoul attempted to respond to Rice’s three with Galloway at the top of the key. But as Galloway tried to get separation from the zone, Rice swiped the ball out of his hands before sprinting the other way. With one defender on his tail, Rice contorted his hand to pass the ball behind his shoulder to a cutting Richardson.

Richardson hit the layup, and the free throw attempt as he was fouled by Rice’s defender and tied the game up with six minutes left in the third quarter. The two teams continued to fight back and forth with each going on more than five-point stretches late in the game.

But as BA had switched out of its 2-3 zone to play man-to-man, Forces of Seoul’s offense started to sputter. Boeheim’s Army went on an 8-0 run to come within a point of finishing the game after taking a 53-52 lead in the fourth quarter because of the defensive change.

During that run, the last four points came off baskets from Rice, and the last was no different. Rice stationed himself at the top of the key, reading the defense in order to envision his next move.

While most of his baskets had come from either wing, Rice moved towards the left corner of the court for an attempt. Boeheim’s Army only needed one basket in the paint, and Forces of Seoul didn’t expect Rice to take a shot from three. He did, swishing on the final basket of the game, sending his team to the second round of the tournament.

The post 4th quarter push catapults Boeheim’s Army to victory over Forces of Seoul, 65-53 appeared first on The Daily Orange.