At 1-9 and playing No. 2 Notre Dame as their final opponent, the Orange saw Saturday afternoon’s game in South Bend, Indiana as their Super Bowl. SU’s defense came out against the unbeaten Fighting Irish and played its best 25 minutes of the season, holding ND to three points.

But in the final five minutes of the first half, the Orange unraveled with a critical penalty and a turnover, allowing 21 points and trailing by 17 headed into the break. Any chance the Orange had of pulling off a historic upset had vanished, and SU finished the 2020 season with one lone victory.

One costly penalty changed the course of the game

Syracuse’s defensive line dominated the early portions of the game. Notre Dame ranked near the top of the country in rushing efficiency and offensive line yards, but the Orange’s defense stuffed early runs and attacked quarterback Ian Book.

On one third down midway through the second quarter, interior pressure forced Book to his right. The quarterback fired incomplete, and the Orange appeared to have yet another third down stop. But as defensive end Kingsley Jonathan put his hands up to block Book’s pass, he followed through and hit the quarterback on the facemask for a 15-yard penalty.

Notre Dame was in the end zone three plays after the penalty, marking the start of five of the worst minutes of SU’s season. The Fighting Irish forced a fumble and scored before getting a stop and scoring again. In less than five minutes, Notre Dame scored 21 points.

Penalties have been a recurring issue all year for the Orange, as they’ve been near the top of the nation in penalties per game each of the last two seasons. Dino Babers has said he understands when underclassmen make mental errors on penalties, but he gets frustrated when upperclassmen make them.

Syracuse entered Saturday’s game as the fourth-worst third-down offense in the country. The Orange were 35-of-139 at extending drives in their opening 10 games, or 25.18%, less than half the rate of the nation’s top teams.

The Orange had their best third-down game of the season against the second-best defense they’ve faced all season. Syracuse sent freshman running back Sean Tucker out of the backfield for two conversions in the opening quarter. Rex Culpepper first hit him on the right sideline in stride to convert. Notre Dame blitzed Culpepper on a later conversion, but no one picked up the running back out of the backfield, and he sprung a 37-yard catch and run. The Orange brought Chris Elmore to help block on a 3rd-and-1 run, which they easily converted.

The Orange reverted to old ways in the second half, as they often were caught behind the chains and couldn’t produce any big plays when they needed them. Syracuse finished the game 5-of-14 on third down in total after going 0-of-5 in the second half. 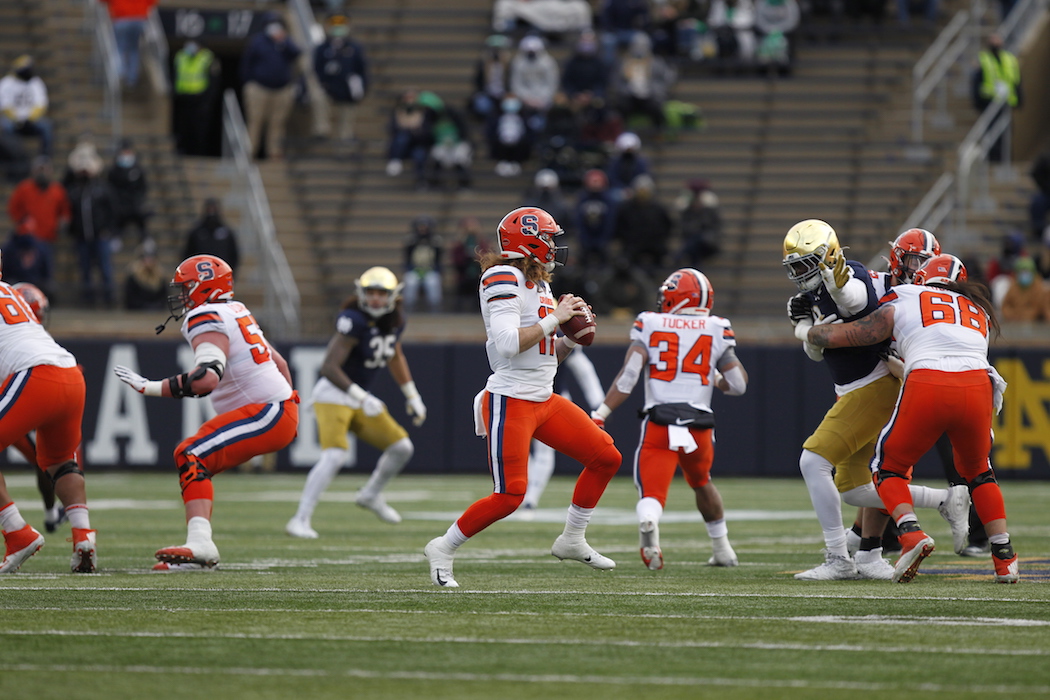 Syracuse was 5-of-9 on third down in the first half. Courtesy of ACC

Culpepper turnovers doom the Orange’s chances at an upset, again

Though fans will remember the 2020 season for the Orange’s poor record, Syracuse was within one score of both top-five Clemson and Notre Dame in the third and second quarters of those games, respectively.

Against Clemson, Culpepper’s fumble was returned for a Tigers touchdown to extend the lead to two scores. On Saturday, the Orange had just conceded a touchdown and the lead with four minutes to go in the half. At worst, Syracuse needed to stay within a score at the break by running the clock down.

Culpepper scrambled to his right, and as he was tackled, the ball leapt out. Video review was inconclusive, and Notre Dame took the ball and scored on the next play. Instead of a one-score game, ND led 17-7. They’d score again before the end of the half.

Culpepper turned the ball over two more times in the second half, one on a fumble in the backfield and another on an interception, where he threw the ball to the dropping Irish cornerback.

The fumble led to seven Notre Dame points, right after the Orange had cut the deficit to 24-14. It ended any chance of the Orange pulling a miraculous upset, much like Culpepper’s two second-half interceptions in Clemson helped the Tigers pull away.