Less than two hours before the game, the Orange released a statement that said that a player within the team had tested positive for COVID-19, and multiple team members were unavailable due to contract tracing.

While the rest of the Orange’s main players were out and warming up, junior guard Buddy Boeheim was not present and didn’t play. Even without him, Syracuse (2-0) had no problems scoring points against Niagara (0-1) on Thursday night in the Carrier Dome, as the Orange rolled to their second-consecutive win, 75-45.

Syracuse used a 24-2 run in the opening half to extend to a 22-point lead, before the Purple Eagles cut it to 14 before halftime. The Orange’s defense then completely stifled the Purple Eagles in the second half, holding them to 17 points in the frame.

Here are three takeaways from the Orange’s second-straight win:

Quincy Guerrier spoke with the media on Tuesday and said that he’s encouraged to shoot 3-pointers more often this season. Guerrier made three 3s on 25 attempts in the entire 2019-20 season, but he was the Orange’s best player on Thursday. Not only did the sophomore make his lone 3-point attempt, but he had a double-double within three minutes of the start of the second half.

In total, Guerrier totaled 23 points and 13 rebounds. He used the pump fake to easily get past a Niagara defender for an easy lay-in in the first half, and then scored his first two points of the second half on a weak side offensive rebound and putback layup. Guerrier scored on all five of his first-half attempts.

Guerrier’s development into a solid rebounding and scoring presence on the inside without Bourama Sidibe will be critical as the Orange’s opponents’ increase in both size and quality. On Thursday night, he showed the promise that many had for him last season as a freshman.

“Move your feet better, quicker than the tall guys,” Guerrier said of rebounding. “That’s the advantage for me…I just need to move my feet faster and use my physicality and my athleticism to get the rebound.”

Because Buddy wasn’t available and Sidibe was out injured with a torn meniscus, Syracuse’s depth was tested on Thursday night. Freshman Kadary Richmond only played a few minutes in the Orange’s season-opening win against Bryant, but he started in Buddy’s place at the top of the 2-3 zone on Thursday.

Woody Newton was the first player to appear off the bench for Syracuse, along with Robert Braswell in the later portions of the opening frame. While Newton didn’t log that many minutes until the game was all but decided — he had five first half minutes — the freshman got to the line on two separate occasions and did not hesitate to shoot and make a three when he had the opening in the first half.

Boeheim has said that he’s only going to play people who he thinks can help the Orange. With Buddy’s status now uncertain for the next two games against Rider and Rutgers, Boeheim may have no choice but to go deeper into his bench. And for Richmond, that means a potential second start against Rider on Saturday night.

Yet even without Sidibe, backup centers Frank Anselem and Jesse Edwards saw almost no time in the blowout win against the Purple Eagles. Marek Dolezaj did not leave the game in the opening 30 minutes.

Boeheim said after Bryant that the Orange could have gotten more minutes for Edwards and Anselem if the game was less close. But in a less close game, they barely saw any action.

“There was never a doubt, if we could’ve had an easier first game, which sometimes you have, the centers would’ve gotten some time,” Boeheim said last Friday.

In the game’s final minutes, John Bol Ajak, a redshirt freshman, made his debut off the bench before Anselem entered the game. 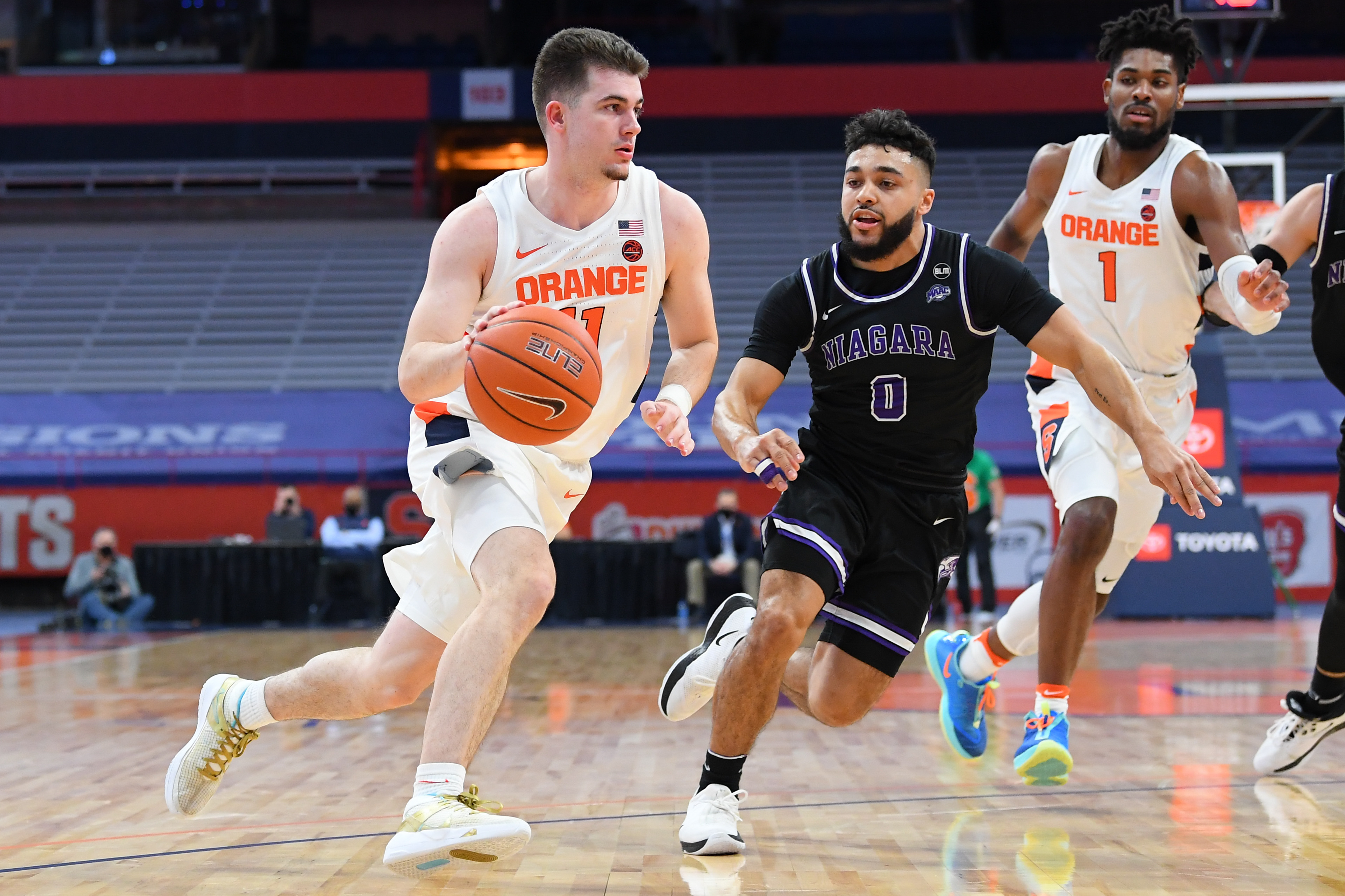 Joe Girard finished 3-of-11 from the field and 1-of-6 from 3 on Thursday night. Courtesy of Rich Barnes, USA Today Sports

Joe Girard has another disappointing night on offense

Joe Girard had the worst game of his Syracuse career in the opening game of the season on Friday, and Boeheim stuck by him down the stretch of the close game. The decision paid off, as Girard hit consecutive critical shots to secure the victory for the Orange.

Girard finished the opening game 2-of-14 from the field and 2-of-9 from 3-point. On Thursday night, his shooting was not any better. Girard finished 3-of-11 from the field and 1-of-6 from beyond the arc. He had just eight points and was pulled from the game with five minutes to go as the game was already decided. Boeheim said after the Bryant game that he thought Girard would improve going forward.

“We need these next few days to get back in rhythm,” Boeheim said after Friday night. “It’’s the worst I’ve ever seen Joe Girard play and I’m confident that he won’t play like that again. We’ll learn from this.”

Girard shined in his freshman season and has gained noticeable muscle in his upper body, but the sophomore point guard has not been effective for the Orange on offense in the first two games against inferior competition. As opponent quality improves and conference play nears, Girard still has time to refine his form, and the Orange will need him to help replace Elijah Hughes’ offensive production from last season.

The post 3 takeaways from Syracuse’s commanding 75-45 win against Niagara appeared first on The Daily Orange.