Syracuse hasn’t trailed in two straight games, as the Orange (3-0) took care of Rider (0-1) from wire-to-wire Saturday night. SU blitzed Rider from 3, tying a program record by making 15 of 30 3-pointers.

Rider, who lost its top-five scorers from last year and was picked to finish last in the Metro Atlantic Athletic Conference in a preseason coaches poll, was defeated by an SU team using the game as a tune-up for more challenging matchups ahead.

Here are three observations from Syracuse’s 87-52 win over Rider:

For the first time this season, Alan Griffin scored 20 points, which he did just once at Illinois. He started the game by nailing his first four 3-point attempts.

Griffin and Joseph Girard III shot Rider out of its 2-3 zone defense quickly. After Rider saw him knock down four triples, Griffin took what the defense gave him, pump-and-driving to the basket either for himself or finding teammates. When a Rider defender cut him off two dribbles into his drive, Griffin turned to his right shoulder and lifted for a fadeaway 17-footer that swished through.

He finished with 23 points — one shy of his career-high — and a career-high five assists. He sunk eight of his 11 field goals and turned the ball over just once.

Before Saturday, Griffin was almost strictly a catch-and-shoot player. Expanding his game into more of a playmaking role will be a “work in progress,” Boeheim said after the Niagara game, but it’s what he came to Syracuse for. He proved that wasn’t misguided on Saturday.

Kadary Richmond’s quick movements on closeouts and activity at the top of the zone also helped prevent Rider from forming any 3-point rhythm, which Bryant used on Syracuse last week. 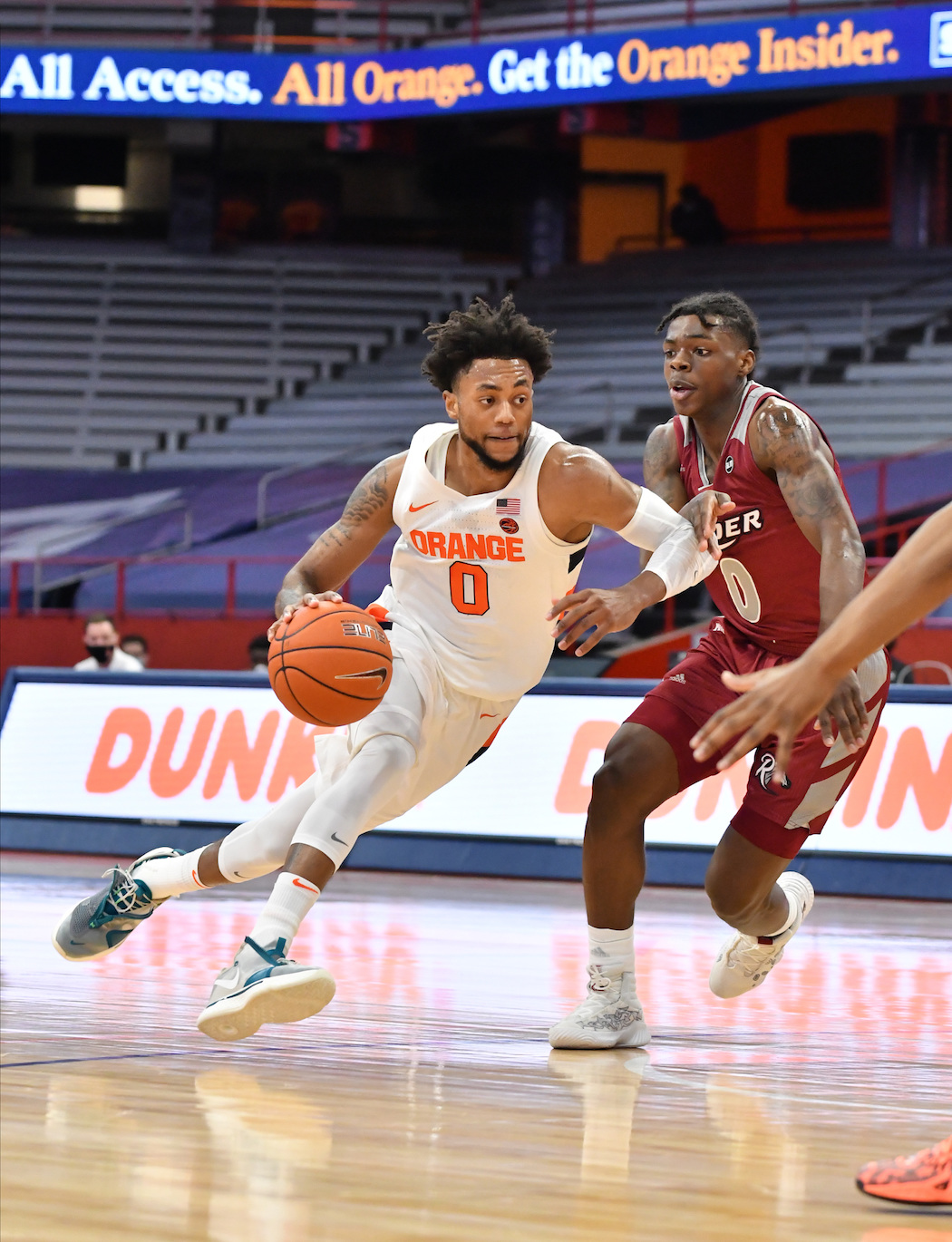 In his third game after transferring from Illinois, Alan Griffin led the Orange in points (23). Courtesy of Mark Konezny | USA Today Sports

Joseph Girard III gets on track

Girard entered Saturday’s game shooting 3-for-15 from deep. The lack of practice appeared to hurt his shooting rhythm, but Rider presented a fantastic opportunity to rediscover his rhythm.

“Everybody misses shots,” Boeheim said postgame. “It’s not a concern. He’s been making shots since he was in sixth grade.”

He took advantage of the chance, drilling three 3s in the first half and six of 12 overall. Off a Griffin dribble-drive and kick, Girard faked a shot to get his matchup off his feet, took one dribble to his right and fired. That’s tough to do, and it’s an impressive example of his decision-making and balance.

The most telling sign that Girard has regained some confidence came with about two minutes left in the first half. He curled off a Jesse Edwards screen at the top of the key, squared himself with perfect 1-2 footwork and rose for a 3 — his fourth of the night. A more hesitant shooter may have taken a dribble or tried to attack the rim, but Girard’s never been one for insecurity on offense.

But Girard was far from perfect. He missed at least one wide-open look from 3 and coughed up five turnovers — something Boeheim said wasn’t concerning. One potentially troubling note, though, is Girard missed a free throw, something he also did against Niagara. Girard, who shot 89% from the foul stripe last year, is 4-for-6 to start 2020. 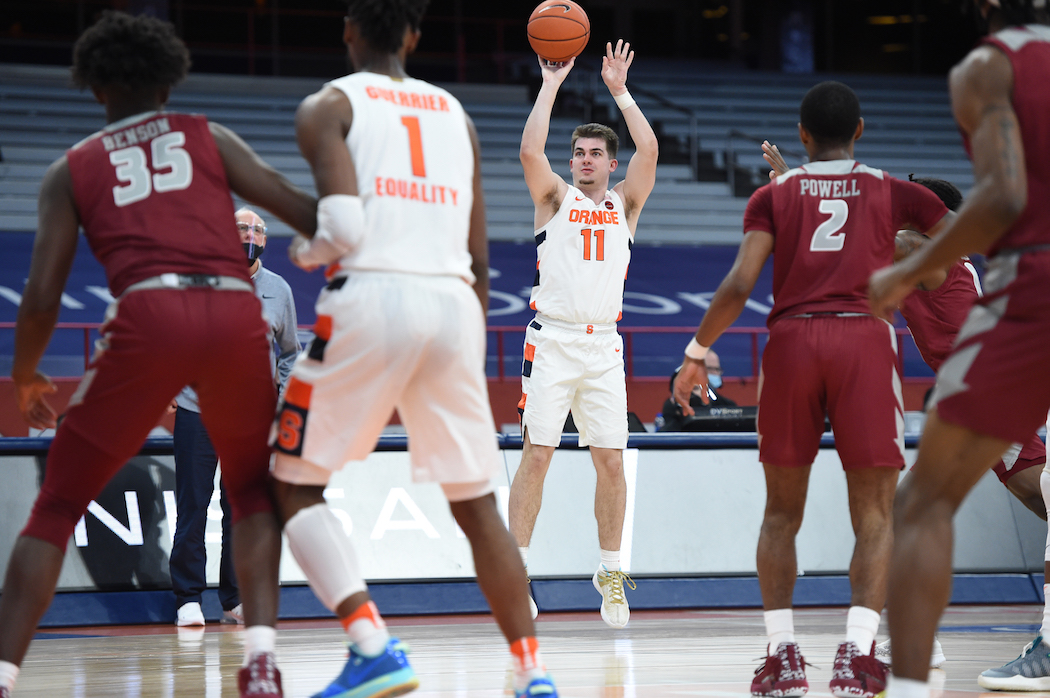 Joseph Girard III had 21 points, SU’s second-most against Rider, in his first breakout game of the 2020 season. Courtesy of Dennis Nett | Syracuse.com

John Bol Ajak was the first center off the bench for Syracuse, followed by Edwards. Neither center separated themselves in a major way.

Bol Ajak fumbled a nice dump-off pass from Griffin and traveled. Edwards recorded one rebound in five minutes. Freshman Frank Anselem got some second half run and slammed a beautiful interior bounce pass from Bol Ajak in garbage time.

Marek Dolezaj played fantastic on both ends, but the other centers recorded 8 points, 3 rebound a 2 turnovers in 23 combined minutes.

The Orange need Edwards, Anselem or Bol Ajak to prove they can play real minutes in the next few weeks as Bourama Sidibe remains out with a torn meniscus. Based on athleticism alone, Anselem may have the most potential of the three. Boeheim even hinted at that in his postgame press conference, saying he was “encouraged” with Anselem’s late-game activity.

“I thought he really moved well, he surprised me,” Boeheim said. “He hasn’t been that good in practice, but he was good in the game. Sometimes guys show up and play a little bit better in the game than you might think.”

The post 3 takeaways from Syracuse’s 87-52 blowout win over Rider appeared first on The Daily Orange.