Syracuse (1-9, 1-8 Atlantic Coast) lost 36-29 to NC State (7-3, 6-3 ACC) in an empty Carrier Dome on Senior Day. The Orange relied on defense and special teams in the first half, forcing a safety and returning a kickoff in the touchdown. The offense sputtered in the second half, only totaling seven first downs and seven points.

A late drive that could’ve tied the game ended in a Rex Culpepper spike on fourth down. Here are three takeaways from the game:

The pass defense, considered the strength of the Orange coming into the year, has been shredded in recent weeks. Opponents have totaled over 200 yards in each of the last five weeks, including 250 against Wake Forest, who had only done so three times before facing SU.

It’s often not the outside corners that prevents receivers from reaching their routes before the pass rush can reach the quarterback, as Garrett Williams and Ifeatu Melifonwu are stout in press coverage. Instead, the freshman safeties and defensive backs — Ja’Had Carter, Aman Greenwood and Rob Hanna — have struggled in man-to-man coverage.

Bailey Hockman picked apart Syracuse’s inside defensive backs, totaling 313 yards and four scores. He picked on Williams for a 39-yard gain to Devin Carter and on Melifonwu for a jump ball touchdown to Emeka Emezie. But Emezie, who leads the Wolfpack in receiving, was shadowed by Melifonwu and limited to 33 yards.

Instead, it was slot receiver Thayer Thomas who routinely dashed past Greenwood, Adrian Cole and Hanna. His corner routes, curls and crossing routes were rarely covered, and his nine catches, 102 yards and three touchdowns led NC State. A supposed strength became a weakness.

The pass rush from Syracuse was a weak point early in the year as the Orange only tallied 13 sacks through the first nine weeks. After sacking the quarterback five times in the first two weeks, Syracuse had eight over the next six games. The loss of Andre Cisco and Trill Williams may have played a role in this, as the opposing quarterback had to wait longer to find open receivers.

But it was the true freshman Marlowe Wax who shined, hitting Hockman often and sacking him twice. He also tallied four tackles and one for a loss. In the second quarter, he pushed away the NC State left tackle and wrapped up Hockman, who threw the ball backward for a safety.

The Orange, in its seniors’ last game, had six sacks, its highest total of the season. 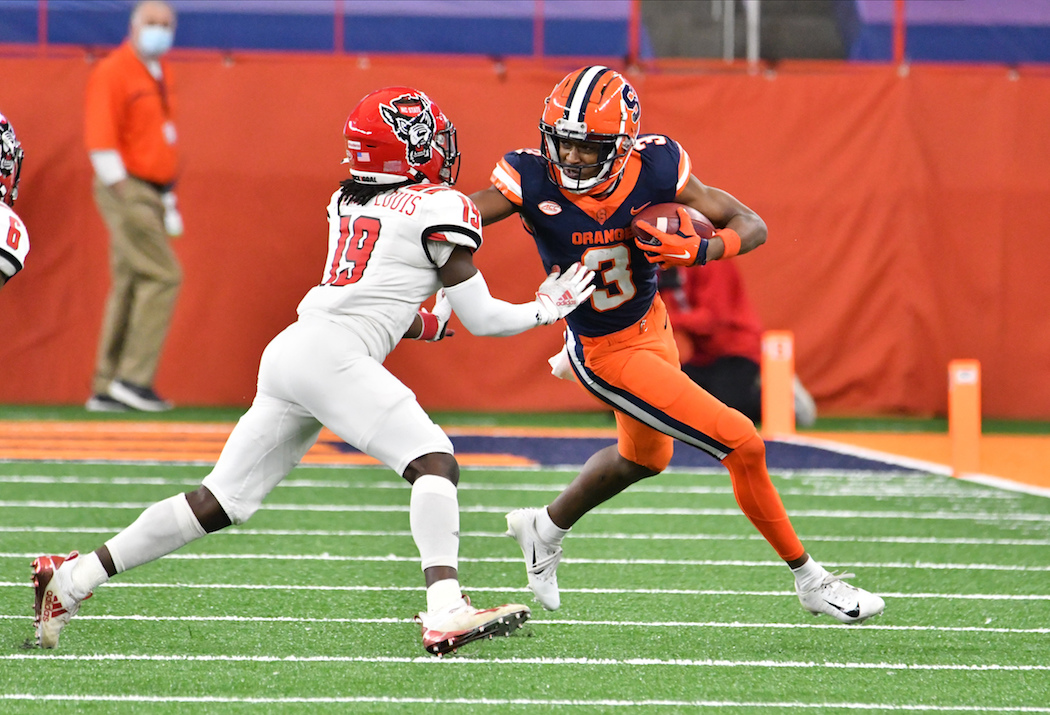 Taj Harris had only 87 yards receiving after he was suspended for the Clemson game. His seven-catch game against Boston College was sandwiched by a three-catch performance against Wake Forest and only one catch against Louisville. But any questions regarding whether Anthony Queeley had surpassed Harris and had become the No. 1 receiver were answered against NC State.

Harris totaled a career-high 13 catches for 146 yards. His countless third-down conversions kept drives alive, including one in the third quarter where he turned a low throw on a third-and-long into a 20 yard gain. Harris later caught a slant route for a 13-yard score.

It’s a welcome sign for the receiver, who appeared to be falling off offensive coordinator Sterlin Gilbert’s radar. Heading into what may be his final year in Orange, Harris had perhaps his best day in the Carrier Dome.

The post 3 takeaways from Syracuse’s 36-29 loss to NC State appeared first on The Daily Orange.