In Chapel Hill, it looked like Syracuse only wanted to attempt 3-pointers. Twenty-four of the Orange’s 36 first half field goals were from beyond the arc. The Orange finished the game with 36 3-point attempts. But, the shots just weren’t falling. Over and over, they clanked off the rim.

The Tar Heels will travel to the Carrier Dome in just two weeks, something head coach Quentin Hillsman said on Tuesday could’ve been beneficial if Syracuse won because the Orange can “retain what we’re doing this game” and carry it into the Dec. 31 rematch. Following Thursday’s loss, though, he’ll likely need to make some readjustments. Here are three takeaways from No. 18 Syracuse’s loss:

In the first quarter, Syracuse attempted 14 3-pointers and sunk only three of them. It took the Orange nearly four minutes to make their first basket, a 3 from Kiara Lewis, but that didn’t come before multiple missed shots from beyond the arc from Digna Strautmane, Kamilla Cardoso and Lewis.

Syracuse never recovered from its 21-9 first quarter deficit, trailing by as many as 20 points later down the stretch. Cardoso received a pass in the paint within the game’s first minute, but couldn’t turn and shoot through contact. She went to the line and missed both free throws, and the Orange struggled to connect with her for much of the remainder of the game. SU shot 54% from the free throw line.

Syracuse showed hustle, with Strautmane diving toward a loose ball in the first quarter and sliding through a folding chair along the UNC sideline, but defensively the Orange looked disjointed. The Tar Heels weaved the ball in and out of the paint, stringing together sequences of quick passes until they created separation from SU’s defenders and located wide-open shots.

Emily Engstler’s introduction three minutes into the game brought life to the Orange, who finished with a team-high 18 points along with 10 boards. In the second quarter, she intercepted a UNC pass and drove down the floor to finish through contact.

SU doesn’t fully capitalize on its size inside

Coming out of halftime, Tiana Mangakahia led the Orange up the floor, swinging the ball around the arc to Strautmane and Lewis. Amaya Finklea-Guity was in the paint with a couple of feet of separation from her defender, with both hands in the air. But instead of picking out the senior center, Lewis fired from more than five feet beyond the arc. The shot rattled off the back of the rim, and North Carolina grabbed the loose ball for the rebound.

Thursday night, that was the norm. Syracuse rarely challenged UNC’s starting center and preseason All-ACC selection Janelle Bailey. Instead, the Orange swung the ball around the arc, continuing to attempt deep 3s, often taking shots early on the shot clock.

It took 19 minutes for Cardoso to attempt her first shot. She finished with her first career double-double, 11 points and 13 boards, but was still largely uninvolved offensively until garbage time. Her counterpart, Bailey, put up 25 points and eight boards. 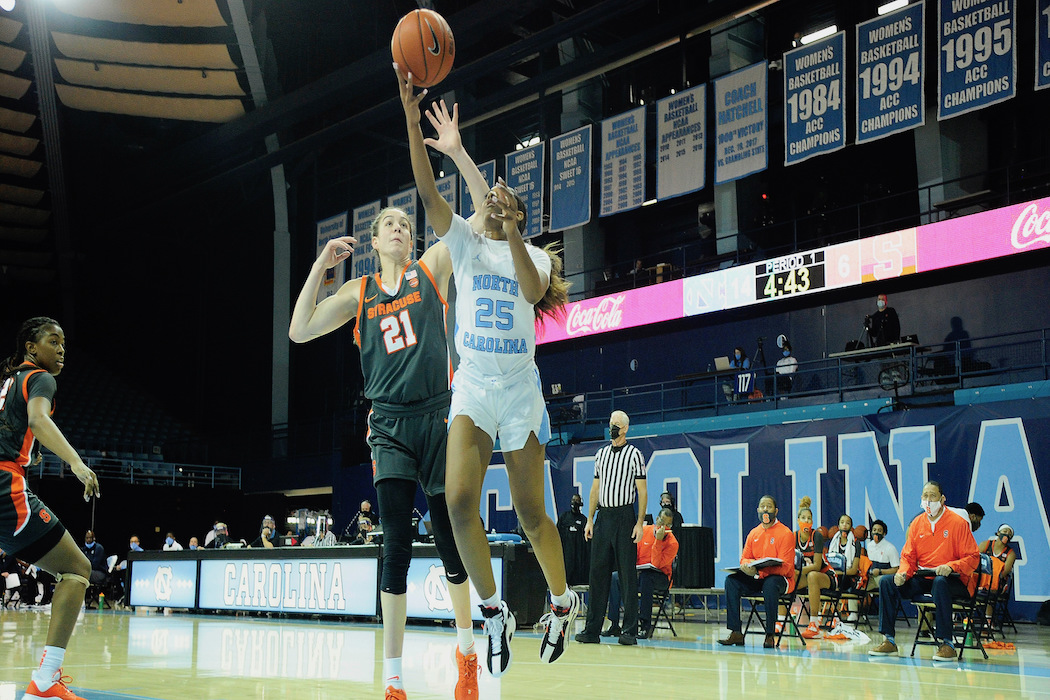 Syracuse never took a lead in its first loss this season.Courtesy of UNC Athletics

In the third quarter, she got up from her seat on the sideline, jogged up to Hillsman to exchange a couple of words, and then headed back to her spot on the bench. In the first half, she secured four rebounds for SU, and ran the floor on every Syracuse possession. But like Finklea-Guity, and Maeva Djaldi-Tabdi — who also played 16 minutes — Cardoso saw very little of the ball.

When the ball did find its way to the 6-foot-7 center, she attempted her usual shots from inside the paint, often through contact, and grabbed her own offensive rebounds for putbacks. Late in the game, Cardoso grew more involved, securing her own rebound three times before converting her fourth chance in the game’s dying minutes.

In the closing minute of the third quarter, Kiara Fisher drove inside, rounding the corner and beating her defender. The 5-foot-7 freshman seemed to have a good look for a layup and an easy two points, but she turned, pivoted, and swung the ball to Taleah Washington beyond the arc.

From the right corner, Washington fired, and then turned and jogged back in frustration. The shot from 3 had barely glanced off the outer rim.

Mangakahia hobbled off the court with two minutes remaining in Coral Gables with an injury to the bottom of her foot, according to Hillsman. Hillsman said Tuesday that Mangakahia hadn’t practiced yet, though he was optimistic she’d return for Thursday’s game in Chapel Hill — which she did.

He added that Mangakahia was “nagging me and bothering me every 20 minutes about playing” at practice, emphasizing that she was doing well mentally.

“There’s been no setbacks,” Hillsman said on Tuesday. “She looks a whole lot better, she’s moving. That’s half the battle. She wants to play, (so) I guess that’s the other half of the battle.”

But Thursday, Mangakahia had a largely unproductive game. She played 12 minutes of the opening 20 minutes, notching one of Syracuse’s two first half assists, a long, precise pass to pick out Cardoso in the UNC paint for an easy layup.

Mangakahia fired four 3-point attempts, sank one of them, and limited herself to only one turnover, which came via a misfired pass toward Cardoso on the game’s opening play. Mangakahia struggled with nine turnovers against Miami, and another nine against Penn State.

In Chapel Hill, she directed traffic as she carried the ball upcourt for the Orange, but she was largely quiet. Aside from carrying the ball upcourt in transition, and picking out initial passes, most often to Strautmane and Lewis, Mangakahia didn’t see much of the ball in Syracuse’s loss.

She checked out with four minutes remaining in the third quarter and didn’t return.

The post 3 takeaways from Syracuse’s 1st loss of the season against UNC, 92-68 appeared first on The Daily Orange.