In 2018, Syracuse opened up its season 4-4 through eight nonconference games including a loss to three then-top-25 ranked opponents in Brigham Young, University of Southern California and Marquette. As the Orange entered the middle of the season and began Atlantic Coast Conference competition, however, SU went 14-4 in conference play, going 8-1 at home and 6-3 on the road during that stretch. SU, who finished 19-9 that season, made its first appearance in the NCAA Tournament, advancing to the second round.

This season the Orange opened the year going 14-2, defeating 11 of 12 nonconference opponents, while sweeping the tournament fields at the Syracuse, Yale and Hail State Invitationals. To complete that stretch, Syracuse entered conference play 3-1 with wins against Duke, Wake Forest and Virginia Tech. But since then, SU has gone 1-7 in conference play and has been winless on the road.

Earlier in the season, the return of middle blocker Marina Markova and outside hitter Polina Shemanova — who were absent last spring — helped spark the SU attack and contributed to the strong start. In the first 16 games, SU outscored opponents 42-13 in sets, but in the midseason slump, it has been outscored 21-5.

In the past eight games, Syracuse has recorded a 22.2% hitting percentage and had its two worst hitting percentages of the season in matchups against Notre Dame and Louisville, hitting just over 10% in both games. Against the Fighting Irish, Syracuse was outscored by double digits in kills, assists, digs and errors in the game. 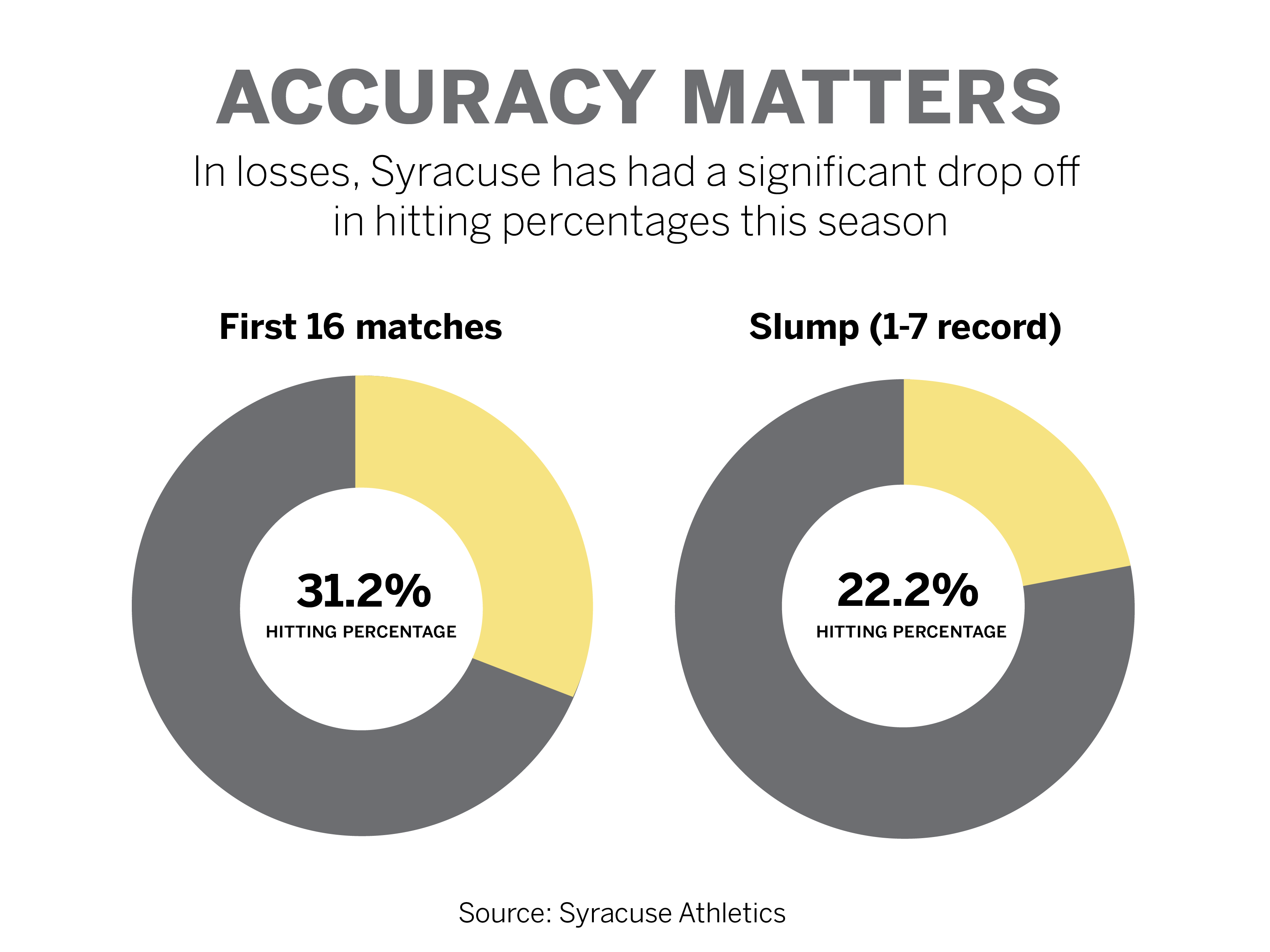 SU had 18 attack errors in its match against Notre Dame and followed that performance with 28 errors against Louisville two days later. Both matches ended in three sets. SU’s decrease in successful hits has resulted in lower hitting percentages, a flaw not prevalent in its first 16 matchups.

Inability to close out sets

In its matchup with Louisville, a Shemanova service ace put the Orange up 24-22 in the first set. But Cardinals recorded a kill and Viktoriia Lokhmanchuk had three straight attack errors, giving Louisville the set on a 4-0 run. In the second set, SU again had set point leading 24-23 after a Shemanova kill. But similar to the first, a Cardinal kill and a couple attack errors by the Orange won the set for Louisville on a 3-0 scoring run.

“It’s both physical and psychological problems,” Markova said about the inability to close sets. “We need to have more conditioning to have this energy to finish the sets. We need to believe more in ourselves to finish strong.”

Against Florida State, SU led in the second set 23-21, two points from tying the match at one set. But after three Seminole kills, a service ace finished off a 4-0 FSU scoring run. After the Orange responded with two set wins, it seemed SU was on its way to snap a three away-game losing streak as it led 9-5 in the final set. Instead, Florida State responded with a 10-2 run which included five kills, three SU errors and a service ace.

“We played good, but not long enough to win. There’s nothing else I can say,” Syracuse head coach Leonid Yelin said after the Orange’s loss to North Carolina.

Yelin’s remarks summarize the Orange’s inability to close out sets in the past eight games as they allow their opponent to pull away toward the end. Within just a few points toward the end of each set and even holding set points a couple of times, attack errors have prevented SU from being more competitive in games.

“I think it has to do with losing, but it’s true.” Yelin said after the loss to UNC. “When you’re losing — a few matches especially in a row — it’s just so hard to play to win.”

Although SU spent the entire month of September on the road with a difficult travel schedule, its nonconference competition and ACC opponents during the first 16 games weren’t the strongest. As expected, conference play was more difficult, as the Orange were scheduled to face four conference teams who qualified for the NCAA Tournament last year. Jackson State was its only nonconference opponent who qualified for the tournament.

Currently, SU ranks No. 44 based on the NCAA’s rating percentage index (RPI) as of games played through Oct 31.

The Orange’s opponents during the first 16 games had an average RPI ranking of just under 138, with No. 30 ranked Mississippi State and No. 39 ranked Ball State as the only competition higher than SU’s in the stretch. Syracuse’s losses were to Iowa State and Boston College, ranking No. 46 and No. 98, respectively. SU played five teams who’s RPI ranking is below 200, including Quinnipiac and Hartford, who ranked No. 294 and No. 301, respectively. 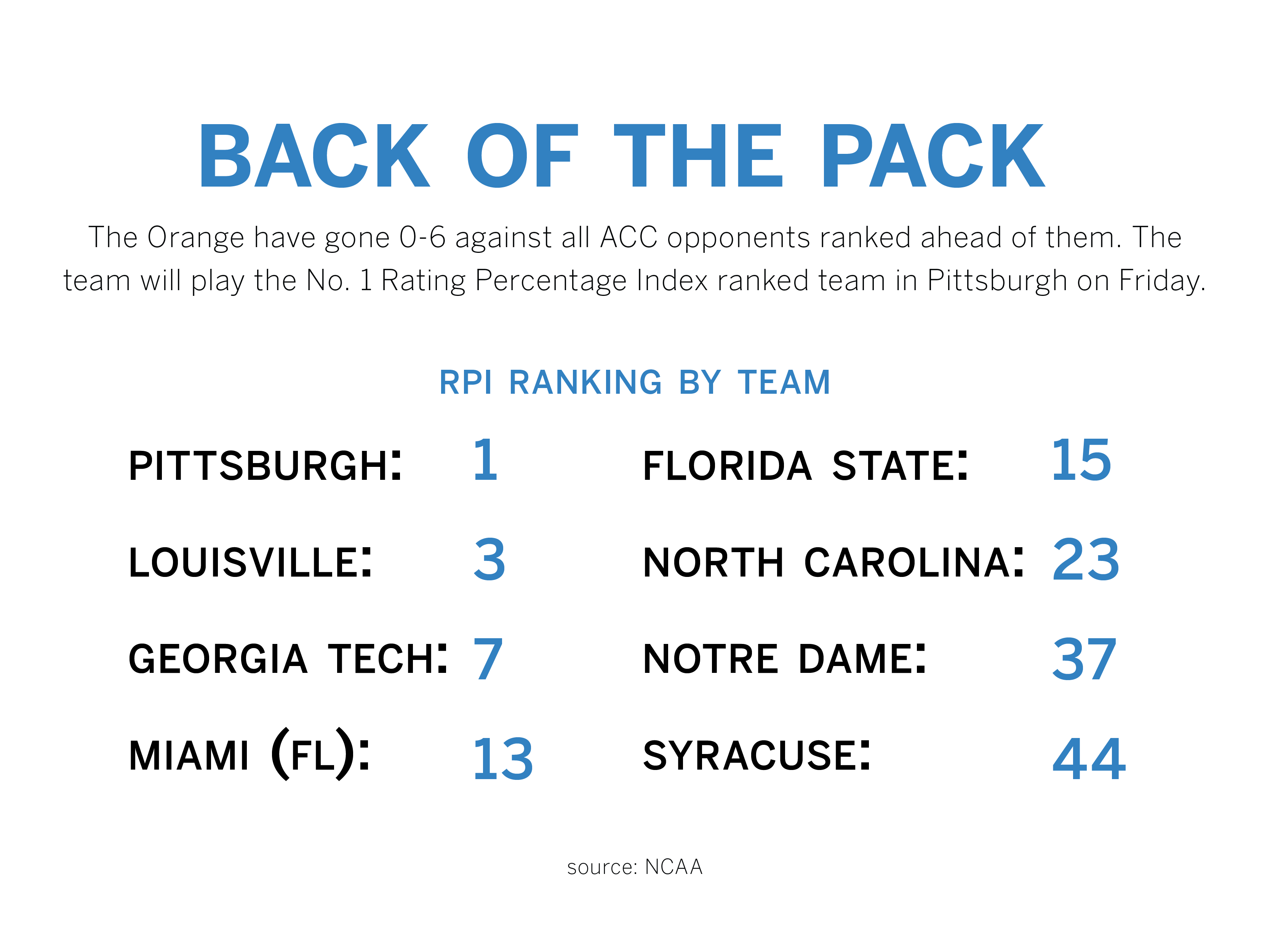 The following eight games were against conference opponents who’s RPI ranking averaged 39. Louisville, Georgia Tech, Miami, Florida State and North Carolina all rank in the top 25. The only win in the past eight games was against No. 122 ranked Clemson.

The final six games of SU’s schedule won’t get much easier. This Friday, it will travel to No. 1 Pittsburgh for the first of two matches before having to play Florida State and NC State for a second time — both teams who have previously defeated the Orange. Syracuse will also face Virginia and Duke. It defeated the Blue Devils on the road, 3-0, on Sep. 26.