In 2010, Syracuse clinched the Samford Tournament title after beating Northwestern State to go 6-0 on the season. The team won 17 straight games before falling to South Florida in its first loss of the season. That season was one of Syracuse’s best in recent history.

After a dismal 2020 season, Syracuse won its opening two tournaments to again get off to another 6-0 start. The Orange then followed it up going 2-1 in the Cy-Hawk tournament, bringing the team to eight wins, surpassing its 2020 season total.

With improved road play and additional depth, this year’s Syracuse team has addressed many of the problems it faced last season.

Here are three reasons why SU jumped out to a 8-1 start:

Last season, Syracuse played only Atlantic Coast Conference opponents — including four straight road matches against two top-10 opponents. Last year, Syracuse finished 74th in the NCAA women’s volleyball Rankings Per Index, which was sixth-best in the ACC. However, five of the teams the Orange played all ranked within the RPI’s top 30.

But this year, Syracuse was able to use nonconference games to adjust and build confidence as a team. Besides Albany, who ranked 35th last year, every other team SU played was ranked below 124, with Iowa being the lowest at 276.

“I definitely feel like (the nonconference schedule) gives us the chance to warm up,” middle blocker Abby Casiano said. “It kind of helps us get a feel of … what are our strengths, what are our weaknesses.”

In the 2020 season, the Orange finished 0-8 in away and neutral games compared to a 7-1 home record. In road games, SU struggled to place the ball on the opponent’s floor and had a .120 kill per rally average compared to a .258 average at home.
‘ 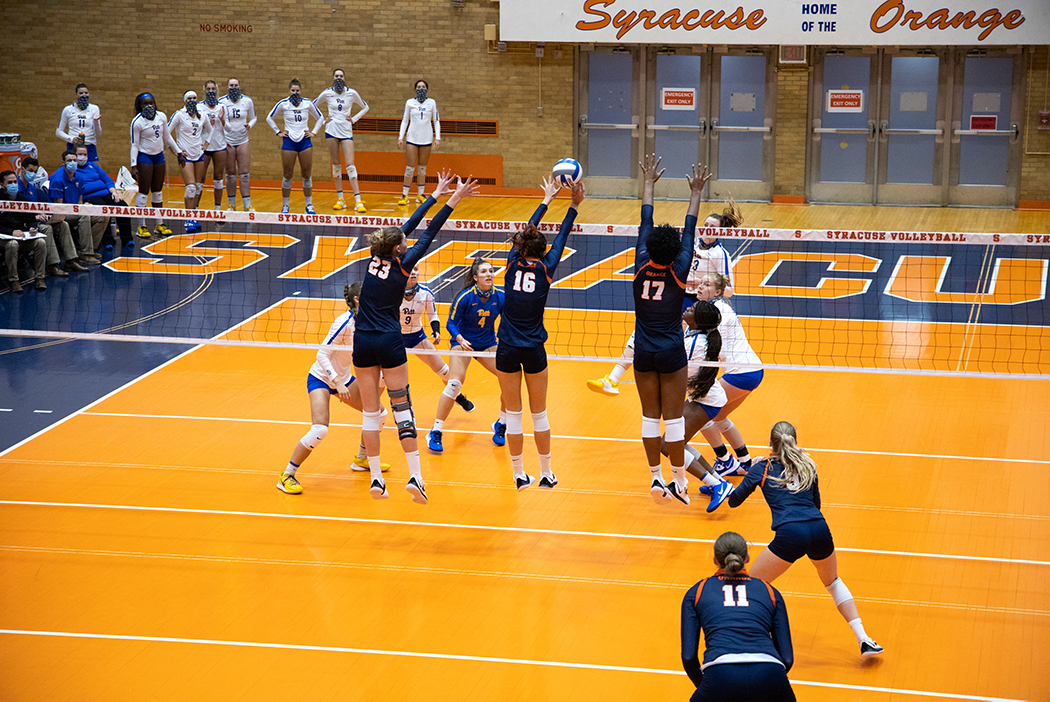 Syracuse finished 0-8 away from home last season, but have turned that around early in 2021. Sarah Lee | Senior Staff Photographer

This year, SU successfully completed its first road trip to New Haven, Connecticut, with three sweeps in the Yale Invitational, and then went 2-1 in Iowa for the Cy-Hawk tournament. So far, the Orange have a 5-1 away and neutral record — surpassing their winless record from last year.

There’s been almost no drop-off in kill average in road versus home games, showing Syracuse’s consistency so far this season The team also has a 20% higher kill per rally rate compared to their opponents when playing on the road, which was a 17% kill per rally difference in favor of opponents last year.

Even if away fans are at a game, there is an “energy difference” compared to last year when no fans were allowed in due to COVID-19 protocols, Casiano said. 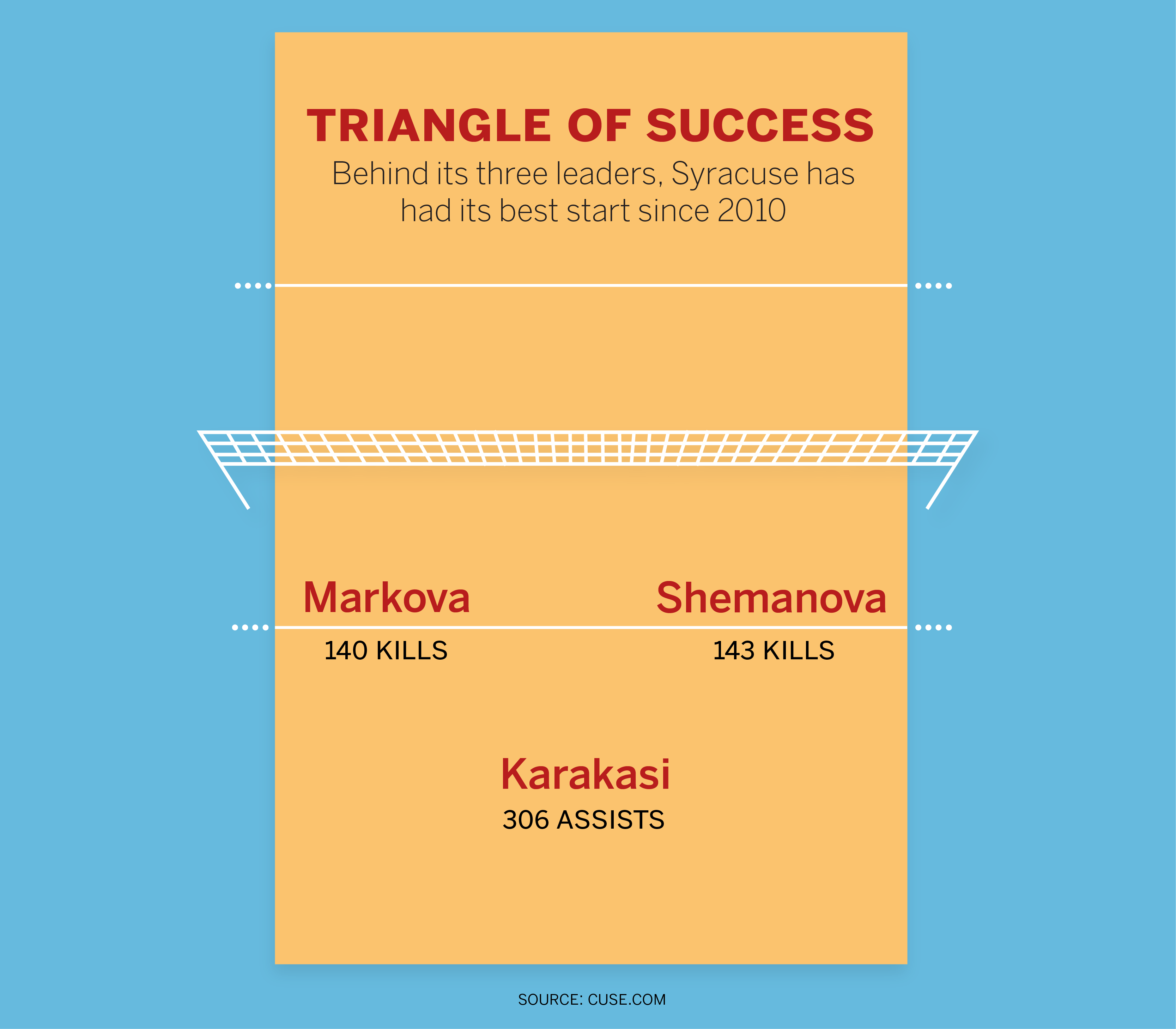 The Markova, Shemanova and Karakasi trio

Syracuse received much needed help up front from middle blocker Marina Markova and outside hitter Polina Shemanova. The two were inserted back into the lineup after arriving back in the U.S. from Russia after missing the spring portion of the 2020-21 season due to visa complications.

Last season, the Orange had five games where they were unable to get over 15 points in at least two sets. But with the trio of Markova, Shemanova and setter Elena Karakasi, the team has scored less than 21 points in a set only twice this season.

In nine games so far, Shemanova and Markova have combined for 283 kills for an average of 31.4 per game, which is slightly over a set worth of points per game. Markova was just named ACC Player of the Week and was able to notch a career-high 21 kills at Yale.

Head coach Leonid Yelin called Karakasi the “quarterback of the team” at the beginning of the season. In the season-opener against Buffalo, just over half (55%) of Karakasi’s 40 assists were to Shemanova or Markova — eight of them coming in the first set. She leads the team with 306 total assists, and the next closest player is freshman Peyton O’Brien with 43.

“We have new people. It’s a new season, and we’ve all improved,” Karakasi said of the team’s success. “The more we play together, the better we become.”