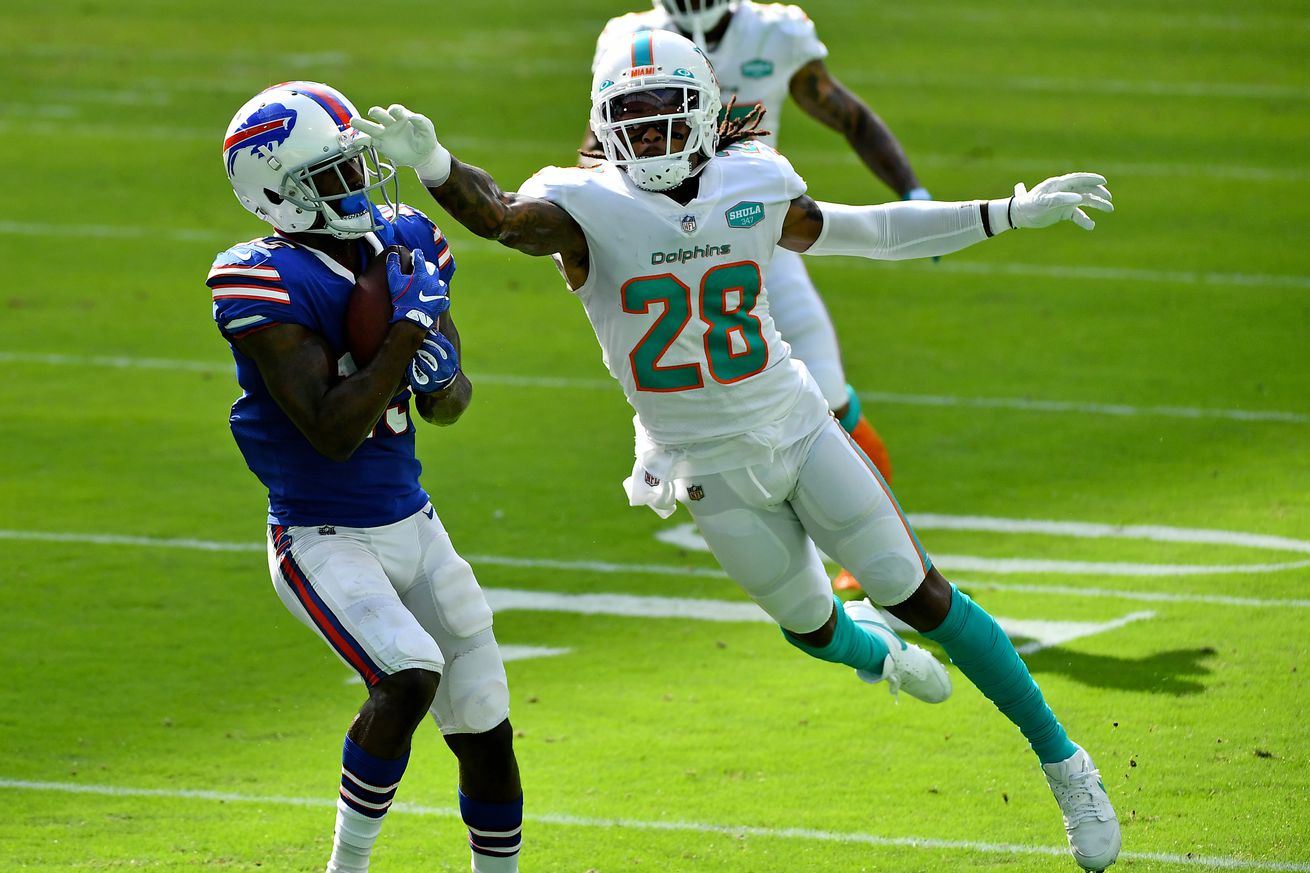 Win Probability (WP) is a number that represents a team’s chances of winning. It was originally created by Pro Football Reference (the OGs of advanced statistics) although there are some slightly different versions in use today. WP is determined by a formula that takes into account things such as team strength, current score, time left, field position, possession, and down & distance. Essentially, it creates a chart of how a team’s chances of winning ebb and flow (or peak and plummet) with the results from one play to the next. Each week, the WP of every NFL game are charted by numberFire and ESPN.

The Buffalo Bills’ victory over the Miami Dolphins will not be forgotten anytime soon, primarily because of the epic performance of Josh Allen. As time passes, the details of the emotional ride fans experienced during the game may become hazy as the memory of simply witnessing Allen’s spectacular performance is emphasized in fans’ memories.

A helpful summation of what the afternoon actually entailed is memorialized in the Win Probability charts coming out of the Bills vs. Dolphins match-up. Here is a terrific chart shared by Lee Sharpe of NFL Game Data.

First impressions of that win probability chart are twofold. First, there’s a lot of ups and downs, albeit the line mostly stays on the Bills’ side of things. Second, is how late in the game things swung Miami’s way the most it did all afternoon only to absolutely rocket back into Bills’ territory and trend that way until the clock runs out.

As stated in the intro to these pieces, there are several popular WP calculations available after each NFL game in 2020 including numberFire, ESPN, and NFLgamedata. Although Lee Sharpe provided a fun GIF to watch, ESPN actually showed the game being in 50/50 territory early in the second quarter with the game tied 7-7 and the Bills pinned deep in their own end starting a drive from their own 16.

Although ESPN considered the game a toss up at that point, fans probably felt more in line with numberFire’s perspective of things at that point, with them giving the Bills about a 62% chance of winning. After Week 1 and fans’ opinions of Josh Allen and the Bills’ offense overall trending up, even though the game was tied no one was panicking.

Then the Bills started to pull away with a TD to Stefon Diggs that almost no one saw live followed by a Tyler Bass field goal that gave the Bills a ten-point lead right before the two-minute warning in the first half and situating the Bills at an 87% WP according to ESPN and numberFire. The Dolphins closed the lead to seven with a field goal of their own right before the half but it only knocked the Bills down to about 79%.

Right about this time the feeling that the Dolphins were hanging around juuuuust within striking distance maybe started making Bills fans have flashbacks of past woulda-coulda-shoulda games that ended as a loss even though the win was there for the taking. Not every fan was feeling that way, surely, but most probably know the feeling.

Then came the real dramatics in the second half. The Dolphins closed the lead to four with another field goal, dropping the Bills WP from 75% to 62% according to ESPN but making no real difference according to numberFire as the Bills stayed right around 75% on their model.

Then comes the goal-line stand. Bills fans are on the edge of their seats hoping that control of the game doesn’t swing to Miami. According to ESPN, the Bills’ stand took them from a 62% WP to 70% while numberFire saw the game as essentially 50/50 with Miami at the Bills 1-yard line. After the turnover on downs the Bills skyrocketed in numberFire’s model from 50/50 to having a 76% WP! Now that seems to accurately represent the heart rate activity and endorphins Bills fans were navigating watching their defense stand tall.

However, the Bills give the ball back and then the Dolphins came down again and take the lead with Jordan Howard finding the end zone and giving Miami a 20-17 lead. ESPN put the game back in 50/50 territory while numberFire gave the Dolphins a 60% WP at that point. The Bills were behind for the first time with ten minutes left in the fourth quarter and some panic is setting in for fans.

To make matters worse, Mitch Morse was called for an illegal block to put the Bills in 1st & 20. Then Allen is sacked, so now its 2nd & 24 with Miami carrying a WP of anywhere from 57% to 64% with only nine minutes left in the game and Bills down three.

Allen finds Cole Beasley for a 24-yard gain and a new set of downs. +22% WP. Only a few plays later, rookie Gabriel Davis brings in an impossible diving catch to take back the lead and rocket the Bills to 72% or 77% WP.

The Dolphins’ next series sputters and with time rapidly running out, the Bills take their final possession with 80%-83% WP and less than 5 minutes to play.

And here’s where the champagne was popped. With 3 minutes left, Josh Allen fires a 46-yard-bomb to John Brown and seals the deal. The Bills comfortably sit at 99% WP up two scores with only 2-minutes-and-change left. Even Ryan Fitzpatrick’s garbage time touchdown doesn’t put a dent in WP, although many Bills fans were preparing to be stunned at somehow failing to recover the onside kick. WP had no such fears.