Update (4:02 p.m.): Sanders has since took to social media to refute the report made which state several former NFLers will be joining his staff:

THIS IS ABSOLUTELY WRONG! This is how junk gets started. Not a good way to get started with me. #CoachPrime WOW https://t.co/oybVbOoTSe

Owens has since personally stated on social media that he’s not going to be joining the coaching staff as of now. An updated report following the initial one made by 16 WAPT News in Jackson says an official coaching staff will be announced in October.

NFL Hall of Famer Deion Sanders already left his cushy job at NFL Network and evidently just wanted to hang out at Barstool Sports for a month because just this week, he took a college football coaching job.

Jackson State University in Mississippi, who played in the Southwestern Athletic Conference, has hired Sanders, better known as “Prime Time,” announcing that he’d become their new head football coach. In his introductory press conference, Sanders said he’s already had his coaching staff put together for months and among that grouping is a familiar name.

Another Hall of Famer and former Bills wide receiver in Terrell Owens is going to join Sanders’ staff to coach his former position, according to 16 WAPT News in Jackson: 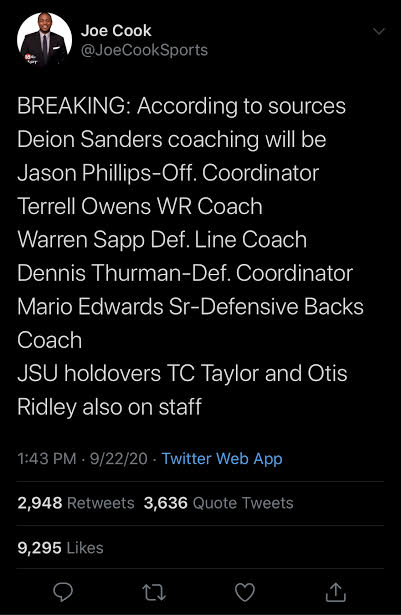 Sanders has coached Texas high school football in recent years, but has never led a college football program. Sanders did play for Florida State back in his day, though.

Despite their lack of college coaching experience, Sanders himself will be a huge pull for potential college recruits. Plenty of his assistant coaches will do the same, too. Along with Owens, there’s a couple of other notable names on Sanders’ staff, which also includes former Bills defensive coordinator (2015-2016) Dennis Thurman.

How Josh Allen responded to first mention of MVP conversation

The Morning After: Brace yourself, Josh Allen stans

Facts only: Bills QB Josh Allen leads the NFL in passing after 2 games