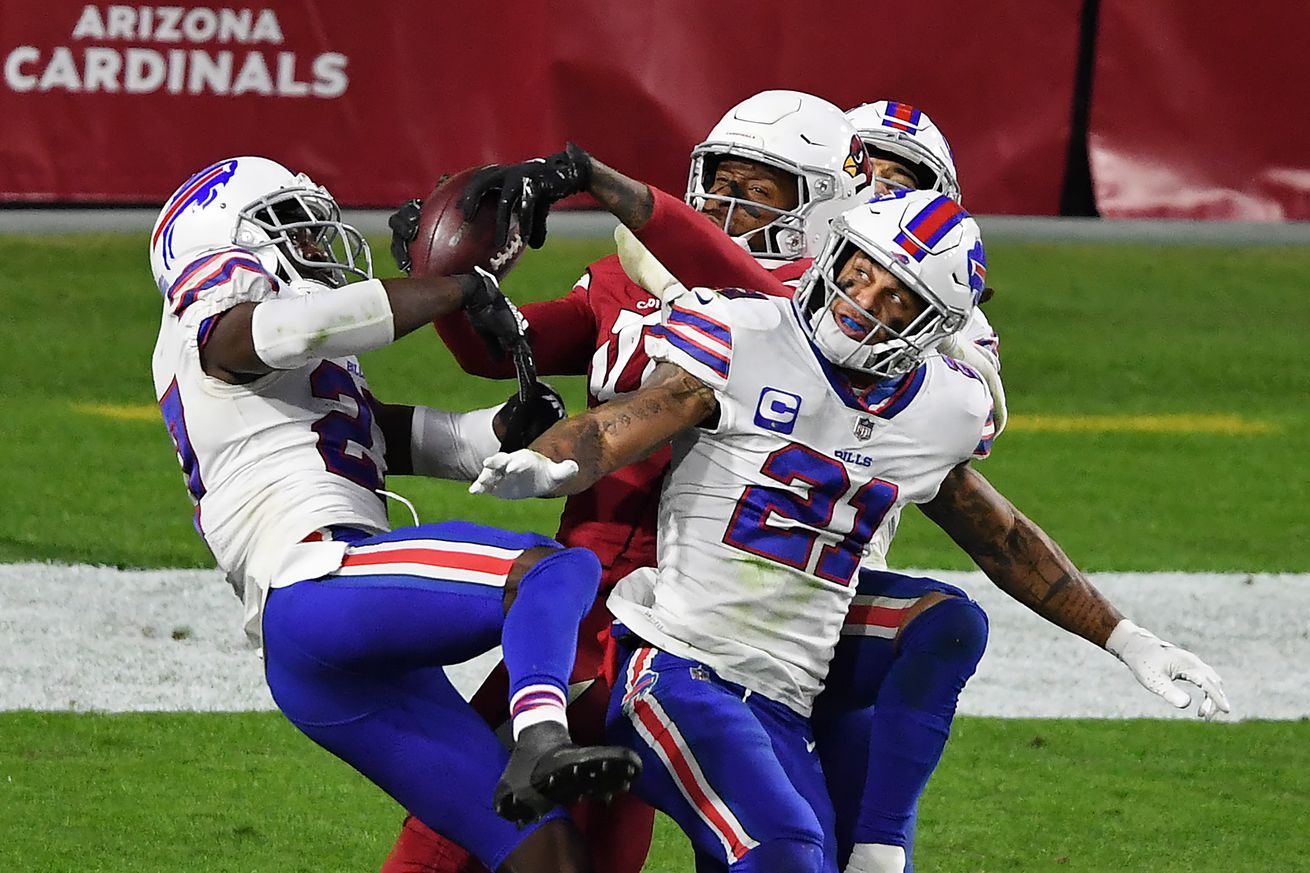 The Buffalo Bills lost a heartbreaker to the Arizona Cardinals on Sunday, 32-30. Buffalo heads into the bye week at 7-3. There were positives and more than a few negatives on Sunday, and it’s a long flight home for the Bills.

Here are my takeaways from the game:

What a throw, what a catch

Ok. So I wrote the above headline when Josh Allen found Stefon Diggs for the go-ahead score. It was a great touchdown on a great throw and a great catch. We shouldn’t gloss over that, but we kind of will and so will the rest of the NFL. Then the Cardinals had some time on the clock. No problem, there’s only 34 seconds. After a couple plays, with 11 seconds left, the Cardinals had a prayer. Kyler Murray chucked it to the end zone where Pro Bowler Micah Hyde, All-Pro Tre’Davious White, and should-be Pro Bowler Jordan Poyer were defending the pass. Somehow, DeAndre Hopkins came down with the ball as he high-pointed it. Cardinals win. What a play.

Allen gets away with two, but not three or four

Josh Allen got lucky on his first two interception-worthy passes against the Cardinals but didn’t stay that lucky as the game went on. Cornerback Patrick Peterson dropped two interceptions but didn’t let the third one hit the ground. Safety Dre Kirkpatrick picked off another pass. Allen was playing hero ball for a good chunk of the third quarter, and a prayer screen pass to Devin Singletary also was a bad decision. He needed to be better today when Corey Bojorquez was struggling and the defense was short-handed.

The second-year QB had one interception on a deflected pass. Other than that, he was effective all game. The Bills weren’t able to confuse him, and he threw a touchdown pass and ran for two more en route to 453 yards of offense for Arizona. Murray was responsible for 306 of them.

Three times in the first half, the Cardinals drove it into Bills territory. Three times Buffalo bent but didn’t break, holding Arizona to field goals. Again in the third quarter, after a 13-yard punt from Corey Bojorquez, the Bills bent but didn’t break. It was the same plan they used against the the Kansas City Chiefs and Seattle Seahawks, hoping their offense could score more points and it worked again, until it didn’t.

That’s why they kept Tyler Bass

Despite his early struggles and how good Stephen Hauschka was for the Bills over the years, this is why they went with the rookie. In the first half, he nailed kicks of 54, 55, and 58 yards and had the leg to make all of them from ten yards further.

At the end of the first half, head coach Sean McDermott called timeouts so Buffalo would get the ball back with a chance to score. The Cardinals obliged, throwing a few incompletes, and giving the ball back to the Bills with 1:24 left. The Bills drove it down to score as the clock expired. In the fourth quarter, the Bills got it back with 3:36 left and scored with 39 seconds left. We thought that was pretty good at the time.

Officially worried about the run game

There were only 35 yards from the running backs on Sunday. Zack Moss finished with 20 yards on 7 carries and Devin Singletary had 15 yards on 4 carries. That’s pretty darn terrible. At just 3.18 yards per carry, that’s not enough to keep defenses honest long term.

Last week, he built in a pop pass because Allen was running so much on the goal line and Seattle was waiting for it. This week, it’s the jet sweep pass back to the QB. With Isaiah McKenzie running so much jet sweep, and defenses responding and shutting down McKenzie, offensive coordinator Brian Daboll added a new wrinkle. It went for a touchdown and will be on film going forward.

Watch out for Miami

The 6-3 Miami Dolphins. With the 7-3 Buffalo Bills on a bye next week, the Dolphins could tie them for the lead in the AFC East with a win on Sunday. They play the Denver Broncos late on Sunday.