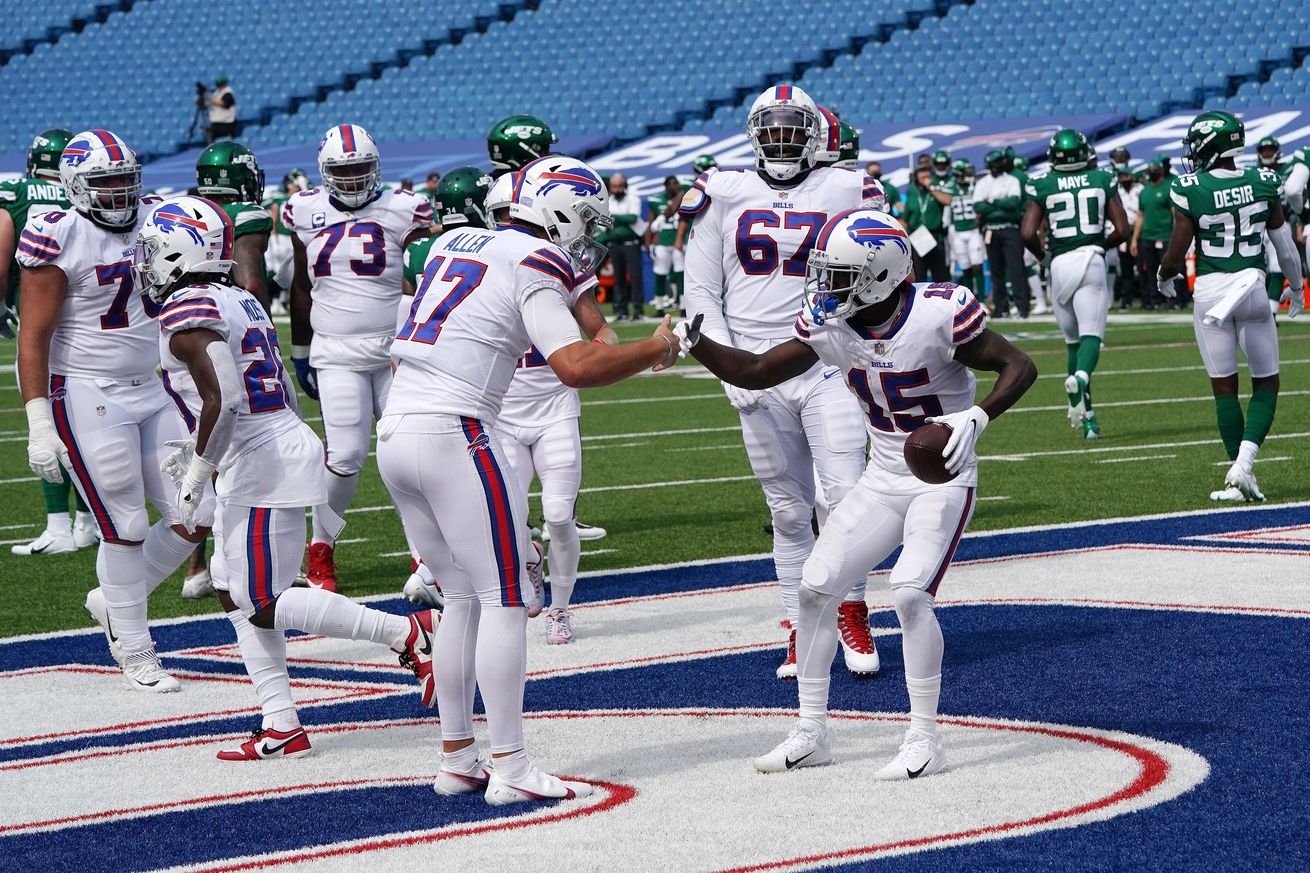 The Buffalo Bills finished off a solid Week 1 win that was never really in doubt on Sunday. The New York Jets were outclassed, though one big play and a few Bills miscues nearly got them back in it during the second half.

Here are my five takeaways from the game.

I liked this offense

The Bills moved the ball at will in the first half. The only thing that could stop them was a Josh Allen fumble (or two of them). Quick passes, designed QB runs, and a healthy dose of the screen game (welcome to 2020) allowed the Bills to tally two touchdowns and 107 yards on the three first-quarter drives. (All the yards were off the arm or feet of Allen, too.) At the half, they had 223 yards including 161 through the air. (Allen was responsible for 220 of those yards.) Ultimately they scored 27 points with four additional trips inside the 30 not resulting in points due to the fumbles and two missed field goals. They should have dropped 35 or 40 points on the Jets. (Allen finished with 300 passing yards for the first time in his career.)

He had eight fumbles in 12 games during his rookie year, 14 fumbles in 16 games last year, and now two fumbles in the first half against the Jets. Both of them were in field goal range, too, meaning the team left points on the board. That’s okay against the Jets, but not against the elite teams left on Buffalo’s schedule. No interceptions is good to see, but he needs to hold onto the football when he’s running.

In the first three drives, the Jets had nine plays and four yards. In the first quarter they managed just 23 yards. Only one drive in the first half lasted more than five plays. They had one big play, a 69-yard catch and run where Tremaine Edmunds was hurt. They didn’t score another touchdown until the game was out of reach with less than a minute remaining.

Tyler Bass should be concerned

The rookie didn’t look great in his NFL debut, missing two field goals* and even pushing both of his other attempts right but inside. (*Replay showed his first kick potentially inching inside the upright but it was called no good on the field and was not reviewable.) The Bills can’t be blowing scoring opportunities against good teams from 34 yards. Steven Hauschka is still a free agent…

The Bills were already pretty suspect with their linebacker depth being very inexperienced. Now their top four linebackers are sidelined. Matt Milano left the game before halftime an was ruled out fairly quickly. Tremaine Edmunds followed in the second half. Del’shawn Phillips was the first one down earlier in the game on a special teams injury. Tyrel Dodson left the game in the fourth quarter. Not great, Bob. Tyler Matakevich was probably champing at the bit to get in there. Buffalo does have some experience on their practice squad, where Andre Smith sits, but they may have to call in some more reinforcements. Vosean Joseph is a free agent after being released prior to final cutdowns, too.

What the heck, run game?

With the Bills’ offensive line at full strength, I expected the running game to be dominant in the second half after the Bills built a big lead. They weren’t. Just 41 yards on 18 carries from the two running backs is pretty lousy. (Allen had 57 yards and some of his runs were designed.) Maybe they miss having a fullback. Maybe it’s the rookie Zack Moss getting his footing. Maybe the Jets’ front four is just really good (they were missing their top linebackers). Whatever it was, they need to address this before the meat of their schedule.