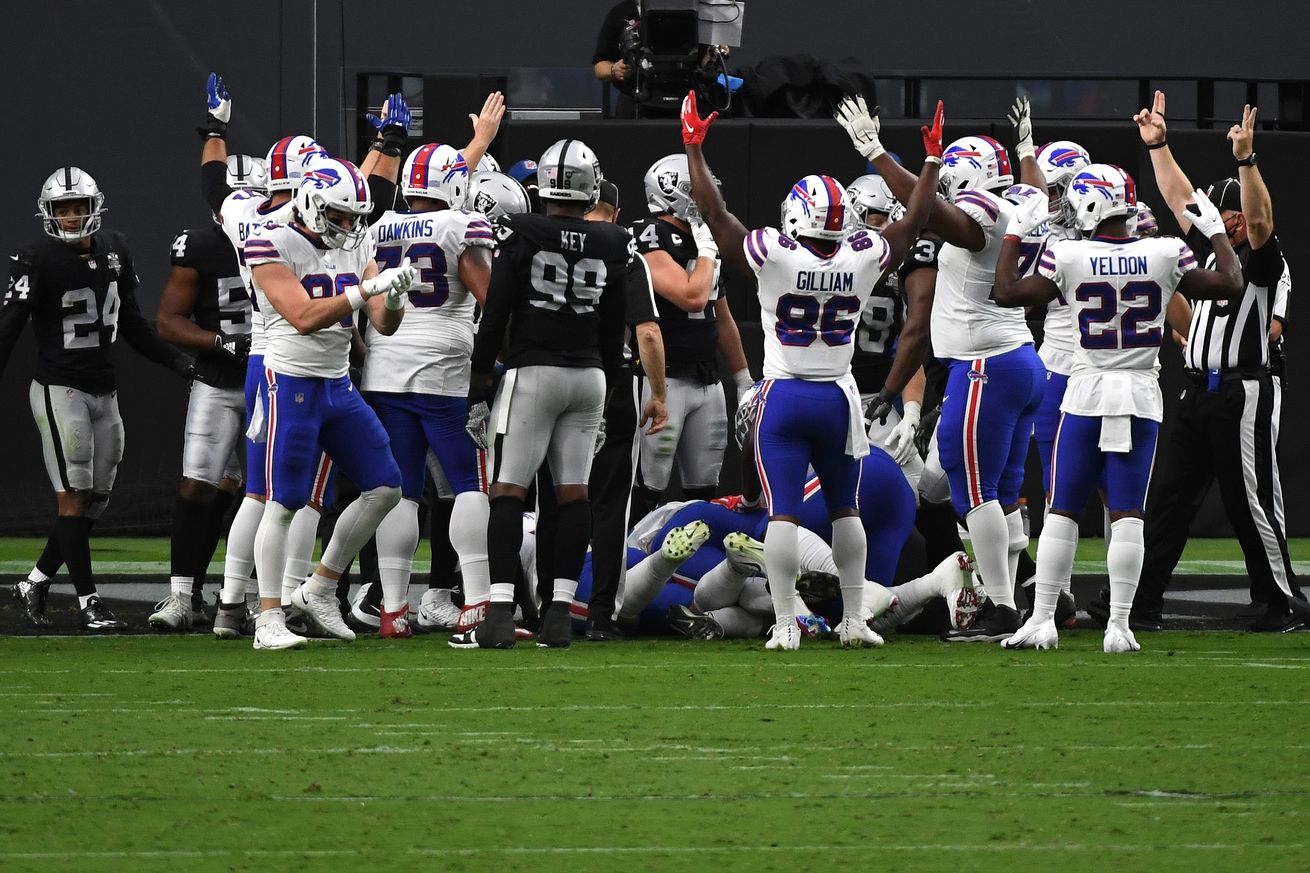 The Bills are making this look easy.

The Buffalo Bills put away the Las Vegas Raiders on Sunday to move to 4-0 and are in complete control of the AFC East. It wasn’t perfect, but it was a solid victory for the Bills. Here are my takeaways from the game:

The Bills are special

Normally I have my takeaways formulated by the end of the game. This week was more difficult. The Bills are just… good. They jumped out to another big lead. It didn’t really feel like the Raiders were going to close the gap. Josh Allen was overwhelming at the beginning of the game (another testament to offensive coordinator Brian Daboll’s game plan) and the entire offense was solid. The defense bent but didn’t break. Ho-hum. It’s been a long time since the expectation was a 300-yard passing game and a comfortable victory.

Norman was activated off of injured reserve for the game and head coach Sean McDermott planned on easing him into the lineup. When starting CB Levi Wallace went down with an injury early in the game, there was no such easing. Instead Norman put together a solid game as the CB2 and jump-started the Bills’ defensive stand of the second half with a strip-recovery. With 12:39 left in the game, Norman forced a big turnover as the Raiders were entering field goal range. On the next play, Josh Allen bombed it to Stefon Diggs for 49 yards before Devin Singletary took it in for the touchdown. Those points proved to be the game-winners.

Defensive line is a problem again

Quinton Jefferson had a strip-sack recovery in field goal range for the Raiders in the fourth quarter. Other than that, you’d be hard-pressed to think of a great play from the Bills’ defensive line. No consistent pressure on Carr. It’s been a problem all year and it’s going to catch up with them. For how much they’ve put into the DL this offseason in free agency and the draft, they need to be better up front.

Make it a three-score game, Josh

With 8 minutes left and a 14-point lead, the Buffalo Bills faced third down and 18 from the Vegas 28. Josh Allen dropped back, looked, looked some more, rolled backward, and was eventually sacked. In field goal range, the Bills lost 14 yards which led to a Corey Bojorquez punt. Throw it away, Josh. A field goal pretty much ends the game. Let Bass have the attempt.

Isaiah McKenzie proves his worth

At roster cutdown time, lots of folks were wondering if the Bills would keep Isaiah McKenzie. Through three games he had six catches for 70 yards and one rush for four yards. Against the Raiders, he got the first carry of the game and that went nowhere, but on 3rd and 13 in the first quarter, he took a crossing route and turned it into 18 yards. On fourth and 1 in the third quarter, he took the jet sweep handoff for 16 yards to set up the Bills in field goal range. Brian Daboll is using ALL of his receivers, and McKenzie is playing so well it’s keeping Lee Smith inactive.

Do you guys remember what it felt like when Allen went to the locker room? You felt like the whole season was gone. Allen threw for 288 yards today and scored three more TDs, and I’ll bet you thought it was just kind of… an okay day at the office. He’s a clear MVP candidate and you thought it was gone. I know I did. He is far outperforming my expectations for 2020.

There were a few times that the Raiders did some weird things as the clock wore on. On 4th and 2 from the Buffalo 7, the Raiders kicked a field goal in the third quarter to close the gap to 17-16. A one-score game became a one-score game. Inside two minutes left in the game, Derek Carr ran the ball to Buffalo’s 7-yard line to set up 3rd and 1 and Gruden called timeout with the Raiders down two scores. They knew they would have to get an onside kick or force a Bills punt/turnover to get two possessions to tie or win the game, and that timeout was the difference at the end. Especially when you know you’re going to go for it on fourth down, just get the play in. And that doesn’t include the fact that the dude does not know how to wear a mask.