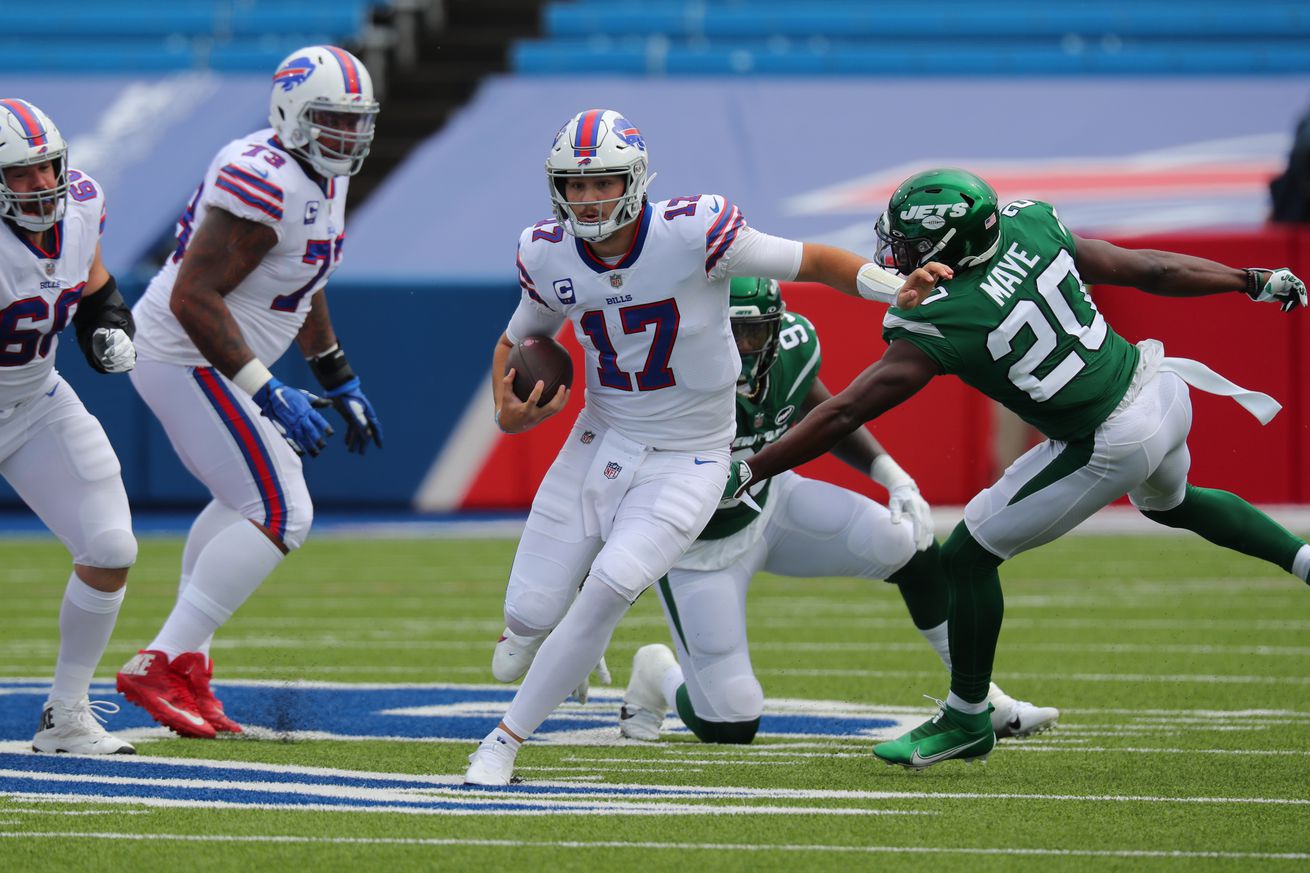 This week has seen lots of discussion about Allen’s chances of injury while running—let’s dive deep to find an answer.

There’s been a narrative floating around social media this week suggesting that Buffalo Bills quarterback Josh Allen shouldn’t run the ball so often because he could get injured.

Everyone’s entitled to their own opinion, but this is a straw man argument. Case in point: Former starting Bills QB Tyrod Taylor. Below I’ll outline not only why Josh is safe to run when he needs to, but that he is not at more risk by running than staying in the pocket like many prefer.

To help outline this argument, let’s look at the rushing statistics for both Allen and Taylor. We will look at Allen’s entire Bills career up to this point and look at Taylor’s Bills career from 2015-2017—Taylor’s most substantial playing time to this point in his career.

Breaking down the rushing statistics, Josh has run for more yards in a season than Tyrod with fewer attempts, resulting in a better yards-per-attempt metric. He also gets more yards after contact than Tyrod over each season consistently by a considerable margin.

Looking at Josh Allen’s career yards after contact, he’s at 3.2, Tyrod Taylor is at 2.4. If Allen can get that almost extra yard during each run despite getting hit, then it might change ideas around creating a designed run or throwing/punting.

To put the nail in the coffin, Taylor averaged 5.6 yards a carry, Allen has averaged 5.7 yards a tote. Essentially, Tyrod ran, got hit, and went down shortly after contact. Josh ran, got hit, and continued moving forward for almost an extra yard while still averaging slightly more on runs. Knowing that allows you to utilize multiple running plays rather than relying on open space to get the yards.

Interestingly enough, rushing attempts per game are nearly identical through the first two seasons of their respective Bills careers (Allen 5.9, Taylor 5.8). Week 1 of the 2020 season showed 14 runs for Josh which is an outlier. Allen did have 13 attempts in 2018 but other than that, none more than 10 attempts.

For Taylor, he had four games of ten rushes or more with 14 rushes as his career high in 2015 and 12 rushes as his second most in 2016—similar to what Josh Allen has produced over his career.

So we’ve established that the rushing statistics for Allen and Taylor are similar but with Allen being the more effective runner due to yardage and yards gained after contact.

“But he can still get injured despite being a rushing quarterback!” To that i’ll counter that he plays NFL football—he’s going to be injured at some point. But he’s at a lesser risk running than taking a sack or knockdown in the pocket.

John Verros over at Sports Info Solutions has produced some great research that shows how a running quarterback is less likely to suffer an injury compared to a traditional pocket quarterback when getting hit.

This isn’t saying that running isn’t a risk, but a mobile quarterback can anticipate some hits and his speed matched with a opposing defender’s speed can bounce off each other when hit, whereas a stationary quarterback in the pocket only absorbs the hit rather than dispersing the energy from the defender.

According to an article looking at NFL musculoskeletal injuries and concussions from 2012-2014, there are 12 quarterback injuries per 100 games and out of all positions, only 2.8% of all injuries occur to the position. This rate is only bested by kickers and punters (1.1%) when compared to all positions. So we know quarterbacks don’t get hurt a lot as compared to other positions. So once again, why are we worried about Josh Allen? He plays a position that suffers minimal injury in the first place, and one where additional measures have been put in place to keep quarterbacks on the field. It just gets more attention because quarterback is such an important position.

To dive even further in, check out the graph below that details quarterback injuries through 2019. To simplify it, the rate of injury for a quarterback knockdown or sack is far higher than a designed running play. A mobile quarterback is less likely to suffer an injury getting hit running than getting hit in the pocket. Those numbers simply don’t lie.

The chance to suffer an injury as a QB is one in every 236 plays. The numbers below speak for themselves on the risk based on running or in pocket. I’ll take the designed run all day or settle for a scramble if the play breaks down.

Thank you, Sarah! Here are the updates numbers through the 2019 season. pic.twitter.com/TYEvB75AGF

Verros has been tracking these metrics since 2017, so while it doesn’t have the injury rates from 2015-2016 as we are comparing Tyrod, the game hasn’t changed so much that it would drastically alter the information.

Going back to Allen versus Taylor, let’s look at the injury history for each player. Once again, taken from the above mentioned time frames. All injuries are taken from pro-football-reference.com and supported with news articles. Note: the probable designation was removed after the 2015 season.

2019: Concussion, Week 4, suffered out of pocket, missed no games

According to my records, Allen also suffered left and right ankle injuries in the pocket that did not show up on the injury report in 2019.

He also suffered a hand injury while in the pocket throwing the football during the Tennessee Titans game in 2019. This briefly showed up on the injury report last year but he practiced in full and was not in danger of missing any games.

Let’s also look at the size of Allen vs Taylor: 6’5” and 238 lbs vs 6’1” and 215 lbs. When someone as big as Allen is taking a hit from guys similar in size to him while moving, his size can absorb more contact whereas Tyrod being smaller, had a disadvantage simply due to the size and power of the players taking him down. This is evident with the yards-after-contact metric seen above. As soon as Tyrod got hit, he went down shortly after contact. Once Josh gets hit, he continues forward for almost another full yard compared to Taylor. Those yards add up over the course of a game.

Reviewing all the information, we have a bigger quarterback to absorb hits and still move forward. We also have a more efficient runner, overall fewer injuries, and an overall better athlete. It’s a slam dunk that Allen is a better passer than Taylor. Taylor may have been better at protecting the ball, but if you can’t move the ball in the first place and have to punt, what does it matter? Both also play a position where the injury rates are incredibly low, to begin with.

Why is it that Tyrod Taylor was lauded for his ability to scramble but Josh Allen is discouraged?

The only conclusion is that either most fans have recency bias with Josh having a concussion or they forget what Tyrod did. Another difference is that Tyrod was not widely viewed as a franchise quarterback and Josh currently is viewed as one. I chose the comparison between only Tyrod Taylor and Josh Allen specifically to highlight the Bills’ fan base’s irrational argument that Josh shouldn’t run.

If you weren’t worried about Tyrod, then you can’t worry about Josh. He’s going to get hurt. I believe a lot of fans think that Josh Allen isn’t allowed to get hurt. Football has a 100% injury risk. He’s a big boy, he knows what he signed up for and that he could get hurt.

The only run that I don’t agree with was when Allen hurdled Anthony Barr his rookie year. It had style points but he could have hurt himself jumping like that. But that’s ONE play and he hasn’t done that since. I can also agree that a quarterback doesn’t need to have 20-25 runs a game—leave that volume to the running backs.

But I can’t agree with the notion that a quarterback shouldn’t run at all. Sometimes plays break down and the quarterback sees an opening. Or the offense sees an opportunity to exploit a weakness in the defense with a designed run. Still design runs to maximize the effectiveness of the offense. Use them as necessary. Both still possess less injury risk than if he stays in the pocket to take a sack or knockdown waiting for a play to develop.

I believe that Josh wasn’t removed from play despite being up 21-0 during Week 1 due to the fact that he still needs live game reps to get ready for the season. Normal situations would call to remove starters to reduce injury risks. But this isn’t a normal season.

If you still think I’m wrong and convinced by staying in the pocket that Josh Allen won’t get hurt, then I ask you to look at Tom Brady (ACL), Carson Palmer (ACL), Andrew Luck (entire career), Alex Smith (leg fracture) and Tony Romo/Aaron Rodgers (collarbone fracture). All those players suffered significant injuries while in the pocket and were known more as pocket quarterbacks. Injuries occur outside the pocket too, but at a much lesser rate. If you think that Josh Allen can avoid injury by not rushing and staying in the pocket, so be it. But you’re wrong. The research doesn’t support it. I’d rather have a quarterback who can escape danger than be a sitting duck.

Some may argue that it’ll shorten the quarterback’s career. The joke is that NFL stands for not for long. My professional colleague Edwin Porras, DPT of Fantasy Points looked at this on a recent Twitter thread. He found the average career for rushing NFL QBs to be 13.5 years. That’s a lengthy career when you consider how many QBs flame out or simply don’t last because of talent. In the tweet below, you’ll see some familiar names. Make sure to check out the entire thread. He’s worth the follow.

The facts:
1. The most mobile NFL QBs in history played an average of 13 seasons
2. A majority of their injuries were non-contact
3. Athletic plays are what made them great
4. Lamar will likely be fine
5. Don’t be afraid if your QB pulls it down and runs every now & then
7/7

A rushing quarterback is not a higher injury risk. The data simply does not show it. If you supported Tyrod’s ability to run while the starting QB for Buffalo, then you should support Josh’s ability. In addition, Josh is simply a better runner & athlete. We’ve seen this already, but running the way he does gives his game an element that most other quarterbacks simply don’t have.

I believe this narrative can be put to bed. Let Josh Allen run because that’s what he does well and the Bills win games. I rest my case.