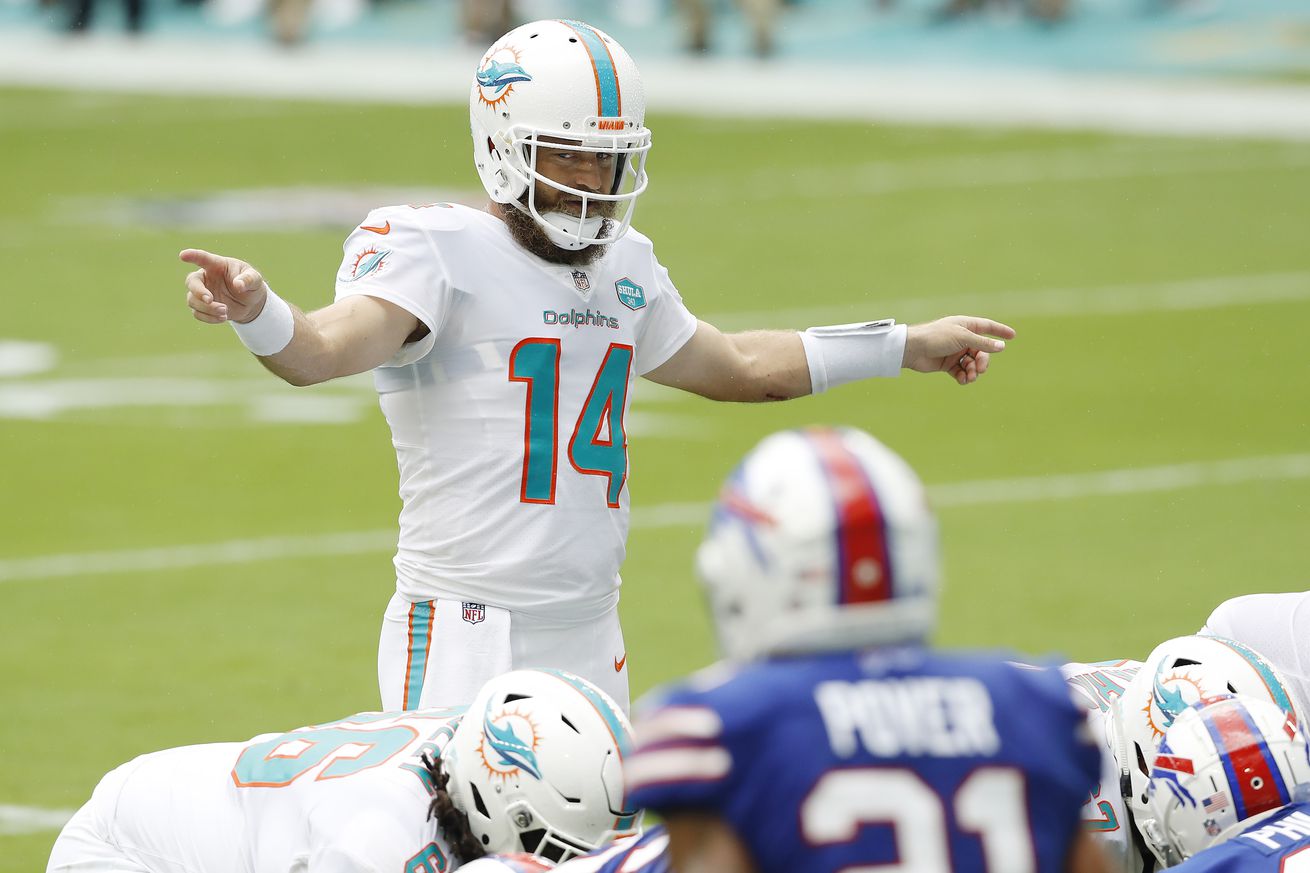 It’s not often that a team scores 28 points on the Buffalo Bills’ defense, at least recently, but that’s exactly what the Miami Dolphins did in a losing effort on Sunday. The Dolphins were able to punish Buffalo’s top-notch pass defense, exploiting the middle of the field that was left vulnerable due to Matt Milano and Tremaine Edmunds missing the game.

Which of our five players to watch for Miami performed? Quite a few of them were incredible, as one player had a career day.

We kept waiting for Fitz to throw that back-breaking interception but, instead, he kept surgically dissecting Buffalo’s porous zone defense. He found Levi Wallace early, and he continuously abused Buffalo’s second corner. Miami has two really big receivers, and Wallace played outside leverage and trusted that the linebackers would help him underneath. That help wasn’t there, and Wallace found himself chasing often. Fitzpatrick is just too smart to show the same zone to repeatedly, and he was excellent this week, completing 31-of-48 passes for 328 yards and two touchdowns. Fortunately for the Bills, a potential go-ahead touchdown pass on fourth and goal was dropped; otherwise, we might be talking about the great day that Buffalo’s former quarterback had rather than the career day Buffalo’s current quarterback, Josh Allen, had at the expense of Miami’s defense.

I assumed that Williams would draw Wallace, but that wasn’t the case early, as Buffalo did not have Tre’Davious White shadow DeVante Parker. Once Parker caught a touchdown pass, however, Buffalo started using White on Parker more often. Whether it was Wallace or White on the 6’5” Williams, Miami’s No. 2 wideout didn’t have a strong day. He caught one pass for 26 yards on five targets, and he was overshadowed by Parker and one other teammate.

The Penn State product had a career day, catching eight passes for 130 yards and a touchdown on 11 targets. The number of receptions was a career high, and it was Gesicki’s first career 100-yard receiving game, as well, and it came against one of the league’s best pass defenses. Granted, it was the perfect storm, as the two players who normally would be charged with stopping him in Matt Milano and Tremaine Edmunds were out due to injury, but Gesicki made some amazing catches and showed tremendous athleticism. He looked like a future Pro Bowl player this week.

The former first-round pick of the Bills didn’t do much, but nobody on Miami’s defense really did this week. Lawson had two assisted tackles and one quarterback hit on the afternoon, appearing on 51 snaps. It was the second straight week where he led Miami’s defensive ends in snaps, and it came this week even though he left temporarily with what looked like a cramp in either his hamstring or his glute.

Miami’s secondary is expensive, and they did a nice job against the New England Patriots and Cam Newton in Week 1. They were torched by Josh Allen and the Bills this weekend, allowing over 400 yards passing and four touchdowns. The Dolphins played man coverage for much of the day, and Allen picked them apart on crossing routes. He was able to beat Miami deep, to the middle, short, and to the sideline. Howard was the only of Miami’s starting outside corners to make it through the whole game, as Byron Jones left with a groin injury. Perhaps that had something to do with the level of dominance Allen showed, but Howard did not do much on Sunday to help his team win. Buffalo’s receivers consistently won the man-to-man battle.